The magazine “Piseagrama” injects criticism and creativity into the debate about public space in Brazilian cities, resulting in concrete action by citizens and exchange with initiatives from other places.

One could say that the last few years, in Brazil, have been marked by the emergence of movements that seek, besides understanding the city as a web of flows and functions, also to rethink the role of architecture nowadays. Created by members of the School of Architecture at the Federal University of Minas Gerais (EA-UFMG), in Belo Horizonte, the magazine Piseagrama (literally “Steponthegrass”) is one of these initiatives, which is generating a debate about urban space. Bringing together diverse perspectives on topics like access, neighborhood, leisure and self-government, the publication tries to expand the imagination of the citizen beyond his milieu, in other words, in the direction of the “other.” Dialogue, sharing and respect are notions present in the texts, which bring ideas and experiences from Brazil and the world, in order to take a fresh look at the public sphere in our cities.

Piseagrama “emerged in a context of a public notice issued by the Ministry of Culture, in 2010,” says Renata Marquez, professor and researcher at UFMG’s School of Architecture and one of the editors of the magazine. At the time, various manifestations of rescuing the public space flourished throughout the country, recalls Roberto Andrés, also professor and researcher at the School and editor of the publication. “Resuming street carnivals in Brazilian cities, the countless activist movements and social struggles arose at a time when the privatization of urban life was becoming more and more unbearable. Piseagrama emerged, expressly, at this time when Brazil was beginning to build a veritable public sphere,” says Andrés. 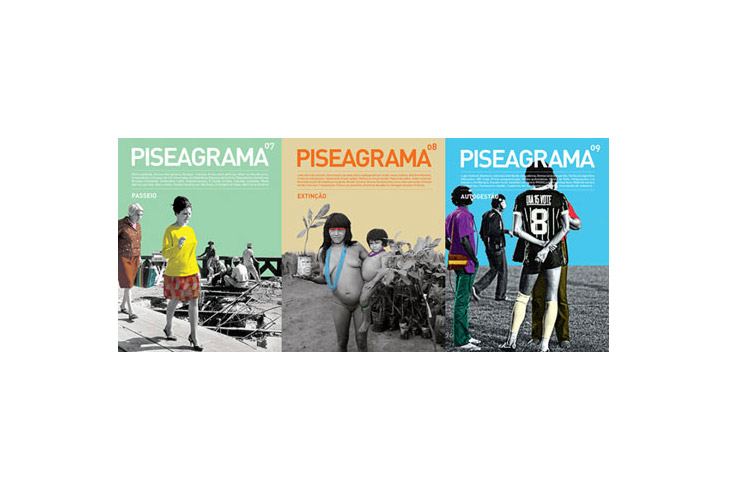 Launched in 2011, the semi-annual publication functions as a collaborative platform, which seeks to give voice to different practices, cultures, ideas and experiments, talking about public spaces of shared use in the cities and reflecting on the Brazilian context. “The idea was to discuss the notion of public in Brazil through various fields of knowledge, including art. We have tried to make a magazine with a language that is accessible, not academic, that anyone can read. We have published visual essays not as illustrations of the texts, but as conversations with them. The images as narratives, discourses, ideas,” Marquez explains.

More than a magazine

The magazine in dialogue with different groups has also given rise to activism in the streets. “Over time, we noticed that the magazine was a platform for research and activism, and we expanded to other publications (books), organizing seminars, urban interventions, curating exhibits and public campaigns,” Marquez adds. Street Carnival, Movies in the Backyard, The City We Want and Zero Fare public transport are some of the movements that came about in Belo Horizonte with which some of Piseagrama’s editors have a direct relationship. This diverse network, driven by common struggles, has had an impact on the imagination of citizens and contributed to a local policy generated by and for all. An example of this was the election, in 2016, of two candidates from The City We Want platform to the city council in Belo Horizonte – one of whom had the greatest number of votes in the municipal elections, and is a social scientist, educator and activist for minorities.

Beyond the academic world

It is undeniable that Piseagrama has contributed to the stimulation of critical thought and the political imagination at once inside and outside of academia. “I think the magazine has ultimately set a path for reflection, which frames and diversifies our work as professors. We take on the role and rather broad and interdisciplinary position of architects. This has a direct impact, daily, on the way we work at the School, in various arenas. I see this as an opening for activism and development on the part of the students,” Marquez observes.

Piseagrama as a research group, alongside others that have sprung up at EA-UFMG, like Cosmópolis, Living Indigenous Life and Experimental Cuisine, have a definite influence on the education of young architects. This is noticeable when observing the interaction inside the School, the increasing interests in everything to do with food, the critical reflection on architecture and urban life, the respect for different cultures. Everyone shares the dissatisfaction with public institutions and their unpopular decisions as well as the desire to invent and experiment with other ways of living and working, not only professionally, but also as responsible citizens.

The publication’s impacts are also observable beyond the School and the local context, Andrés notes: “So often messages come in from people from Macapá, Recife, São Paulo, Brasília, from Portugal, commenting on the importance of Piseagrama. A magazine offers the possibility for continuous intervention in the debate and we are beginning to learn how to manage this aspect. There is the time of the magazine and the time for people to absorb things, and often the impact is visible later, in different places and at different times,” the professor concludes.