Many inhabitants of Colombia’s capital hope to convert their mountains into places for conservation and recreation. The administration of the city is well intentioned, but in order to achieve its objective the role of private initiatives is central.

A piece of land full of trees of different species, rocky paths, fresh air, dew and natural noise: this scenario seems almost inconceivable in a city like Bogotá. With almost nine million inhabitants, the capital of Colombia has poor air quality and high levels of pollution. According to the World Health Organization, between twelve and fifteen square metres of green belt are required per person; Bogotá has five. And while it is calculated that the average number of particles per cubic metre of air should be 20 micrograms, in Bogotá over 300 have been recorded.

As a result of this and other factors – over 1.5 million private cars circulate in the city, for instance – the 54 kilometres of the eastern mountains surrounding Bogotá represent practically the last drop of water that many people are struggling to preserve in the middle of a desert. Organisations and public and private foundations alike have come up with projects that are not only designed to reforest the mountains with native plants, but also to encourage citizens to get to know these lands and take responsible possession of them. As stated by a community leader from the El Paraíso district in the vicinity of one of the mountains to the south-west of the city, there is no point in the local administration trying to impose conservation projects, such as the environmental circuit recommended by Peñalosa, the current mayor: “If we don’t involve the people in these projects and make the mountains an environmental lecture room that citizens can enjoy and that will benefit the districts adjacent to these lands, the initiatives won’t work.”

A reserve for opening horizons

Manuel Rodríguez has been looking after the Reserva Umbral Cultural Horizontes for 30 years. When he arrived, the land belonged to private owners who intended to erect buildings on it. The mayor’s office denied them permission and, according to Rodríguez, the property ended up becoming a problem and a huge expense for its owners. In 2013 they donated it to the Fundación Cerros de Bogotá (Mountains of Bogotá Foundation). 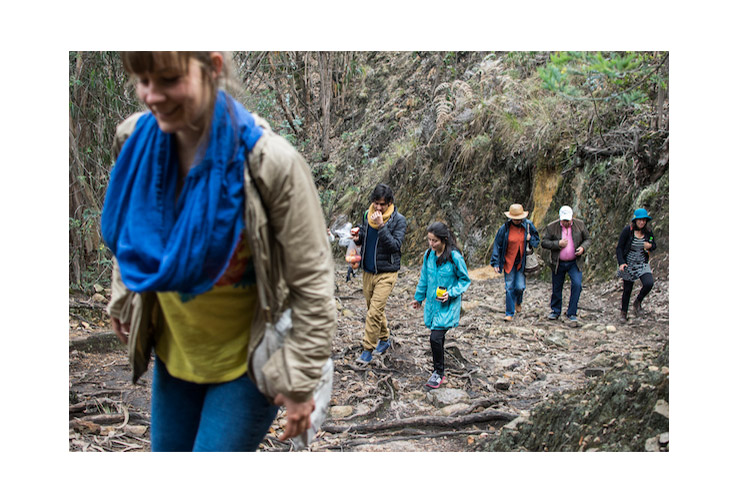 In Bogotá, citizens are encouraged to get to know their lands and take responsible possession of them. Photo (CC BY-SA): Gabriel Corredor Aristizábal.

Since then, as claimed by Manuel, everything has changed. The foundation decided that this piece of land would test the proposal of the great ecological corridor of the eastern mountains of the city. Yet this isn’t a linear corridor that crosses the city exclusively from south to north and is only foreseen for conservation purposes. On the contrary, “it is a social, biophysical and spatial phenomenon that seeks to involve citizens and residents of the area to generate agreements, administer and transform the place to ensure it has a public use and can recover its original ecosystem”, says Diana Wiesner, director of the foundation.

In this way, for two years now the Reserva Umbral Cultural Horizontes has been an example of what the mountains of the city could become. Once a week, early in the morning, a group of people gather at the reserve to take walks, practice yoga and join in talks and other activities in the fresh air of a natural environment where the noise of city streets, traffic and building work is barely perceptible. “Besides the ecological recovery, we organise cultural and artistic events to make sure people learn of the existence of this space. We invite experts to give lectures on topics related to the city”, says Wiesner. The public is diverse and includes volunteers from the foundation, people interested in the mountains and other people who simply want to start their day in a different way.

Summoning people to the activities and encouraging them to appropriate their surroundings has not been an easy task. Generating a community around these projects – particularly when it concerns a place located in Rosales, one of the most privileged districts of the city – entails much effort. Despite the fact that many people today show an interest in the initiative, the foundation admits that much has still to be done in this sense to attract a greater number of people, especially those who live closer by.

Who do the mountains belong to?

The Reserva Umbral Cultural Horizontes, says Wiesner, exemplifies how something that is private can provide a public service. When the former owners of the piece of land decided to donate it they didn’t choose a state organisation. The Fundación Cerros de Bogotá is a private organisation that hopes to make the place a reserve for society as a whole.

The fact is that even though the mountains should be of common use, administering them is not a simple mission. Diana Wiesner claims that there is no state or public-state body in charge of feasibly managing the reserves in the city. At present, 25 organisations have power over these lands in Bogotá, “and without a clearly defined management, this would be impossible to coordinate”. Therefore, the idea of private bodies assuming the administration of the mountains and ensuring their public use doesn’t seem bad. Of course, it’s not a question of excluding the district administration. Organisations like the Fundación Cerros and the Alexander von Humboldt Institute of Research in Biological Resources suggest a joint public-private management of the mountains. As Wiesner explains, the idea is “that there be a private body with decision capacity, that it be executive, but that there also be an executive board that embraces and takes into consideration all pertinent public bodies.”

The eastern mountains are obviously public assets. But is it also obvious that their administration must be effective. Declaring reserves in the city is of no use unless they can become sustainable, functional spaces for citizens. Today, the eastern mountains have only four paths open to the public that are not interconnected. Connecting them would be a positive step aimed at the pending task of administrating these lands appropriately, in order to eventually transform them into spaces for education, conservation and recreation.