The World Happiness Report puts Danes consistently in the top tier. Twice in the past four years Denmark came in first. Danes also report more satisfaction with their health care than anyone else in Europe, which makes sense, since happiness is related to a sense of security and others being there for you. A fine health care system makes that real.

The Danish approach is especially interesting to Americans because of the U.S. suspicion of centralization. Danes prefer to administer their health care locally. On the other hand, they’ve found that the fairest and most efficient way of paying for their system is through income tax, most of which is routed through Copenhagen.

The system delivers quality health care to all and costs Denmark only two-thirds what the United States spends. I’d like to hear Democratic U.S. senators, who mostly reject single-payer health care (except for themselves), try to sell Obamacare to the Danes.

“What?” I imagine the Danes exclaiming. “You want us to spend one-third more of our national wealth on health care, and still leave many Danes without coverage? And end up with inferior health outcomes?”

The continuing attempt by most Democratic leaders to sell health care as a market-based commodity would strike Danes as both unethical (more people die from preventable causes) and a waste of money. What sense would that make?

How did the Danes force their own economy to make sense?

Denmark wasn’t always like this. A century ago its economic system was deeply irrational and poverty was endemic. Despite having a parliament and free elections, a growing number of Danes came to realize that they had a sham democracy. The major decisions were actually made by their economic elite. Many Danes were so discouraged that they left for North America, hoping for something better.

People left behind in Denmark decided to turn their country around, which meant organizing movements to override the will of their contented 1 percent. The people pulled off what might be called a nonviolent revolution.

In the 19th century, their struggle focused on the first two stages that I describe in “Toward a Living Revolution:” cultural preparation and organization-building. A lot of leadership came from N.F.S. Grundtvig, a writer and bishop. He invented the Danish folk schools, which taught adults whose agricultural rhythm gave them some free time during the winter. At folk schools they learned some of the basics of literacy and participatory democracy.

Grundtvig used his religious influence to restore people’s confidence in themselves — he saw spirituality as empowerment rather than “the opium of the people.” He also supported the growth of coops, a form of socialism that rebelled against the merchant class’ deification of the private market. The agricultural coops provided a way to retain the wealth that farmers and agricultural workers sweated for.

Other creative Danes found ways to show that, even in a small Northern European country with few natural resources and frequent gloom-inducing weather, the people could find abundant meaning by developing their collective life, their Danishness.

The intensity of this cultural preparation paid off later in the Danish resistance to Nazi German occupation, when by collective effort the Resistance saved nearly all the Danish Jews from the Holocaust. Rallying around Danishness, however, can have its down side, showing up recently as reluctance to integrate immigrants to Denmark, who now total over 8 percent of the population.

As Danes industrialized, they continued their cultural preparation and organization-building through worker study groups and unions. The industrial workers tested their strength through a wave of strikes in 1899 that forced the employers association to bargain with them on a national level.

The workers movement organized itself into three parts: unions to deal with wages and workplace issues, consumer coops to retain wealth that otherwise would go to the capitalists, and a political party to represent them in parliament — the Social Democrats. Unlike the U.S. unions’ choice largely to support the Democratic Party, the Danish unions decided to create a party that would be would be strictly accountable to the movement. Their choice paid off.

The combination of disruption inside Denmark and radicalism outside the country eroded the elite’s opposition to change, much as the United States experienced in the 1960s and ‘70s. During the civil rights and other movements, the United States took to nonviolent direct action internally while the empire was experiencing uproar in Southeast Asia and Latin America. The American 1 percent felt compelled to make concessions as a result. 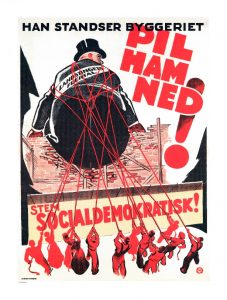 Social Democrat poster from 1931. (The National Museum of Denmark)

For Danish workers, farmworkers and middle-class allies, the post-World War I struggle won two major victories. Industrial workers gained a nationwide guarantee that wages would increase along with inflation. This is huge, as contemporary U.S. workers who have lost so much ground in the past few decades can tell us.

The second victory favored the other large group of poor and near-poor people, the farmworkers in Denmark’s large agricultural sector. Major landowners were forced to give up a substantial part of their land, which were then re-distributed to the farmworkers. The landowners were also forced to pay a substantial new tax on their remaining land. This win took away the last remaining privilege of Denmark’s old landed aristocracy.

The movement’s nonviolent struggle won over the Danish majority, enabling the Social Democrats to begin in 1924 a stretch of governing that ran almost continuously through the 20th century. Because direct action had reduced the elite’s power, the Danes could take leadership in co-creating what economists would later call “the Nordic model.”

Sweden and Norway work to catch up

The Viking cousins in Sweden and Norway imported folk high schools. They developed their own coops and vision-developing study groups. Their goal was to push the 1 percent out of dominance. In my new book “Viking Economics,” I tell the dramatic story of mounting nonviolent confrontations with their economic elites.

In 1931, in Sweden, the struggle came to a head. The elite called out the army to suppress the workers. Troops killed unarmed strikers. Retaliating, the movement staged a widespread general strike. The government fell.

In the years following that victory, the Norwegians escalated the number of their strikes and were joined in nonviolent militancy by the farmers and the movement’s student allies. Norwegians succeeded in making their country ungovernable by the economic elite. The 1 percent was forced to the bargaining table in 1936, where they gave up their dominance of the country’s direction.

While the revolutionary struggles in Sweden and Norway each came to a single breakthrough point in the 1930s, the Danish movement did a two-step. The first breakthrough moment came early, in the years following 1918. The second came in the 1930s.

Disaster hits in the 1930s, and vision saves Denmark

The real measure of a movement is how much it is able to turn crisis into opportunity. Author Naomi Klein writes about this dynamic in a different way, showing how private contractors profit from the global climate change crisis. But when movements seize opportunities, we all flourish — rather than just the power elites. Will movement people today focus on using the opportunity, as the Danes did in the 1930s?

As the Depression deepened existing inequality, Danes polarized. Fascism grew, inspired by Hitler in next door Germany. The attractiveness of communism also increased. The majority, however, was hungry for a solution that would heighten democracy and individual freedom and be in alignment with “Danishness.”

The Danish economic elite was eager to regain their firm hegemonic rule that was shaken by the post-war class struggle. They were tired of being pushed around by the Social Democrats who had been governing since 1924. To stage a comeback, however, the 1 percent needed a solution to the Depression, a breakdown of capitalism. With Denmark’s largely agricultural economy unable to sell its produce to foreign markets, half the population was left with no purchasing power at all.

The 1 percent decided to hold out for market-based solutions: reliance on the private insurance approach to ill-health, for example. They proposed governmental austerity, which under the circumstances was laughable.

Successful movements generate a positive vision of what they want, rather than simply relying on protests about what’s wrong.

The Social Democrats came up with a vision adopting Keynesian stimulation for the macro-economy. The vision flatly rejected austerity. It also rejected insurance and philanthropy as the solutions to misfortune and poverty. The Social Democrats turned decisively toward universal services financed by the government through progressive taxation.

Using the crisis as an opportunity, the Social Democrats secured the foundation of the Nordic model, the most successful economic national model yet invented for the common good. The Danish majority loved it, and the unions and family farmers retained political control of the country for the rest of the century. The model became so hegemonic that all the parties were forced to embrace it to remain relevant at all, even the new “right-wing” party that hates immigration while still promoting a robust version of the Nordic model.

What shall we call that model? Describing Denmark as a “welfare state” is, I think, seriously misleading. The Nordic design isn’t welfare for the needy — that’s the old approach that has not worked for any nation in the world, ever. Instead, the Nordic model provides universal services given to all, whatever their income, as a matter or right, supported by progressive taxation that re-distributes income and wealth.

If you like poverty, continue to think “welfare,” because welfare is mainly about poverty. If you like equality, think “universal services,” because the universal approach has been shown by the Nordics to promote the abolition of poverty.

For the Danes, fully implementing the promise of the Nordic model took a while. The country’s economy improved in the 1930s, but the Nazi occupation set them back. By the late 1950s, the Social Democrats were moving rapidly toward the shared abundance that shows up in their happiness ratings.

Shall we call the change process a nonviolent revolution?

The Danish people did not produce utopia, nor are they first in every measure. Norway has more social ownership of the means of production than Denmark does, and Sweden generates more innovation as measured by patents. The Danes did not end the push-back from the economic elite. Class struggle remains a reality in Denmark, as it does everywhere.

The Danes did, however, end centuries of domination by their 1 percent and empowered the democratic majority to make decisions about the future direction of the economy. They designed a different economy, one that centers labor instead of capital, correctly understanding this shift to be the pre-condition for the abolition of poverty. They also turn to nonviolent direct action to do the heavy lifting when they see it is needed, rather than putting all their eggs in the parliamentary basket.

However we debate definitions, the Danish story of struggle offers valuable lessons for the rest of us. Especially those of us who want to be happy.