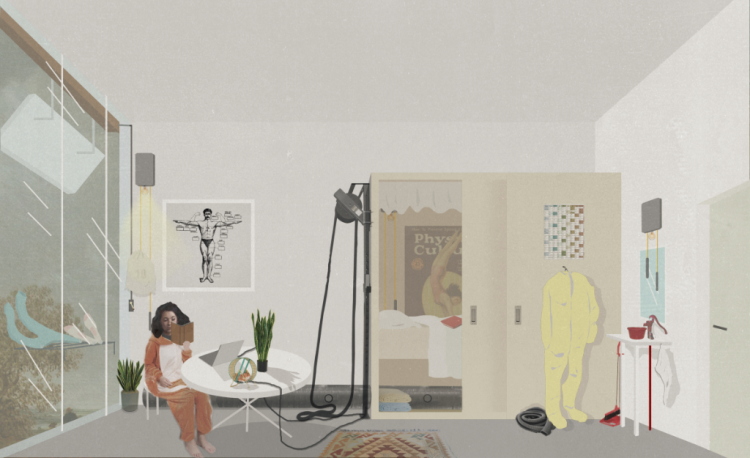 Unlike solar and wind energy, human power is always available, no matter the season or time of day. Unlike fossil fuels, human power can be a clean energy source, and its potential increases as the human population grows. In the Human Power Plant, Low-tech Magazine and artist Melle Smets investigate the feasibility of human energy production in the 21st century.

To find out if human power can sustain a modern lifestyle, we are designing plans to convert a 22 floors vacant tower building on the campus of Utrecht University in the Netherlands into an entirely human powered student community for 750 people. We’re also constructing a working prototype of the human power plant that supplies the community with energy.

The Rise and Fall of Human Power

Throughout most of history, humans have been the most important source of mechanical energy. Building cities, digging canals, producing food, washing clothes, communication and transportation: it all happened with human muscle power as the main source of energy. Human power was complemented with animal power, and windmills and watermills became increasingly important from the middle ages onwards. Most work, however, we carried out ourselves.

These days, human power plays virtually no role anymore. We have automated and motorised even the smallest physical efforts. Mechanical energy is now largely provided by fossil fuels, either as a primary fuel or converted to electricity. This ‘progress’ comes at a price. Industrial society is totally dependent on a steady supply of fossil fuels and electricity, which makes it very vulnerable to an interruption in this supply. 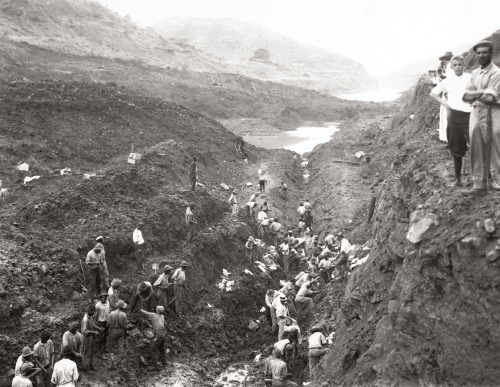 Furthermore, fossil fuels are not infinitely available and their large-scale use causes a host of other problems. On the other hand, renewable energy sources such as wind and solar power are not always available, and their manufacturing is also dependent on fossil fuels. Meanwhile, in order to keep in shape and stay healthy, people go to the gym to exercise, generating energy that’s wasted. The Human Power Plant wants to restore the connection between energy demand and energy supply.

Unlike fossil fuels, human power can be a clean energy source, which produces little or no air pollution and soil contamination. Moreover, the potential of human power increases as the human population grows, while all other energy sources need to be shared among an ever-growing amount of people. Furthermore, unlike solar panels, wind turbines, and batteries, humans don’t need to be manufactured in a factory. In combination with the right diet, human power is carbon neutral.

Finally, humans are all-round power sources, just like fossil fuels. They not only supply muscle power that can be converted to mechanical energy or electricity, but also thermal energy, especially during exercise: a physically active human being can generate up to 500 watts of body heat. Furthermore, human waste can be converted to biogas and fertiliser. Arguably, human power is the most versatile and most sustainable power source on Earth. 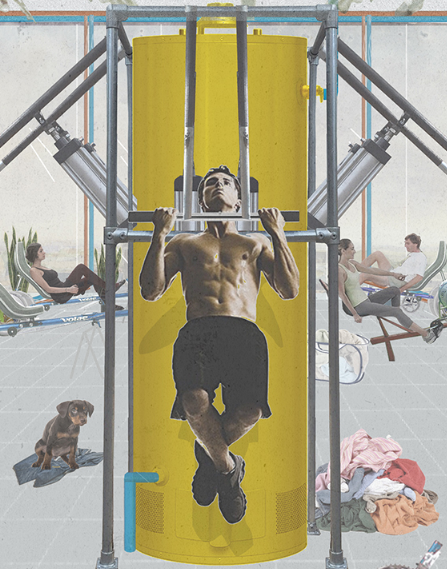 Modern technology has greatly improved the potential of human power production. On the one hand, many electric devices have become very energy efficient. For example, solid state lighting consumes roughly ten times less power than old-fashioned lightbulbs, so that a quick workout can supply many hours of light. On the other hand, we now have much better technology for human power production, ranging from sophisticated exercise machines to biogas power plants.

Lessons from the Gym

The power output of a human being is determined by three factors: the person, the duration of the effort, and the mechanical device that is used to convert human power into useful energy — human power generation is often a symbiosis between man and tool or machine. Our legs are roughly four times stronger than our arms, which means that a human on a stationary bicycle machine can produce more power (75 to 100 watts) than a human operating a small hand crank (10 to 30 watts).

During shorter efforts, the mechanical power output of a human being can increase substantially: up to 500 watts on a bicycle and up to 150 watts while operating a hand crank over a period of one minute. However, age, gender and fitness also play an important role. Athletes can generate more power for a longer period of time — up to 2,000 watts during three seconds, or up to 400 watts during one hour. So far the theory, which is far from complete.

During the research phase for the Human Power Plant, we followed a fitness programme to become better human power sources. This was a very instructive experience. One of the first things we learned is that there are important differences between individuals, even if they have similar age, gender and fitness. 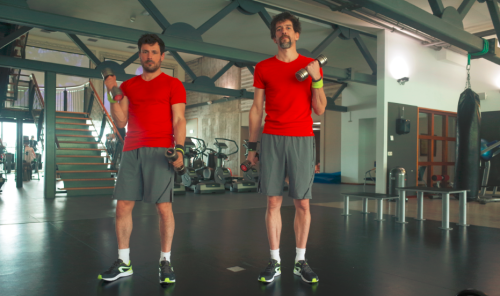 Melle, the powerhouse in our team, could lift a heavier weight on almost any exercise machine. Kris, on the other hand, appeared to have better endurance, and could beat Melle with triceps and shoulder exercises. Such differences should be taken into account in order to achieve optimal energy production – there is no ready-made solution.

We also found out that exercise machines for strength training can produce a lot of power in a very short time, making them an interesting addition to stationary cycling machines for human power production. A five minute workout (including two breaks of one minute each) can supply more than 15 Wh of electricity, enough to charge a quarter of a laptop’s battery or to power a desk lamp for 3 hours.

Finally, we quickly discovered that gyms are pretty boring places. The exercise equipment is often positioned in such a way that people all look in the same direction, which excludes all but the most primitive communication. And, while a stationary bicycle is considered to be the most energy-efficient human power machine, we found out that stationary cycling is no fun at all.

How to Motivate Human Power? A financial reward won’t do the trick, because at the current energy prices in the Netherlands, a human generating electricity would earn only 0.015€ per hour. Consequently, unless environmental awareness increases dramatically, the use of human power could open the door to new forms of slavery. Is such slavery justified for a reduction in CO2-emissions? Could we force refugees or criminals to produce power?

These are disturbing questions, because the history of human power is — broadly — also the history of slavery. These days we import oil, coal and uranium, in the past we imported slaves. Luckily, there may be a third possibility. We can try and motivate people by making human energy production more fun, social, and exciting.

The few commercially available devices for human energy production are entirely focused on energy efficiency — there’s no attention to fun or motivation. They are also designed for emergency purposes, not for prolonged and daily use. For example, most hand cranks are made as compact as possible, while a larger device would be much more comfortable to use.

For the design of our prototype human power plant, we wanted to address these issues. We teamed up with makers and sports coaches to develop fitness machines that are suited for different types of human power sources, are fun too use, and produce a maximum amount of power. 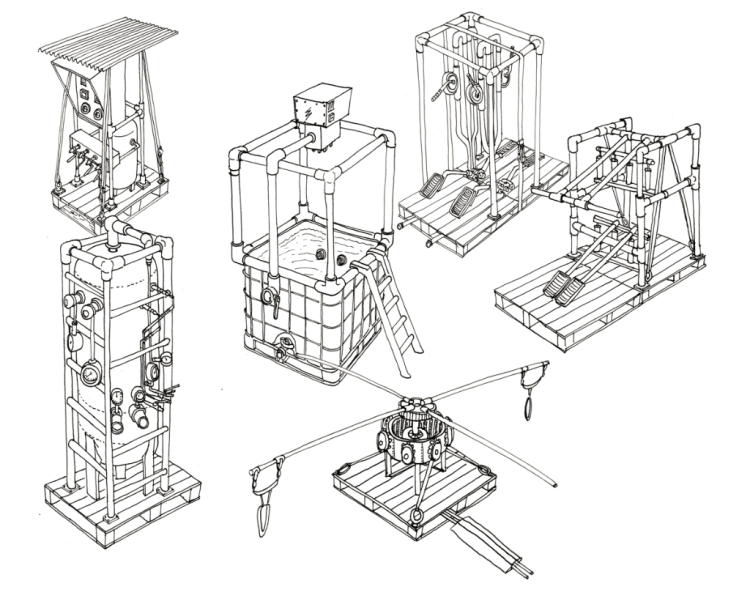 To make power production more social, we decided that power producers should be able to talk to each other. They can even bring their pets to help with power production, creating a cosy and home-like atmosphere. This is not a new idea: dogs were commonly used as a source of mechanical power in pre-industrial times, and also provided their owners with a source of warmth.

For extra motivation, all exercise machines in our prototype human power plant are facing a jacuzzi & shower where girls are invited to encourage the boys to flex their muscles and generate more power. Of course, the gender roles could be reversed, but during the first experiments we discovered that this is less energy-efficient. Girls don’t seem to get motivated by guys in jacuzzis, at least not to the extent that guys get motivated by girls in jacuzzis. 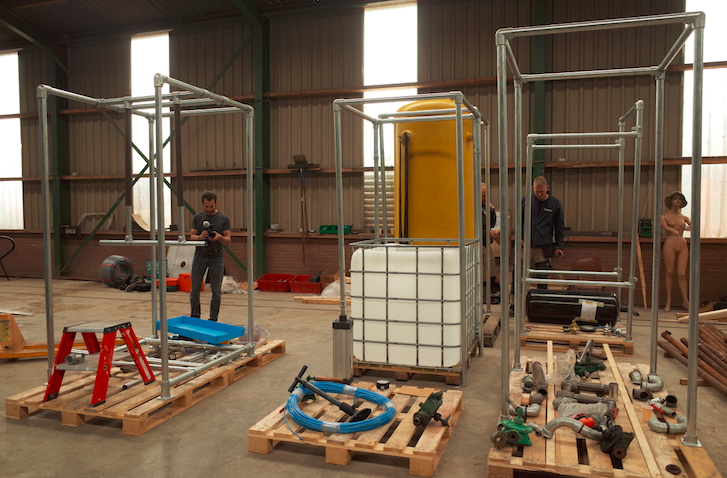 The jacuzzi is not a gimmick, but an essential part of the prototype human power plant. That’s because we opted for water under pressure as the energy carrier. The kinetic energy produced by humans and their pets is pumped into a pressure vessel, which produces water under pressure that is led to water turbines which supply mechanical energy and electricity. The jacuzzi is the receiving reservoir of this closed system.

With the choice for water under pressure, we want to make energy more visible and audible. More importantly, however, it allows us to produce electricity without the use of batteries and electronics — which are not sustainable components. In our human power plant, the hydraulic accumulator takes the place of the battery and the voltage regulator. Small variations in human power production can be smoothed out, keeping the voltage constant. Longer term energy storage is provided by the humans themselves.

To find out if we could sustain a modern lifestyle with human power alone, we teamed up with architects to design plans for the conversion of a 22 floors tower building into an entirely human powered student community of 750 people.

The Willem C. Van Unnik building is the tallest building on the campus of Utrecht University. The concrete, steel and glass monolith, which occupies a central position on the campus, was built in the late 1960s and has been mostly empty for years. Maintaining it is an important cost for the university, who owns the building.

Because the university has the ambition to become carbon neutral in 2030, we propose to turn a problem into an opportunity. The ecological footprint of the human powered Van Unnik student community will be close to zero, and the building is already there. 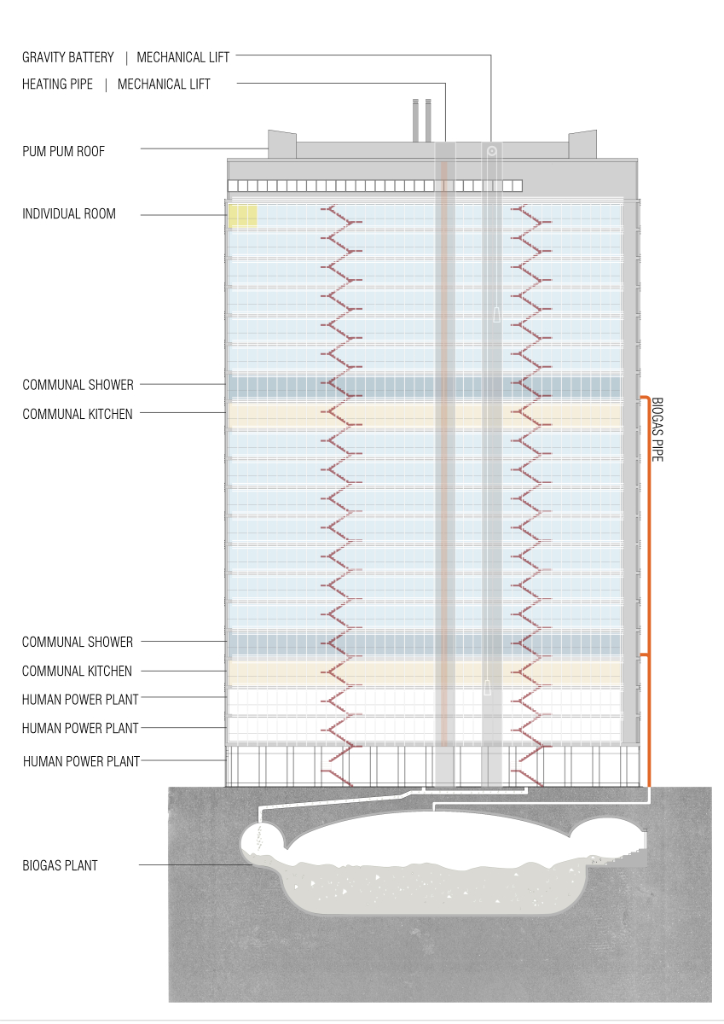 Each student in the human powered Van Unnik student building is responsible for generating the electricity that’s used in his or her individual room. The lower floors of the building are reserved for communal energy production, providing both electricity and warmth. This energy is used to heat the building, prepare food, wash clothes, take showers, and so on.

More energy is supplied by a biogas plant, which is operated by the students and runs on their food waste and excrements. A time schedule tells every student when he or she has to produce electricity and heat, and when to perform other services for the community.

According to our preliminary calculations, an entirely human powered student building is achievable. The students would maintain a modern lifestyle, including hot showers, computers, and washing machines. On the other hand, they would have to produce energy for 2 to 6 hours per day, depending on the season and their individual and communal preferences. 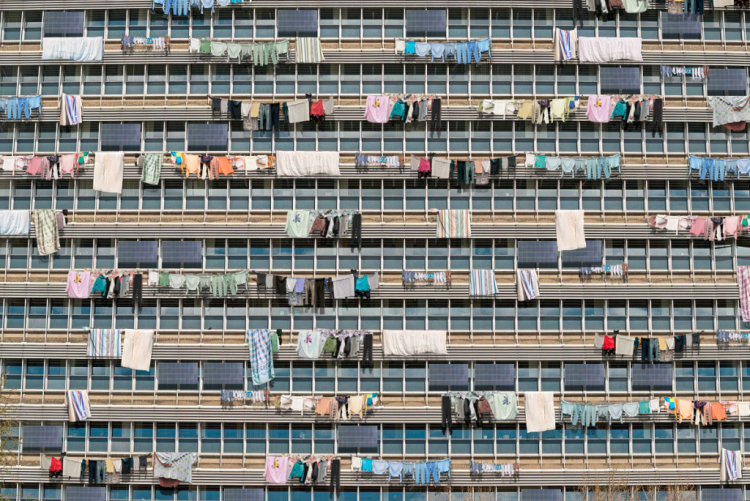 A human powered student community has enormous potential for a reduction in energy use. If students have to generate their own power, they are much less likely to waste it. How far would students go to reduce their efforts? Would hot showers go out of fashion? Would salads be the next culinary trend? Would typewriters make a comeback?

Energy use is also lowered by encouraging the communal organisation of daily household tasks, just like in the old days. Finally, the human powered student community applies low-tech solutions, such as fireless cookers, thermal underclothing, and heat exchange showers, which all maximize comfort in the context of a limited energy supply.

The design of the building and the construction of the prototype human power plant is documented on a separate blog: Human Power Plant. It’s a work-in-progress, and comments are welcome. Once the project is complete, we will post an update on Low-tech Magazine.

The Human Power Plant is part of the Zero Footprint Campus project, for which 12 artists examine sustainability.