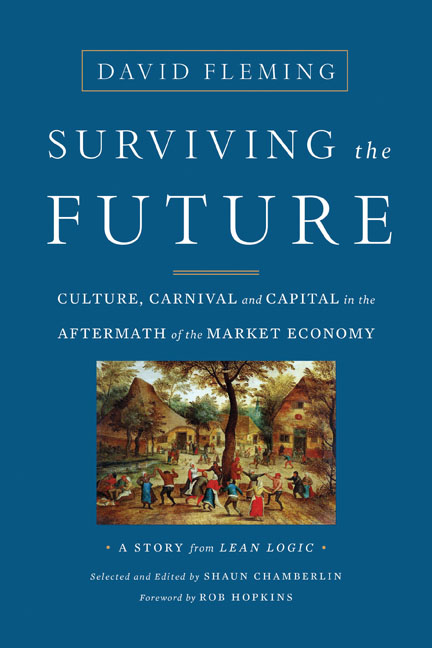 Few books on economics and politics would foreground arguments for “a strong culture,” claim that “laughter creates insight and solidarity,” and advise that you should always “start with a party.” But David Fleming’s Surviving the Future, edited by Shaun Chamberlin, makes the case that political change will only come through a “rediscovery of community.”

Instead of placing confidence in policy, regulation, legislation, and rights, this collection asks, “What about culture?” Fleming, even as a policy wonk who founded an independent research centre, argues that if we become over-reliant on policy and law—in many ways a political shortcut to community building—it will be a “guarantee of failure.”

So could an informal economy of “reciprocal obligation, emotional literacy and social capital” be the new framework for building post-market communities? With this comes the work of reviving and inventing customs, celebrations and conventions to create a new cultural dynamic of solidarity, and Surviving the Future expects it will be a slow process—descent not collapse—to reverse the depersonalising effects of the market economy.

If the lean economy exists beyond market failure and the democratic deficit of state politics, how does lean logic apply to the state? Unsurprisingly he argues that the state creates dependency. Fleming quotes Kirkpatrick Sale who, in his book Human Scale, claims “there is not one of them [state services], not one, that has not in the past been the province of the community or some agency within the community (family, church, guild) and been taken on by the state only because it first destroyed that province.” Sale, as does Fleming throughout the book, makes the case for these responsibilities to be “reabsorbed” by local economies, and that political economies —villages—were the normal state of affairs, long before the “great civic societies.”

With the loss of local governance comes a community enfeebled by market and government provision. But how do you transform the community that no longer makes decisions for itself? Fleming does not offer a programmatic answer but suggests the appearance of “character,” which he describes as having the capacity for “moral courage, depth, resourcefulness…and [capability for] originality and surprise.” Again, for Fleming it’s always about human potential more than a detailed description of the process. Economics here is about relationships, not objects.

But can we revive this character, strengthen our culture, and work on the “central collaborative task” of a lean economy—trust building? This is where Fleming evokes the social role of carnival as a ‘culture of practice’: “The practical skills required by carnival… build craftsmanship. Ritual requires talent.” Fleming argues that much of the work in the aftermath of the market economy will be building “local competence”, activating participation and responsibility, and developing “slow-growing” trust. For the lean economy, it also becomes an experiment in how we gather, convene, and reorganise ourselves outside of market economics, religious institutions, and political parties.

But for all this ‘work’, Fleming seems to imply that the communities who will have the ability to be resilient against economic and climatic shocks will be “play communities”: those who “enjoy themselves.” For all the incentives and penalties of our current system, it could be a culture of “having fun” that creates the trust and reciprocity needed to rebuild. According to Fleming, though, our motivation has been historically subdued by the loss of carnival, and the rise of the current ‘What’s the point?’ experience of loneliness, boredom, anxiety and depression.

So if we’re planning on rebuilding communities, what’s the scale of a lean economy? Fleming’s approach is to “deintensify” from large political units to “small groups, households, neighbourhoods.” But he doesn’t simply repeat the intellectual reflex that “small is always right,” but rather, that “it’s being the right size that matters.” Elsewhere, in Energy and Common Purpose, Fleming argues that, “Large-scale problems do not require large-scale solutions; they require small-scale solutions within a large-scale framework.” We see this approach in the distributed ownership of the Transition movement, which Fleming considers as “more-or-less indistinguishable from a pathway to a lean economy.”

Still on the question of scale, Fleming’s history of “hydraulic regimes” provides interesting climatic reasons for autocracy and compares this with rain-fed agricultural societies. In the case of the latter, if the “state fails to carry out its duties,” he argues, “life will go on.” While Fleming is mostly right about the history of these “top-down projects” and the apparent need for what Karl Wittfogel calls “great organisers,” Elinor Ostrom’s research provides a historical case study of Spain’s Huertas—environmentally sustainable water commons—which did not “involve extreme autocracy.” These huertas existed for thousands of years in Spain—a country that is only 17% irrigated—through local determination, effective monitoring and the regular election of a syndic from among the farmers. Her husband, Vincent, also researched similar water commons in their native California, Mexico, and the Philippines.

In Surviving the Future, Fleming creates scenarios not forecasts of the future, and we will not need revisions, he tells us, but a “complete rewrite.” For communities that will depend “not on what they can buy, but on what they do,” this book has much to offer. Chamberlin’s edited collection makes a call to the potential of imagination, not instruction, suggests building a culture to “activate citizen’s intelligence,” not a legislative path towards “green authoritarianism.”

But with the immediacy of economic and climatic shocks, and Fleming’s own assumptions that, “local communities will not have access to government funding for any of their needs; they will not have an income that enables them to buy goods and services they need from outside the locality,” it’s unsurprising that many call for policy and regulation, rather than rely on the unpredictability and “slow prudence” of this emerging “character.” If this transition will inevitably make the “state unnecessary”—a phrase taken from American mystic Ralph Waldo Emerson, which Fleming describes as “one of the most remarkable statements in literature”—how necessary is the state now and how do we interact with it? These are pertinent questions for those working in the solidarity economy.

One thing we know is that the future will be very different, and this book is, in many ways, about diversity. If the market economy has created vulnerable and fragile monocultures, the lean economy will have to develop, as Sale argues, a “multiplicity of ways of caring for itself”: “tak[ing] on many jobs, learn[ing] many skills, liv[ing] many roles.” This interdependence, or “communal self-reliance,” sounds like a much healthier existence than our heavily specialised economy.

For Fleming it’s not so much about the degrowth of the market economy—for him, it’s inevitable—but about building and preparing a strong informal economy. If localisation is at the “limits of practical possibility,” Fleming claims that “it has the decisive argument in its favour that there will be no alternative.” All they need, he says, is to be given the chance. Here it is. Unlocking the Next Economy

Treasure Island: Tax havens and the men who stole the world

In Transition 2.0 — printing your own money, growing food, localising economies, and setting up community power stations