November 15, 2016 — Each morning last summer, Michael Roswell walked through restored meadows and abandoned New Jersey farm fields, where leggy grasses and weeds grew unchecked and thick patches of bee balm, black-eyed Susans, mountain mints, goldenrod and purple-loosestrife added shots of magenta, yellow, and white. Each time a bee landed, Roswell would swing his sweep net, capturing the insect so he could identify it by species. A doctoral student at Rutgers University, he was trying to answer a seemingly simple question: What kinds of flowers do bees like?

The answer may be complicated. A recent analysis by researchers at the U.S. Geological Survey detected genetic material from more than 260 different flowering plant groups in the pollen of North Dakota honeybees. And honeybees are just one species: All told, the U.S. Department of Agriculture estimates there are more than 4,000 bee species in the United States alone. 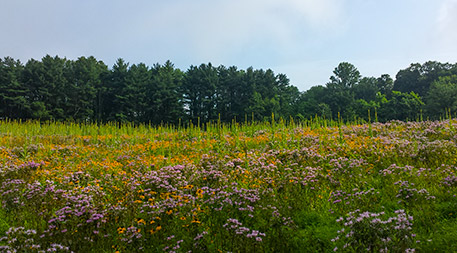 A field bursting with blooms is a bee’s delight. Researchers are working to identify how to optimize such habitats to best support beneficial insects beleaguered by disease, pesticides, climate change and more. Courtesy of Michael Roswell.

But finding an answer could be an important piece of the puzzle when it comes to combating steady declines of native bee populations and honeybee colony losses. Bees survive on nectar and pollen from flowering plants. Large-scale landscape change — loss of wildflower-rich prairies to crop monoculture or conversion of open lands to suburban development, for instance — is a threat to pollinators and may play a major role in declines by making it harder for bees and other pollinators to find a meal.

Researchers know that better habitat attracts more pollinators. Yet simply planting more flowers may not solve the problem of pollinator declines. Many ecologists agree that restoring plant diversity to depleted landscapes is key to bolstering bee populations. The presence of plants that flower at different times during the spring, summer and fall helps to ensure that pollinators have food throughout the growing season and that everyone can find something they like to eat.

What’s less clear is how to do that in ways that really count.

As more non-profit, state, and federal entities are stepping up efforts to protect and restore pollinator habitat, scientists like Roswell are working to figure out how to optimize habitat restoration projects for pollinators.

“For most of these bee species, we simply don’t know what kind of habitat is going to help their populations grow,” says Roswell. “Some floral resources may be more important than others.”

Last summer he collected about 20,000 bees. For each, he recorded the species, sex and what kind of flower it was collected from. He wants to get a better sense of how bees use habitat. That includes which flowers different bee species — and even males and females of the same species — prefer. 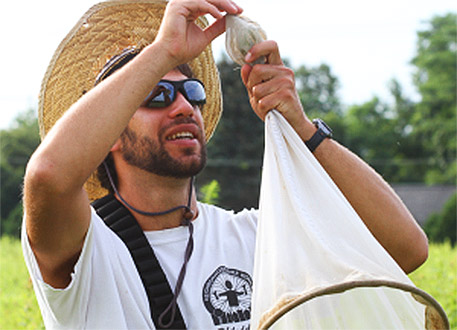 Michael Roswell examines a sweep net as part of a study looking at which flowers various pollinators prefer. Courtesy of James Reilly.

Scientists at Florida State University; University of California, Davis; the University of California, Berkeley; and the University of Minnesota have developed mathematical models to help process big data sets of plant-pollinator interactions like the one Roswell is working on. The goal, says Leithen M’Gonigle, a professor of biology at Florida State, is to gather information that can be used to create wildflower seed mixes for habitat restoration that include both plant species that pollinators like and plants that bloom at different times from spring to fall in order to support pollinators through different life stages. Based on their findings, Neal Williams, an entomologist at UC Davis, will begin to test how bee populations respond to different seed mixes in field trials in the spring.

If knowing what flowers to plant is one side of the equation, knowing how bee populations respond to habitat restorations is the other, says Williams.

Counting bees on a particular plot can show how many individual bees and bee species are visiting flowers there, but it won’t tell ecologists what they really want to know: whether these plantings are helping to reverse population declines. Existing populations may just be redistributing themselves to be closer to better habitat. “From a conservation perspective, we want to make more bees, not just redistribute them,” says Elizabeth Crone, a professor of population ecology and dynamics at Tufts University in Massachusetts.

Crone and Williams teamed up to see how bumblebee colonies grew and reproduced across a gradient of northern California habitats in one of the first studies to quantify how bee populations respond to floral resources. They found that colonies in habitats with lots of flowers throughout the growing season got bigger and produced more queens — a measure of reproductive output — than colonies in depleted habitats. Yet even across depleted habitats, some colonies performed better than others. The findings, they say, show the importance of understanding how a colony reproduces in relation to its floral resources rather than just focusing on how many flowers it has access to.

How fast a colony starts to grow in the spring may be just as important as total number of flowers, notes Crone. She believes that maximizing conservation efforts requires understanding other factors that influence reproductive success, such as how easy it is for bees to find places to nest in the spring and what kind of resources queens need to survive the winter. In other words, floral diversity is important — but it’s not the entire answer for how to improve habitat to boost bee conservation.

“A better understanding of these basic life cycle factors can help us to figure out what else we should be doing for conservation in addition to planting flowers,” she says.