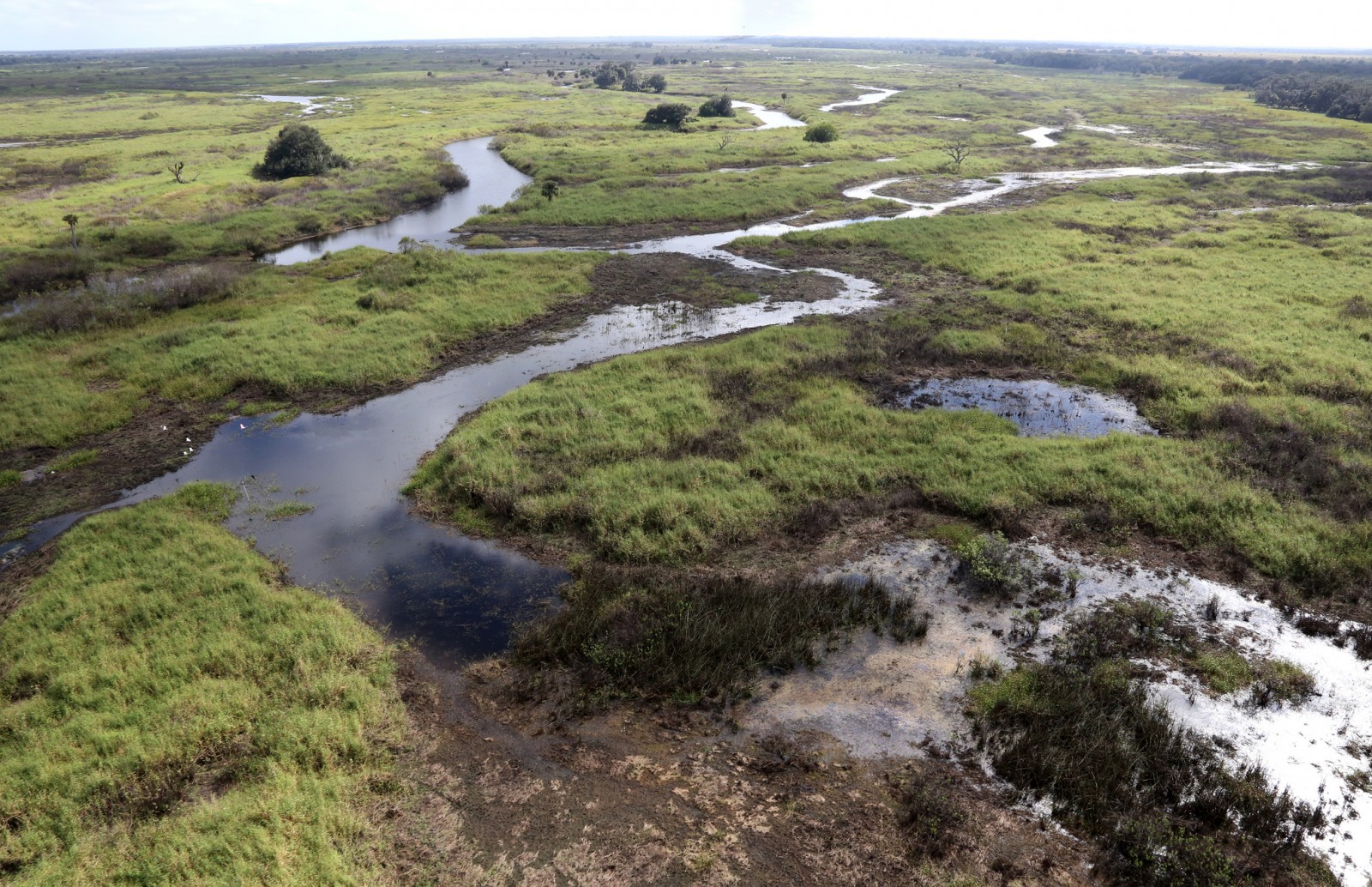 When toxic blue-green algae closed beaches on Florida’s Treasure Coast this month, water managers were asked to do two things: First, stop the flow of polluted water east and west from Lake Okeechobee into the St. Lucie and Caloosahatchee estuaries. Second, send more water south of the lake to the Everglades.

In its simplest form, that has been the recipe for restoring water quality in South Florida for nearly three decades. Too much nutrient-loaded water from Lake Okeechobee flows into the St. Lucie and Caloosahatchee. It causes algal blooms, and harms plants and animals in the normally brackish estuaries.

Too little fresh water from the lake flows into the Everglades, compounding saltwater intrusion.

Both sets of problems are the unintended consequences of the massive Central and Southern Florida Project, an engineering scheme of more than 2,700 kilometers (1,700 miles) of canals and levees first authorized by Congress in 1948 to provide flood protection and allow agricultural development. But more than half a century after Marjory Stoneman Douglas first called national attention to the region’s troubles in her book “The Everglades: River of Grass”, managers are still struggling to revert water flows to a more natural course.

As a result, algal blooms in Florida’s coastal estuaries recur every few years, sometimes closing beaches or killing wildlife. Habitat in the Everglades continues to degrade. It has become yet another of the country’s festering environmental wounds, akin to the persistent, oxygen-deprived “dead zones” in the Gulf of Mexico and Chesapeake Bay, and the toxic algal blooms in Lake Erie.

In each case, decades of scientific research and huge sums of money have been dedicated to understanding the problems, and developing cures. A major component is cutting pollution from nitrates and phosphorus, two nutrients found in fertilizers, sewage, and manure. Rain runoff from farm fields and cities is the biggest source of these nutrients in the nation’s waterways, yet it remains largely unregulated under the federal Clean Water Act. That makes progress stubbornly slow in places like Lake Erie and the Gulf of Mexico, while managers in the Everglades must now figure out how to remove hundreds of years’ worth of phosphorus already contained in Lake Okeechobee.

The Gulf of Mexico dead zone, fueled by nitrate and phosphorus runoff in the Mississippi River basin, is this year forecast to cover an area the size of Connecticut. The dead zone has been monitored since the 1970s, but remained about the same size since the 1990s—three times bigger than the goal set by a state and federal task force formed in 1997 to address the issue.

Similarly, the Lake Erie blooms, which largely disappeared in the early 1990s, have significantly worsened over the past decade, and last year’s bloom was the most intense on record.

Chesapeake Bay has fared slightly better. In May, researchers at the University of Maryland announced that Chesapeake Bay scored a 53 percent, or “C”, on its annual health report, one of the three highest scores since 1986. The bay’s condition has oscillated in that time between the 40 and 50 percent mark, but appears to be making incremental improvements since the U.S. Environmental Protection Agency implemented a “pollution diet” for the region in 2010.

In South Florida, algal blooms in estuaries and fresh water shortages in the Everglades over the past five years have frustrated residents and conservationists. In 2011 and 2012, for example, algal blooms killed off large swathes of seagrass in Indian River Lagoon. A dearth of fresh water flowing into Florida Bay last year caused a turtle grass die-off covering approximately 16,000 hectares (40,000 acres). And excess fresh water released down the St. Lucie this year triggered algal blooms and prompted Florida Governor Rick Scott to declare a state of emergency in four counties.

It’s not that nothing is being done. Restoring the balance of water in South Florida and the Everglades is the focus of numerous federal and state initiatives, and has been since the early 1990s. The biggest is the Comprehensive Everglades Restoration Plan. Authorized by Congress in 2000, the $US 10.5 billion plan includes more than 50 projects and could take over 30 years to complete.

In a 2015 report on the plan’s progress, the U.S. Army Corps of Engineers described the plan as “reconfiguring the water management infrastructure of an 18,000 square mile region.” That includes projects to allow more water to flow south to the Everglades, shore up the dike surrounding Lake Okeechobee so it can store more water safely, and create large manmade wetlands to remove high phosphorus levels from Lake Okeechobee water, which can harm plants in the Everglades and contribute to algal blooms.

Despite having the overall plan in place, the individual projects still require authorization and appropriations from Congress. That is usually accomplished through the federal Water Resources Development Act, which was most recently renewed in 2014. The 2014 version of the act gave the go-ahead for four Everglades restoration projects, but a major initiative—the Central Everglades Planning Project—is still waiting approval. The CEPP would cost nearly $US 2 billion.

“This crisis has been decades in the making. While we know it won’t be solved overnight, we still need immediate action on the projects that will move us towards the long-term solution of sending clean water south,” U.S. Representative Patrick Murphy, who represents Florida’s 18th District covering Martin and St. Lucie counties, said in a statement earlier this month. “I thank my colleagues on both sides of the aisle for recognizing the disaster facing our waterways and the urgent need to work together to protect our environment by moving CEPP forward.”