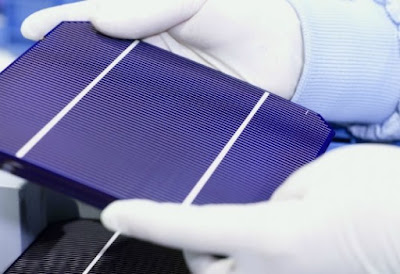 According to a recent, comprehensive study of the scientific literature (1), the average energy return on energy invested (EROEI) of the most common photovoltaic technology (polycrystalline Si) is 11-12. A far cry from the legend of the "EROI smaller than one" that’s making the rounds in the Web 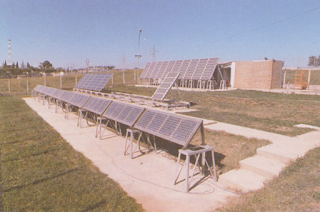 Some time ago, a colleague of mine told me the story of when he had been in charge of the installation of one of the first photovoltaic plants in Italy, in 1984 (shown in the figure, on the right). He told me that, shortly after the installation, a high-ranking politician came to visit the plant. As a demonstration, my colleague connected the plant output to an electric heater, lighting up the internal heating elements.

The politician refused to believe that the heater was being powered by the PV plant. "There has to be a trick," he said, "this is not possible. It must be a scam." My colleague tried to describe to him how PV cells work, but imagine trying to explain quantum mechanics to a politician! Apparently, he left still unconvinced.

More than 30 years have passed from the installation of that old plant, but the general attitude about photovoltaic energy doesn’t seem to have changed a lot. Not that people think that photovoltaic is a scientific hoax in the same league as the many proposals about such things as "free energy" or "cold fusion" (or maybe yes). But it seems that many people just can’t believe that those small blue things can produce energy in any significant amount. Come on: in order to produce energy you need an engine, a boiler, a smokestack, a turbine, something like that…..

Indeed, most of the current discussions on photovoltaic energy seem to turn around one or another kind of legend. The most recent one seems to be that photovoltaics has a low energy return (EROI or EROEI), sometimes said to be even smaller than one. If it were true, it would mean that photovoltaic plants are not producing energy, they are just consuming it! But it is not true. It is just one more example of confirmation bias: cherry-picking the data that confirm one’s pre-conceived ideas.

It is true that you can find a few studies (very few) that look serious (perhaps) and that maintain that PV has a low EROI. However, in a recent study, Bhandari et al. (1)⁠ surveyed 231 articles on photovoltaic technologies, finding that, under average Southern European irradiation, the mean EROI of the most common PV technology (polycrystalline Si) is about 11-12. Other technologies (e.g. CdTe) were found to have even better EROIs. Maybe these values are still lower than those of some fossil fuels, but surely not much lower (if they are lower) and a far cry from the legend of the "EROI smaller than one" that’s making the rounds on the Web.

Then, if you are worried about another common legend, the one that says that PV cells degrade rapidly, think that those of the plant described at the beginning of this article were found to be still working after 30 years of operation, having lost just about 10% of their initial efficiency! In addition, consider that the most common kind of cells use only common elements of the earth’s crust: silicon and aluminum (and a little silver, but that’s not essential). What more can you ask from a technology that’s efficient, sustainable, and long lasting?

All that doesn’t mean that a world powered by renewable energy will come for free. On the contrary, it will take a very large financial effort if we want to create it before it is too late to avoid a climate disaster (quantitative calculations here). But a better world is possible if we really want it.

Here is the relevant figure from the article: 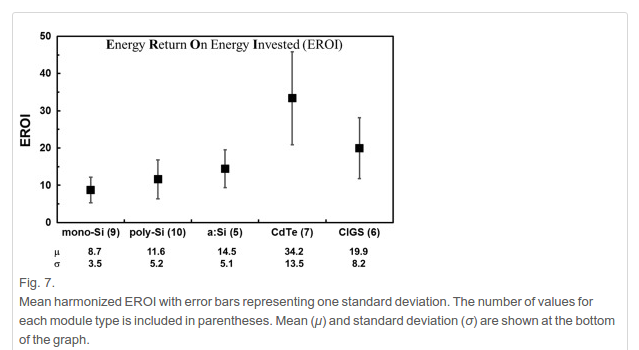