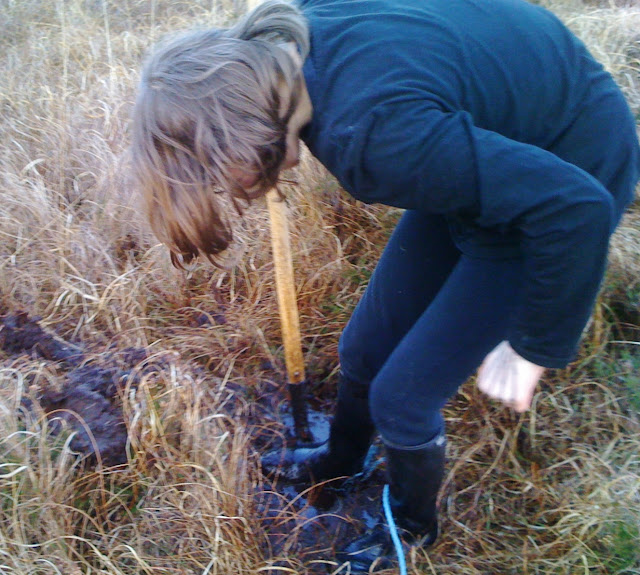 Like most people these days, we have a refrigerator to keep food fresh, and it runs on electricity – and here in Ireland, we get that from burning peat, or “turf.” A short walk from our house in the Bog of Allen, the land has been strip-mined to remove, press and dry the turf, in order to burn it in furnaces to boil water to run turbines to spin magnets to generate electricity to run refrigerators to keep food fresh.

Or you could do what Irish people used to do for thousands of years, and just bury food in the bog without all the steps in between. And when I say “food,” I really mean butter. It sounds bizarre, but there were good reasons for it, and we’re experimenting with preserving food the same way ourselves.

Irish bogs are often misty and mysterious places, where local people would secretly speak their own forbidden language, teach children their faith, poach meat – and occasionally hide things. When farmers later drained areas of bog-land, they revealed the reddish ground under the water – thousands of years of compacted sphagnum peat moss, pressed into a solid mass. The farmers then scooped out the turf with special shovels, dried them at home, and burned them in the fireplace – and today, machines do the same thing on a vaster scale.

Occasionally they find more than turf. Archaeologists have found ancient necklaces, coins, tools, swords, 1,200-year-old prayer-books, the remains of Viking settlements, and apparent human sacrifices. Not much decomposes in the acidic, oxygen-free bog-water, so tough organic material simply cures in it like leather. Shops around us sell “bog-oak,” wood from ancient trees that fell in the bog long ago, cured and darkened but still solid, and some writers believe that the Irish used to bury wood there intentionally to make musical instruments with the right tone.

And sometimes turf-diggers unearth packages of butter – small as fists or big as barrels, wrapped in bark, wood or baskets. One recent discovery, a barrel of butter weighing more than 35 kilos, dated from 3,000 years ago – and many such discoveries have been eaten, and were reported to be delicious.

More than 430 such finds have been recorded, and that does not count all the buried gastronomic treasure still waiting out there. Since we can suppose that people buried their butter to unearth and eat it later, and usually did so, these hundreds of finds must represent the small proportion of times that their owners died or the locations forgotten. This must have been a rather commonplace activity.

All the same, why butter, you ask? Probably because decomposers are slow to take apart fats anyway, and meat or vegetables would be more readily consumed. A surprising number of foods around the world are preserved by being buried in the ground, but they are usually dried foods in arid climates (cheese in Italy), or sub-Arctic countries where the ground is freezing (salmon in Sweden), or where the food is meant to ferment in some way (eggs in China).

Also, butter makes a valuable and high-calorie food for poor agrarian people; with it you can fry food or preserve things like potted meats. It was also taxed in medieval times, so burying it could have been a kind of tax evasion.

As with the other organic matter, butter did not go rancid in the waterlogged soil, and could be perfectly preserved after thousands of years. Archaeologist Daniel C. Fisher buried various meats in a frozen pond and a peat bog for comparison, and found that after a year, the meat buried in the bog had no more bacteria than the frozen meat – and remember, some of that fast-food meat might be more than a year in the freezer.

Finally, some authors have pointed out that preserving it this way would give the butter an earthy taste that some might have liked; recently unearthed butter, taste-tested by Irish schoolchildren, was reported to taste like well-aged cheese.

My daughter and I decided to do the same thing, making some butter at home and burying some in the bog-lands behind our house. In the old days this might have been done with a butter churn, but we were only doing small amounts, so we poured milk into a jar until it was half full and shook it – music is good for this part. At some point the sound of the sloshing changes, and you have a solid clump of butter in the middle of the liquid. In olden days many people would pat the butter dry of any milk-liquids, but we heated the solids off, not-quite clarifying it. Then we solidified it, wrapped it in cloth, and set off from our house.

From our house it’s a short walk to the Bog of Allen, where we dug a hole half a metre deep. We tied a rope around the cloth wrapping, and tied the other end of the rope to a nearby tree, and counted the steps in each direction to the neighbouring field. In six months or so we’ll come back, and see how edible the results are. Such experiments combine home-schooling, home-cooking, and empirical science all in one, and help us re-discover the methods our forebears used to survive for generations.

James O’Laverty, ‘The True Reason Why the Irish Buried Their Butter in Bog Banks’, Journal of the Royal Society of Antiquities of Ireland, 2 (1892), 356-337.

‘Wrapped and Stuffed: Proceedings of the Oxford Symposium on Food and Cookery 2012′.