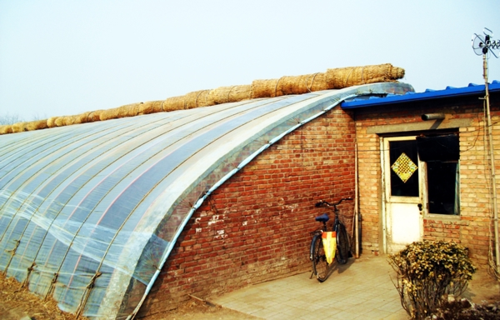 The modern glass greenhouse requires massive inputs of energy to grow crops out of season. That’s because each square metre of glass, even if it’s triple glazed, loses ten times as much heat as a wall.

However, growing fruits and vegetables out of season can also happen in a sustainable way, using the energy from the sun. Contrary to its fully glazed counterpart, a passive solar greenhouse is designed to retain as much warmth as possible.

Research shows that it’s possible to grow warmth-loving crops all year round with solar energy alone, even if it’s freezing outside. The solar greenhouse is especially successful in China, where many thousands of these structures have been built during the last decades.

The quest to produce warm-loving crops in temperate regions initially didn’t involve any glass at all. In Northwestern Europe, Mediterranean crops were planted close to specially built "fruit walls" with high thermal mass, creating a microclimate that could be 8 to 12°C (14 to 22°F) warmer than an unaltered climate.

Later, greenhouses built against these fruit walls further improved yields from solar energy alone. It was only at the very end of the nineteenth century that the greenhouse turned into a fully glazed and artificially heated building where heat is lost almost instantaneously — the complete opposite of the technology it evolved from.

During the oil crises of the 1970s, there was a renewed interest in the passive solar greenhouse. [7] However, the attention quickly faded when energy prices came down again, and the all-glass greenhouse remained the horticultural workhorse of the Northwestern world. The Chinese, on the other hand, built 800,000 hectare of passive solar greenhouses during the last three decades — that’s 80 times the surface area of the largest glasshouse industry in the world, that of the Netherlands.

The Chinese passive solar greenhouse has three walls of brick or clay. Only the southern side of the building consists of transparant material (usually plastic foil) through which the sun can shine. During the day the greenhouse captures heat from the sun in the thermal mass of the walls, which is released at night.

At sunset, an insulating sheet — made of straw, pressed grass or canvas — is rolled out over the plastic, increasing the isolating capacity of the structure. The walls also block the cold, northern winds, which would otherwise speed up the heat loss of the greenhouse. 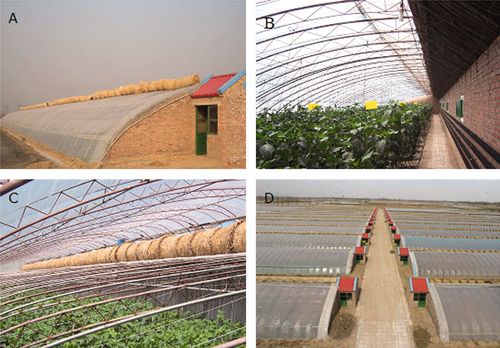 The incentive policy of the Chinese government has made the solar greenhouse a cornerstone of food production in central and northern China. One fifth of the total area of greenhouses in China is now a solar greenhouse. By 2020, they are expected to take up at least 1.5 million hectares. [1]

The first Chinese-style greenhouse was built in 1978. However, the technology only took off during the 1980s, following the arrival of transparent plastic foil. Not only is foil cheaper than glass, it is also lighter and doesn’t require a strong carrying capacity, which makes the construction of the structure much cheaper. Since then, the design has continuously been improved upon. The structure became deeper and taller, allowing sunlight to be distributed better and ensuring that temperature fluctuations are decreased. 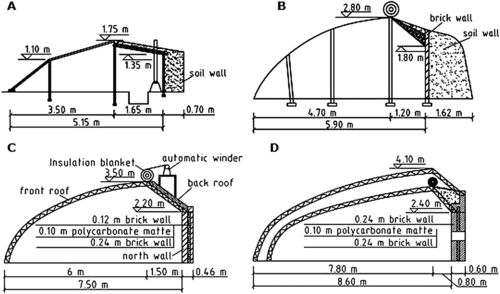 In addition, cultivators are increasingly opting for modern insulation materials instead of using rammed earth or air cavities for the insulation of the walls, which saves space and/or improves the heat absorption characteristics of the structure. Synthetic insulation blankets, which are better suited for dealing with moisture, are also seeing increased use. The old-fashioned straw mats become heavier and insulate less when they become wet.

In some of the more recent greenhouses, the insulation blankets are rolled up and down automatically, and more sophisticated ventilation systems are used. Some greenhouses have a double roof or reflecting insulation installed. In addition, the plastic foil used for the greenhouses — obviously the least sustainable component of the system — is continuously being improved, resulting in a longer lifespan.

Performance of the Chinese Greenhouse

The performance of the Chinese greenhouse depends on its design, the latitude, and the local climate. A recent study observed three types of greenhouses in Shenyang, the capital of the Liaoning province. The city is at 41.8°N and is one of the most northern areas where the Chinese-style greenhouse is built (between latitudes 32°N and 43°N).

The research was conducted from the beginning of November to the end of March, the period during which the outside temperature drops below freezing. The average temperature in the coldest month is between -15°C and -18°C (5 to -0.4°F). [1] 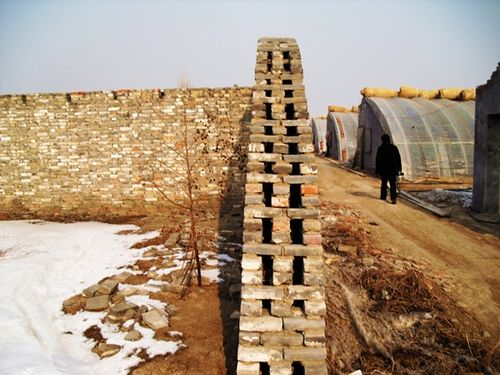 The three greenhouses studied all have the same shape and dimensions (60 x 12.6 x 5.5 m), but the walls, the plastic foil, and the transparent layer vary. The simplest construction has walls of rammed earth and an inside layer of brick to increase the structures’ stability. The covering is a thin plastic film that is covered at night with a straw blanket.

The two other greenhouses have a northern wall of brick with extruded polystyrene foam as insulating material, whereby the width of the wall can be cut in half. They are also covered with a thicker PVC plastic foil. The best greenhouse adds to this a reflective coating on the insulation blanket, further reducing heat loss at night. 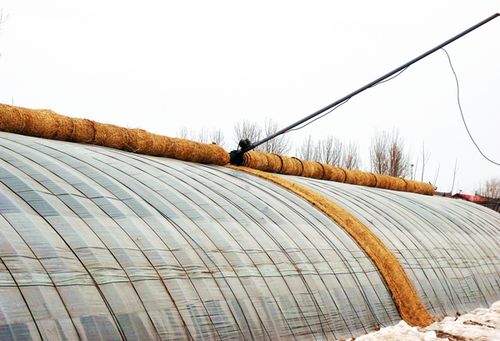 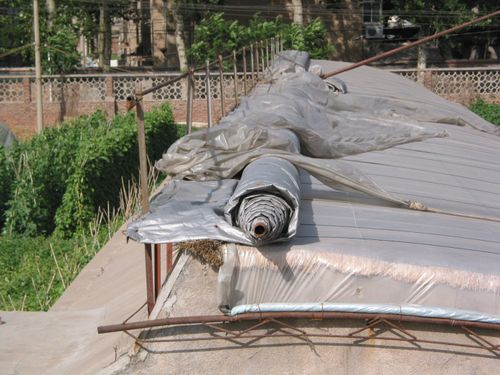 The night curtain of a solar greenhouse: Energy Farms.

In the simplest greenhouse the temperatures dropped below the freezing point from early December until mid-January. Without extra heating, this greenhouse cannot grow any produce at this latitude. Only the most sophisticated greenhouse – with its reflecting insulation layer – succeeded in keeping the inside temperature above freezing at all times, using only solar energy.

What’s more, the temperature stayed above 10°C most of the time, which is the minimum temperature for the cultivation of warm season plants, like tomatoes and cucumbers. Of course, passive solar greenhouses in more southern locations would require less sophisticated insulation techniques to be operated without additional heating.

If we go further north, similar solar passive greenhouses would require extra heating during the coldest months of the year, no matter how well they are insulated. Note that the farther north the greenhouse is located, the greater its slope will be. The slope of the roof is angled to be perpendicular to the sun’s rays when it’s lowest on the horizon.

In 2005, a Chinese-style greenhouse was tested in Manitoba, Canada, at a latitude of 50°N. A greenhouse that is 30 x 7 meters with a well-insulated northern wall (3.6 RSI glass fibre) and an insulation blanket (1.2 RSI cotton) was observed from January to April. During the coldest month (February) the outside temperature varied between +4.5°C and -29°C (40 to -20°F). While the interior temperature was on average 18°C (32.4°F) higher than the exterior, it turned out to be impossible to cultivate plants without extra heating during the winter. [2] 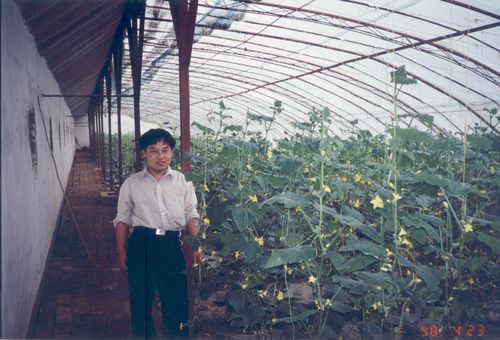 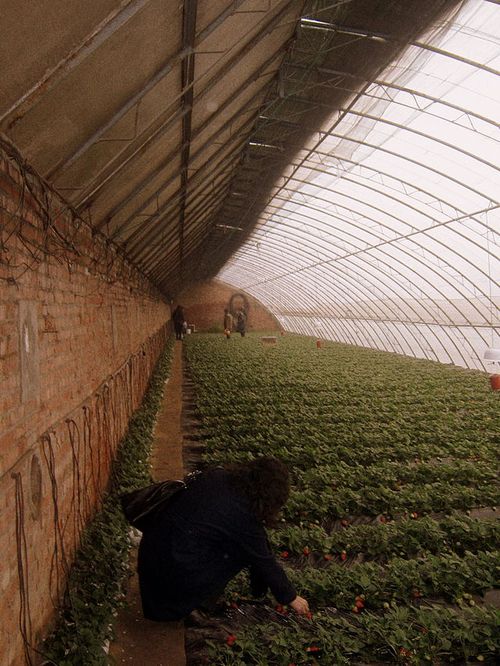 Nevertheless, energy savings can be huge in comparison to a glass greenhouse. To keep the temperature above ten degrees at all times, the heating system of the Canadian structure must deliver a maximum of 17 W/m2, or 3.6kW for the building. [2] In comparison, a glass greenhouse of equal proportions at the same interior and exterior temperatures would require a maximum capacity of 125 to 155 kW.

Thermal capacity can be further improved by placing black painted water storage tanks against the north wall inside the structure. These capture extra solar energy during the day and release it during the night. A different method to improve the heat retention of a greenhouse is by earth berming the north, east and west walls. Yet another solution to improve insulation is the underground or "pit greenhouse". [8] However, this greenhouse receives less sunlight and is prone to flooding.

The passive greenhouse could save a lot of energy, but a price would have to be paid: the profits generated by the Chinese greenhouse are two to three times lower per square meter than those of its fully glazed counterpart. In the more efficient Chinese greenhouses, an average 30 kg of tomatoes and 30 kg of cucumbers can be grown per square meter (numbers from 2005), while the average production in a glass greenhouses is about 60 kg of tomatoes and 100 kg cucumbers (numbers from 2003). [3] [4]. 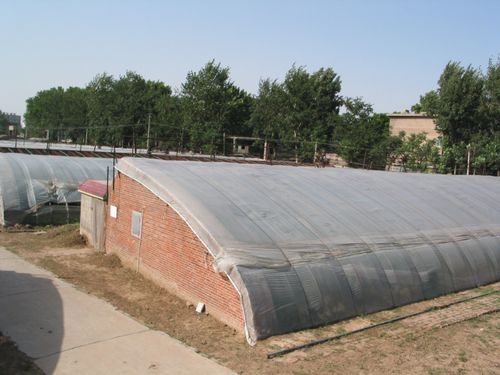 A passive greenhouse industry would thus take up two to three times as much space to produce the same amount of food. This could be viewed as a problem, but of course what really eats space in agriculture is meat production. A more diverse and attractive supply of vegetables and fruits could make it more viable to reduce meat consumption, so land use shouldn’t be a problem.

Another issue with a solar powered greenhouse is the lack of a CO2-source. In modern greenhouses, operators aim to have a CO2-level at least three times the level outdoors to increase crop yield. This CO2 is produced as a byproduct of the fossil fuel based heating systems inside the greenhouses. However, when no fossil fuels are used, another source of CO2 has to be found. This is not only an issue for solar greenhouses. It’s also one of the main reasons why geothermal energy and electric heat pumps are not advancing in the modern glasshouse industry.

In Chinese solar greenhouses, this issue is sometimes solved by the combined raising of produce and animals. Pigs, chickens, and fish all produce CO2 that can be absorbed by the plants, while the plants produce oxygen (and green waste) for the animals. The animals and their manure also contribute to the heating of the structure. Research of such integrated greenhouse systems has shown that the combined production of vegetables, meat, milk, and eggs raises yields quite substantially. [5] 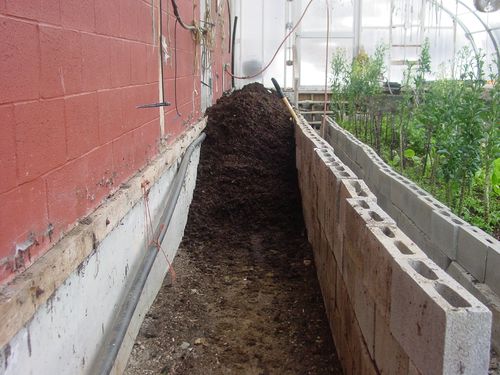 Justin Walker, an American now living in Siberia, is building an integrated system using horses, goats and sheep in a monastery in Siberia. Considering the harsh climate, the structure is partly built below-ground, while its protruding parts are earth-bermed. Above the barn area is a hayloft that provides further winter insulation as well as ventilation in the summer when it is empty. His compost heat recovery system produces hot water that is piped through radiant floor heating zones in the floor of the greenhouse. The CO2 is supplied by the animals. [6]

Heating and CO2-production can also be done without housing animals in the greenhouse. Their manure suffices. As we have seen in the previous article, the use of horse manure for heating small-scale greenhouses dates back several centuries in Europe, and in China it was practised already 2.000 years ago. Since the 1980s, several compost heated greenhouse have been built in the USA. These have shown that a greenhouse can be entirely heated by compost if it is well-insulated, and that the method drastically enriches the CO2-levels in the soil and in the greenhouse air. To add to this, the compost also serves to increase soil fertility. [6]