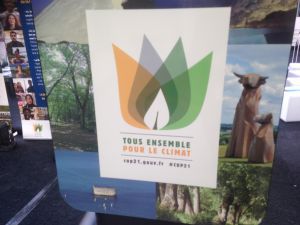 Today was the most thought-provoking day, at times viscerally so.  The logo for COP21 says ‘Tous ensemble pour le climat’, or "all together for the climate" (see right).  Yet today was a day when the battle lines felt clearly drawn, or rather the two extremes on display here came into stark, and alarming contrast.  Out at Le Bourget, the negotations continue.  Big disputes are opening up around whether the final agreement should be focused on limiting warming to 1.5 degrees, the only realistic solution as argued by the science, or 2 degrees, a pretty random figure that is politically expedient rather than actually useful, and which for some nations is already felt to be a huge stretch.  The small island states, those with the most to lose, are arguing for 1.5.  As the Guardian reports, " Saudi Arabia and India [are] flatly refusing attempts to even “reference” a UN study saying a 1.5 degree target was safer than 2 degrees".  "Shame on them", is the only legitimate human response.

For me, I had been invited to speak at Solutions COP21 at the Grand Palais, a huge venue built for the World Fair at the turn of the twentieth century, a vast building with a greenhouse roof.  The decision to speak at the event was one that provoked a lot of conversation and discussion in the Transition Network team, given that for many, the event was the great showcase of corporate greenwash at COP21. 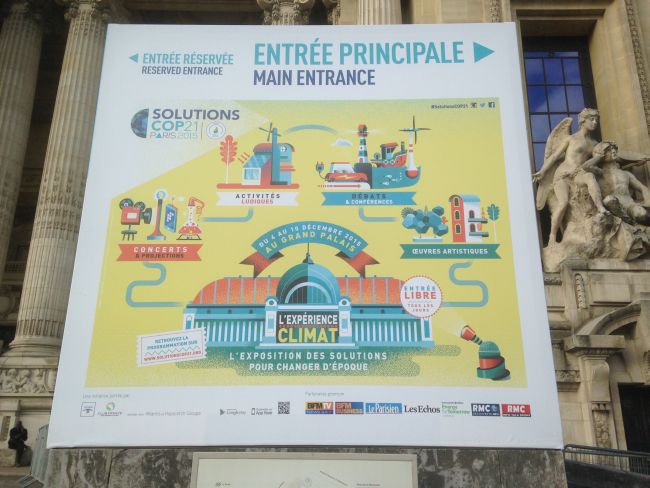 My sense with such things is that there one can often find reasons not to speak in places, but if I am invited, I usually go, seeing my role as being to speak to people, and to tell it how I see it, not what I in any sense feel I ‘ought’ to say.  You never know in such settings who you might touch and how it might affect peoples’ lives.  And so off to Grand Palais we went.  Just inside the door of the Palais was a large display explaining what the event was about.  Here’s what it said:

We hear a lot of talk about climate, and about COP21, but what do we know exactly?  How will climate change affect our daily lives?

In the mythical venue that was host to several world fairs, you can discover the solutions that are contributing to the fight against climate change.  It’s not just about adopting a responsible approach, but will also and above all an opportunity to improve our daily lives.  With new usages, new inventions, new professions, and practical existing solutions to take us to a post-carbon society.

For 7 days, more than 500 organisations, including 200 partners and associate partners – associations, scientists, academics, institutions, SMEs/SMIs, large corporations and regional collectives – will present their climate solutions and offer us a new vision and a unique experience.

Solutions COP21 is here to prove to both young and old that the commitment will be beneficial to each and every one of us.

Outside was a demonstration called ‘False Solutions’, drawing attention to the greenwashing going on inside, a demonstration which, it appeared to me, just wanted to hang up its banner with "No peace without climate justice" written on it.  The police present was huge, Robocop police with shields and batons and riot vans as far as the eye could see.

The first thing I did once we had got through the huge queues to get in, was to be part of a televised panel discussion/debate thing with Brice Lalonde,  Philippe Madec (architect), Jean-François Caron (The Mayor of Loos-en-Gohelle). It was all very swish, high production values, but one of those things where the host is so keen to ask the next question that as soon as you start answering yours, you get the feeling he wants you to finish again.  I think the video will be posted soon, but for now, here are some photos. 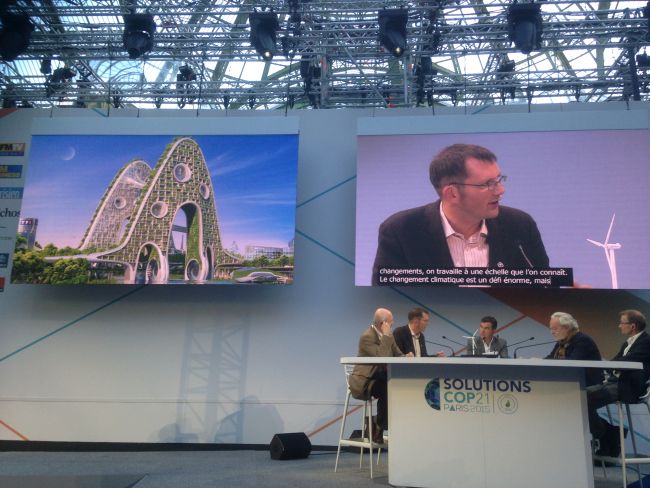 The TV show panel thing I was part of 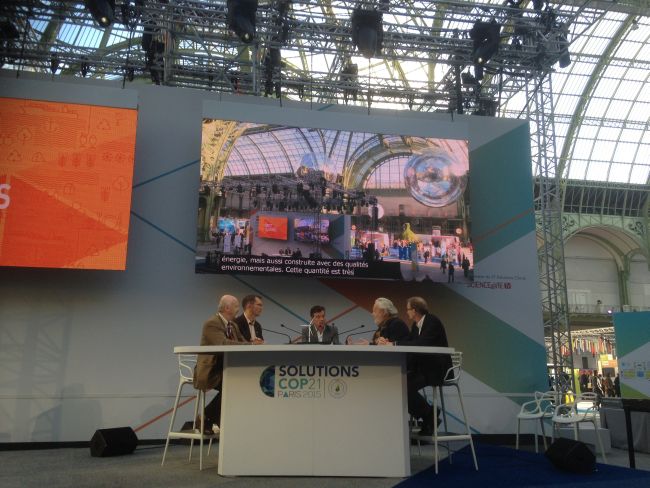 After that, Corinne of Transition Paris and I went for a walk around the exhibition to enjoy and experience the "new vision and a unique experience".   While the former is debateable, it certainly delivered on the latter.  Now I’m not someone to slag off any effort made by any company to green its activities just because they are a business.  There are some companies doing some great stuff, and we ought to give credit where it’s due.  I’m not against having an ‘expo’ for companies and organisations to celebrate and share the actual, meaningful work they are doing.

But what was mostly on view here was a vision of the future that would have you believe that the only contribution to a "post-carbon future" that communities, local economies and actual people could make is wobbly furniture made from old palettes, flowers made from recycled stuff and sticking things onto masks as an arts project.  Everything else needs big companies. And nowhere was the word "less" to be seen. 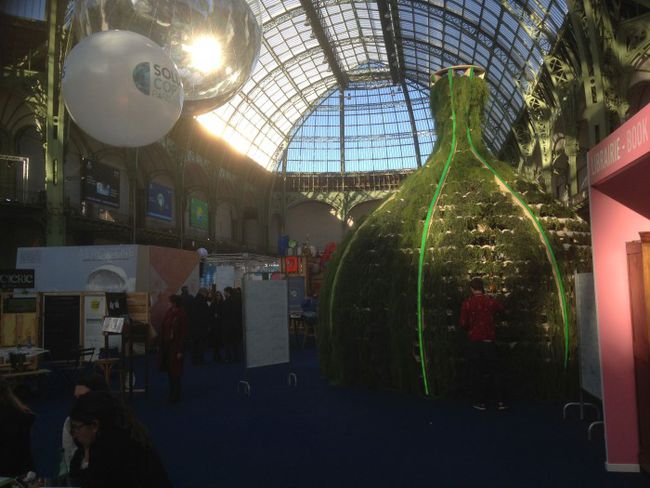 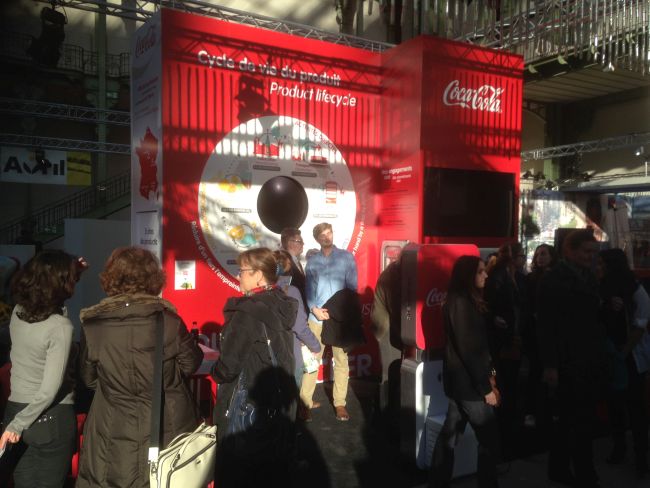 The experience included Renault Nissan presenting their electric cars, L’Oreal presenting themselves as ‘green’ due to being "committed to a sustainable sourcing of renewable raw materials", Coca Cola presenting themselves as being part of the solution due to the fact that 90% of Coca Cola is made in France.  There were ‘sustainable’ electric Formula One racing cars, all manner of dubious companies bigging up their green activities, such as energy companies, with no mention of the word "fracking", for example, appearing anywhere. 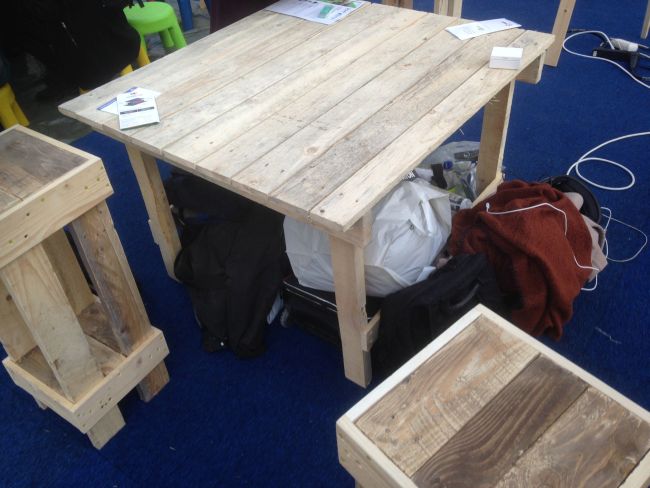 Tables made from old pallets. Very nice, but apparently they’re about as much as you can really expect from the grassroots. 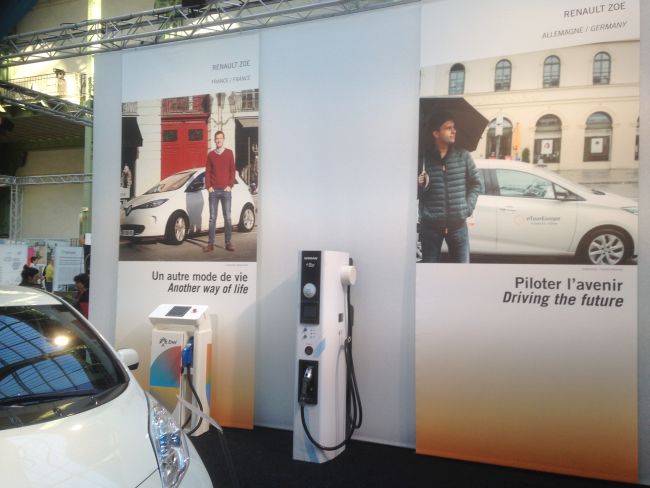 You have to wonder why the guys in both pics need an electric car, living in the centre of cities. Wouldn’t their greenest option be the Metro, or walking, or cycling?

A handful of demonstrators managed to get inside the building, and were quickly led out by groups of police.  It was quite something to see, the first time I have seen police snatch squads in operation.  A large group of plain clothes police, some marked as police but most not, would just pounce on someone and carry (literally) them out at great speed. 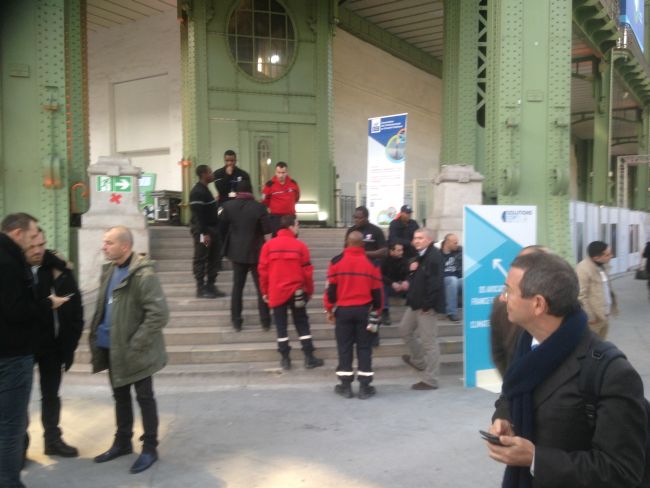 The police snatch squad awaiting its next victim

One moment you’d be standing talking to someone, and the next someone just near you would be lifted up and sped from the building.  Here’s my film to give you a taste of what it was like in there, which includes the moment two journalists were snatched and taken out, with the woman shouting "we have a press pass!".  It was deeply unpleasant.  Alternatively perhaps, the French police were modelling a new form of post carbon transport?  Or perhaps not..

Outside, as we left, the police were removing one demonstrator who had climbed to the top of a lamppost, and then it was clear that they were preparing to wade into the demonstrators.  One officer, with a tannoy, said "you must disperse, this is an illegal demonstration", and the riot shields and batons began to twitch, at which point we took our leave.  All deeply unpleasant, given that so far as I could see all the demonstrators wanted to do was to show their banner and blow a few whistles.  Yet the police operation was huge, with hundreds of riot vans and massive numbers of police.  The intolerance of dissent and the rush to over-the-top aggressive policing was deeply troubling. 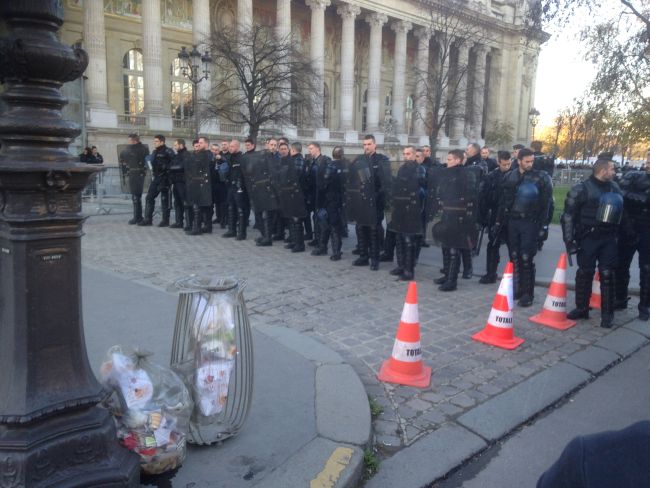 That evening we went to the Universite de la Terre near the Eiffel Tower for an event which included a section linked to the film Demain about which I waxed so lyrical the other day.  It was an odd event, which felt like three entirely unrelated things stapled together.  First there was a musical performance which mixed music by Handel and others with photos of the Calais refugee camp and some prose that told the Christmas story, ending with a choir singing "Hallelujah" from the balcony. 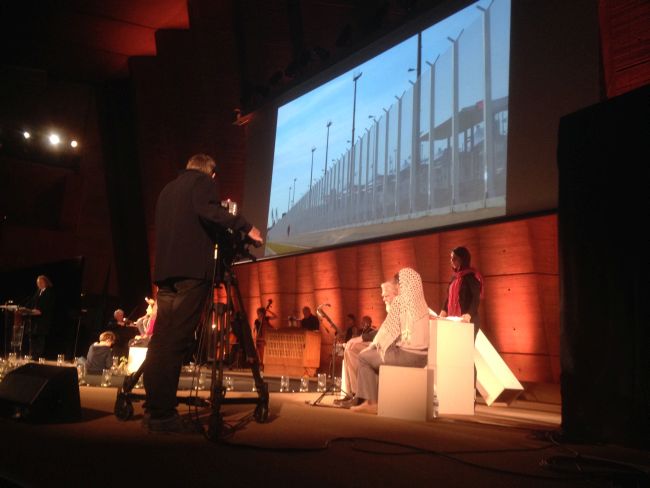 In the central part, Mélanie Laurent and Cyril Dion from Demain took the stage, and spoke about the film and took questions from the audience.  I was invited up and talked a bit.  At one point Cyril reflected powerfully on the recent terrorist events and spoke about how, for him, the stories in Demain, and their focus on reducing oil consumption, are one of the key ways of reducing conflict in the world. 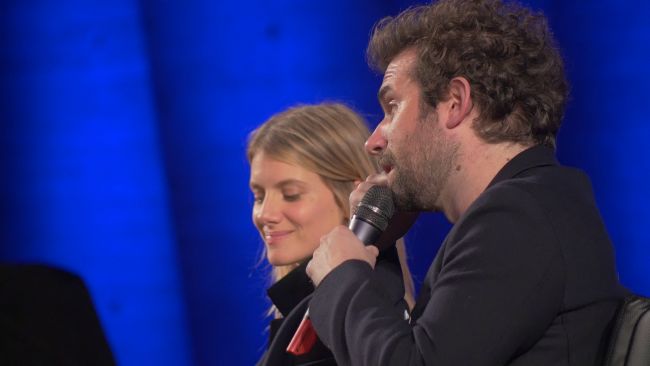 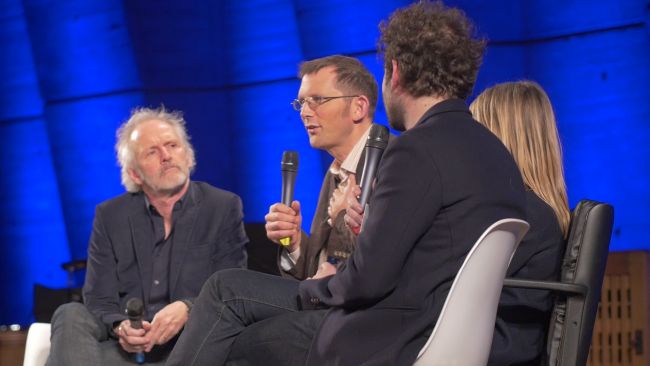 The last part of the evening was the ‘Farm for a Future’ awards, where 15 sustainable farmers talked about their work and awards were given out.  Brilliant to see so many young people passionate about food, farming, permaculture, doing things differently, connecting back to land.  One spoke movingly about how their farm was about producing honey, and building a refuge for bees in an area where they are under constant assault from industrial agriculture, pesticides and so on.  After that, we sold books for a while and met lots of people, and very enjoyable it was. 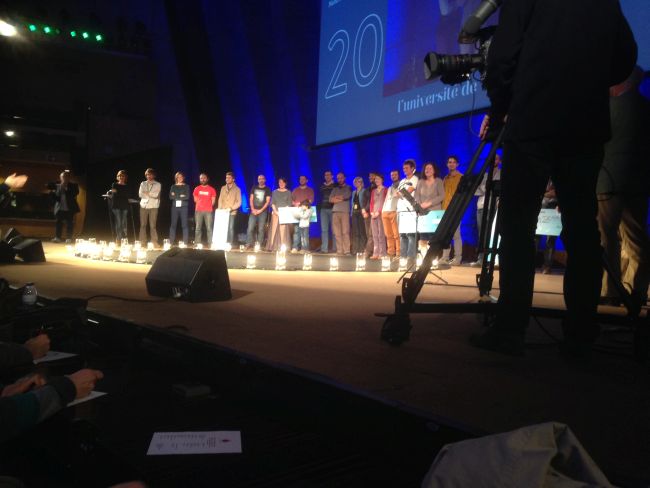 15 of France’s most sustainable farmers take to the stage.

What was most fascinating about an event called ‘Solutions COP21’ was the poverty of any actual solutions to be found under the vast ceiling of the Grand Palais.  For all the promise that we were about to "discover the solutions that are contributing to the fight against climate change", there was actually virtually nothing that would do that.

Corinne, my host, and I, got into conversation with a woman on a stall for a company who are building a huge tunnel under the Alps for trains.  "But isn’t there one already?", we asked.  "Well yes there is", she replied, "but this one would be bigger".  "But why does the tunnel need to be bigger?" we asked.  "The journey will be an hour shorter", she said, adding "and it could carry more freight, so it’ll save carbon".

We didn’t get into talking about the embodied energy of digging such a tunnel.  Or that actually taking a train through the Alps is something that most people don’t mind taking an hour longer as it is so gorgeous.  Or the opposition of communities living around the site.  Or why does everything need to always be getting bigger and faster?  The idea that our "post-carbon future" will be one of more, of growth, of corporations allowed to function as they please, was the overwhelming worldview on display at Solutions COP21. 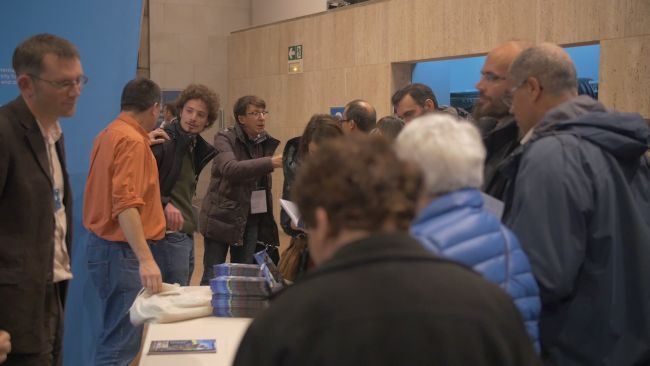 And yet the arguments challenging this, the growing number of voices questioning growth all around the world, as Demain does so powerfully, are growing steadily.  And as they grow, the backlashes against them grow more vociferous and more absurd.  There’s Leigh Phillips’ execrable book ‘Austerity Ecology’ which we reviewed recently, and a couple of days ago in the New York Times, Eduardo Porter wrote:

"Zero growth gave us Gengis Khan and the Middle Ages, conquest and subjugation.  It fostered an order in which the only mechanism to get ahead was to plunder one’s neighbour.  Economic growth opened up a much better alternative: trade".

My thanks to Emilio Mula for some of these photos. Please Don’t Read this Blog. Do Something Else Instead. What did Sisyphus Dream of?