Juan del Rio is the author of the recently published ‘Guía del movimiento de transición’, the first book about Transition in Spanish.  He has been involved with social movements and Transition for the last 10 years, and is part of an initiative in his town of Cardedeu near Barcelona.  We thought we should hear a bit more about the book and how it came to be, so we gave Juan a call.  We’ll start with a short video of him presenting Transition to people in his community of Cardedeu.

Why did you write this book?

For many different reasons. First of all, because I thought it was very interesting to bring the Transition model with the different, interesting experiences that are going on in Spain and to build with it a book that could help with the change of many communities that are already working in Spain.

At the same time, I thought it could bring a lot of energy to maintain the momentum of the movement in Spain, because on the one hand it’s growing, but on the other hand there are a lot of difficulties and barriers and so many other things. Also because in Spanish-speaking countries we have a lack of a tool like this one, talking about Transition adapted to our own reality, and in Spanish. 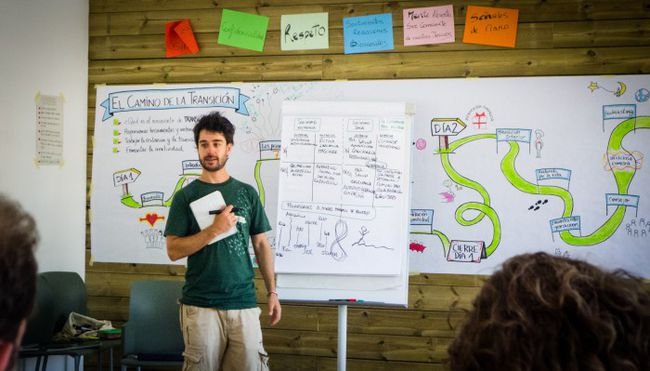 So I thought that it would be nice to bring together my learnings of the last few years with a lot of research from other Transition initiatives, and many other experiences and initiatives from all over Spain and other places. Lately I’ve been able to say that there is a very nice personal challenge, so I thought – why not, let’s go ahead.

There have been a few books on Transition published already. But this was written in Spanish, with Spanish-speaking people as its audience. How have you communicated Transition to that audience? Is there a Spanish approach to Transition and if so, how is it different? 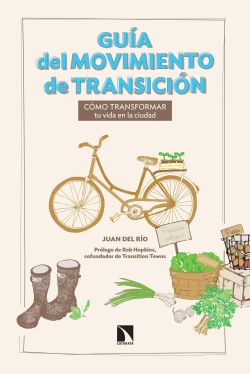 Also by talking about the context, about the situation in a way that I could include not just the global problematics but also including the perspective of southern European countries with the economic crisis etc. And also including resources more adapted to the Spanish and also Latin American context and explaining the connections between different initiatives and movements, not only the Transition movement in Spain. One of the aims of the book is to build bridges between different movements in Spain.

It’s difficult to say if there’s any specific way from Transition in Spain. I guess that it wasn’t something that I thought before, but I’m sure that once the book is read by many people, I might be able to recognise these specific aspects that make Transition special here, or different, let’s say.

What are your hopes for the book?

First of all I’d like to help people and initiatives with their own Transition process. This doesn’t mean that the book has a solution, not at all, but within this long Transition process that we are working on now, I hope it can bring some useful tools and information, and also to make the movement more visible in Spain and Spanish-speaking countries. And go empower the initiatives: sometimes they feel a bit alone, and when I was interviewing many people for the book because I want to show many different projects.

I was saying to them – look, how nice, how important what you are doing is. They were more like "I’m just working with my gardens or with my local community etc". But I think this kind of thing really can empower them, and try to show what is happening around us. That’s why in the book I talk about this new Transition that’s happening around us.

More specifically, I talk about new Transition at the beginning, in the introduction, because we had in the 70’s the transition from the dictatorship to the democratic state. So that’s why, when you talk about Transition, when you see the word ‘transición’ in Spanish, 95% of people would relate that word to that specific moment in the 70’s. So I thought it was important to explain this, and I hope it can be useful. That’s the main point, and for a next step, just to continue with this process in Spain.

Language is very powerful and the meaning of the words change. So of course you need to find a way, because for me Transition is a specific key word for the book, definitely. But that’s why on the cover we talk about "the guide for the Transition movement", because the word ‘movement’, even though it wasn’t in my idea for the title, it was a way of saying "this is not about the Transition most of us know, but another thing, a movement that is already happening right now, and not only here but in many different countries". So that was more or less the challenge, let’s say.

Can you give us a sense of the current state of Transition in Spain? How’s it going?

As a movement, it’s definitely growing, as with many other projects and initiatives, with many different names or brands, or however you want to call it.  But also it’s this situation when the system is starting to collapse or at least struggling with many different problems, that you really need to surf the waves. 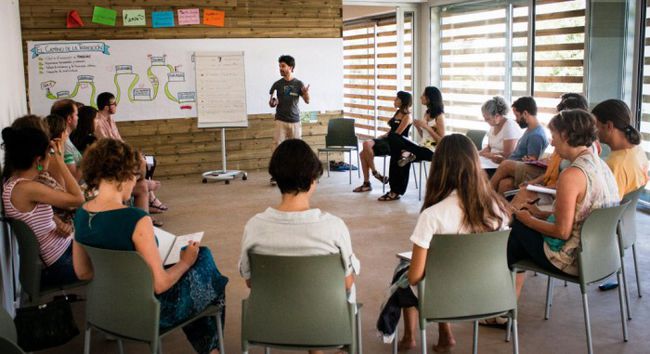 At the same time, there are many initiatives, but it’s very difficult for them to consolidate themselves to really go forward, because they have difficulties finding resources, but also because we are trying to be a new kind of society.  We are not used to working in much more collaborative ways.

We are starting to learn about how to make decisions in different ways, about how to do things in a more particular way. So I’d say that there’s a lot of energy that in an organic way is flowing to make initiatives appear, but not all of them succeed and this is the situation.

Specifically, we have between 50 and 55 local initiatives in Spain, and the Spanish Transition Hub has been working for about the last 2 ½ years. Now it’s pretty much consolidated and we are working on many different projects. I hope this book is going to help to make this Transition a little bit stronger in Spain.

You’ve been involved in various forms of social activism and also acted as a Transition trainer. What’s your sense of what Transition brings to activism and for social change that’s unique or maybe wasn’t there before?

The emergence of this recipe, putting all these ingredients together, makes Transition special, at least in my opinion. Things like the balance between this inner work and these outer and more pragmatic projects is something in my opinion very strong, and makes the Transition movement very special. 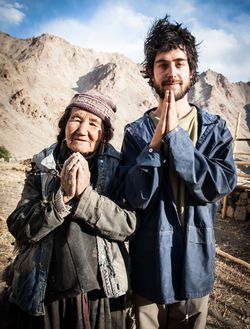 Also this balance between how to acknowledge that we have very strong problems like peak oil, climate change, economic crisis etc, but at the same time not being so catastrophic as to say – this is there, I’m not denying it, but at the same time there are possibilities for things. So this constructive way of working with these problems and bringing hope to the community is something very strong and I think it’s something very useful for the Transition.

I could say that there is this focus on practicality that I think specifically brings something in a context like Spain, that we are discussing whether we want things to be perfect. Also, the participatory tools and methodologies that it brings to the group, this is something very rich that many of the social movements are starting to learn a bit, but it’s something key from the structure of Transition, and a very important tool. It’s more like the emergence of everything together than any specific thing, in my opinion.

Lastly, this is the first book you’ve written. How did you find the process of writing this, how has the experience been?

I would say it has been intense, I’ve learnt a lot, and it’s this process of how to put into words the things that you have been experiencing during the last years, that it makes something very magical to write a book. But I have to say, on the other hand, it’s very tiring too. Maybe at the end of the book I was even thinking – does what I’m writing even make sense? Is it too depressing for people? Because you are alone, it can be difficult.

It has been like a birth, and it’s out – I don’t know if you say in the UK that at least each person could plant a tree, write a book and have a child. I’ve done the first two, but somehow this feels like my first child. So I’m very happy.

[Here is the podcast of our full conversation].