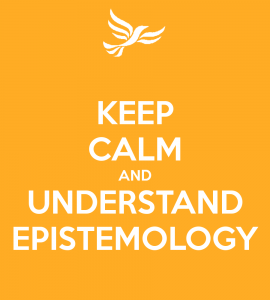 (From Wikipedia) Epistemology (ἐπιστήμη, episteme-knowledge, understanding; λόγος, logos-study of) is the branch of philosophy concerned with the nature and scope of knowledge[1][2] and is also referred to as "theory of knowledge". Put concisely, it is the study of knowledge and justified belief. It questions what knowledge is and how it can be acquired, and the extent to which knowledge pertinent to any given subject or entity can be acquired. (image source)

A few weeks ago, someone barreled into the comment section of a post on climate change on the blog of the Italian Society of Chemistry (SCI) with a series of attacks against climate science and climate scientists. The ensuing clash was all in Italian but, if you follow the debate on climate, you know very well how these things go. The newcomer monopolized the discussion by repeating the usual legends; climate has always been changed, there has been no temperature increase during the past 15 years, there is no proof of the human effect on climate, and so on. And you can imagine how the scientists following the blog reacted. The discussion rapidly degenerated into assorted insults and personal smears, until the moderator closed the comments. That was way too late: the climate science denier emerged as the winner; while the scientists managed to give the impression of being both narrow-minded and sectarian.

It was a classic case of climate trolling, but with one difference. This time, the troll didn’t try to hide his identity (as trolls usually do); rather, he came with a name, an address, and a CV. He was Mr. Rinaldo Sorgenti, vice-president of the Italian Coal Industry Association ("Assocarboni"). Mr. Sorgenti’s exploits on the SCI blog give us a chance to understand what generates the kind of behavior that we define as "trolling." So, I am willing to bet that Mr. Sorgenti is NOT a paid disinformer – as he was accused to be in the debate. In other words, he doesn’t deny climate science because he is on the payroll of Assocarboni (actually, he maintains that he gets no money for his position of vice-president, but I figure he gets at least a few perks from it). I would also say that not even the opposite holds true: Mr. Sorgenti is not the president of Assocarboni because he is a climate science denier. No, I would bet that denying climate science and being involved in the coal industry are two non-separate and non-separable elements of Mr. Sorgenti’s worldview has little or nothing to do with what we call science. Mr. Sorgenti is not a scientist, he doesn’t know how the scientific method works or, if he knows, he doesn’t believe it works or it is useful for anything. He uses the methods of debate commonly used in the political debate; a method of discussion that we can define as "rhetoric."

Mr. Sorgenti’s case is not isolated. Over several years of debate (if we may call it in this way), I came in contact with a number of people who can be defined as "trolls" or "deniers". Most of them (including Mr. Sorgenti) believe (genuinely, I think) that you can use the methods of the political debate to arrive to a conclusion on a complex and difficult scientific field such as climate science; and they resent being shortly dismissed by scientists. Scientists know how much work and study is needed to understand climate science and resent what they saw as superficiality and approximation in the debate. The result is the kind of clash we saw on the SCI blog. It was, if you like, a clash of epistemologies: rhetoric against the scientific method.

As in all clashes of absolutes, debaters think they are speaking the same language and they start from the same assumptions, but they are not. The problem is identified by Adam Dawson on "The Ruminator"in these terms:

….. you have to understand that in America there are two different types of science. There’s science that is profitable for corporations, which is good and righteous and rock solid. That’s the Smartphone, the water heater, the GPS, the 700 channels on the 62 inch flat screen, the boner pills, and so on and so on. And then there’s the science that costs corporations money, which is fraudulent, con-artist mumbo jumbo. Under that second definition are things like climatology, pollution measurements, oceanography, and other disciplines that might fuck up the profit margins of energy producers and manufacturers.

I think Dawson is right on target about the "two different types of science", but the point is not so much that some types science cost corporations money. Science and technology push for change and change often means that someone will lose money, but that doesn’t mean that change is impossible. The Internet, for instance, is bankrupting newspapers, but the newspaper lobby doesn’t appear to be very effective in stopping the Internet from expanding. Rather, the fundamental point is that scientific fields such as climate science use different methods for gathering data and managing knowledge than, say, the science of solid state devices. It is an epistemological difference: the kind of certainty that can be derived from a well designed laboratory experiment performed on a solid state device is not possible in climate science.

The different epistemological approach becomes really fundamental when it is question to implement a policy based on the result of the models. Climate scientists mostly agree that there is no simple technological remedy to avoid disastrous climate change. Then, what we are proposing is not hard engineering, but some kind of social engineering based on a general consensus that the danger of climate change is real. Now, how do we obtain such a consensus? To start, we need to share the basic assumptions on how the conclusions of climate science are obtained and validated; this is a question of epistemology. And when we deal with social matters, the traditionally accepted methods of attaining knowledge (and consensus) are not based on the scientific method. The debate becomes political, and the methods used for political debates are completely different. As I said, it is a clash of epistemologies.

In many ways, we seem to be learning to use different epistemological methods in the climate debate: have you noticed the claim that there exists a "97% consensus" among scientists on the climate problem? It has had a remarkable impact; considering how rabidly it has been criticized on the deniers’ side. But can you think of a single case in the history of science when a scientific controversy has been subjected to a majority vote? Never that I know. In science, we believe that the scientific method is sufficient to arrive to a consensus. Political controversies are a different thing; data and interpretations are much more uncertain; hence the need for a vote.

I am not saying that science should turn into a political organization. It is already something, however, that we recognize what we are dealing with: it is a political debate, not a scientific one. And we need to recognize that to stiffen up and look offended when someone belittles climate science is not useful. Even worse is to state that someone is a paid disinformer because he is not using the scientific method. We need to be way smarter than that if we want to go somewhere in fighting climate change.