This text was originally published as part of "Disrupting the Future", a series of essays correlated to "2052", a book by Jorgen Randers

… and when he sowed, some seeds fell by the wayside, and the fowls came and devoured them up: some fell upon stony places, where they had not much earth and forthwith they sprung up, because they had no deepness of earth: and when the sun was up, they were scorched; and because they had no root, they withered away. And some fell among thorns; and the thorns sprung up, and choked them: but other fell into good ground, and brought forth fruit, some a hundredfold, some sixtyfold, some thirtyfold. Who hath ears to hear, let him hear. (Matthew 13.4-9). 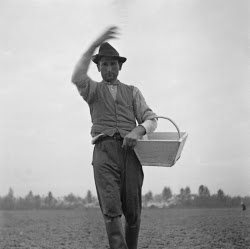 Abstract. In order to survive the double threat of resource depletion and climate change we need to move as quickly as possible to a sustainable society based on renewable resources. We are already moving in that direction, but we are still investing huge amounts of money to perpetuate our dependency on fossil fuels. Here, I argue that the transition can be eased and accelerated if we adopt the “sower’s strategy.” Farmers, as well know, must not eat their seed corn; they must keep some of the harvest for the future. Applied to the world’s economy, the sower’s strategy dictates that we use part of the energy and resources produced by means of fossil fuels to build renewable energy plants and a sustainable economy. This strategy is primarily something to be agreed upon but it could also be embodied in an international protocol (the “sower’s protocol”?) that would mandate that a fraction of the worldwide revenues from fossil fuels should be invested in sustainability and renewable energy.

“Don’t eat your seed corn!” is a well known saying. It refers to the age-old farmer’s strategy of saving some of the harvest of the current year as seeds for the next. Unfortunately, however, our main energy source today, fossil fuels, produce no “seeds.” Once extracted and used, they are gone forever and the same is true for all our mineral resources. This is what we call “depletion.” In addition, fossil fuel burning is the main cause of climate change; an even more worrisome problem.

So far, we have been behaving like farmers who eat their seed corn; burning fossil fuels and consuming our resources as fast as possible. And we are still investing enormous amounts of money just to continue doing that. According to the Grantham research institute, about 650 billion dollars were spent to develop new fossil fuel resources in 2012, mainly for oil and gas and, in particular, for the so called “non conventional resources” (e.g., shale oil). This is the result of our current way of thinking which emphasizes short term gains. Not only does this strategy worsen the climate problem, but it forces us to spend more and more as depletion progresses and that perpetuates our dependence on fossil fuels. Obviously, that can’t continue for a long time.

Is there a way out? Yes, if we go back to the wisdom of ancient farmers: don’t eat your seed corn! Of course, we can’t sow fossil fuels but we can sow what these fuels provide: energy and minerals. We can use some of this energy and these minerals as seed to create the structures needed for a sustainable economy until, in the future, renewable energy eventually produces enough “seed” to replace itself and we learn how to recycle minerals much more efficient than we do now. This is the sower’s strategy applied to the modern world.

We are already using this strategy. At present, most of the resources used to build renewable energy plants and other elements of a sustainable economy come from fossil fuels. It is good that we are doing that, but are we doing enough? According to UNEP, some 250 billion dollars were spent in 2012 for new renewable sources. This is much less than what is being invested in fossil energy but, so far, it has nevertheless allowed a rapid and consistent growth of renewable energy. The problem is that there is no guarantee that the necessary levels of investment will be maintained in the future if we continue giving priority to fossil fuels. Already in 2012, indeed, we saw a decline in the investments in renewables. So, if we leave choices on energy to the market alone, we risk facing runaway climate change together with rapid resource depletion without having sufficient resources available to create a new energy system. If we continue along this path we will eat all our seed corn.

Instead, we need to save our seed corn. It means investing a significant fraction of the energy and resources we are producing today into a sustainable economy even though that may not provide the largest short term returns. First of all, it means investing in renewable energy. This is to be intended as energy technologies that don’t produce greenhouse gases, are efficient in term of energy return for energy invested (EROI) and don’t occupy too much land; in particular photovoltaics and wind. It also includes infrastructures and industrial technologies which tend to recover resources and avoid the use of rare and disappearing mineral resources. The concept of “efficiency” can also be included, with the caveat that it must perpetuate dependency on fossil fuels (an example of an ineffective strategy in this sense is moving from coal to natural gas).

Then, how do we implement the sower’s strategy? It may not need formal measures; we can see it as a form wisdom that already exists in people’s minds and that leads to supporting investments in renewables in general. But we can also think of an international protocol (the “sower’s protocol"?) mandating that a fraction of the revenues obtained by fossil fuels must be dedicated to the development of a sustainable economy; in particular renewable sources. The protocol could be based on the revenues from a carbon tax but, perhaps better, it could directly act on private or state owned energy companies. After all, investing in energy production is their job and we are not asking them to pay money, we are asking them to make money; albeit on a longer time scale. The protocol could also mandate non-monetary measures, such as for governments to ease permits and reduce bureaucracy for investments in sustainability.

No matter how implemented, the sower’s strategy implies that we need to invest enough to create a new energy system before depletion (or global warming) makes it impossible to do so, but not so much that it would be an excessive burden on people’s welfare. It is a window of opportunity that will not be there forever, but which probably still exists today. Consider that the 58 largest world’s oil and gas companies together collected in 2012 revenues for almost 6 trillion dollars (wikipedia). If they were to re-invest just 4% of those revenues in renewable energy, that would double the amount spent today in the sector.

Independently of the actual fraction to be set apart, we can say that the sower’s strategy, especially if implemented as a formal protocol, could be a true game changer in sustainability since:

1. It speeds up the transition, ensuring that sustainability and renewable energy will remain consistently supported.

2. It diverts investments from fossil fuels, forcing them to decline faster than they would if left to market forces alone. That speeds up the transition and eases the problem of global warming.

3. It stimulates the economy and creates jobs. It has the force of a positive approach: we are not asking people to stay home in the dark: we are asking them to work for the transition and make money on it!

4. The well known principle: “do not eat your seed corn” is something that everyone can understand. It will be hard for negative propaganda to distort it so much to make it appear as part of a Communist plot to enslave mankind (but never underestimate the power of PR).

The sower’s strategy by itself, formally or informally implemented, does not guarantee a smooth transition to a sustainable (and cool enough) world. It can’t go against the laws of physics and it can’t allow humankind to continue growing forever. Adapting our economy to renewable energy requires new infrastructure, rethinking industrial processes, adapting to the gradual reduction in the availability of all mineral resources. Among other things, we’ll need to learn how to use renewable energy to power agriculture, to replace rare minerals with common ones (e.g. copper with aluminum), to manage waste as a resource and not as a burden, and much more.

Clearly, building up a completely sustainable economy is a difficult task, but it is not an impossible one. The only impossible thing is to keep civilization alive without energy and resources. The sower’s strategy may give us a chance for doing that.

Every year, our farmer ancestors faced a choice: how much of their harvest to keep as seeds? Save too much, and they would starve that year; save too little and they would starve the following year. But they must have been making the right choices because they survived and we are their descendants. Today, we can learn from our ancestors how to make the right choices with fossil fuels too: save enough of their energy now to have enough energy in the future and also avoid disastrous climate change. Who hath ears to hear, let him hear.