This is the third post of comments on the "NASA-funded paper" (a term that went viral) on societal collapse by Motessharry, Rivas and Kalnay (MRK). In my first post on the subject, I noted some qualitative features of the model. In the second post I commented on the debate. Here, I am going more in depth in the structure of the model and I think I can show that the results of the MRK model are very general as they can be reproduced with a simpler model. In the end it IS possible to destroy a civilization by spending too much on non-productive infrastructures – such as the Moai of Easter Island (image above from Wikimedia, creative commons license)

Mathematical models may be a lot of fun, but when you use them to project the future of our civilization the results may be a bit unpleasant, to say the least. That was the destiny of the first quantitative model which examined the future of the world system; the well known "The Limits to Growth" study, sponsored by the Club of Rome in 1972. This study showed that if the world’s economy was run in a "business as usual" mode, then the only possible result was collapse.

This kind of unpleasant results is a feature of most models which attempt to foresee the long term destiny of our civilization. Not that it should be surprising considering the speed at which we are wasting our natural resources. Nevertheless, whenever these studies are discussed, they generate a lot of criticism and opposition. It is the result, mainly, of emotional reactions: there is nothing to do about that, it is the way the human mind works.

But let’s try to put aside emotions and examine a recent study by by Motessharry, Rivas and Kalnay (MRK) on the destiny of human society that became known as the "NASA funded model" after a note by Nafeez Ahmed. The model has attracted much criticism (as usual) but it is worth looking at it with some attention because it highlights some features of our world which we should try to understand if we still think we can avoid collapsing (or at least mitigate it).

The MRK model has this specific feature: it divides humankind in two categories, "commoners" and "elites", assuming that the first category produces wealth while the second doesn’t. In some assumptions, it turns out that the elite can completely drain all the resources available and bring society to an irreversible collapse, even though the resources are renewable and can reform the initial stock.

I think this is a very fundamental point that describes events which have happened in the past. As I noted in a previous post, it may describe how the Roman Empire destroyed itself by excessive military expenses (we may be doing exactly the same). Or, it may describe the collapse of the society of Easter Island, with a lot of natural capital squandered in building useless stone statues while putting a high strain on the available resources (the story may be more complex than this, but its main elements remain the same)

So, it looks like elites (better defined as "non productive elites") may play a fundamental role in the collapse of societies. But how exactly can this be modeled? The MRK model does that using an approach that, as I noted earlier on, is typical of system dynamics, (even though they do not use the term in their paper. Not only that, but it is clearly a model in the style of those "mind sized" models which I had proposed in a paper of mine. The idea of mind sized models is to avoid a bane of most models – of all kinds – that of "creeping overparametrization". Since, as a modeler, you are always accused that your model is too simple, then you tend to add parameters over parameters. The result is not necessarily more realistic, but surely you add more and more uncertainty to your model. Hence, the need for "mind-sized" models (a term that I attribute to Seymour Papert)

So, let me try to rework the MRK model; simplifying it a little and making it more streamlined. Instead of speaking of "elites" and "commoners", let us speak of two different kinds of capital. One kind we call "productive", the other "non productive". Capital is the result of the exploitation of natural resources. "Productive" capital is the kind that leads to further exploitation and growth of the economy; the other kind is capital which is simply wasted.

So, can we build a model that includes these elements? Surely we can; here is a version of the model in the style of "mind sized" models. (done using the "Vensim" software). 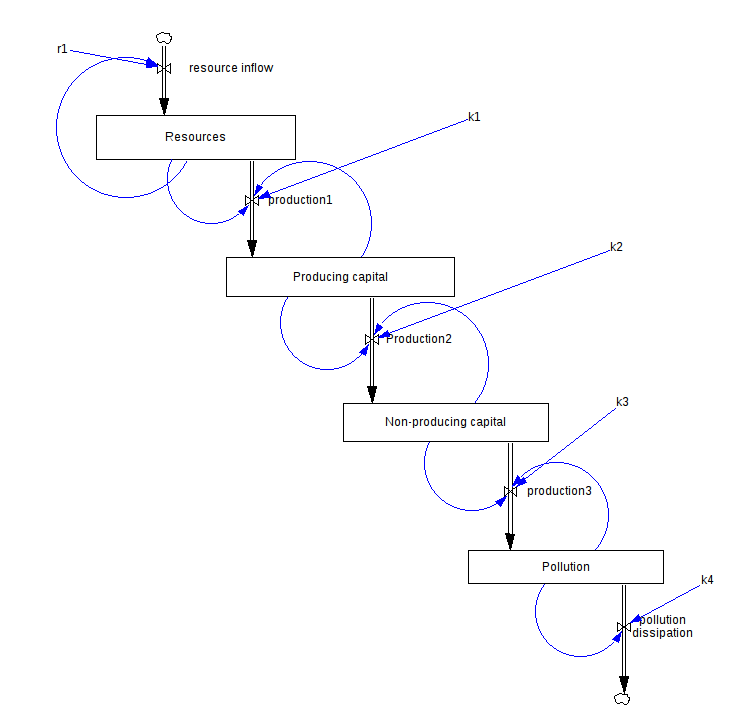 The model is a streamlined version of the MRK model, where I added a "pollution" stock (missing in the MRK model) and where I simplified the productive cascade structure. It would take some time to explain the model in detail and there is not enough space here. If you want to go more in depth in this subject you can read my paper on "Sustainability" or this post of mine with the rather ambitious title of "peak oil, entropy, and stoic philosophy." But, please, understand that the model, though very simplified, has a logic; what it does is to describe the degradation of the thermodynamic potential of the starting resources (the first box, up left) into a series of capital reservoirs which, eventually, dissipate it in the form of pollution. The "Ks" are constants which determine how fast capital flows from one stock to another. The arrows indicate feedback: we assume here, for instance, that the production of industrial capital is proportional to the size of both the resources and capital stocks.

Now, let’s go to the results obtained with some values of the parameters. Let’s take r1=0.25, k1=0.03, k2=0.075, k3=0.075, k4=0.05. The initial values of the stocks are, from top to bottom, 5, 0.1, 0.1, 0.01 – you may think of the stock as measured in energy units and the constants in energy/time units. With these assumptions, the model produces the same phenomenon that MRK had observed with their model. That is, you observe the irreversible collapse of the system, even though the natural resources reform, becoming abundant as at the beginning of the cycle. 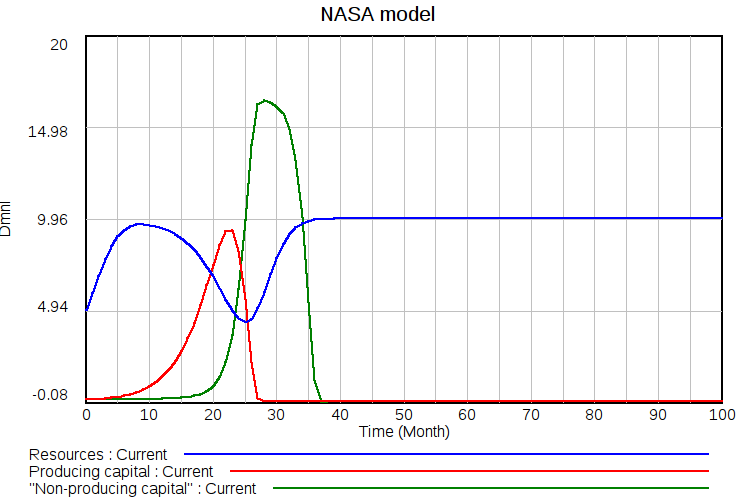 You see? Producing and non-producing capital (which MRK calls "commoners" and "elites") both go to zero and disappear. But note how the natural resources reform and return to their former value (actually higher than at the beginning!). This civilization had destroyed everything and won’t restart to accumulate capital again for a long, long time. Note also how these results depend on the assumption that non-producing capital cannot be turned into producing capital. It is maybe a drastic simplification, but it is also true that turning swords into plowshares is a nice metaphor, but not something easily done.

At this point, let me say that this post is just a sketch. I can tell you that it took me about 15 minutes to write the model; a few hours to test it, and about one hour to write this post. So, these considerations have no pretense to be anything definitive: the model needs to be studied much more in detail. When I have time (and as soon as I can fix my cloning machine) I would like to write a full paper on this subject (anyone among the readers would like to give me a hand? Maybe someone with a better cloning machine than mine?).

Nevertheless, even though these results are only preliminary, I think that the fact that the MRK results are so easily reproducible indicate that there is something there. They seem to have identified a feature that, so far, most models had neglected. Although you can always accumulate capital by exploiting natural resources, the final outcome depends a lot on how you spend it. The model tells us, for instance, that a popular recipe to "save the economy" by "stimulating consumption" may actually destroy it faster.

So, are we destroying ourselves because we are wasting our natural capital in useless tasks, from battle tanks to SUVs? (and lots of bureaucracy and an overblown financial system, too). Are we destroying our civilization by building these useless structures just as the Easter Islanders destroyed themselves by building Moai statues? It is something we should think about.

Note 1: I think this model has a lot to do with Tainter’s idea of the "declining returns of complexity, if we take "complexity" to mean that lots of resources are used to build something that produces nothing. I already tried to model Tainter’s idea with a mind-sized model in a previous post of mine and I am sorry to see that Tainter didn’t like so much the MRK model. But I think it is mostly a question of different languages being used. If we work on communication, I think it is possible to find a lot of points of contact in the different approaches of modelers and historians.

Note 2. Doesn’t this model contradict the conclusions of my book "Extracted", that is that our society is collapsing as a result of the depletion of mineral resources? No, it doesn’t. The parameters I used for the run shown here are chosen to reproduce the results of the MRK paper, which assumes that resources are fully renewable. You can run this model in the hypothesis that resources are NOT renewable, which is an assumption closer to our situation. In this case, the model will tell you that the system will collapse leaving unused a large fraction of these theoretically exploitable resources; the larger the more overblown the non-productive capital stock will turn out to be. This is something that I think is very relevant to our situation: we saw it happening with the financial crisis of 2008 and the next financial crisis, I believe, will generate again this effect. (h/t Tatiana Yugay)