Ruth Potts is the co-author, with Andrew Simms, of a pamphlet called The New Materialism, founder of Bread, Print and Roses, and organiser of the recent ‘Festival of Making’. She describes her work as "inviting people to fall in love with stuff in a good way".  We sat down with Ruth under a tree in the Healthy Futures garden in Totnes to pick her brains about materialism, "stuff" and what a new relationship with stuff could look like.

What’s wrong with materialism Ruth? Surely people only buy iPads because they need them?

I guess what we’re saying in the pamphlet is that there isn’t anything wrong with materialism. We are after all part of a material world. We live in a physical world, we’re part of that physical world. But we think materialism has become synonymous with a sort of passive and destructive consumerism so that we are persuaded, to paraphrase the economist Tim Jackson, to buy stuff we don’t need often for people that we don’t really like in order to create an impression that won’t last.

We’ve been persuaded, in an economy that is driven by the need to produce ever more, to buy stuff that doesn’t make us happy. We’ve been caught in a hedonic treadmill in which we’re constantly chasing the next thing. I think that the response of the Green movement to date has been either this hair-shirt miserablism where we’re told that we ought to reject stuff altogether, or it’s been replacing one kind of fairly unhappy consumerism with another, so you can have a Prius, you can have your designer shoes, your Jimmy Choos, as long as they’ve got a bit of recycled material in the sole. 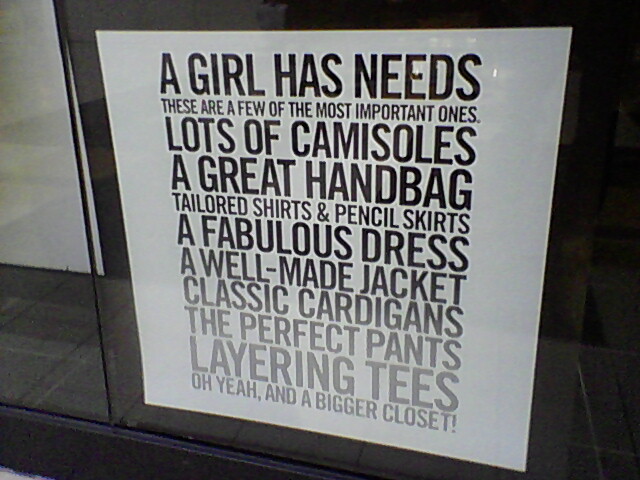 I think there’s another way that we could be approaching this and I think the Green movement has been missing a trick, because actually the Green movement has distilled a different kind of materialism for decades. We know that living within our means both socially and environmentally involves things like repairing more, reimagining things we already have, recycling and many other activities prefixed with ‘re’.

The Green movement knows how to live better and I think the exciting thing about this is that by mending and caring for the stuff we already have, we enter into a different relationship with stuff which is about long-term lasting caring relationships rather than the slightly abusive consumer relationship. 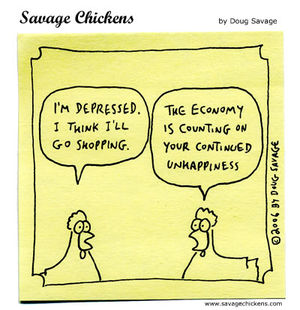 The added benefit of that in the context of the current situation where we’re entering a period of austerity where the government is telling us to get out of the debt crisis at least in terms of household debt in the UK by buying more stuff, which isn’t making us happier and is getting us further into debt.

If you look at the type of economy that we could have, which is based on repairing what we have, repairing things from scratch, making things from recycled materials, it’s an economy that is rich in employment and I think it’s a real answer to a situation where everybody agrees that to stabilise the economy you need to increase demand and this is a way of increasing demand for services, for doing things, in a way that doesn’t also and in fact could decrease consumption.

Isn’t that shift to an economy based on all the different ‘re’s that you mentioned one that would bring economies such as ours to its knees?

I don’t think it would. I think it’s one that is rich in employment actually. It’s an economy that calls for practical people and artists in equal measure, so you’d see a huge rise in employment in repair and maintenance for example, so everything from plumbers to painters and bakers.  It’s actually a richer, more diverse economy, and an economy which replaces the impoverishment of work; the impoverishment of the call centre and the relatively stripped-bare employment, types of employment that are satisfying and rich in social connections.

I think there is everything to be gained by switching from an economy that’s built on ever rising levels of consumption to one that’s based on repair, maintenance and doing things together. 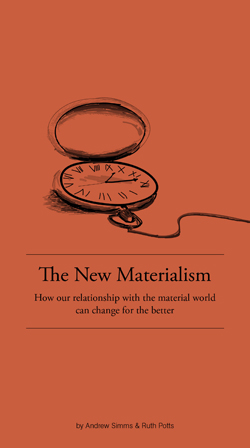 In a New Materialist world, we would have things that we repair rather than throw away. We wouldn’t have constant upgrades. If we think about it in terms of our social relationships, what we all ultimately seek is meaningful and lasting relationships and I think that can be applied to stuff.  Rather than having situations where the moment we buy something there’s a new must-have model, I think we’re looking for a world where perhaps, as they once did, our washing machines last a lifetime. I think the oldest working fridge is something like 93 years old.

It’s a culture where we build memories around the things we have in our homes. We care for them and we repair them. It’s where, in the words of Erich Fromm, buying things is ‘keeping it’ buying and where we actually have control over things that we have. I’m sure many of us have experienced the frustration where one tiny element in a toaster blows and the whole thing has to be scrapped because we can no longer access the parts that we need in order to repair it. It’s getting back to a stage where we have both a relationship with but also control over the things that we have, so we’re not just passive consumers but we’re actively engaged with our things.

I think you can already see that emerging, from the culture of repair, furniture recycling projects that are springing up all over the country to the rather fantastic Restart project whose strapline is ‘don’t despair, repair’, who are teaching people how to mend and care for and make last perhaps some of the things that have become the most high-velocity in the modern economy.  Things like our laptops and our mobile phones. There’s a huge satisfaction in making things last actually.

You recently had a Festival of Making here in Totnes. How did it go?

The Festival of Making came because this is such a period of consumption and shopping, the run-up to Christmas is all about how many shopping days there are left til Christmas. We just thought it would be fun to put a Festival of Making in the heart of the Totnes high street, so we hired Totnes Civic Hall for a day and we invited local makers and craftspeople and re-makers to come and share their skills for an afternoon. We had people learning how to spin yarn that they could then knit, learning how to bake, learning how to weave containers from recycled tetra paks, people carving bows and arrows. We had a whole range of activities going on.

One of the beautiful reflections that came from that was the woman who’d been teaching people how to spin said that she had taught people not only from Totnes but also, because Totnes has a Language School, people from around the world learnt how to spin. She’d sent them off home with their spindles and with a quantity of yarn so that they could carry on that practice and teach others.

She very much hoped that we had on that day ignited something of a passion for making in everyone who came through the hall, and it was a beautiful afternoon. It was buzzing and it was alive and people were chatting and learning from one another and really enjoying themselves.

George Monbiot wrote a great article this week about Christmas. There is of course a whole industry that makes us desire that stuff.  Nobody felt they needed an iPad before iPads were invented. How do we overcome that powerful commercial brainwashing?

I think there are very strong and powerful arguments for restrictions to advertising, because advertising is the medium which, in the words of Edward Bernays, one of the founding fathers of the modern advertising industry, is about “trying to convince somebody who is a nobody what they’re a somebody”. I think that’s a really miserable way of looking at people actually. 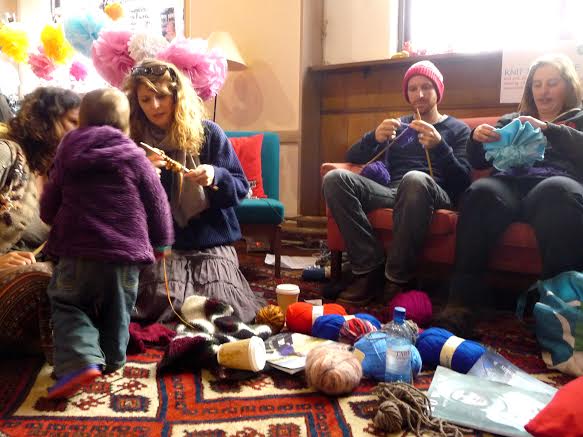 In the words of Virginia Woolf, “there are no such thing as ordinary people”. So yes, restrictions on advertising, but what we were trying to get at with The New Materialism was that the moment that we start to enter into a relationship with the things that we have by caring for them and repairing them, actually we reduce some of the lure of that advertising, because we don’t want to give up things that we love.  By learning to repair what we have, part of that is that it could make us immune to advertising and satisfied with what we have.

I think George Monbiot is exactly right to point out that Christmas is one of the points of the year where this mass consumer treadmill goes into absolute overdrive and we’re convinced not only that we have to buy something for everybody but that we have to spend hundreds of pounds that in the current climate or if ever, people don’t have. This is why we are experimenting this year by making the run up to Christmas a ‘Make Something Month’.

We’re encouraging people just to have a go at one thing, because we think that the more that we make for one another in the run up to Christmas, actually the more we’re going to spend time with people because often making involves asking advice off other people, learning from others, and there’s a chance that we might all arrive at Christmas a bit happier and a bit less in debt. The Tale of the Tooting Bus Turning Circle