I’ve been living without a fridge for the last three months – the winter months of Melbourne, Australia. Before you send me to the asylum, however, let me tell you about this experiment which produced several interesting, and I think important, surprises, related to energy consumption and lifestyle habits. My main conclusion, which I’ll unpack below, is that living without a fridge (at least in winter) is possible with minimal inconvenience.

Let me begin by noting that the fridge is the only household appliance (other than a clock) that is on 24 hrs a day, 365 days a year. It takes energy to cool things, and it takes more energy to freeze things. The typical fridge/freezer uses about 14% of household electricity (more if your fridge/freezer is large, old or inefficient). This is a very significant portion of household electricity consumption, so in an age when energy consumption is driving climatic instability, thinking about ways to reduce energy is critically important, even if at first some ideas seem a little crazy. Since energy costs money, reducing consumption also has obvious financial benefits. Those were my primary motivations for my experiment living without a fridge. I also felt that the fridge is probably the last appliance people (including me) would normally give up, so I was interested in the question of what life would be like without one. Now I know that life goes on more or less as usual.

But to make haste to my experiment. On the first day of winter my household switched the fridge off and, as I write, it is still off. You will see below that I set up a cool box out the window of the room off our kitchen, on the shady, south side of the house. I packed earth and sand around the cool box in order to store the cooler night temperatures, and the cool box helped keep out the warmer day temperatures. That’s my theory at least. I’m not claiming this is the best system for a non-electric fridge, but it worked perfectly well for me, and it was made using things I had lying around the house. (There is a different system that uses pot-in-pot that you might like to read about here and which I intend to experiment with one day.) I also put a polystyrene box over this fridge on warmer days, as extra insulation, but not sure whether that did much. 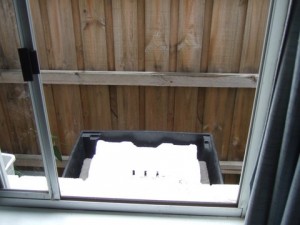 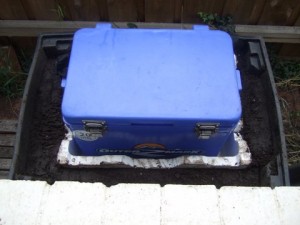 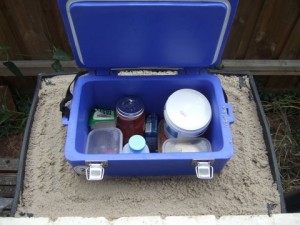 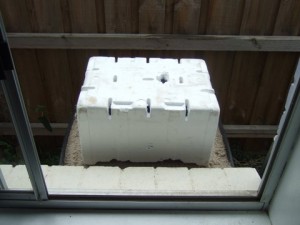 Since the cool box is small, we had to be very selective about what we kept in this new fridge. If you had a larger cool box, obviously more could be kept in it. The first lesson from this experiment was that about half of what we normally kept in the fridge doesn’t need to be in the fridge, things such as vegetables, butter, chilli sauces, jams, chutneys, curry pastes, etc. The things we did end up keeping the fridge included milk, yogurt, cheese, yeast (for bread making), and leftovers. Our grandparents knew this was possible, but in recent times the cultural tendency has been to refrigerate many things that don’t always need refrigeration.

I’m a vegetarian so storing meat wasn’t an issue for me, and on the occasions when others in my household ate meat (about once a week), it was purchased on the day and eaten that night. Living without a fridge is possible, but you still have to take these types of precautions so as not to create health risks. As for milk, I purchased one litre of milk approximately every two days, and during the experiment we never had to throw out a single drop. I did have to go to the shops to buy milk more regularly, however, because usually we’d buy and store around four litres at a time, twice a week. But this minor lifestyle change turned out to be for the good, as it gave this rather computer-bound academic another reason to go for a short walk or a bike ride each day or two. What at first I thought would be an inconvenience, turned out to have this silver lining; indeed, it was more silver lining than cloud.

Another interesting consequence of this experiment was that food waste actually went down, not up, which surprised me. We throw very little food away anyway, but that ‘very little’ (which goes to the chickens or compost) essentially went down to ‘nothing’. Poor chickens. Given that we knew we couldn’t store food for very long, we carefully planned meals for the week (more than usual) and purchased accordingly, and this method (which is sensible anyway) minimised waste almost to nothing. Sourcing most of our vegetables from the back garden made this easier, but this is not a requirement for living without a fridge, as vegetables last surprisingly well out of the fridge.

As I enter my fourth month without a fridge, I sense that the time is coming when I turn the fridge back on. As spring weather warms up (its predicted to hit 25 degrees tomorrow), my outside, non-electric fridge will stop working as effectively. When food or milk starts to waste before consumption, that will defeat the purpose of the experiment, and the fridge will be turned back on. Next winter, however, I know the fridge can be switched off again. But don’t think this is a big deal. The last few months without a fridge have honestly passed without any hardship at all – making the fridge an unnecessary energy expense during cold periods. In temperatures typical of a Melbourne winter – which is all year round in many climates – a fridge is totally unnecessary.

This leads me to a final point. When I first thought of living without a fridge, I – like you, perhaps? – thought that it would be more or less impossible; a terrible hardship; a terrible inconvenience. But now, by experience, I can state that it is not. I find this is interesting. How many other things could we do without and cope just fine – things we currently consider necessities? How much energy and money could we save? How much superfluous consumption could we avoid? If something as ‘necessary’ as a fridge turned out to be unnecessary, then it suggests the scope of savings could be vast, benefiting both people and planet. Imagine if everyone turned off the fridge for three or four of the coldest months of the year: we’d reduce our electricity consumption by around 14% for that period, perhaps more. In an age of worrying climatic instability, this is a not insignificant reduction, and it doesn’t require any fancy new technology. It is essentially a ‘free’ saving. Of course, it would take a culture-shift of extraordinary proportions for this to happen, but my point has been that people seem to think it would be a much bigger deal than it actually is.

I believe that this message generally applies across the board: people in affluent societies could live very well while radically reducing consumption and radically changing their lifestyles toward much ‘simpler’ ways. This is very good news, because all the evidence suggests that true sustainability (as opposed to greenwash) implies cultures based on simple living and a post-growth macroeconomics of sufficiency (see here). Many think that this transition would be too hard, but this fridge experiment, modest though it is, suggests that even radical changes can be easily accommodated with a little creativity and an adventurous spirit.

As my old friend Henry Thoreau once said: ‘What old people say you cannot do, you try and find that you can. Old deeds for old people, and new deeds for new.’

For my experiments with other alternative technologies, see my deindustrial washing machine, my solar oven, and my solar shower.