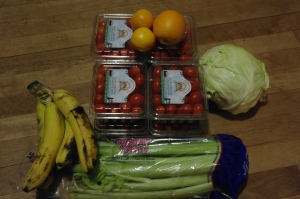 Here is all the food I pulled out of my new favorite dumpster!!

Last winter I wrote an essay entitled The Tragedy of a Disposable Culture.  It was inspired by my observations of a world gone mad by garbage and a particularly good dumpster score at a construction site.  I ended up pulling out a bunch of 8 foot 2x4s, 2x12s, ½ by, 8 foot sections of plywood and other random, but useful materials.  Some of that lumber has been used in beehive equipment and a lofted bed for my son, while the rest awaits a future project of some kind to manifest itself.

My days as a dumpster diver started in earnest back when I was 19.  As a poor college student who excelled at missing class due to environmental activism, joint rolling, and hangovers, I had plenty of time to explore the small college town I was living in.  On the north end of town there was a grocery store that kept an unlocked dumpster.  I stumbled upon it one night and felt like I had hit a jackpot.  Inside the dumpster were pre made veggie platters, bagels, and bags of apples.

Being the good vegetarian I was back then, this was a great find.  I loaded myself up with as much as I could carry and headed back to the dorm to figure out how to proceed.  I got my friend Chris to join me, and we headed back up to the dumpster with some bags, warm coffee, and a joint we shared together underneath the stars.

That night we made it our mission to liberate as many of those goodies as we could; not only to feed ourselves, but to feed as many other college kids as we could find.  We loaded up the veggie platters and apples, and also realized there was a whole garbage bag worth of bagels for the taking.  Without hesitating, everything that could be salvaged was, and we headed back.

As we entered into the main part of the campus, enough people were out walking around (it must have been a Friday or Saturday night) that we decided to just start handing out the bagels.  Some people thought we were nuts, but most (being poor college students like ourselves) were grateful for some free food to go along with their beer.  We nearly emptied the bag in less than an hour!

The next day I gorged myself on veggies and finished the apples, and with what I couldn’t eat fresh, I turned the excess produce into a big stew that contained broccoli, cauliflower, and carrots – nothing had ever tasted so good as that dumpster stew!  For the remainder of that year in Wisconsin I would often visit the dumpster.  Some days were better than others, but I usually came away with at least a snack to tide me over in those lean days of my failed attempt at higher education.

And so that is how I got my start diving into dumpsters.  Since those days back in Wisconsin, I have a hard time passing a dumpster without peeking my head in to see what might be hiding down in the deep, dark, and sometimes stinky depths.  Most times it is just truly garbage, but on those rare occasions something great is procured – romex wiring and brand new electrical plug-in boxes, boxes of nails, a whole universe of dimensional lumber, box fans, books, extension cords, a multi-tool, cleaning supplies,  and five gallon buckets have all been found in my local dumpsters and back alleys.  But it hasn’t been since the glorious food dumpster in college that I have had luck in finding high quality food for the taking, that is until yesterday!

Yesterday I was doing a bit of grocery shopping at a store that is fairly new to us and our area.  While it is not a store I typically shop at, I was intrigued by a flyer we had received with the Sunday paper and thought I would check it out.  Surprisingly, the prices are pretty affordable, and if you are an ingredients list reader like I am, most of the products I was interested in purchasing contained a short ingredients list that I could read and pronounce all of the words contained in the list with no problems!

I got the small amount of items I had set out for, but was amazed by a few things I noticed while walking the aisles.  Almost all of the fresh produce is over packaged – snow peas laid out on a foam tray wrapped up in plastic, individually wrapped cukes, two tomatoes to a tray – you get the picture.  Upon seeing this, my mind flashed backed to the dumpster of glory I talked about earlier – that dumpster contained the same kinds of things, over packaged produce that was still good for eating, and lots of it.

I paid for my items, and decided right then and there to see if my suspicions were correct.  I pulled my small car around to the back of the strip mall, found the proper dumpster, and casually went and stuck my head in.  WOW!!  Not only were my suspicions correct, they were exceeded by what I saw in there!  Snow peas, bunches of celery, cabbage, citrus, and a tray of multi-colored bell peppers that were just out of reach.

Being that it was the middle of the day and well past 90 degrees, I quickly grabbed what was within arms reach and got out of there.  Checking for cameras as I left (which I couldn’t find), I felt secure about going back later in the night to check back in on the dumpster.  On that first trip I left with a perfectly good head of cabbage, a few trays of the aforementioned snow peas, and celery.  Because of the heat I ended up feeding the peas and the celery to the chickens, but still a good use of otherwise unwanted food – spoiled veggies turned into egg protein!

As day turned into night and I finished my evening chores, I suited up in working clothes, put on my boots, grabbed a flashlight and a couple of buckets and headed back to the dumpster.  This trip was even better!  I ended up leaving with 8 pints of grape tomatoes, a bunch of organic bananas, 3 oranges, and more celery.  I was stoked!

With the tomatoes we are going to make a salad with mozzarella balls, and basil from the garden, and salsa using cilantro and purple jalapenos from the garden as well.  The bananas, just slightly soft to eat fresh are going to be turned into banana bread with some sunflower seeds in it, the cabbage is most likely going to get fermented into a small batch of kraut, the oranges are perfect for eating by themselves as is, and once again the celery went to the chickens.  What a great abundance of food that otherwise would have been tossed into the landfill.

It breaks my heart knowing that this dumpster is filled with food almost everyday.  What is even worse, is that there are millions of other dumpsters just like it around the world.  Lucky are the ones that are not kept under lock and key and compaction, but most are.  So really, the crisis of kids going to bed hungry, and people not knowing where they are going to get their next meal is not a matter of there not being enough food, but a problem of distribution.  If a company can’t make money off of the product, it is easier to just toss it, rather than offering it to food shelves and kitchens or directly to the people.  This is insanity, and it is wrong! 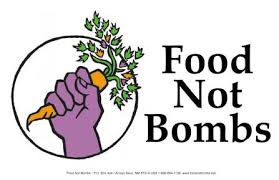 While this topic is too big for me to tackle in one small essay, there are solutions to this problem of distribution.  The group Food Not Bombs who I used to work with back in my punk rock days is one of these solutions.  Founded in Massachusetts in the early ‘80s by anti nuclear activists, Food Not Bombs has grown into a worldwide movement of independent collectives that serve free vegan and vegetarian meals at rallies, protests, and impromptu gathering.  Lots of the food that FNBs uses is dumpstered and donated, and then cooked up and offered for free to anyone who is hungry.

Food Not Bombs, along with many other groups that have similar intentions, are fixing that distribution issue.  Just like in Permaculture where we can take the problem and turn it into the solution, FNBs is liberating perfectly edible food from dumpsters and feeding those who are in need of a good, wholesome meal.  Not only is this act one of compassion towards our greater community, it is also a shot across the bow of the corporate, food elites.  It is taking the food back to where it belongs, in people’s stomachs regardless of who they are or how much money they have to their name.

It is hard to imagine what the possibilities might be if all the food that can be found in dumpsters – fruits and veggies, packages of cheese, and crates of olive oil (just to name a few) were to make it into the hands of the people who need it the most.  What would happen if everyone went to bed with a satisfied belly?  What would happen if we no longer equated the ability to eat with how much money you earn?  What amount of resources could be saved if we ate all this food (or at least fed it to livestock or even composted) instead?  These are questions we can ponder all we want, but in reality it comes down to one thing – If you have access to a dumpster(s) like this, take full advantage of it.

Take what you can and eat it yourself.  Experiment with recipes using what you have on hand.  In the case of the cabbage, practice preservation techniques like fermentation.  Or if you find a bag of lemons, preserve them in salt or make lemonade.  The possibilities are endless.  If you find more than you can use or preserve, share it with friends or family.  If you have a local chapter of Food Not Bombs, or some equivalent organization, donate the food to them and even better, volunteer and get involved (This is something I need to start doing again as well).  And if you have produce that is not fit for human consumption, feed it to your chickens or other livestock.  Novella Carpenter, in her book, Farm City describes how she fed her two urban hogs a diet of dumpstered fish parts, peaches, and other produce that Bay Area residents discarded on a daily basis.  Whatever you decide to do with your dumpstered food, the important thing is removing it from the waste stream and keeping it out of the landfill.

As for me, I plan on visiting this new dumpster a few times a week.  While my family is not starving from a lack of food, I plan on taking full advantage of this resource and using it in conjunction with our garden produce and eggs from our chickens.  I have no qualms about eating produce or other grocery items out of a dumpster, and if I can cut down on my monthly food costs, and fill up my larder at the same time, even better.  And if I come across someone in need in my community, I am going to share this little secret of mine with them so they can reap the benefits of this magical dumpster as well!  Peace & Cheers