Sandor Katz lives a couple hours across Tennessee from us, so on a delightful April weekend we decided to spend four days attending his Wild Fermentation Intensive. Sandor is quite the celebrity these days — after profiles in The New York Times Magazine, The New Yorker, and Michael Pollan’s new book, Cooked, Sandor’s own encyclopedia, The Art of Fermentation, still in hardcover, has galloped through several printings for Chelsea Green. Readers of Resilience will find scores of references to Sandor over the past few years, as sustainability bloggers have come to recognize the importance of fermentation to sustainability.

Sandor remains humble and accessible, despite being whisked around the world to rub elbows with celebrity chefs and food editors, take part in red carpet gastronomic events in Japan, France and California, or opine in various fora like Bioneers, the Mother Earth News Fair and TED. Today he is in Brooklyn and then Los Angeles, then the Ballymaloe Literary Festival of Food and Wine in County Cork, Ireland, then back to Tennessee, then on to Vermont, Oregon, Florida, Wisconsin, and Seattle in June.

For several years he has been doing very intimate, down home workshops and for this purpose has outfitted a rustic kitchen stadium in the basement of a house across the road from Short Mountain Distillery (makers of quality Tennessee Moonshine since 2012). This kitchen has everything needed for a dozen people to rub elbows while chopping vegetables, stuffing pickle jars, or heating raw milk to 180°F. Sandor keeps the workshops small enough to allow hands-on experiential learning, and cheap enough for anyone to attend, providing camping and self-cooked meals from his refrigerators and freezers stocked with the produce of his farming neighbors.

Arriving on Thursday, we were immediately plunged into two cultures that Sandor wants to get into the incubator right away — tempeh and koji. As Sandor describes his personal journey into fermentation — having too much cabbage and not wanting to let it go to waste — he is boiling a pot of cracked, organic soybeans and millet (the splitting was done by the hand-crank mill at the end of the counter, and the beans came from the same source as The

Farm’s organic tofu and soy milk) until the hulls separate and can be skimmed off. After half an hour of participant introductions, the beans and millet come off the stove and are drained. As he pours the hot mix into two large mixing bowls to cool, Sandor is telling us about the Cultured Pickle Shop in Berkeley where he learned about a second ferment of kombucha juice with turnips.

The narrative — a practiced patter of pickling wisdom and microbial factoids — does not let up as he gently turns the beans with his fingers to cool. When the bean-millet mix is ready to inoculate — he inserts a meat thermometer to see if it is under 100° — he pours the starter from a small mixing bowl where the packaged powder (Rhizopus oligosporus) has been reviving in lukewarm water, as would a bread yeast, into the large mixing bowl and resumes fondling.

Now he demonstrates for us the method, first developed by the late Keith Steinkraus at Cornell University, of taking a zip-lock pint sandwich bag, laying it over a grilling screen, and perforating it with a grid of holes at one-inch intervals. We all take turns making perforations, filling each bag with about a pound of inoculated beans, flattening the contents and setting them into the incubator. The incubator is not a laboratory instrument, but befitting this Tennessee basement across from a moonshine still, is an old broken refrigerator with a lightbulb on a thermostat to keep it at 85-95°F.

When he is traveling, he sometimes takes a standard Dollar General plastic tub, a metal oven pan and a tubular aquarium heater. Filling the metal pan with an inch or two of water, he submerses the heater, set to 85-95°F, lays pan of water with heater in the tub, puts a rack on top, and is ready to incubate cultures.

Tempeh started, Sandor moves on to his pot of boiling barley, which will provide the substrate for koji. He tells us that the latest craze sweeping Tokyo is koji and salt, which is not that great tasting and not traditional, but people are snacking on it as if it were cheese doodles. When the barley is cool, he spreads it into cheesecloth-lined wooden trays and inoculates it with miso starter (Aspergillus orizae), in much the same fashion as the tempeh. Into the incubator it goes.

Now its time to make supper and Sandor has mixed chick peas, lentils and rice into a reddish paste that has been sitting quietly at room temperature to form sambar, something akin to chili. He steams up a pot of rice and breaks out some fermented daikon radish pickles and mixed vegetable krauts.

Day Two begins, after eggs and sourdough pancakes, with sour tonic beverages. Mabí, also known as mauby, comes from a bark of a tree (Colubrina elliptica) found in the Caribbean, which naturally Sandor has a 5-pound sack of (from an importer in Connecticut). He says the name is a contraction of the creole “ma biere” (my beer). He has original mauby starter culture was smuggled home from St. Croix but he says kefir can also work as a starter. The process starts with brewing the bark into tea, then aerating back and forth between cups, and bottling it with some sugar. He suggests bottling it in plastic so you can tell if it is getting pressurized and relieve the pressure before it explodes. By Sunday the bottled mauby is a sweet fizzy soda.

We went on to start water kefir (with a slice of papaya for sugar), drain whey from curds of clabbered raw milk, and start a ginger bug. Sandor’s friend Caleb dropped in to show us how to make a carbonated kombucha tea, and we proceeded to make a variety of sour tonics and bottle them up for later sampling. Caleb likes grape juice, lemon juice, lime juice and various fruit teas. Kombucha is a SCOBY (Symbiotic Community of Bacteria and Yeast) that comes from Tibet, but is sensitive to flavors (although it seems to do well in apple juice) so a second fermentation of the liquid is needed to produce a flavored beverage.

The ginger bug is just a thumb of grated ginger, 3 Tbsp sugar (can be cane syrup, maple syrup, agave, etc.), and water in a mason jar with a cloth cover. In 2 days it’s ready for second fermentation. We age it in plastic bottles with turmeric and grapefruit juice.

After a tour of the distillery and samplings of Short Mountain Shine and Apple Pie, we are back to make some idly, using fermented black lentils (de-husked) and rice. The fermentation process breaks down the starches to be more readily metabolized. The batter is poured into idly dishes that are stacked into trees and suspended into a pot of boiling water to steam or be baked in the oven. Dosa is a fried preparation of the same batter. Our lunch is idly dressed with sambar, and more pickles and chutney.

Afternoon finds us working with vegetables making kraut and kim chi. We each bottle up a mason jar of carrot and cabbage kraut to take home. The tempeh is already turning white.

Saturday morning the koji has powdery sporulation. The tempeh from Thursday found its way to supper last night and will be in lunch again today. The mauby needs a stir, then is ready to bottle. The kefir water gets raisins to help it grow. Soybeans have been boiled the previous evening, cooled and injected with natto starter. After a cool night they will go into the incubator for the rest of the day.

The kim chi is undisturbed in a large, covered pot but later today we will can it. We are heating raw milk for yogurt, doul and kefir. The buttermilk sat out for 24 hours and is clabbering. We all take a taste. Yum. The viscosity in the kefir is called “kefiring” and is not a cause for concern. Sandor is oft heard to note from a USDA source that in two centuries of records, there has never been a reported case of food poisoning from fermented foods. 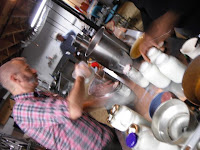 Sandor refers us to the late Lynn Margulis’s essay “Sex, Death and Kefir”  as he puts the milk on the stove and stirs. He is denaturing it at 180° so that the bacteria of the yogurt can reweave the strings of protein. He has two strains of yogurt starter, one the Lactobacillus Bulgaricus that forms the basis for all Western yogurt cultures, and the other a rarer Lebanese strain. We mark our mason jars “B” and “L.”

Sandor tells us about skyr, an Icelandic yogurt that has nothing to do with yogurt, greek yogurt, and vily, a rare milk culture that forms a colloidal solid. We make 10 quarts of yogurt, 5 each of “B” and “L.” Sandor then starts a sorghum porridge that will get a 48-hour fermentation into a tasty cake. Our Saturday supper includes the last of the tempeh, bacon-fried in coconut oil with Italian spices, and a Japanese natto dish: egg yolk, uncooked stringy natto, white rice and Dijon mustard, strong on the horseradish. We contribute a six-pack of Oatmeal Stout homebrewed by Jon Hatcher at the Ecovillage Training Center, and Sandor uncorks some bubbly mead.

After three days, Sunday is a bit of a blur and we’ve stopped taking notes but we seem to recall something about alcoholic beverages and putting up crocks of miso. Persons braver than might be expected dive into a deep, ancient kraut barrel in Sandor’s root cellar and rebottle years-old ferments until his jar library is emptied. We tour Sandor’s home on Short Mountain, an 1820s log cabin being remodeled, and the adjacent ecovillage. We gather wild ramps, nettles, poke salat, and reishi. We ate, we hugged, we exchanged addresses and we parted.

We will next see Sandor July 27, when he comes to The Farm for our workshop on Fermaculture,  mixing the basics of food preservation with an introduction to permaculture design.

Of warnings and their ripple effects