It has the greatest title of any peak oil publication I’ve yet come across – but does Peak of the Devil live up to the promise?

The 232-page book will be published by Satya House Publications in October 2010, retailing at $14.95. Chip Haynes, longtime online peak oil writer, has taken the unusual step of creating a beginner’s guide, broken down into 101 chapters of between 400 and 500 words. With at least one cheesy gag in each chapter.

But then, as the book states: “Never lose your sense of humour.”

From the outset, I have to say that “artist, writer, juggler and cyclist” Haynes has produced a decidedly eccentric publication, even in a field so acquainted with the aluminum foil hat brigade. But I must make it clear that there are no wacky ideas in Peak of the Devil. It’s exceptionally well thought-out and balanced: while observing that the world is “over-populated” for an immediate future of less available oil – and consequently less food – it reassures us that life and indeed culture will go on. “Every symphony Beethoven ever wrote can be played without using a drop of oil. . . people really did have lives, full happy lives, before oil.” Evaluating cornucopian claims of energy alternatives and the doomer Mad Max outlook, Haynes suggests “. . .read all you can and don’t forget, the truth is probably somewhere in the middle.”

Haynes succinctly states a couple of peak oil points that I’ve been struggling to articulate for a long time: the best place to be when oil supplies get tight is where you are living right now, and to look to the past for clues of what to expect in the future. Peak oil “will not be, as some have predicted, a return to the Dark Ages,” he writes, suggesting we should work with our neighbours rather than think about moving to the countryside or even attempting to live, survivalist-style, in the woods – albeit with hints about those out in the ‘burbs being advised to move closer to town. So it’s a case of make friends and prepare for a life of low energy and hard physical work. Haynes observes that probably the safest assumptions we can make about a future of diminishing oil availability come from looking back to the past. As he calls it: “. . . the end of the 21st century is going to look a lot like the end of the 19th, but with better healthcare and stronger child labor laws, if we are lucky.”

It’s not the content but the telling that’s eccentric. The gags, short chapters and repetition of phrases like “no, really they did” to make a point can be most politely described as a love-it-or-hate it approach. At times it is laugh-out-loud hilarious. Sometimes it’s like being cornered by a drunk.

To quote from a representative paragraph:

The very best we can hope for is a smooth and orderly transition from the modern oil powered world we have now to a stable world of little or no oil in the next hundred years or so. Human nature being what it is, I don’t look for that smooth and orderly part to happen so much. It would be comforting to think that we can change our lives without disruption and conflict; that we can all work together toward this one common goal and put aside our differences and minimize the trauma and drama. It would also be nice if there were no calories in chocolate and we could eat all we wanted without gaining weight. Again, don’t look for that to happen either. Peak oil, and the aftermath of that peak, is going to cause traumatic shocks that will unsettle virtually every aspect of our lives, no matter where you live.

You either think the chocolate reference brings the topic down to earth or else should have been fixed at the editing stage. Haynes is a great writer, but humour is probably the toughest gig in town. Humourists like PJ O’Rouke adopt more of a detached air; it’s impossible to be both earnest and funny. 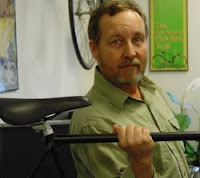 This is all stylistic oversensitivity on my behalf. My main criticism is the book’s opening. Haynes (right) does not adequately describe peak oil. He refers to it as “the point where the world’s oil supply, well, peaks.” While he does subsequently talk about M King Hubbert, he holds off on  more extensive definition of peak oil for the conclusion. I’d suggest the book should have opened with the conclusion, and built from there. And while we’re at it, the first few chapters would benefit from a few more facts and figures to back up the author’s claims and give the reader a sense of the urgency of the peak oil problem.

His publicist bills the book as “Chip Haynes answers 100 of the most significant questions about peak oil with an educated and quirky sense of humour. . .” And yes, he does. Peak of the Devil should be in every public library and recreation centre. It’s a great introduction to the topic. For all its flaws there is much genius within the pages, a great deal of perceptive and subtle thinking. It’s just that being the contrarian that I am, I’d say that it works more as an argument against the doomer mindset than as a peak oil primer – read it with that in mind and you will be impressed. Above all it’s refreshing not to have to read suggestions of moving to a small market town to avoid the worst of the post-peak meltdown.

Peak of the Devil has both a blog and a static website, and both are worth a visit.

I’ll give Haynes the last words: “Peak oil changes everything, and few things will change for the better. We’re looking at a long, painful transition period as we are all forced to adapt to new lives of much less oil, energy, food and resources.”