A draft study prepared for the German military was leaked at the same time Australia’s “most influential progressive think tank” published its own findings. Needless to say, when words like leaked, military and peak oil are put into a headlines, you can guarantee a degree of interest – meanwhile, the Australian report came out shortly after the nation’s August 21 federal election, too late to shape the debate.

Both were published on September 1, but it’s only the German report that seems to have received global attention (it actually came out in German-language media the on August 31, but translation apparently took a day). It would be a pity if the Australian version is overlooked, as it provides a remarkably balanced overview of the whole peak oil debate.

The German report comes from the Future Analysis department of the Bundeswehr Transformation Center, a “think tank tasked with fixing a direction for the German military,” according to the account in Der Speigel. This continues:

The team of authors, led by Lieutenant Colonel Thomas Will, uses sometimes-dramatic language to depict the consequences of an irreversible depletion of raw materials. It warns of shifts in the global balance of power, of the formation of new relationships based on interdependency, of a decline in importance of the western industrial nations, of the “total collapse of the markets” and of serious political and economic crises.

The study. . . was not meant for publication. The document is said to be in draft stage and to consist solely of scientific opinion, which has not yet been edited by the Defense Ministry and other government bodies.

Of course, it’s interesting to note that it hasn’t been edited by the government, which leads to a great deal of speculation and possible comparison with a recent report published by the US military. The Joint Operating Environment 2010, created by the United States Joint Forces Command in February sidestepped the peak oil issue to suggest a supply shortfall possibly as early as 2012 due to underinvestment in the oil industry. That, of course, had been edited by the government!

In the past, resources have always triggered conflicts, mostly of regional nature. For the future, the authors expect this to become a global problem, as scarcity (mainly of crude oil) will affect everybody.

The authors confirm multiple views on Peak Oil timing and concede that there will be Peak Oil eventually. The study isn’t about positioning the problem on a timeline, but instead about the consequences of a peak. They expect major consequences with a delay of 15-30 years after the peak has hit.

It considers the instability of the Middle Eastern oil producing nations, shifting geopolitical strategies, and likely coming reduction in free market mechanisms with a coming “rise in more protectionism, exchange deals, and political alliances between suppliers and customers.” We will subsequently be seeing a very different international picture, with a likely “reduction of the importance of ‘Western values’ related to democracy, and human rights in the context of politically motivated alliances, which increasingly are driven by emerging economies such as China.” Meanwhile, there will be a global crisis in transportation, both personal mobility and shipping goods. This means “food particularly might become a critical issue for countries that are a) highly dependent on imports and b) are susceptible to price-increases of food products, particularly affecting Africa, parts of Asia and Latin America, and the Middle East.” Reduced standards of living will make many countries less stable. It all adds up to “systematic risks”:

In addition to the gradual risks, there might be risks of non-linear events, where a reduction of economic output based on Peak Oil might affect market-driven economies in a way that they stop functioning altogether, leaving the possibility of a relatively steady downward trajectory.

Such a scenario could develop through an initially slow decline of trade and economic activity, combined with higher stress on government budgets from lower tax income, higher social cost and growing investment into alternative technologies.

Investment will decline and debt service will be challenged, leading to a crash in financial markets, accompanied by a loss of trust in currencies and a break-up of value and supply chains – because trade is no longer possible. This would in turn lead to the collapse of economies, mass unemployment, government defaults and infrastructure breakdowns, ultimately followed by famines and total system collapse. 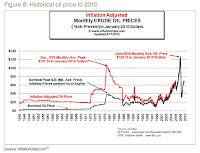 Meanwhile, the “policy brief” published at the same time day by the Canberra-based Australia Institute strikes a less geopolitical, but not contradictory, tone. Running on empty? The peak oil debate provides a valuable overview of diminishing oil reserves, presenting a fair, balanced and accurate précis. Its great strength is its balance between “what the optimists say” and the views of “peak oil doomsayers,” representing all viewpoints. (See chart, right, of historical oil prices.)
The report begins by defining peak oil, “the point in time at which the worldwide production of crude oil extraction will be maximized” and stating that the whole debate is really over when this will happen and what, if anything, should be done ahead of time. It states:

Moreover, as the IEA has argued, the world is currently embarked on a fossil-fuel future that is patently unsustainable from an environmental perspective, quite apart from the fact that rates of extraction will exhaust fossil-fuel resources far too quickly, thus ignoring the needs of future generations.

World economies are built on oil. The question is what will happen when it runs out, or merely becomes difficult and very expensive to procure. The probable answer is not an acceptable one.

As occurred in response to the OPEC oil shock of the 1970s, skyrocketing oil prices are likely to result in severe disruption to economies, with central banks raising interest rates to slow runaway inflation, people out of work, famine, hunger and serious civil unrest. It is a scenario that governments and their constituents should be attempting to avoid at all costs but so far very little has been done to prepare for or contend with the eventuality.

The report’s background on oil discovery and projected future extraction is essential reading for anyone following the debate. As ever, you get a concise overview of the facts, followed by a fair account of varying interpretations of where it’s all going:

World oilfield discoveries peaked in the 1960s at around 55 [gigabarrels] Gb a year, but since then the rate of discovery has fallen and between 2002 and 2007, fewer than 10 Gb a year have been discovered. To put that in perspective, current demand is 31 Gb a year. Oil is being used at a faster rate than new supplies are being found, although improvements in the conversion of resources into reserves, due to a better understanding of resources and the use of better extraction technologies, is helping to offset this. Production first surpassed new discoveries around 1985.

This leads to considerations of economists “sanguine view that when the price is high enough, investment in both exploration and extraction will become more profitable, allowing more oil to be found and extracted.” Thus we keep hearing that the world essentially has limitless oil, an opinion “based on experience gained with conventional metal resources like copper or gold, where progressively lower grades of the resource become economically exploitable as prices rise.” But we should not assume this applies to oil, as it continues:

However, recent circumstances have determined that even an enormous increase in the oil-drilling effort may not lead to increased production in a mature oil-producing region like the US. In addition, the average recovery factor (the amount recovered as a percentage of the resource), currently around 35 to 40 per cent, has proved very difficult to increase, although in some fields, recovery factors can be as high as 70 per cent. A further fundamental limitation on the capacity to increase supply by relying on lower-quality sources is the deterioration in the energy balance—that is, the extraction of these lower-quality stocks ultimately uses more energy than the end product can deliver.

The gap between discovery and production is illustrated, left.
This report gives a brief overview of unconventional sources of oil such as oil sands and shale oil (“Oil from these sources is more difficult and more expensive to extract than conventional oil and is often highly viscous with a thick, glutinous consistency that does not flow readily. Shale oils are a precursor to oil and need further treatment.”) and deepwater. Personally, I’d like to have seen more here, considering how central unconventional sources are to any argument that puts back the onset of peak oil. Too many times I’ve seen statements suggesting that Canada has oil reserves second only to Saudi Arabia, which fail to consider the flow rates and considerable investment required. This is an area that deserves further consideration.

It also gives a few paragraphs to the growing concern that “major exporting countries are reserving oil for domestic use.” While it gives useful information about government subsidies around the world leading to such concerns (“In 2007, energy-related consumption subsidies in 20 non-OECD countries, which account for over 80 per cent of non-OECD energy demand, amounted to $310 billion”) it fails to mention demographic issues such as the population explosions in many oil producing countries – a rare oversight in such an otherwise well considered report. For instance, there are many that see the Saudi Arabian nation as economically weak and beset with serious domestic political problems.

While I’m being critical, its section looking at a likely date for the onset of peak oil also deserves more space. It cites the view of “peak-oil advocates” that that the world’s super-giant oilfields are mostly “in decline with an average depletion factor of half; that is, half the extractable resource is already used up,” and then goes on to list a number of contradictory official suggested dates for peak oil. But the section would really benefit from a few paragraphs summarizing the whole area. Having said that, there is no editorializing in this report – it’s about presenting the arguments in a fair and balanced way, and leaving the reader free to reach their own conclusions. The danger of this is that the urgency of the issue can become overlooked and the debate muddied quite cynically with organizations that have a political agenda. (The asbestos industry came up with this, big tobacco perfected it, and now the tame scientists are working for the climate change deniers.)

Having said that, Running on empty? is an impressive publication that has much to recommend it. I am being inconsistent in praising it for being so concise, while criticizing it for not giving more coverage to some areas – after all, it’s not as if it misses out any major aspect of the debate. Its great strength is the listing of the various opinions on future oil production – from cornucopians to doomsayers – complete with counterarguments. It’s very useful for someone looking for an overview that offers a précis without being a tabloid oversimplification. As such, Running on empty? is an excellent introduction to the field that is also useful to more knowledgeable people looking for a concise précis of the various issues.