Profits versus the planet

On 25 March 2014, the top executives of the Brazilian meat giant JBS were in New York for the company’s annual “JBS Day,” where they announced the year’s financial results. The world’s largest producer of meat had a triumphant message for Wall Street: global meat consumption is going up and JBS is going to profit immensely from this growth.1 The Brazil—based company told shareholders that a pillar of its strategy is a projected 30 percent increase in per capita global meat consumption to 48 kg by 2030, up from 37 kg per person in 1999.2

JBS neglected to tell its investors about a critical problem with its growth strategy: climate change. If global meat production were to expand to 48 kg per capita, it would become impossible to keep global temperatures from rising to dangerous levels.3To put the JBS numbers in perspective, a new Greenpeace report finds that average per capita meat consumption must fall to 22 kg by 2030, and then to 16 kg by 2050, to avoid dangerous climate change.4 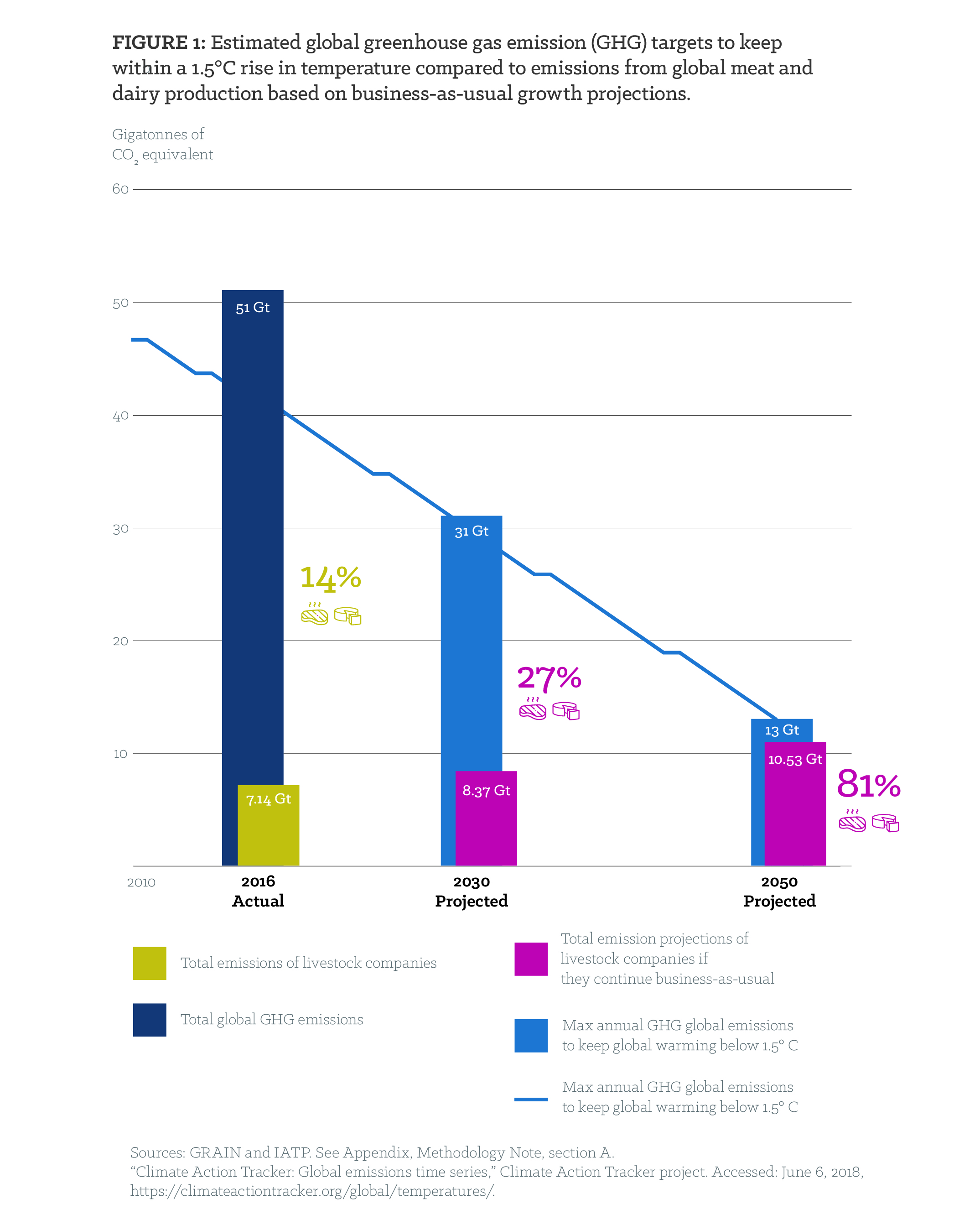 JBS made no mention of climate change in its presentation but, as with the other global meat and dairy conglomerates, it should know the climate impacts of increasing production. More than a decade ago, the Food and Agriculture Organization of the United Nations (FAO) published the first global accounting of greenhouse emissions from meat and dairy, demonstrating global livestock’s role in exacerbating climate change.5 Subsequent studies have backed up this initial assessment.6 Despite these findings, the biggest meat and dairy companies remain committed to growth levels that are completely at odds with the agreement reached in Paris in 2015 by the world’s governments to keep the global temperature rise to “well below 2 degrees Celsius (°C),” with the goal of limiting it to 1.5 °C.7

If we are to reach the 1.5 °C goal, total global emissions must rapidly decline from 51 gigatons to 13 gigatons8 by 2050 (Figure 1). If energy, transport and other sectors successfully cut emissions in line with the Paris objectives while meat and dairy companies continue to increase production, the livestock sector will account for a larger and larger portion of the world’s available GHG emissions budget of 13 gigatons. Under a business—as—usual scenario, the livestock sector could eat up over 80 percent of the budget, making it virtually impossible to keep temperatures from rising to dangerous levels past 1.5 °C.9

In direct contradiction to JBS’s outlook for strong growth, the imperatives of climate change necessitate a significant scaling back of production from the world’s largest meat and dairy companies without delay.

This report focuses on the biggest players in the meat and dairy industry. The stakes could hardly be higher: without dramatic cuts in their GHG emissions, the world may well fail in its attempts to avert catastrophic climate change. Not only do these companies have a massive climate footprint—comparable to major fossil fuel companies—but they dominate meat and dairy production in those parts of the world where there is both surplus production and high levels of meat and dairy overconsumption.10 These are the parts of the world where steep reductions in emissions from meat and dairy production are most necessary. This includes exports that fuel overconsumption amongst the more affluent middle and upper classes of developing countries.

Translations of the report

A note about our methodology Big Meat and Dairy are Heating up our Planet