AS ENERGY costs spiral out of control, an extra pair of woolly socks or drawing the curtains just doesn’t seem an adequate response.

Newspapers and social media are awash with top tips for cost cutting, but there’s another way of looking at it. What if, instead of putting the pressure on each person, we explored what communities can do together to get through this and be stronger in future crises?

After all, the cost of living crisis has complex and systemic causes – it should not be left to individuals to solve it for themselves. Governments need to act, and many are calling for measures from policy-makers to ensure no one goes cold and hungry in one of the wealthiest countries on earth, and to address the root causes of the crises we face, so we are more resilient to future shocks. Warmer this Winter, End Fuel Poverty Coalition, Energy for All and Enough is Enough are among those which have recently sprung up.

Meanwhile, we don’t have to sit passively by and wait for solutions to come from above. We can go beyond personal action to come together in our community to make the Transitions needed.  And we can learn from other places already finding new, practical ways to respond and make a concrete difference to people’s lives.

A community which can produce its own energy literally has power in its own hands! More than 270 communities across the UK are generating power. Transition Towns have spearheaded several, like Brixton Energy, OVESCO, Bristol Energy Co-op, Bath and West Community Energy, HKD Energy, West Solent and Malvern Energy Co-op.

Devon Energy is inviting locals to identify sites for mini power generation – instead of big solar farms, they are looking to create ‘power allotments’, believing the best renewable energy projects are identified by the community.

Profits from community power generation are often pumped back into projects reducing energy use, bills and carbon emissions locally. Bristol Energy Co-op, for example, has distributed £350,000 since it started, including helping local schools and community groups cut bills with new lighting, solar panels and education. Many rural communities already pay over the odds for their heat as they’re off the gas network. In the Sussex village of Barcombe community energy company, OVESCO is exploring with partners what it would take to get the whole village off fossil fuels, slashing bills in the process.

If, like Transition Belper and Transition Town Romsey, your community is interested in setting up its own energy company, Community Energy England has a How to guide here. It’s a big task and not every community group wants to take it on. Many community energy projects rely on local members or investors to raise the capital needed, so joining or buying shares is another way to support. Working in partnership is another option: Transition Stroud for example has teamed up with Big Solar Coop to bring community-owned energy generation to buildings in the town.

One street in East London is really thinking outside of the fuse box and aims to turn its 19th Century terraced houses into a solar power station owned by residents. Frustrated at lack of action on climate and old draughty homes, Dan Edelstyn and Hilary Powell brought the idea to each house on the street, created their own currency to fund solar panels and are making a documentary. While their power station will plug into one street, they hope it will ignite a debate about how the financial and ecological crises are interlinked and how communities can take back the power to solve the challenges they are facing themselves.

Creating local, green power sources should ensure turning on the lights isn’t reliant on volatile world events or damaging fossil fuels (like this solar-powered Florida town which escaped power cuts during Hurricane Ian). It should make communities more energy secure and resilient. But it’s not quite that simple.

Despite increasing public support and urgency to diversify energy supplies, 65MW of community energy production is stuck in the pipeline as getting these projects off the ground is becoming harder not easier, according to Community Energy England.

The electricity market is complex – and often local people can’t directly buy the power generated right by their homes. There is a way around it.  Brixton Energy installed solar panels on tower block roofs on the Loughborough and Roupell Park estates. Today, residents of Roupell Park can buy the solar power when it’s being generated at 6p per unit – less than one fifth of the current 34p price cap – if they join the Local Energy Club. In rural Wales, the village of Bethesda pioneered community energy clubs, buying direct from their local hydro plant. 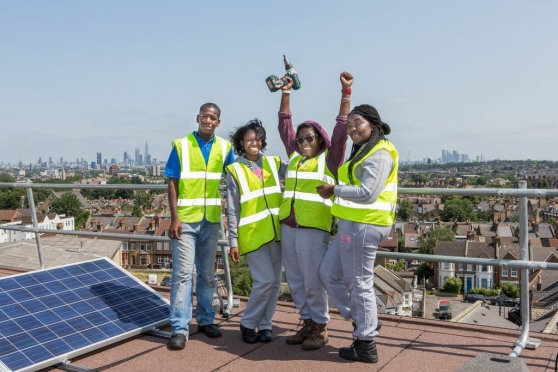 Residents can now by power from solar panels installed on the roof of their Roupell Park flats at a fraction of the current price cap, thanks to a local Energy Buying club.

It’s a workaround, but if it was easier and cheaper for people to buy local green energy it could accelerate the transition to renewables. The Power for People campaign is calling for a Local Electricity Bill to make it easier for people to buy power generated locally.  They say the costs are too high for small scale producers, skewing the market towards big utilities companies, and drastically slowing down progress towards net zero.

And this technical stuff matters – it has an impact on real people. Agamemnon Otero is founder and CEO of Energy Garden, which helps communities install gardens and solar panels on London train stations. He argues if solar had been installed at 2011 rates, by now the UK would be carbon neutral and an energy exporter. That would have made the current energy crisis look quite different for ordinary people.

“But interests laid in our way,” he said. “That’s why the co-operative movement is really seen as a deterrent to the incumbent political system, because people having power over their own energy supply really enables them to have a conscious direction around their energy, their finance, their sustainability and the environment.”

Insulating homes will cut energy use and bills not just this year, but for the long term. Reports like this and this say it’s the urgent priority and will also bring health and well-being benefits. But it’s costly for individuals and government support is limited. In Oxford, the Barton Retrofit Coop is being set up to offer new skills and jobs for local people, focusing on effective fabric-first insulation for the 1950s prefab council houses which make up most homes in the area. “Our aim is to start small and build one community retrofit team, then expand and create new teams, and then replicate the model in other communities,” said project lead Jabu Nala-Hartley from CAG Oxfordshire (another Transition group).

This approach will bring major energy-saving home improvements into the reach of many more people and spread the skills needed to accelerate community-led insulation. Often neighbours live in similar houses, with the almost identical layout, materials and retrofitting challenges. It would be faster, cheaper, easier and more accessible to find solutions together rather than each household doing their own legwork and research.

Brighton and Hove Energy Services Co-op are focusing on what’s possible when you try and retrofit a whole street. They’ll offer free advice and support to everyone in the street at once. Then they’ll connect residents with funders and contractors, and find savings for upgrades when they can be carried out at the same time rather than one home at a time.

Local projects know the local housing stock and what’s needed to make improvements. Loco Homes co-operative just marked its first birthday – it’s helping tradespeople and households  to upskill in retrofitting the tenement flats in Glasgow city. Similarly, in Manchester, People Powered Retrofit aims to skill up 3,000 tradespeople and retrofit 1,150 homes in the city in the next five years.

Households Declare is pressing for more action to tackle the fifth of emissions which come from homes, while also connecting and sharing knowledge between people to reduce that.

“When you look at the challenge of retrofit, it is not something that can be solved only by architects… it’s not going to be enough. The idea of retrofit sits at the heart of a number of knotty challenges – and if we get this right, it’s an opportunity for this generation, to impact so many outcomes, so many different futures. We need to do it well, with equity and justice at the heart. It needs everyone.”

Even before the fabric buildings is changed, there are energy savings to be made – but here too we can team up and do this together. The wealth of energy saving advice out there can be overwhelming. Groups embedded in their communities know what’s relevant and useful in their context, and by their trusted relationships and tendrils, they can help raise awareness of what’s relevant.

Think and Do Camden, a partner project of Transition Kentish Town, was running weekly community pop ups when some locals shared they would love to make the switch to LED lighting to save on bills, but couldn’t afford the bulbs. In response, the group set up the Light Fantastic project focused on a Somers Town tower block. Residents stepped forward for training as energy advisors and as a community, they secured funding to switch every old lightbulb in the block to LEDs – something impossible for individual residents to do. There is also a weekly Energy Savers Club, sharing learning, advice and practical support to cut energy use and bills on an ongoing basis.

Think & Do Camden’s Light Fantastic Club is reaching out to households with support and advice, relevant to local residents.

Transition groups such as Transition Ilford, New Mills, Belper and Sustainable St Albans and the fabulously named CHEESE Project in Bristol and Bath support people to work out where heat is escaping from their homes and what to do about it. They have thermal imaging cameras and share advice on how to take action to cut bills.

Some groups are working on low tech solutions. Transition Chesterfield and Transition Dundee are holding events to make draught excluders, sharing skills and using reclaimed materials. These may be small steps, but taken in community, doing something practical, positive and for others sparks hope, connection and creates space for new solutions to emerge.

Can we tackle the cost of energy and climate crisis at the same time? The real question is how can we even try and tackle one without also addressing the other. They are two sides of the same coin, and often result in the same symptoms for those at the sharp end, those with fewest resources who are most impacted by extreme weather, shortages and spiralling prices.

If we are to transition to a better future without poverty and without climate breakdown then those working on both need to connect and work together, and resist any attempt to pit one against the other.  We cannot have thriving, resilient, sustainable communities if some people are barely surviving because current energy, food and economic systems are leaving some struggling to eat or heat their homes. Communities can and are responding, and helping to build new systems to address this locally, but the change is needed everywhere.

Stay tuned for our next article on how communities are tackling rising food prices.