“…across all key basins [oil] production has been relatively flat for most of the past year, and in particular for 2022. …What this means for oil prices is yet unclear in the short term as for the last six weeks concerns about a possible recession have trimmed roughly $20 per barrel from the price of WTI and Brent. Longer term, if this trend toward lower well productivity bears out, we could see a sharp reversal higher, as shale output declines.
David Messler, oilprice.com

“Brent crude prices have averaged $105 per barrel for the first half of 2022, a gain of 48 percent over 2021’s annual average price. However, the sharp gains in Brent have failed to spur similar increased investment across the supermajors peer group…The difficulty in making multi-billion-dollar investments over the long-term term continues to be dogged by uncertainty raised by the energy transition and most majors have chosen to exercise caution and remain balanced in guidance for capital expenditure in 2022.”
Fitch Solutions Country Risk and Industry Research

“The average US price of retail gasoline has fallen by more than USc 80 per gallon (16%) since the mid-June peak, which should support demand in August. However, we think the theory that the US market will bear gasoline prices of USD 5 per gallon for an extended period has now been tested to its destruction.”
Standard Chartered report

According to StanChart data, in July, gasoline demand in the U.S. dropped by 7.6% on the year to 8.592 million barrels daily, which, the report noted, was the lowest demand level since 1997 except for the lockdown-heavy 2020.  (From www.oilprice.com] 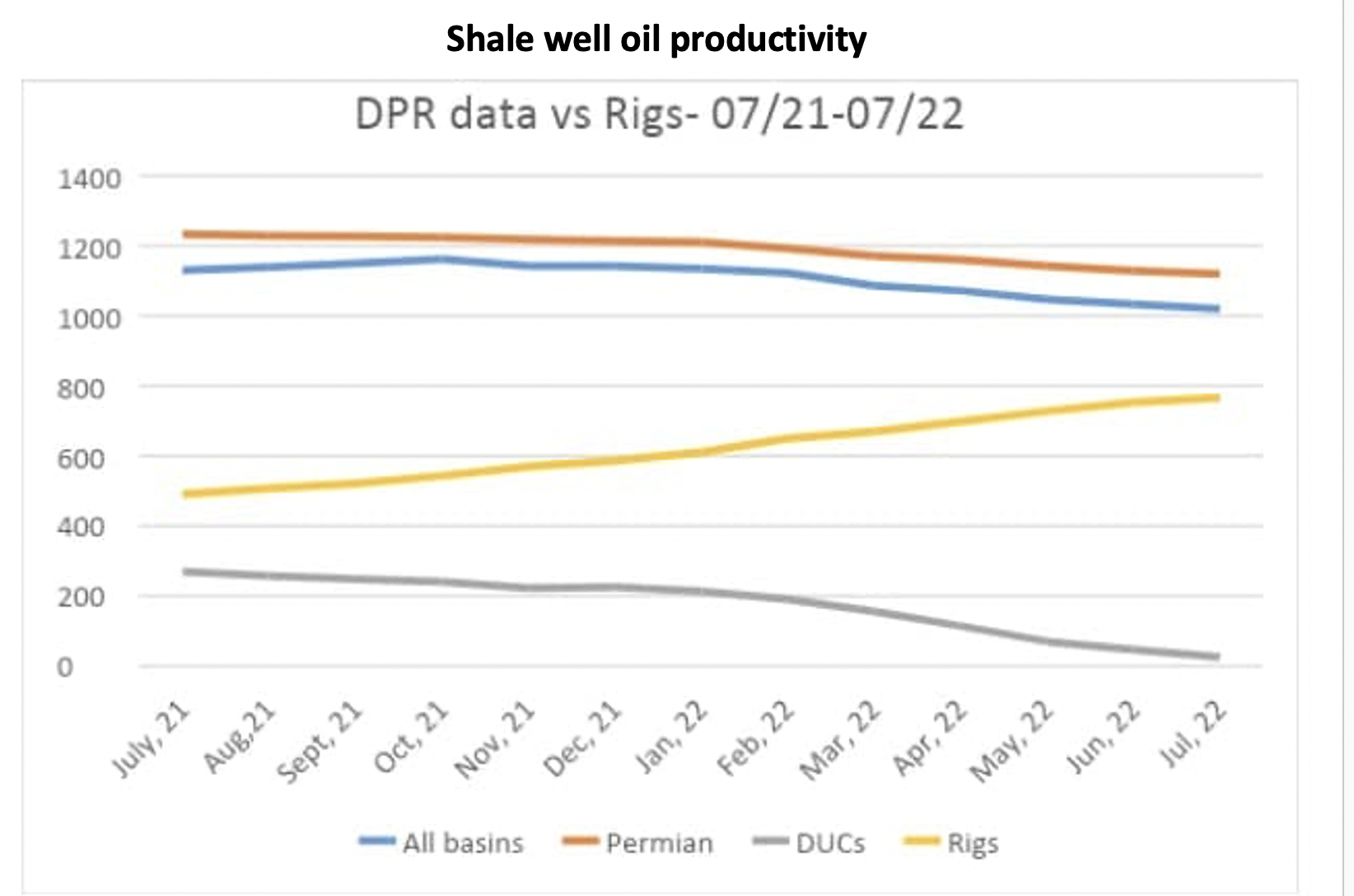 “The DPR monthly report makes a simple calculation of individual well productivity per rig by dividing the production for that month (shown two months in arrears), by the number of active rigs. The data is revelatory in the following respects.
“The blue line, representing all eight basins tabulated in the report, trends down over the last year, while the total rig count as reported by Baker Hughes is rising sharply. The orange line, representing the Permian basin, follows the same trajectory, with daily production declining per well by about 120 bbl per day over this time.
“What is additionally noteworthy about this data is while production is declining as rigs are added – something that is a little counter-intuitive – the rates of monthly DUC-Drilled but Uncompleted wells and withdrawals are also declining. This is suggestive that the daily production rate per rig, already on the downslope, was boosted artificially by operators fracking an already drilled well to turn it inline.”
David Messler, oilprice.com

Offshore drilling is coming back with a bang
IEA raises 2022 oil demand growth forecast by 380,000 b/d
The global diesel crunch is going to get worse
Oil supermajors continue to hold back on investment

Iran signals that the latest nuclear deal proposal could be ‘acceptable’
U.S. says ready to quickly conclude Iran nuclear deal based on EU text
All hopes are dashed for international oil companies in north Iraq

Stocks record their best stretch of the year, as inflation fears recede.

German economy to lose $265 billion in added value due to war, high energy prices – study
IAEA sees “very real risk of a nuclear disaster” In Ukraine
The vast nuclear plant in the eye of the war in Ukraine
Historic drought threatens to cripple European trade
Retailers turn off lights, cut opening hours to save energy

Heat wave in Baghdad sends the temperature to 122, cripples power grid –
Turkey agrees to pay for Russian gas with rubles