Last summer, I was so proud of my little midwestern, central-Illinois town for the efforts our community put into gardening. It felt like anytime I went for a walk, I’d see someone with a thriving vegetable garden, and trading tomatoes for cucumbers was a continuous conversation in the fall.

“I have too many zucchinis, please take some,” a neighbor would beg, pointing at the zucchinis that had taken over her kitchen counters.

Even my landlord permitted his tenants to grow any type of garden in the backyard. Flowers, fruit, vegetables, whatever our hearts desired. When it was time to harvest, he’d collect a basket of fresh veggies and set them on the doorstep of the apartment building for anyone to take. There was so much fresh food, no one went without vegetables that season.

My favorite time of the year is when strangers and neighbors are begging you to take fresh-picked vegetables off their hands. It’s a time that’s always filled with laughter and sharing, and it creates a delightful atmosphere primed for spontaneous conversations with people you may have never spoken to otherwise.

So this March, as I was thinking about what to plant in my own garden, I did a double-take when I heard that city officials were pushing an ordinance to prohibit residents from growing food in their front yards.

Excuse me? How are we still fighting about this? Those were my first thoughts as I sat stunned, making sure I heard every word on the broadcast.

Ward 6 council member Sarah Davis had the best response to the ordinance:

“I’m going to be honest, this might be the most ridiculous ordinance I’ve ever read,” she said. “Is there really any reason behind this other than somebody taking a look at a neighbor’s yard and going, ‘I don’t like what I see?’”

The passion for gardening in this little community showed its strength as many were outraged by the ridiculousness of this conversation. My local newspaper was flooded with letters to the editor and comments all over social media about how absurd this was.

“How about instead of trying to govern people’s private property maybe they should do something to help the homeless population,” one commenter said.

“Is there seriously nothing more important for the city to worry about?” said another.

This conversation seemed even more absurd considering that just last year, Illinois became the second state to enact The Right to Garden Bill when Gov. J.B. Pritzker signed the Illinois Vegetable Garden Protection Act (HB 633). This bill protects the right of all Illinois citizens to “cultivate vegetable gardens on their own property.”

One of Strong Towns’ core insights on local food is “let people grow food where it makes sense.” This includes letting residents grow their own produce gardens in the front yard. There’s many reasons why someone would choose to grow a garden in the front of their home versus the backyard. One reason could be they don’t have a backyard. Or maybe it’s small and the kids have a swing set that takes up what could be prime gardening space. Perhaps there’s a large oak tree, creating a wonderful spot to host backyard hangouts, but blocking the sunlight needed for plants to grow. 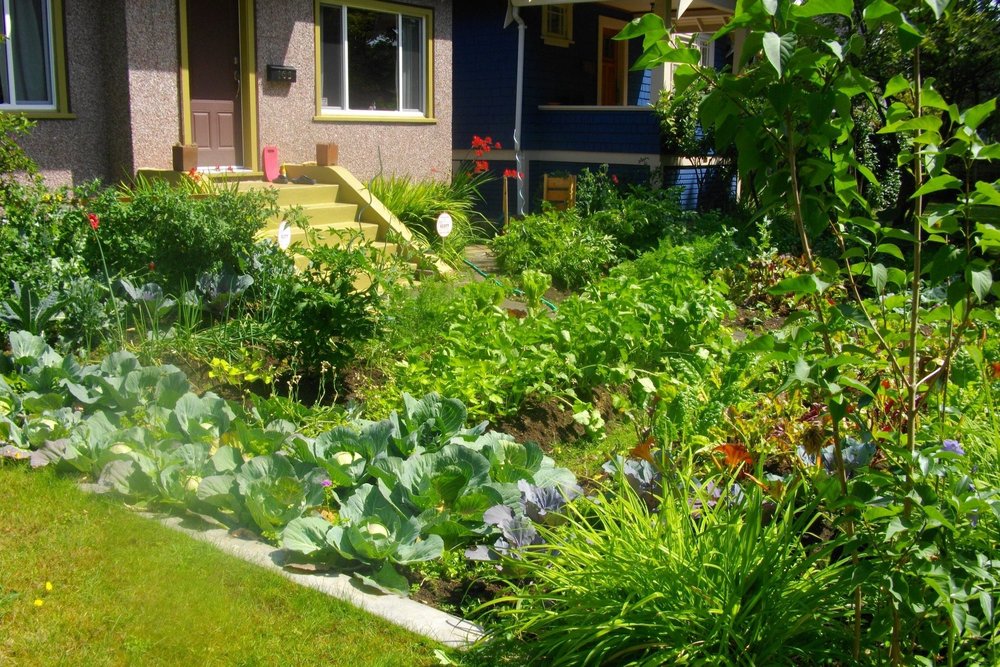 Through this entire process of watching my small town blow up in a fury of online comments over an ordinance, I couldn’t help but ask myself the question: Why are we still wasting time and money talking about a topic that doesn’t warrant fussing over?

Perhaps a citation for some properties who block visibility for EMS vehicles can be warranted, but it makes no sense to throw a blanket rule over the entire city, ultimately limiting people’s food resources.

It seems apparent my community is tired of striving for a sense of conformity, and would prefer adaptability and practicality in their living situations. They want real issues like food insecurities to be solved, not arguments on where cousin Martha can plant her roma tomatoes.

Flat, trimmed, bland, grassy lawns are a thing of the past. Literally, grassy lawns exist to prove you are not a peasant. Big, green lawns became a popular status symbol in the ages of Washington and Jefferson, over 200 years ago. When you had enough financial resources to waste land by priming it for aesthetic purposes only, that’s what you did. Lush green grass not only produces nothing for mankind, but it isn’t productive or helpful in protecting our wildlife, either. With the rise of the “grass makes no sense” conversation over the years, most of us know that big, green lawns do not create friendly habitats for pollinators or other animals and plants that contribute to a healthy ecosystem.

The city officials in my home town noted that the only reason they drafted this ordinance for no front-lawn gardens was because they’d received complaints about food-producing front yard gardens. It was about aesthetics. We were trapped in an argument over what looked nice and what didn’t.

A dozen or so members of the community showed up to the council meeting to speak up against this proposed ordinance of no front-yard gardens, and even more sent letters to council members.

One woman spoke on her experience of being homeless as a child, and how community members with gardens helped keep her alive.

Another pointed out how good, fresh vegetables can be difficult to get at our local grocery stores, as our midwestern town teeters on the edge of being a food desert, so we shouldn’t even be considering limiting where people can grow their food.

The vote to outlaw front-yard gardens came after one of the council members moved to table the ordinance and another council member responded with, “We just need to get done with this.” I couldn’t have agreed more. Let’s focus on making our town stronger, not wasting time over disputes of what’s considered an eye sore.

To everyone’s great relief, the council voted 6–0 against the ordinance. For now, we can continue to have vegetables in our front yards.