We saw a bumper sticker, Twitter post, or something to the effect of, “If your commitment to diversity doesn’t include people with disabilities, you are doing it wrong.” We couldn’t agree more.

“We” would be myself and Heidi Johnson-Wright: my wife of a third of a decade, my soulmate going on four decades, and lifelong public servant who is one of the most brilliant people I’ve known.

Heidi also happens to have been diagnosed with rheumatoid arthritis before age 10 and has used a wheelchair for mobility since she went to college. She is one of the nation’s foremost experts on the Americans with Disabilities Act (ADA), a world traveler, and a great essayist in her own right.

Most of our professional lives have been involved in shaping and reshaping the built environment. In the public and private sector, we have been all about inclusion by any definition.

But, we noticed in the race to declare themselves committed to the worthy pursuits of Diversity, Equity, and Inclusion—corporate America, cities, and academia forget to include Accessibility in that equation.

Although 90% of companies claim to prioritize diversity, only 4% consider disability in those initiatives, according to a report from the Return On Disability Group. This happens even though the United Nations has confirmed there are more than one billion people with disabilities worldwide and the Centers for Disease Control have documented that one in four Americans experience some form of disability.

Disability impacts a person’s mobility—but contrary to what most folks believe, bad design is what limits the ability to live, work, and play in an inclusive environment. The core disability is NOT what prevents a person from moving about their community safely. 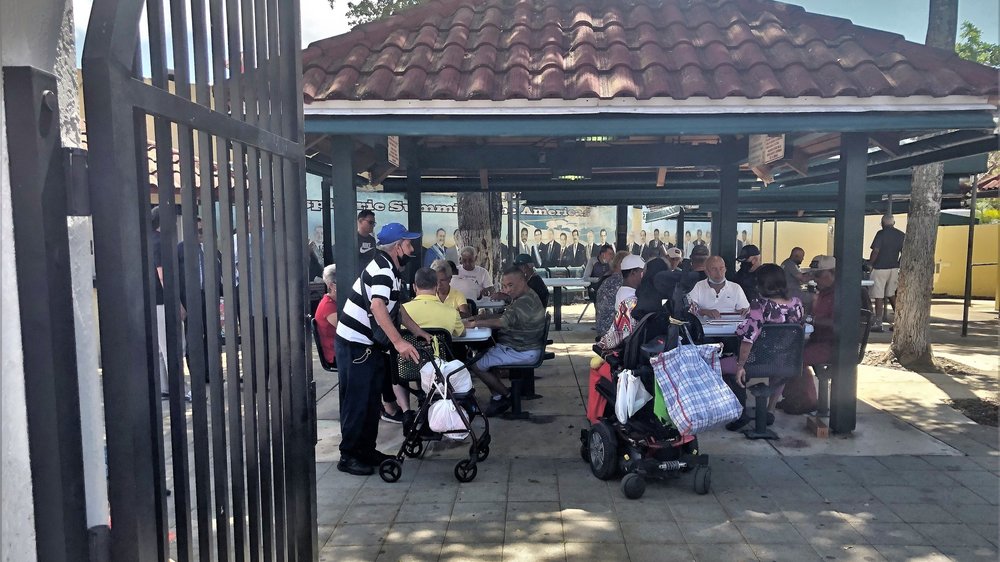 We live in a 100-year-old home in the heart of Little Havana. We are walking/rolling distance from Calle Ocho, the famous tourist attraction and main street of Little Havana. It is filled with galleries, coffee windows, restaurants, live music venues, shops, and attractions that celebrate Miami’s Latin culture and Cuban heritage.

Until the 1960s, Calle Ocho (Southwest 8th Street/SW 8th) was a two-way main street with naturally calmed traffic that people felt safe to cross. In an odd coincidence, just about the time that our neighborhood was ground zero for Cubans fleeing Castro’s dictatorship, the Florida Department of Transportation decided that even though a multilane highway was being developed roughly a mile to the north, Calle Ocho should also be a defacto highway.

So SW 8th, for more than half a century, has been three lanes, one way headed east into the central business and Brickell districts. West-bound, breakneck traffic runs west to the suburbs on the parallel Southwest 7th Street.

The speed limit could be posted as 5 mph, but cars speed, change lanes dangerously and blow through red lights with regularity—all because the bad design tells drivers that they are on a speedway, not an urban main street with older residents going about their day and three million visitors swelling the pedestrian population each year. 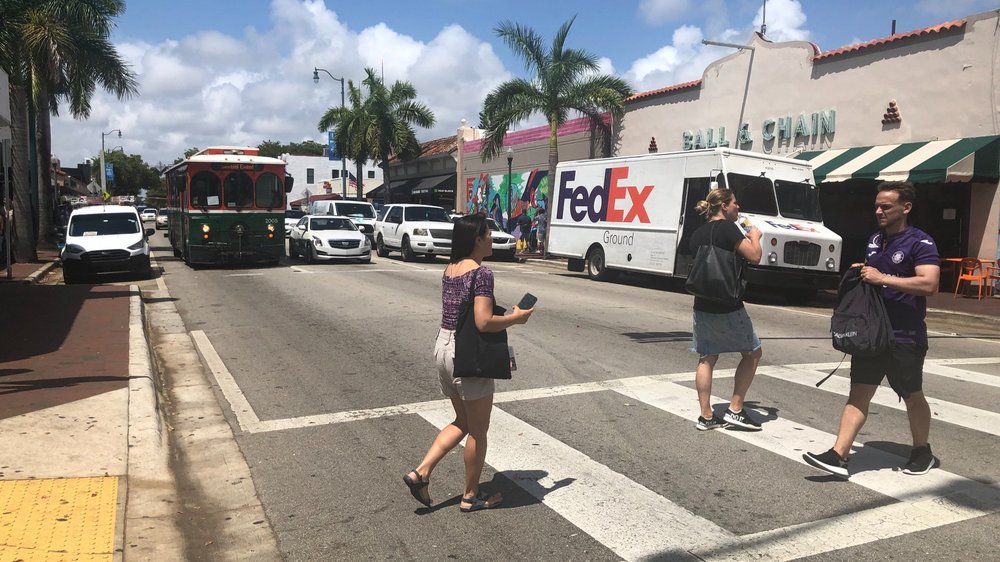 Three lanes of one-way traffic make Calle Ocho dangerous for pedestrians. This is SW 8 St at 15 Ave in heart of tourist attractions.

Heidi is an ADA expert and fiercely independent. But she will not cross Calle Ocho without me to watch out for her. Bad design simply makes it not worth the risk. Hundreds of our adopted abuelas and tias also will not cross SW 8th, even if the best pan Cubano or café con leche is on the other side of the street.

Even when many residents and business owners begged for calmed, two-way traffic during a recent redesign process, FDOT rejected the notion. It basically sacrificed our safety so people who live in the western suburbs can have a streamlined commute. Little Havana’s famous main street will remain dangerous for children, older people, and people with disabilities.

Even though design for people with disabilities makes for great, prosperous cities with efficient transit; vibrant corridors; and compact, walkable, mixed-use, mixed-income development, Universal Design is a foreign concept to the vast majority of towns and town planners. Coined by the late architect and planner Ronald L. Mace, Universal Design is defined as “the design of products and environments to be usable by all people, to the greatest extent possible, without the need for adaptation or specialized design.” This is a crucial concept, because America is aging at a larger scale than ever before. Fewer than eight percent of Americans were 65 or older in 1950, but by 2030, AARP predicts that population will increase to 20 percent.

Thanks to the dedicated leadership at the University of Miami School of Architecture, Heidi and I are teaching young designers to create spaces that accommodate all. We are so passionate about Universal Design that we are donating 100% of the proceeds from this course to support further outreach and education about making design inclusive for all on a global scale.

We hope that through these efforts, future townmakers will understand that safe streets are just one element of Universal Design—just one way in which it benefits cities for everyone, not just people with disabilities. And certainly not just for cars, which are what our places are currently built for.

(All images for this piece were provided by the author.)

To Cook or Not To Cook: The Question of Polycyclic Aromatic Hydrocarbons

To Cook or Not To Cook: The Question of Acrylamide