With war in Ukraine, the EU institutions made a concerted effort to shore up its highly exposed agri-industrial food system this week. Emergency money and ecologically protected lands are to be used for food security – as expressed through animal feed and mineral fertilizer supply. Along the way, delays and derailings to greener transition have occurred in pesticides regulation, in environmental elements of CAP, and more. So is the EU Green Deal becoming pie in the sky? Oliver Moore and Ashley Parsons report.

Two years after the Green New Deal standards have been set, the EU Agriculture Council responsible for implementing the Farm to Fork strategy has failed to show they are committed to the approach when push comes to shove.

On Wednesday March 23, the Council was set to review proposed reforms of the Sustainable Use of Pesticides Directives (SUD). The directive was set to become a regulation on Sustainable Use of Plant Protection Products (SUR). But, the subject is off the table, being pushed down the line until “before summer,” with the invasion of Ukraine and food security concerns being cited as the reason. Stronger pesticide regulation inline with the Green New Deal targets would arguably strengthen Europe in the face of food insecurity but we digress.

Fearing this outcome, on Monday, a group of 50+ NGOs and activism organization, released a letter to commissioners, urging them not to push the issue aside for later, but to take action now as planned in order to better prepare and protect Europe in the future. The main demands of the letter were for the council to:

Speaking on Monday, March 21, food safety Commissioner Stella Kyriakides said it was “not yet decided” when the draft directive would be tabled.

“One could argue that the generalised geopolitical uncertainty at this point does not allow this proposal on the sustainable use of pesticides the political space it needs for further proper discussion and reflection,” she said during the meeting. According to the agenda, “before summer,” is the new timeline.

“postponing the publication of the Sustainable Use Regulation and the Nature Restoration Law is a very negative signal given to EU citizens, especially when no date is proposed. The current crisis is linked to the prices of feed, petrol and synthetic fertilisers: they highlight how vulnerable our model of intensive agriculture is and how dependent the EU is. It confirms we need more Farm to Fork to make our food systems resilient, not less!”

And yet, there remains support for continuing and even expanding the use of plant protecting products. DG AGRI Deputy Director General Michael Scannell told AGRI MEPs on 22nd March of the EU rice shortfall and difficult weather conditions in Spain and Portugal:

“Plant protection products are also very topical,” he said, “including in relation to imports, with the sector having a little long-standing grievance that over time they have an increasingly smaller range of products, which they can use in comparison with the producers in third countries.”

On Wednesday,  a Food Security announcement by the Commission freed up emergency money, and allowed for CAP greening changes. It at least pointed to the needs and benefits of more agroecological approaches outside of the immediate crisis.

Similar mixed messages emerged from the Plenary vote in the Parliament. The now typical battle between emergency feed for industrially housed animals, and pivoting away from the exposure to high cost (environmental and, increasingly, economical) inputs reared its head again. The green deal opportunities and necessary adjustments were ‘noted’ and ‘considered’ for some time in the future, whereas the expansion of pesticide use and productive land into nature areas were ‘called for’ now.

The 16 page resolution of 24th March was primarily about food security and food aid for Ukraine and a diversification of input supply of feeds and fertilizer in Europe. This included supporting measures on securing cash flow, emergency state aid, private storage and inputs for farmers. It also saw more emergency concessions on the environment put forward by MEPs.

“Given the disruption to agricultural imports, MEPs demand domestic food production be increased. Agricultural land should be used only for the production of food and feed. To address immediate needs, MEPs want it to be possible for farmers to use fallow land for the production of protein crops in 2022. The Commission should also provide support for worst-affected sectors and should mobilise the crisis reserve of €479 million. Member states should also, according to MEPs, be allowed to grant broad, rapid and flexible state aid to operators on the agricultural market.”

Highlights from the text adopted

The 16 page text adopted has some notable elements. Below are some direct quotes of relevance.  Emphasis in bold added.

“Calls on the Commission to give Member States the flexibility to temporarily allow agricultural production by farmers on Ecological Focus Areas, making use of plant protection products and fertilisers if necessary.”

“calls on the Commission, in light of the need to overcome the immediate shortfall of protein crops, to accelerate the administrative procedures to make it possible during this CAP transition year to use fallow land for the production of these crops.”

States that “national strategic plans should be assessed to make the necessary adaptations to the new circumstances, including the use of relevant flexibilities to increase the acreage of lands under production…”

“…in light of the current market circumstances, the ambition of a 10 % reduction in production areas cannot be implemented” (aka space for nature).

Some references to the European Green Deal and its elements, including farm to fork were retained. While some of these repeated earlier calls for impact assessments and other obstructions, many mildly worded and future-orientated elements at least retained the focus on improving sustainability.

“in order to reduce dependence on chemical fertilisers, alternative organic sources of nutrients and nutrient cycling should be utilised to the fullest extent as soon as possible; calls on the Commission to address legislative and practical barriers to the realisation of this solution in order to reduce the dependence on imports of fertilisers, first via a switch to organic fertilisers and then via further support for research and new innovations at EU level; calls on the Commission, in particular, to take the necessary measures, including legislative ones, to enhance the use of organic fertilising products obtained from sewage sludge, processed manure, biocharcoal and frass in order to substitute chemical fertilisers, in line with the objectives of the Farm to Fork Strategy”

“considers that in line with the rapid implementation of the Unfair Trading Practices Directive, particular focus should be placed on the viability of farming, fishing and aquaculture, and on the significant role of retailers in determining fair returns to producers…”

IOFAM EU noted that the vote maintained the integrity of the Farm to Fork. The organic farming and industry organisation said it

“welcomes the European Parliament’s support to the Farm to Fork Strategy as the right policy direction to make European agriculture more resilient and independent. The resolution on food security adopted in today’s plenary is a positive political signal, especially considering the weeks of intense lobbying to undermine the EU’s ambition to make agriculture more sustainable”.

Nevertheless, IFOAM EU also pointed to biodiversity concerns, including “temporal authorisation for the use of pesticides on Ecological Focus Areas.”

Some EPP (European People’s Party) amendments were rejected in the vote, such as amendment 8, 9 (below), 10,  proposed by Herbert Dorfmann, which would have seen delay of Farm to Fork Strategy and Biodiversity Strategy (8)  and the postponement of the EU Green Deal’s pesticide, nature restoration and due diligence elements had they passed (9). (image via CEO and this thread) . 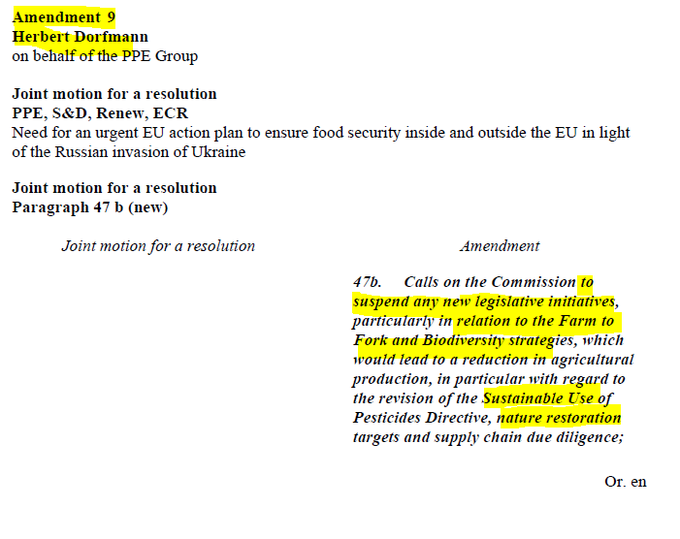 Others were less sanguine than IFOAM EU. EEB’s Celia Nyssens called the vote, which went 413 for, 120 against and 49 abstaining, “extremely disappointing” and “shameful”.

Extremely disappointing vote in @Europarl_EN: 413 MEPs approved a resolution which
❌Spreads misconceptions of #FoodSecurity
❌Pushes false solutions that will accelerate #BiodiversityCollapse and do nothing to aleviate hunger.

For a really comprehensive thread on what the now set-in-motion loss of fallow land around Europe will mean for biodiversity, this by Guy Pe’er is well worth a read.

The EU has just decided to cancel fallow land for the year 2022 and, thereby, remove a critical habitat for biodiversity and for ecosystem services that is central for maintaining agricultural production. Seemingly it’s “just for one year”, yet it has severe implications. Thread.

To conclude, let us consider the famous phrase ‘pie in the sky’. It is used, primarily, to refer to something that simply won’t happen – something that’s ridiculous or impossible. These things are like pie in the sky. The origins of the phrase however, are a little more understandable, mundane, but also just as relevant. The phrase refers to the religious idea that salvation will come in a future heaven. Those who argued for a better life now – heaven on earth as it were – thus argued against ‘pie in the sky’ – against deferring striving for a better world now.

Yet again, now is supposedly not the time to do the very things that would reduce our exposure to destructive inputs. There is a fear that this terrible war in Ukraine will give European business-as-usual forces one more excuse turn the EU Green Deal into that potentially perfect but always elusive pie in the sky.