A grassroots project in India is turning fish guts that once polluted beaches into a useful commodity.

Text and images by Meenakshi. J

Under the simmering heat of the morning sun, fishers in Kasimedu harbor in Chennai, the capital of India’s southeastern state of Tamil Nadu, busily sort their haul caught early that morning. They put aside the best fish to sell at the nearby market and toss anything rotten or unwanted onto the beach. Just up the lane, muscular butchers prepare the fish for market, chopping away inedible parts, periodically scraping clean their bloody butcher blocks into nearby plastic crates, which are dumped on the beach so the rising tide can do the cleanup.

As the stalls open and the crowds descend, the volume in the Kasimedu market—Chennai’s largest and one of the country’s oldest fish markets—rises. Vendors try to outshout one another as they vie for customers. The noise increases and so does the heat and stench of the fish waste cast onto the shoreline with its attendant mosquitoes, flies, and stray dogs.

The fishers and vendors at Kasimedu are not alone in their tactic to dispose of unwanted fish. Leaving fish waste to rot on the beach to be dealt with by scavengers and the rising tide is tradition in many of India’s fishing communities. The problem is, it rarely works. Rotten fish parts stay afloat only to be deposited again ashore, says Kennit Raj, a local fisher. “The deposits rot further to impart a stink,” he says, “and [this] contributes to the stigma associated with fisher communities in India.” 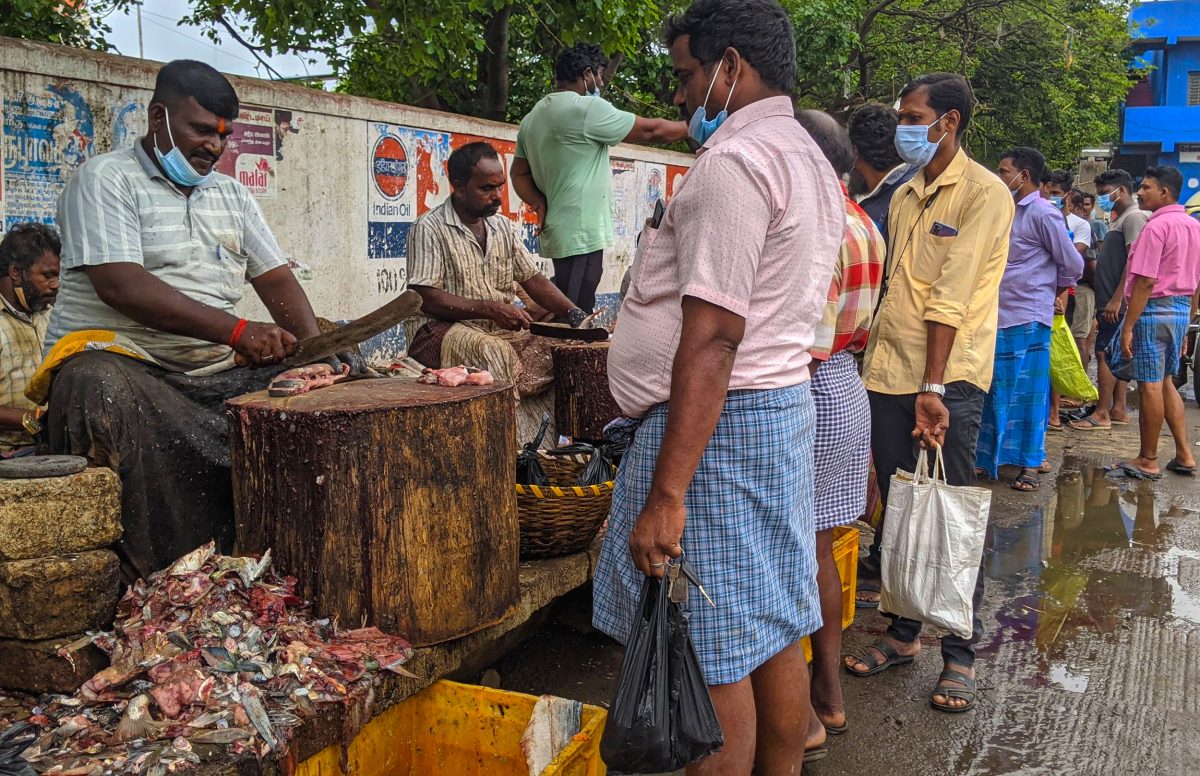 Along the “butcher’s lane” of the Kasimedu market in Chennai, India, butchers prepare fish for sale. Waste scraped off their chopping blocks is often dumped on nearby beaches.

A large population, an increasing demand for fish, a warm (and warming) climate, and the lack of action by local pollution control boards has led to an overflow of fish debris along India’s 7,500-kilometer-long coastline. To tackle the problem, the country’s Central Institute of Brackishwater Aquaculture (CIBA) under the Indian Council of Agricultural Research has teamed up with local people to turn this waste into wealth.

“Fish waste is of major concern in a densely populated country like India,” says Debasis De, a principal scientist and team leader of the fish waste to wealth program at CIBA. “It renders the coast unhygienic and uninhabitable for fisher communities.”

Under the Swachh Bharat (Clean India) campaign, CIBA approached fishers near Kasimedu with a plan to use the agency’s innovative technology to convert fish waste into fertilizer products.

Kennit and his wife, Velangani, both in their 40s, signed up along with 150 other fishers from across the country. CIBA provided training and the equipment to convert fish debris into two value-added products: PlanktonPlus, used in aquaculture to boost healthy plankton, and HortiPlus, an organic manure for horticulture. The training and equipment were provided to the Rajs free of charge since they were deemed to be from a marginalized community. (CIBA offers the training free to anyone, but charges US $750 for the equipment to those who can afford it.) CIBA works most directly with aquaculture farmers, but saw the waste to wealth program as a way to benefit local people, clean up the local environment, and help boost aquaculture efforts.

“We deal in aquaculture,” says Mahalakshmi. P, principal scientist and a member of the core team at CIBA, “but also closely work with welfare activities for fishers in Kasimedu.” 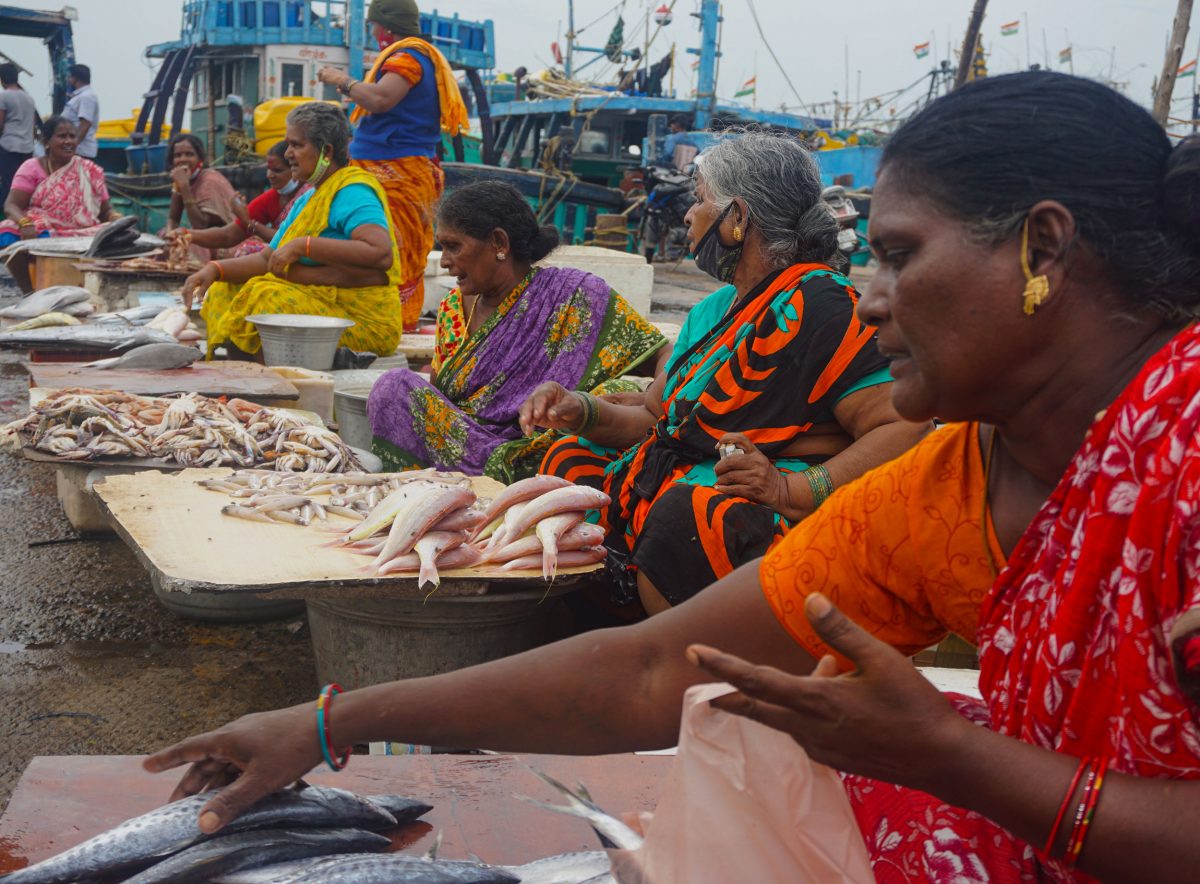 The fish-processing units provided by CIBA are affordable and easy to operate and clean, explains Mahalakshmi, providing access to fishers from low-income families who cannot afford fancy equipment nor interpret complicated instruction manuals. CIBA also provides a patented enzyme, which they say is more efficient than similar products in use. “We achieve 100 percent utilization with nil wastage,” says Debasis, one of the innovators of the technology, explaining that, unlike other products, CIBA’s “proteolytic enzyme” also digests bones and fat.

Once the Rajs received their training and equipment in 2018 and found a place to set up the unit, they were ready to launch their enterprise. First step? Collect the fish waste. Although private entrepreneurs gather fish waste from beaches to recycle it into fish meal and dog food, there’s still no shortage of waste. There is tonnes of debris around fish markets and shores, explains Kennit, as he dons blue gloves and a mask and prepares to collect fish waste along with Murugan, a fisherman who is doubling as his driver. “This additional income helps in running my family,” says Murugan. The pair often work together, collecting fish waste in plastic crates, sometimes in an autorickshaw and other times in a mini truck.

“We collect fish waste from 10 or more fish markets in a 20-kilometers radius around Kasimedu fish market,” says Kennit.

For each kilogram of fish waste collected, he pays Murugan $0.07 [five rupees] and covers the cost of fuel.

They deliver the fish to Kennit’s processing unit near Kasimedu harbor and fire it up. The unit resembles an oversized funnel and operates something like a large food processor. The fish waste is ground through the sharp metal blades and emerges as a dark-brown mushy concentrate that is mixed in huge tubs with the CIBA enzyme solution. Then we seal the lids tightly, says Kennit, and leave it to settle and ferment for three or four days. 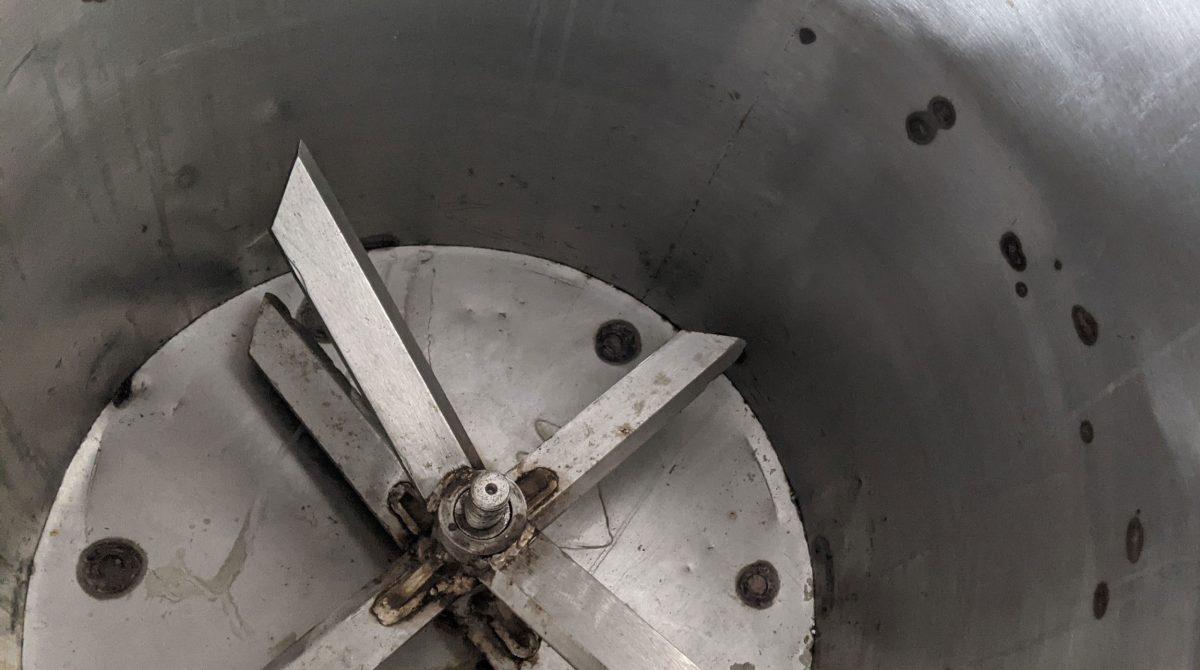 Small grinders are part of the fish-processing units used by Kasimedu fishers to convert fish waste into value-added fertilizers. The units are supplied through India’s Central Institute of Brackishwater Aquaculture, which provides training and equipment to fishers and their communities.

The final stage is to filter the slurry and separate it into the two end products: the liquid fertilizer, PlanktonPlus, which needs no further treatment; and the solid, HortiPlus, which is sun-dried to obtain an odorless manure. About 50 kilograms of fish waste yields around 40 kilograms of liquid fertilizer and one kilogram of powdered manure, explains Velangani. The products are then packaged and sold to retailers.

When they first started with the project in 2018, Kennit and Velangani worked a fish-waste processing unit as part of a 15-member team put together with assistance from the Nambikkai Fish Farmers Group, of which they are members. For the past three years, they’ve operated their own unit near their home in Nambikkai Nagar. This has greatly helped in cleaning up the nearby beach and fish markets that would otherwise stink of rotten fish and has helped supplement the incomes of other fisher families like Murugan’s.

Kennit and Velangani’s work benefits them and their community, and it has not gone unnoticed by the government, which recently gave them an award for their efforts to curb coastal pollution and to create jobs in coastal communities. Inspired, with CIBA’s assistance, Kennit and Velangani customized a larger and more efficient processing unit that can grind up to 1,000 kilograms of fish waste within a couple of hours, unlike the smaller units that grind just 100 kilograms in about the same amount of time. And to accommodate it, they moved into a bigger space in Kasimedu fishing harbor, 10 kilometers from their original location, and employed a small team to help them.

“We used to collect approximately 250 to 350 kilograms of fish waste during weekdays, and 800 to 1,000 kilograms on weekends,” Kennit says, “and then we realized a need to customize the plant to accommodate larger quantities of fish waste in less time.”

The move away from a residential area was welcomed by local people. “Our neighbors started complaining about the intolerable smell,” says Velangani, an ironic situation given that beaches polluted with rotting fish instigated the project.

Along with the odor concerns, another challenge for fishers keen to participate is that each processing unit requires at least 75 square meters of space to operate efficiently, and there are storage requirements for the drums of finished fertilizer. This sort of space is a luxury in many parts of India, yet CIBA still sees the technology as a win-win. Debasis roots for the project, saying that it has helped clean up fish markets across the country and provides alternative livelihoods to coastal communities. It’s “a concept of the circular economy,” he says. 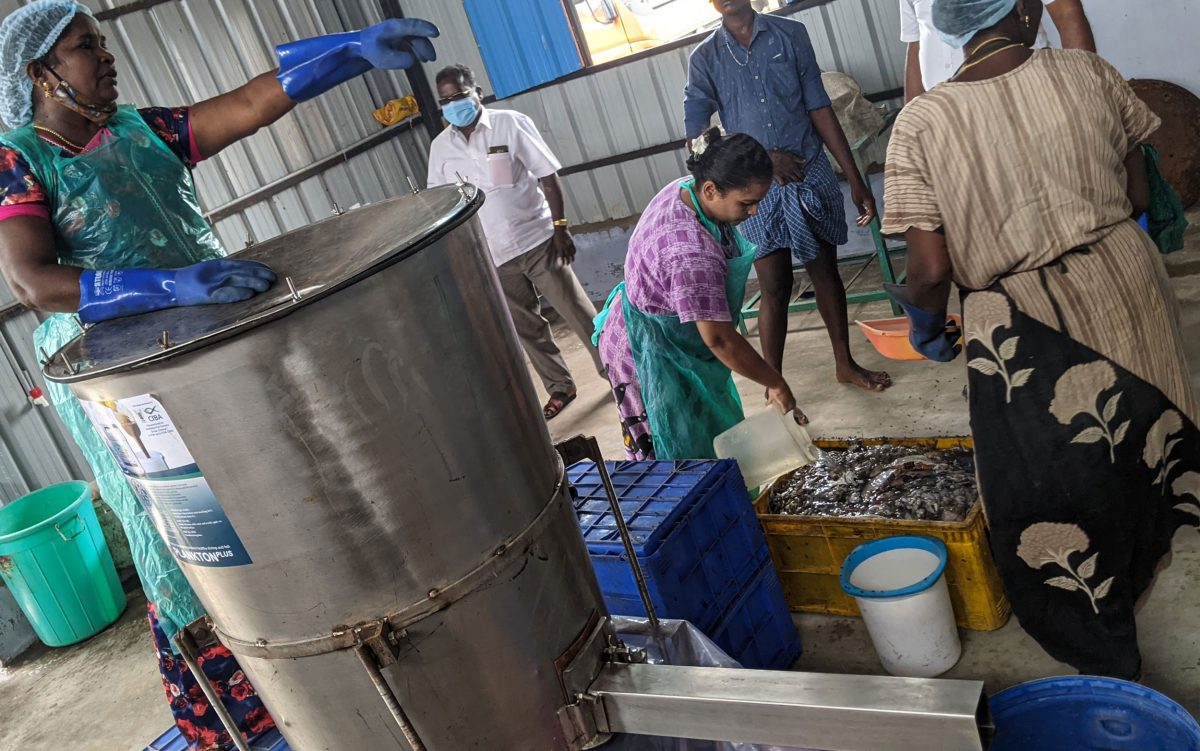 Kennit agrees and has seen firsthand the benefits of the small business and the end products.

“HortiPlus has boosted the growth of coconut and okra back in my village,” he says, adding that “regular users of these fertilizers are happy with [their] quality and results.”

The pandemic and intermittent lockdowns in India curbed aquaculture and fishing, and thus the production of fish-waste fertilizer. Many members of Kennit’s team left to take odd jobs elsewhere when fishing came to a standstill, leaving him with just seven people and a surplus of unsold stock. But he remains optimistic and has plans to install a few more processing units along the coast of Tamil Nadu, providing additional income to others in the fishing community. He vouches for the prospects of the enterprise and the monetary security it’s brought his family, which includes two teenage daughters.

“The sea has been our source of living and we are nothing without it,” says Kennit. “My wife and I are determined to leave it clean for future generations.”

Teaser photo credit: In Chennai, India, fish processing waste that once polluted beaches is being transformed by local people into value-added products for use in aquaculture and agriculture. Photo by Meenakshi. J