Transition Network’s ongoing evaluation project has heard from Transition groups around the world, creating an inspiring snapshot of the work groups are quietly getting on with on the ground. We wanted to hear a bit more detail about some of them, so sent Rob Hopkins off to gather some stories. Here he chats Andrew, Jeremy, Leigh and Annisha to hear more about the work of Transition Toronto.

The principle in Transition of focusing your energy on what you are passionate about is beautifully captured in the work of Transition Toronto in Canada. While COVID meant that some of their key projects, such as their annual EcoFair, which they co-present with the Green Neighbours Network, had to go virtual, two key projects, TreeMobile and Food Up Front really came into their own.

TreeMobile (pronounced in the same way as ‘Batmobile’) is described by the group thus:

The idea is simple but effective. In the winter, Virginie Gysel, landscaper and the founder of the TreeMobile project, contacts tree nurseries, reserves trees and shrubs (edible species only) which will do well in the local climate. In February the website opens with a big fanfare to take orders. The money people spend is used to buy the trees, which are then delivered to people, and often, if the buyer so wishes, planted for them. 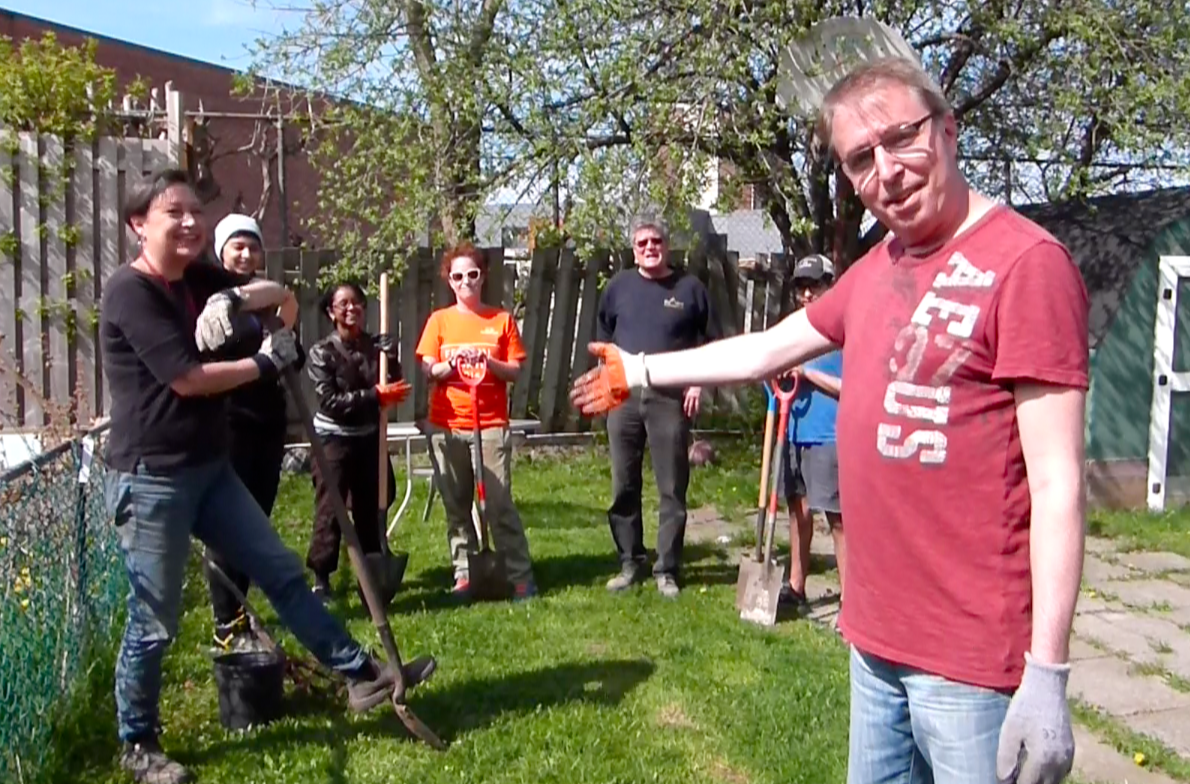 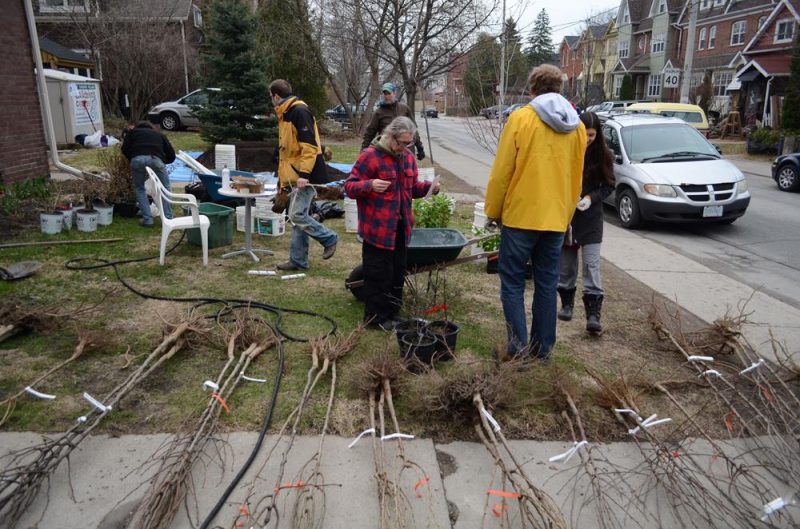 In each case, the local Transition (or other community) group co-ordinate promotion, sales and plantings for that place, and keep a portion of the profits. The customer benefits from high quality trees cheaper than they would pay elsewhere. Since its inception, TreeMobile has been responsible for the planting of over 16,000 plants, which includes over 1000 trees.

The other project that is central to Transition Toronto is Food Up Front. They describe the aim of Food Up Front as being “to help you gather your community around local food”. The idea is to make free seeds available to people across the city so they can start growing food on their balconies, in the gardens or, ideally, in their front gardens in a very visible way. 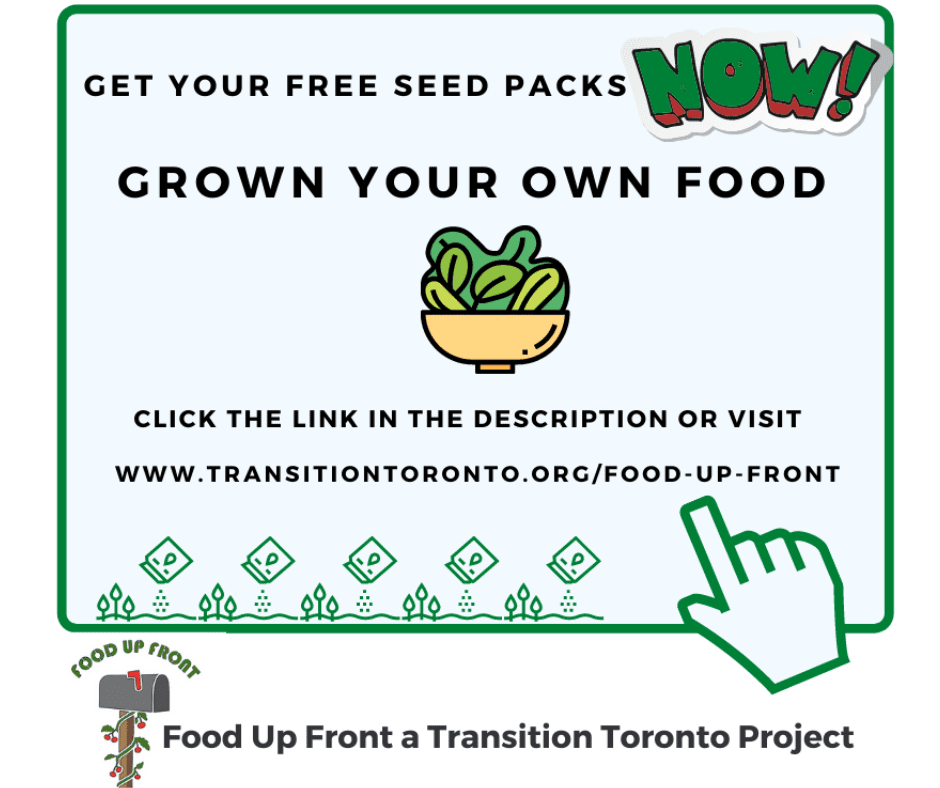 Another aspect of the scheme is that the seeds are hand-delivered to people via volunteers through a network of low carbon deliveries. Here’s their invitation to potential seed deliverers:

“If you have a bike, skateboard, rollerblades, like to walk, have a car etc. we encourage you to join our team to help deliver seeds to a diversity of people across the city. It is a fun way to discover different parts of the city, while helping to create more sustainable and resilient communities by connecting people around food!”

Food Up Front was started by Mark Stewart who was a Seed Librarian at the Toronto Botanical Garden who was inspired by the vision of people growing edible plants in a very visible way. In the first year, he delivered 3000 packets of seeds on his bike! Last year Mark moved on from co-ordinating the scheme, and Leigh took over.

The first year of COVID was easier: people wanted to get out of the house, have some exercise and growing food was ‘in’. Finding volunteers was harder work in 2021, but the scheme still ran, and delivered more seeds than the previous year. There is a sense that the workload of running the scheme this year means that the model will need some revision for 2022. 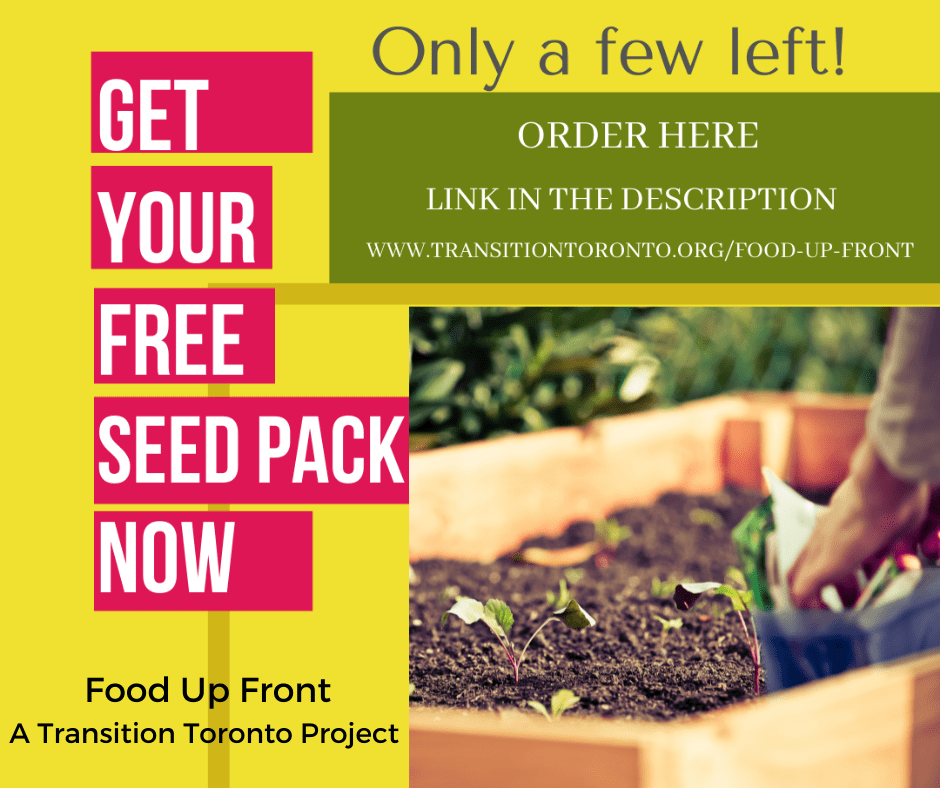 Food Up Front buys 11 different seed varieties suited to the local climate in bulk, and some other seeds are donated to the scheme. These are all then weighed and packed by volunteers before being delivered. Their dream is to get a whole street involved, to have a Food Up Front street, full of vegetables being grown, but that hasn’t happened yet. Research suggests that 40% of those accessing seeds through Food Up Front have never gardened before, 30% of have done it for one or two years, and the rest are longer term gardeners. In 2021 they distributed around 3500 packets of seeds.

Transition Toronto recently worked with Annisha Stewart to create a community garden in a more low-income part of the city, an affordable food desert, working on the principle that access to good healthy food should be the birthright of everyone who lives in a city. The garden benefitted from trees that were donated, and planted, by TreeMobile, as it has benefitted from inputs from many different community organisations. “We were so grateful to receive awesome trees!” she says. “We really appreciate them”.

The challenge was to find a niche in a city that already has many different groups doing different community/sustainability/regenerative projects. “What can we do that no-one else is doing that also fits in with the Transition approach?”, they wondered. In 2013 they became a not-for-profit organisation with a board. While the temptation is to do a wider diversity of projects, Transition Toronto have found their niche, and are focusing on projects with a very real impact on the city.

After being involved with the movement here since its inception, I wanted to ask Andrew how it had impacted his life, his outlook on the future and on what might be possible. “The only reason I had kids and started a family was because the Transition movement inspired me that we could do this” he tells me.

From Tiny Acorns: celebrating 21 years of the Kinsale permaculture course

“Hope with its sleeves rolled up” blooms in Wellington