The decades-long push to get large investment funds to pull their money from destructive oil, gas and coal has made several major leaps forward in the past month. One of the biggest occurred Oct. 18 when the Ford Foundation, a nonprofit built on profits from the combustion engine, announced it would divest its endowment from fossil fuel companies.

The foundation also promised to invest in renewable energy companies and funds that “address the threat of climate change and support the transition to a green economy.”

Fossil fuels represented a relatively small percentage of the Ford Foundation’s total investment portfolio, but even a fraction makes a huge difference when you’re worth $16 billion.

That’s a point activists and community organizers have been making with increasing regularity over the past decade. And their growing success shows that collective voices for change can make a difference.

“Most people don’t have an oil well in their backyard, but everyone lives near some pot of money,” says climate activist Bill McKibben. “And so the climate fight has come to college campuses, to church denominations, to union halls with pension funds. It’s made the abstract very real for millions of campaigners.”

McKibben first advocated for fossil-fuel divestment in 2012 as a way to “revoke the social license of the fossil fuel industry.”

A report from the World Meteorological Organization on Oct. 25 revealed that greenhouse gases hit an all-time high last year. This follows a report from the UN Environment Programme that found world governments still have plans to blow way past their Paris Climate Accord commitments and keep extracting fossil fuels — “240% more coal, 57% more oil, and 71% more gas than would be consistent with limiting global warming to 1.5°C,” the goal of the climate agreement.

At the same time, the number of fossil fuel company bankruptcies has soared — more than 100 in 2020 in the United States alone — and their access to capital has in some cases receded, although many banks continue to pour their money into oil and gas.

Still, it’s not bad for a movement many were ready to write off just a few years ago. Now, McKibben says, divestment has “turned into what’s probably the biggest anti-corporate campaign in history. It’s not only badly tarnished the social license of these companies but dented their access to capital so badly that Peabody Coal called it one cause of their bankruptcy and Shell Oil said it was having a ‘material adverse effect’ on their business. Since their business is having a material adverse effect on the prospects for life on earth, turnabout is fair play.”

The turnabout came from many fronts in October, including 72 faith institutions and several local governments. New York City pledged that its retirement fund investments would achieve net-zero emissions by 2040 while doubling its investments in clean energy, efficiency and climate solutions. Baltimore signed legislation to achieve the same goal by 2050. 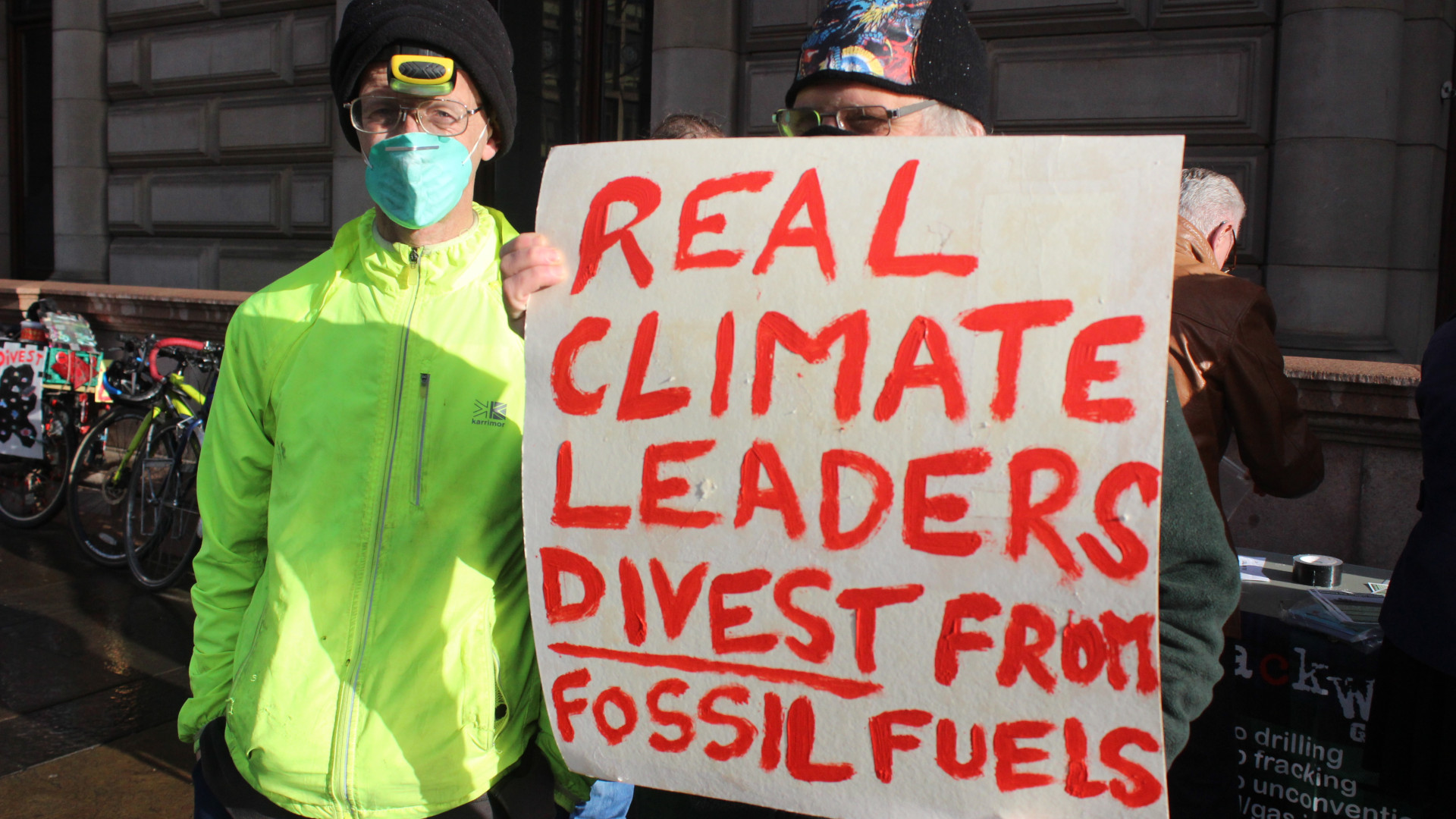 Photo: Ric Lander/Friends of the Earth Scotland (CC BY 2.0)

Similar student-led calls to divest took off this month at California Polytechnic State University and the University of Virginia. They all follow the example at Harvard University, which announced plans to divest its $53 billion endowment in September following nearly a decade of protests.

How can other schools make similar progress? In an essay for Fast Company, a Harvard student organizer suggested using creative tactics such as emphasizing fossil fuel investments’ legal and financial risks.

Is the divestment movement just starting to warm up? The pressure and devolving social license have even started to influence business leaders’ decisions. This month five major investment groups with a collective $60 trillion in assets called for the utilities in which they have holdings to decarbonize by the year 2035.

All this forward motion proves the effectiveness of the divestment movement and the failing economics of fossil fuels, but not everyone is getting the message. This month a notorious climate-denial website called the divestment campaign “the dumbest movement in history.” That shows how much activists have gotten under the skin of those who still have the most to profit from oil, gas, coal and climate disinformation.

The Extinction Crisis in Watercolor and Oils: Using Art to Save Plants