“When I was doing my PhD in 2015 we came across a sea turtle that, of all things, had a plastic straw stuck in its nose,” says marine biologist Christine Figgener, who was working to save these creatures. “That was the last straw.”

At the time, Figgener posted pictures and a video (note: disturbing content) of removing the straw from the turtle. The video went viral (at time of publication, it had more than 42 million views).

That, she says, “helped me to gain a larger platform. It wasn’t just the people in my project [who could witness the problem], but all of a sudden I had a global reach with my message about plastic pollution and its detrimental effects, and the discussion of what can be done to curb this overwhelming problem.”

Figgener is now the director of science and education at the Footprint Foundation, an organization that aims to eliminate plastic pollution and educate people about its toxic impact on the planet.

Dave Ford, founder of Ocean Plastics Leadership Network (OPLN), had a similar “Aha!” moment. Ford was a salesman at various corporations. A falling out with an employer led to his decision to journey halfway around the world to India on a waste tour. He had always been aware that plastics were an issue, he says, but until he arrived in Delhi he had no conception of the true scale of the problem.

“I saw this giant landfill that was like a mountain on the outside of town,” Ford recalls. “Half of it was smoking and on fire, and the other half had hundreds of people picking waste out and thousands of hawks living off of this trash. I could never forget it.”

Back in the United States, he founded OPLN to try to set corporations and country leaders on paths to shrink the mountains of plastic littering India, the ocean, and the rest of the world.

In the Seas, in the Air, and in Us

Plastics are a scourge we all know too well. After more than 150 years of plastic production, this material has invaded every living corner of the Earth. Every room and building and object we purchase is covered in or surrounded by plastic: plastic wrappers, plastic toys, plastic signs, plastic building blocks … the list is endless.

What the world may have received in “convenience” via mass production, it has lost in health — of humans as well as nature. Seals and sea turtles choke on plastic bags, children ingest microscopic pieces of plastic every day, and viewing the stomach contents of dissected dead seabirds nauseates us.

The health risks of ingesting microplastics are not yet fully understood, as we’ll discuss further below. But these minuscule particles have been found in human feces by scientists who concluded that humans may be consuming around 39,000 to 52,000 particles of microplastics each year. People also inhale microplastics, the researchers point out, which raises the number of particles to more than 74,000 per year. Microplastics are also being found in human placentas. Microplastics can absorb chemical pollutants and concentrate them, exposing marine organisms that ingest them to toxic effects. Furthermore, recent research has shown that microplastics may function as carriers of human pathogens, which bind more strongly to plastic waste than to natural surfaces.

All this information, combined with the known risks of exposure to the ingredients of plastics plus the knowledge that the microplastics are killing sea life, should alarm policymakers enough to start taking severe measures to curtail plastic proliferation.

That has yet to happen on a remotely adequate scale.

The ultimate symbol of plastic waste, the so-called Great Pacific Trash Vortex, is actually several patches that together are estimated at the size of “three Frances, or 1.6 million square kilometers” and consist of up to 3.6 trillion items swirling in the Pacific Ocean hundreds of miles from shores.

In recent years many communities worldwide have begun to push back against the ever-expanding plastic plague. Some places, including the U.S. states of California, Connecticut, Delaware, Hawaii, Maine, New York, Oregon and Vermont, have banned the use of single-use plastic bags, and others, like the European Union, have limited plastic wrapping of products. Responding to a public campaign led by two teenage sisters horrified by what was happening to their beautiful island, in 2019 the Indonesian province of Bali banned single-use plastics including bags, straws, and things made of styrofoam. That success spurred the sisters, Melati and Isabel Wijsen, to start an organization, Bye Bye Plastic Bags, to help other youth force similar bans in their own countries.

While these steps address just a tiny piece of this enormous menace, they are still important.

The Ithaca, New York-based organization Shopping Bag Action Group (SBAG) pushed for a plastic bag ban in Tompkins County in the late 2000s and early ’10s. SBAG held public educational seminars at community events such as the Ithaca Compost Fair. The group did not stage rallies or protests, counting on gentle persuasion to spur corrective action.

“I think [our efforts were] most effective at educating both the legislature and the public on the necessity of a bag ban and reduction of plastic use in general,” recalls SBAG founder Thomas Shelley.

The group disbanded when they were told that state legislators were drafting a statewide ban on plastic bags.

Iris Marie Bloom is the executive director of Protecting Our Waters, a Philadelphia-based nonprofit organization that aims to stop gas drilling and other similar projects in Pennsylvania and surrounding regions. Bloom has worked within many towns and counties to pass legislation to eradicate plastic usage. In Marbletown, New York, she was able to get the town legislature to pass several resolutions like plastic straw and bag bans.

“First [we started] with Skip the Straw in Marbletown and New Paltz, and then Woodstock,” says Bloom, “[which] then influenced the Ulster county legislature to do a Skip the Straw law. Then we expanded to cutlery and condiment packets, [which is] as far as we could get in Ulster county.”

These bans have not been enforced since the beginning of the pandemic, much to Bloom’s chagrin.

Through all of Bloom’s work with local and countywide bans, she said she has found that the first ban is always the most difficult. “It’s hard to be the first town in an area to pass [a plastic ban], and it’s hard to be the first county in a state to have that kind of policy,” Bloom says. Of course, as she adds, “statewide and nationwide legislation is by far the most important thing.”

Bloom compares the process of getting bans passed to a game of dominoes. “The sequence,” she explains, “is often that you work on the town resolution first, and then you get another town and another, and then you get the county. The county is a strong influence on the state … and then the towns, counties, and states together influence the national legislature, which [as we know] hasn’t passed yet.”

McCann used a plastic bag ban passed in nearby Park City as a basis for her proposed ban and received very little resistance from the community or city council.

Before the Moab City ban was passed, McCann and the city’s leaders received a letter from the American Recyclable Plastic Bag Alliance, an industry organization that challenges plastic bag bans across the United States. The letter, written in typical corporate-legal doublespeak, argued that plastic bags have less environmental impact than reusable bags, that banning plastic bags would not reduce litter, and that bans and taxes would adversely affect low-income families. 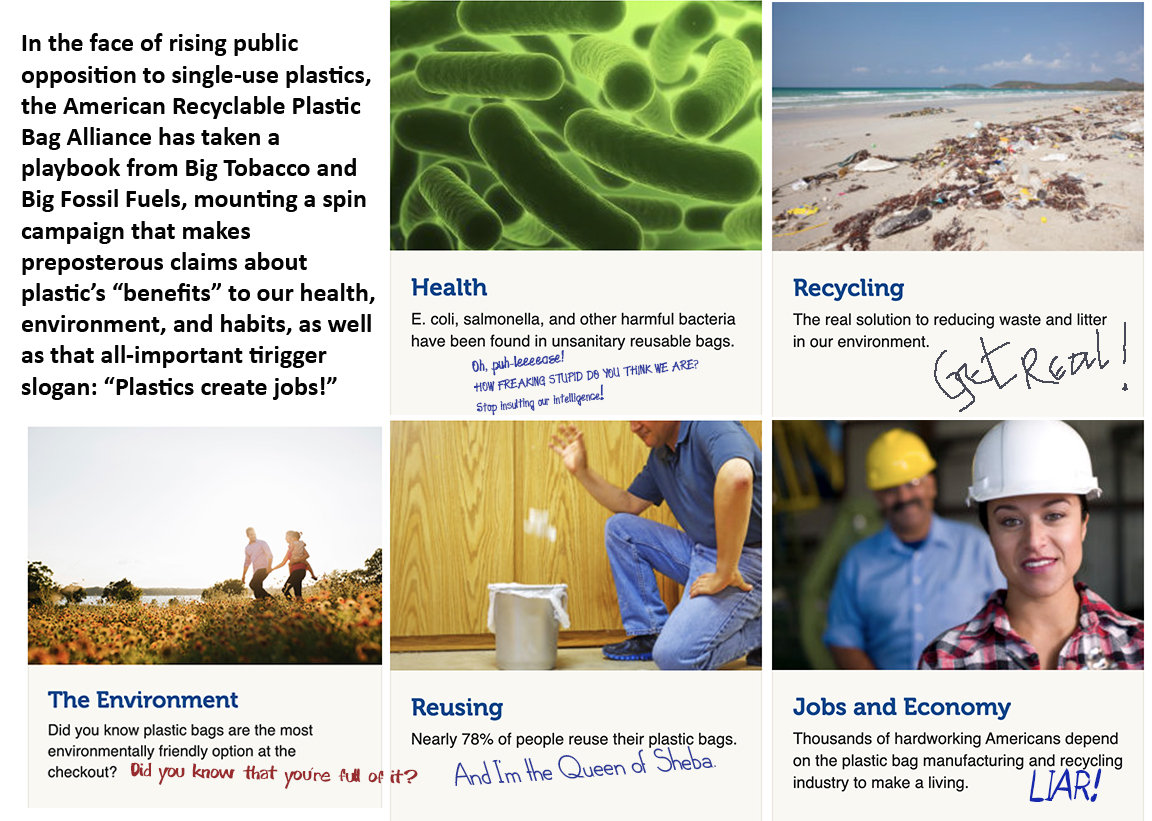 In fact, however, any adverse impact on low-income families would be virtually nonexistent, as reusable bags are a one-time purchase that last months or years, while offsetting the environmental impact of reusable bag production and eliminating plastic bag litter — and the breakdown over time of those bags into microplastics, which go virtually everywhere.

Since early 2020 Covid-19 has demolished years of effort, says McCann.

“Some businesses were discouraging people from bringing their own bags for fear of spreading [the virus], even though there’s no valid research that’s linking viral spread to a reusable bag,” she points out. “That has [brought] an unfortunate slowdown in the behavioral shift that’s needed.  [I hope that] now we can get back to people bringing reusable bags again.”