Old Harbor, formerly Nuniaq, is the largest of six Alutiiq villages in Alaska’s Kodiak archipelago. People have lived here nearly 8,000 years, making it one of the oldest continuously occupied areas in the region. 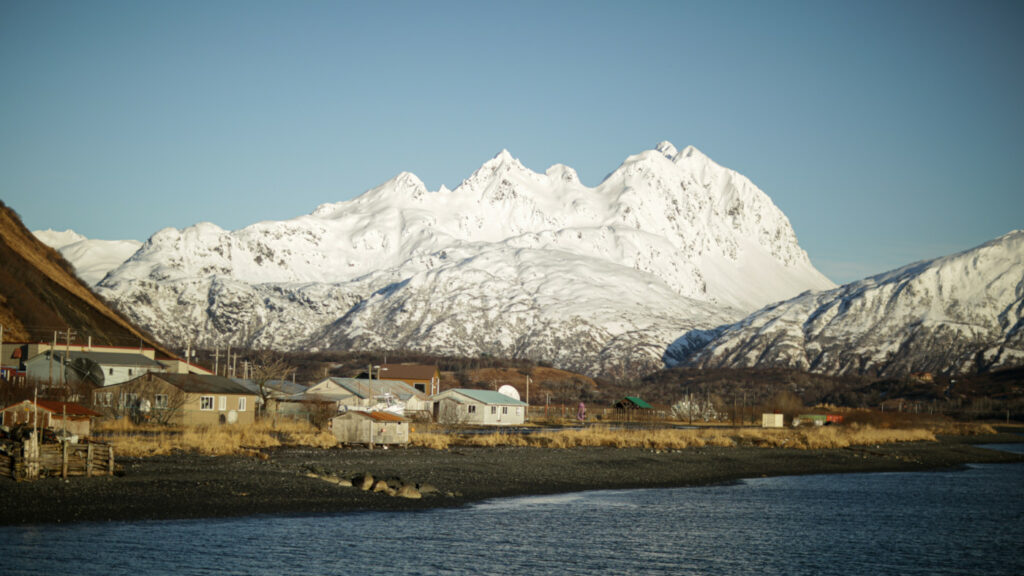 Looking to its future, Old Harbor finds itself at a crossroads. While its long history of commercial fishing and industrial maritime activities such as whaling are now a fading way of life, the village has developed a strategic plan that combines the efforts of the city, the tribe and the corporation of Old Harbor to develop future-focused projects that benefit the community’s long-term growth and survival. This includes an alternative to their modern reliance on importing food at a now historically high expense from the town of Kodiak or the mainland. 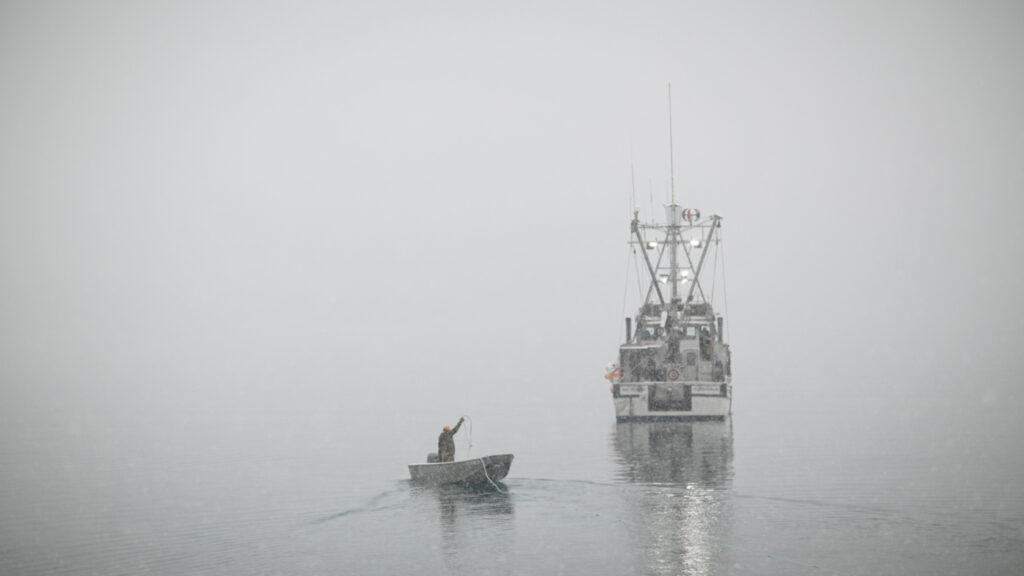 With that in mind, in 2015 the residents of Old Harbor decided to release and manage a free-ranging herd of plains bison on the 120-square-mile Sitkalidak Island, located a short boat or helicopter ride across the water from the village. The private herd, acquired and relocated to the island in 2017, belongs to a community nonprofit, the Old Harbor Alliance, with support and representation by the Alutiiq Tribe of Old Harbor, the city of Old Harbor and the Old Harbor Native Corporation. The herd will provide a locally available high-quality protein, as well as economic opportunity through tourism, hunting tags, local guiding and logistics services, and the sale of excess meat. 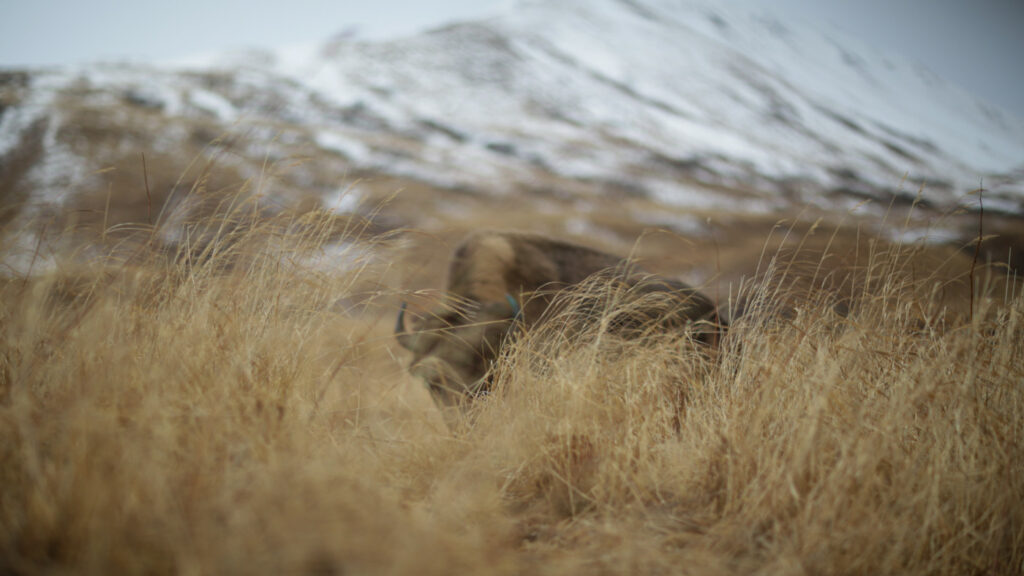 Decades of collaboration made this possible. In 2016 Old Harbor became a member of the InterTribal Buffalo Council, an organization of about 70 tribes across North America that has spent the past 30 years proliferating and growing bison populations on Indigenous lands. The council facilitates programs and resources to help educate tribes and the general public on the traditional benefits and relationships between communities and bison and provides assistance to help tribes start their own herds. The ITBC also partnered with the Wildlife Conservation Society, the organization I work with, in successfully advocating for bison as the national mammal of the United States. 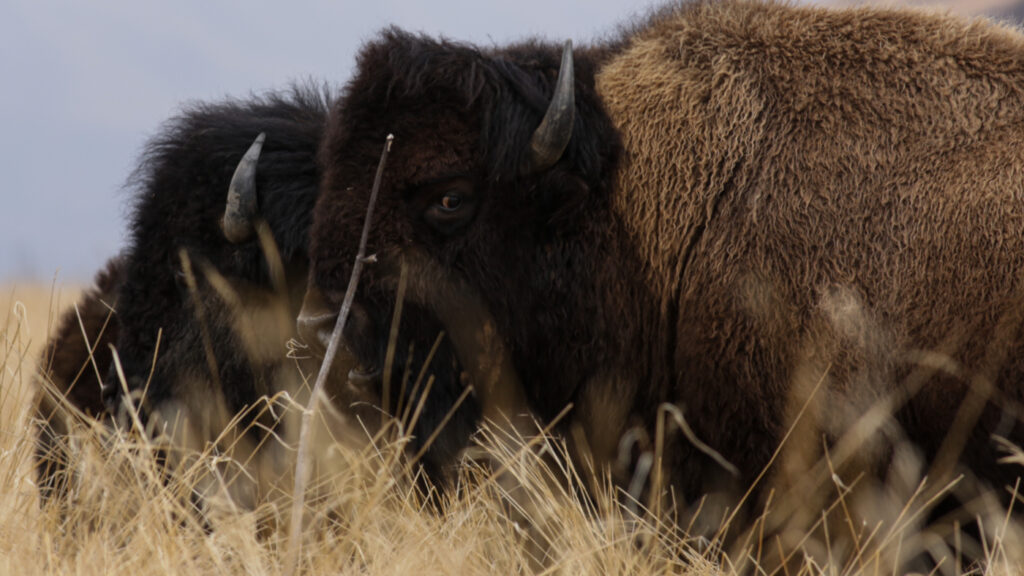 The ITBC effort includes a program to rescue bison that leave the boundaries of Yellowstone National Park. Yellowstone bison are the closest known relatives of plains bison that survived their near extinction in the 19th century. Bison leaving the park can be killed by locals through a Montana state effort to prevent contact between bison and livestock. The ITBC has been working to save every bison that stumbles past the park borders, and in 2020 sent three such pure-blooded bulls to Old Harbor. The bulls, in turn, will provide the herd with genetic material to avoid interbreeding issues and produce a healthy generation for over a century.

I’ve spent the past several months in Old Harbor filming a documentary around the bison herd, giving me the opportunity to see its importance up close. 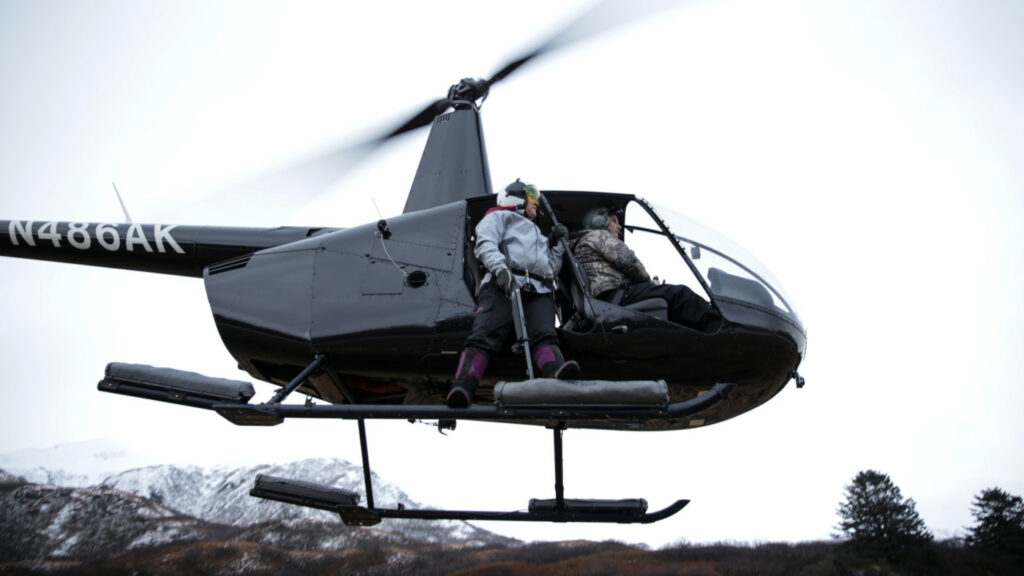 Cold rain blows the morning I hop a ride in a helicopter headed toward Port Hobron on Sitkalidak Island. I’m joined by Nate Svoboda, a biologist with the Alaska Department of Fish and Game, and Melissa Berns, chief manager of Old Harbor’s herd. We’re going to run physical exams on several bison, adjust tracking collars and apply what’s called a “cold brand” on the bison from Yellowstone to denote them from the rest of the herd.

As we fly over Sitkalidak, Berns stands on the landing skid, safety-hooked at the waist in a space where the door would normally be, a black tranquilizer rifle in her hands. She sees a small herd of bison, waits until they’re in range, and aims. “Dart is in,” she says over the intercom, and after five minutes of waiting says “Bison down. Bison down.” The helicopter lands and the team gets to work. 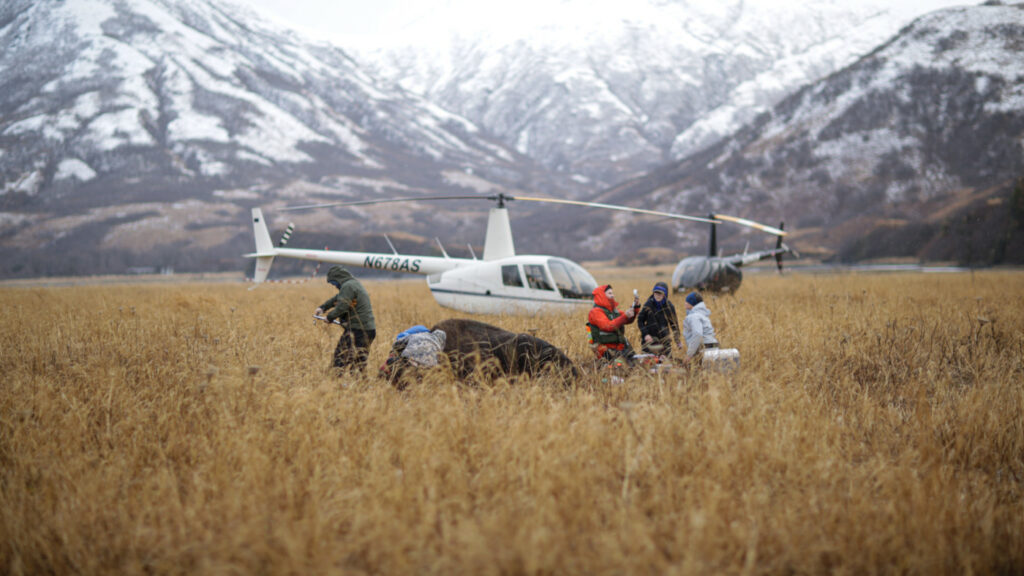 At day’s end we visit our fourth bison. Community volunteers exit two helicopters and approach the sleeping hulk of Siduuq, one of the three Yellowstone bison bulls we’d been searching for. By reputation and appearance, Siduuq is exactly how I imagined a “buffalo” — powerful, ancient, mysterious.

Keller, the pilot, collects blood samples while Dahlia, Berns’ 17-year-old niece, takes the bison’s temperature. His large tracking collar is adjusted to ensure it’s secure, and he breaths deeply from the oxygen tube inserted in his nostril. The workup is finished in about 30 minutes, then Svoboda administers a stimulant to reverse the tranquilizer. 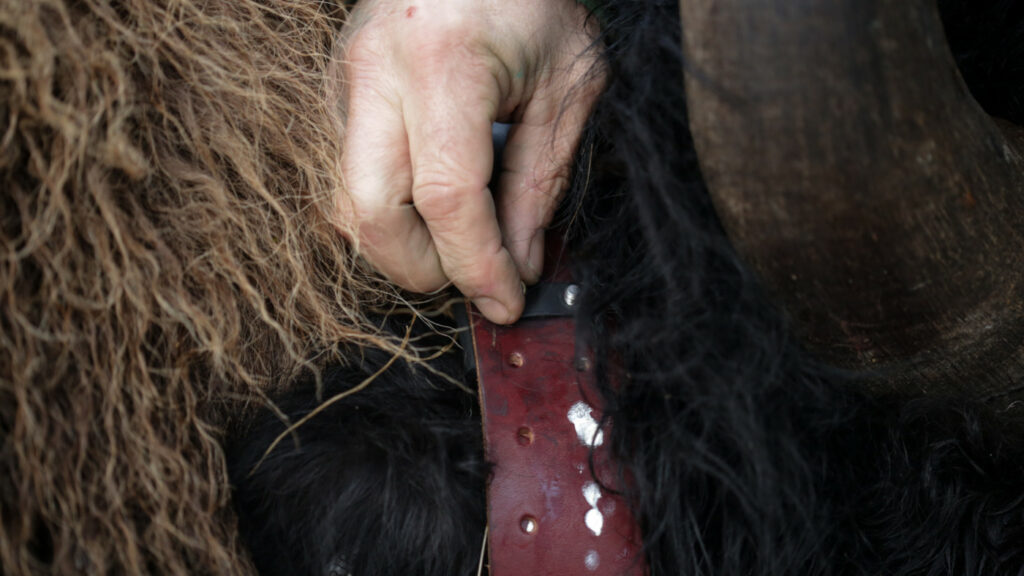 A stir in the ears signal Siduuq’s waking. As he rises, I take several photos. I’ve done this throughout the day, about 20-30 feet distant. While the other bison quickly run off, Siduuq continues staring, the whole of his great face turned in my direction.

Everything feels quiet now. Bison will raise their tail if they feel threatened, but Siduuq’s is down, his body still. I stare into those giant eyes and feel as if I’m being appraised by an old wisdom. Then, as silent as his weighted gaze, he starts to walk away — not breaking eye contact until well on the other side of the clearing. 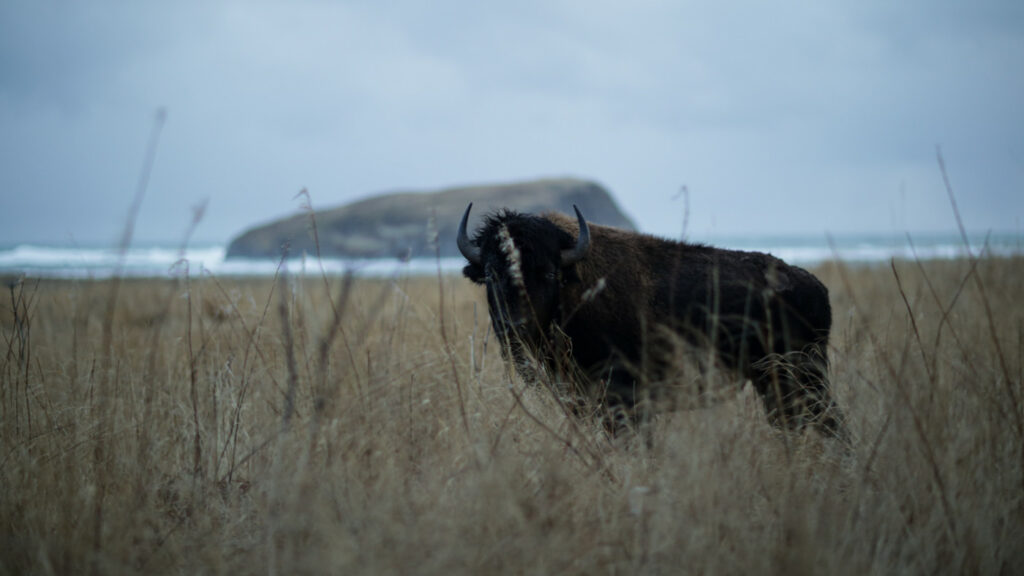 As we leave the bison and Sitkalidak Island behind, the view from the helicopter frames the remains of an old whaling station from the 1930s. The pilot circles it to give us a better look. A few old shacks, some long-rusted machinery and an old shipwreck sit idly in the rain. I contemplate the changing approaches to ephemeral industries and survival that have occurred in and around Old Harbor through the centuries. Piles of rusty drums, full of old fuel and whale oil, reflect a time long gone for the small fishing village. Now perhaps a new self-determined vision and species — bison — will guide its future. 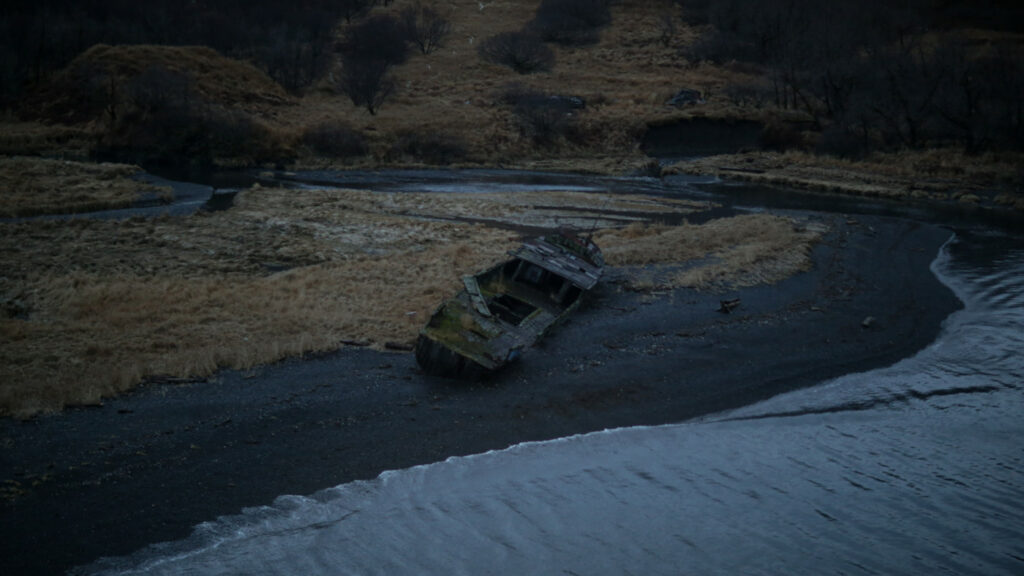 We cross the strait and Old Harbor alights in the darkness, windows bright with warmth and welcome. Berns and Svoboda, though exhausted from the day, talk excitedly at length of the next trip out. I contemplate how the bison found their way here — from Kodiak, from Yellowstone, via tribal networks — from the brink of extinction to grow in another place, where they’re once again stewarded by an Indigenous tribe. 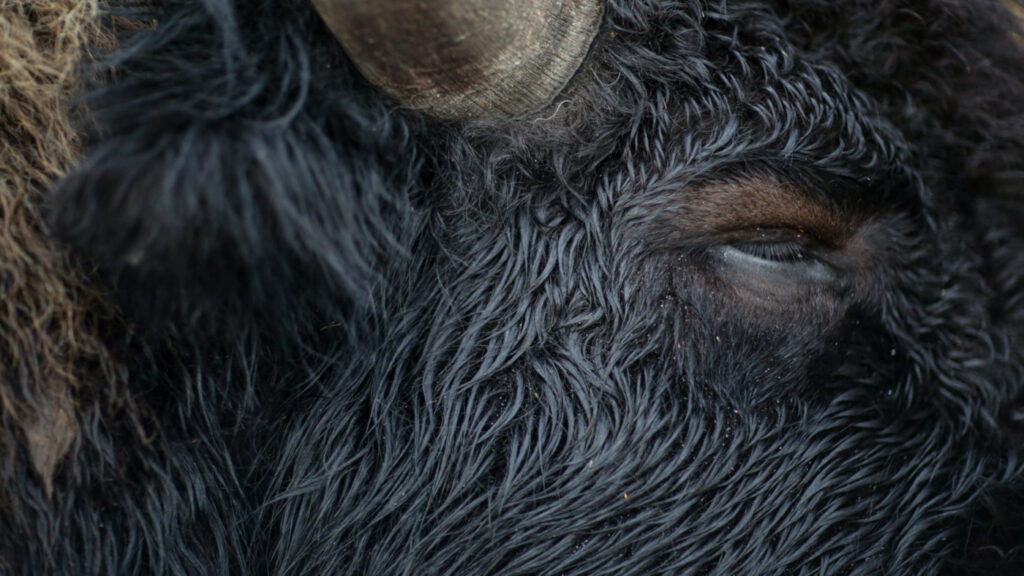