Miller Dussán is one of those rare people who can just as comfortably traverse the traditional fishing villages and small farms of the countryside as he can the halls of research and policy-making institutions. In Colombia, a dynamic, water-rich country that is highly dependent on increasingly controversial hydropower, Dussán plays a vital role in these two spaces.

In parts of the countryside, local communities have been deeply impacted by the unceasing development of mega-dams. Dussán and his colleagues have been busy researching the direct and indirect effects of these dams, while leading a resistance to Colombia’s misguided commitment to mega-dam projects.

A professor at the South Colombian University in his home department of Huila, Colombia, Dussán has focused much of his academic work and personal time on the widespread socio-ecological harms caused by the recently constructed El Quimbo mega-dam. As part of this effort, he founded Asoquimbo, a local organization that gives a coherent voice of resistance to those negatively impacted by El Quimbo. Dussán also serves as a leader within the Colombia Rios Vivos (Living Rivers) Movement, which has resisted other mega-dam projects around the country, such as the much-maligned Hidroituango project in the Antioquia department and Hidrosogamoso in the Santander department.

Since its inception in 2008, El Quimbo has been met with pronounced local resistance, including from fishermen downstream. Photo by Daniel Henryk Rasolt.

Since its inception in 2008, El Quimbo has been met with pronounced local resistance (in fact, a proposed dam at the same site had already been rejected in 1997 over social and environmental concerns). While much direct ecological damage to the Upper Magdalena River and its migratory fish species was already done by Betania dam, which began operations in 1987 with no environmental licensing and whose reservoir is just 12 kilometers downstream from El Quimbo, the impunity with which El Quimbo was built and continues to be operated by powerful Italo-Colombian multinational ENEL-EMGESA has sparked outrage.

“serves as part of the foundation of a national agroindustrial and extractivist model, providing power to disruptive local and downstream oil and mining operations, which is soon to include fracking,” says Dussán. “It is all connected.”

When El Quimbo was constructed, its reservoir flooded 80 square kilometers of forest and fertile agricultural land, displaced around 450 families, and killed the livelihoods of fishermen downstream. Ecological disruptions continued to build after the dam was complete. Research has shown that El Quimbo has further altered sediment and nutrient flow, water levels, fish migration, temperature and oxygen levels, and overall water quality downstream and within its tilapia-invaded reservoir.

“ANLA [The National Authority for Environmental Licensing] and ENEL-EMGESA remain largely unaccountable for the widespread damage that they have caused,” says Dussán, who wrote a book entitled El Quimbo: Extractivism, Dispossession, Ecocide and Resistance. “We at Asoquimbo continue to fight for reparations for the thousands of impacted farmers and fishermen in Huila, Colombia.”

The ongoing fight against overt violations of local communities’ rights and disregard for social and environmental impact assessments has helped to raise public consciousness about the issue of mega-dams. It has also established certain legal protocols and precedents for prior consultations with and reparations for impacted communities, and sparked resistance to other mega-projects proposed around the country.

“One of our greatest accomplishments in the resistance to El Quimbo is the raised awareness to the damage of mega-projects and the extractivist model that is tearing our country apart,” says Dussán.

Another destructive mega-dam, Hidrosogamoso is a 190-meter-high, 820-megawatt behemoth along the Sogamoso River that started operating in 2014. The Sogamoso River has its headwaters at the confluence of the Suarez and Chicamocha Rivers, and is also fed by the Chucuri River just upstream from the dam, though Hidrosogamoso’s massive 70-square-kilometer reservoir has severely altered this dynamic confluence. These are all heavily sedimented rivers that originate in the Andean highlands.

In response to the dam, Dussán helped local leadership unify and organize under Rios Vivos, and has helped to guide and consult in their resistance ever since.

“The Sogamoso River is one of the Magdalena River Basin’s [MRB] most sediment-rich tributaries, and its damming has caused both local and basin-scale impacts,” explains Luz Fernanda Jimenez-Segura, a biologist at the University of Antioquia focused on tropical freshwater fish. “The sediment-trapping impacts riverine habitats and wetlands downstream, while changes in water quality, altered flow regimes and fragmentation modify reproduction cues [which are synchronized with water levels in the MRB] and migration routes of several fish species.”

One emblematic migratory fish species of the MRB, the Prochilodus magdalenae, known as the bocachico, travels upwards of 1,200 kilometers round-trip to the upstream Andean mountains and back to the calm waters of downstream flood-plains and marshes known as “ciénagas.” The bocachico has precipitously dropped in numbers throughout the MRB due to a range of interconnected agro-industrial factors, including dams, but it has become particularly scarce within the Sogamoso River since Hidrosogamoso was constructed. 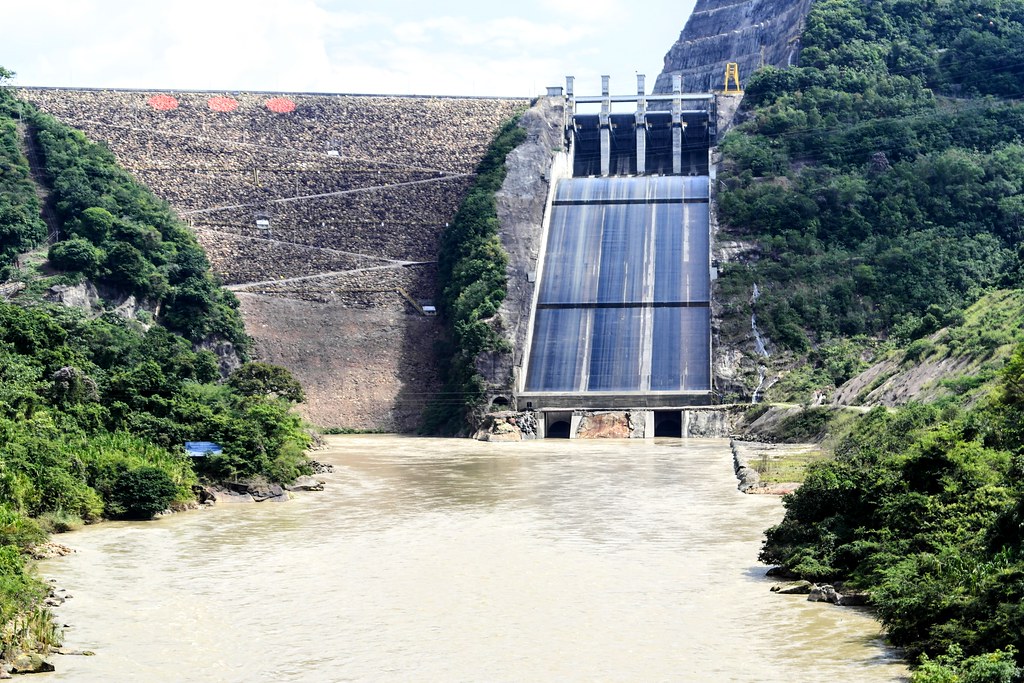 Hidrosogamoso is a 190-meter-high, 820-megawatt behemoth along the Sogamoso River that started operating in 2014. Photo by Daniel Henryk Rasolt. 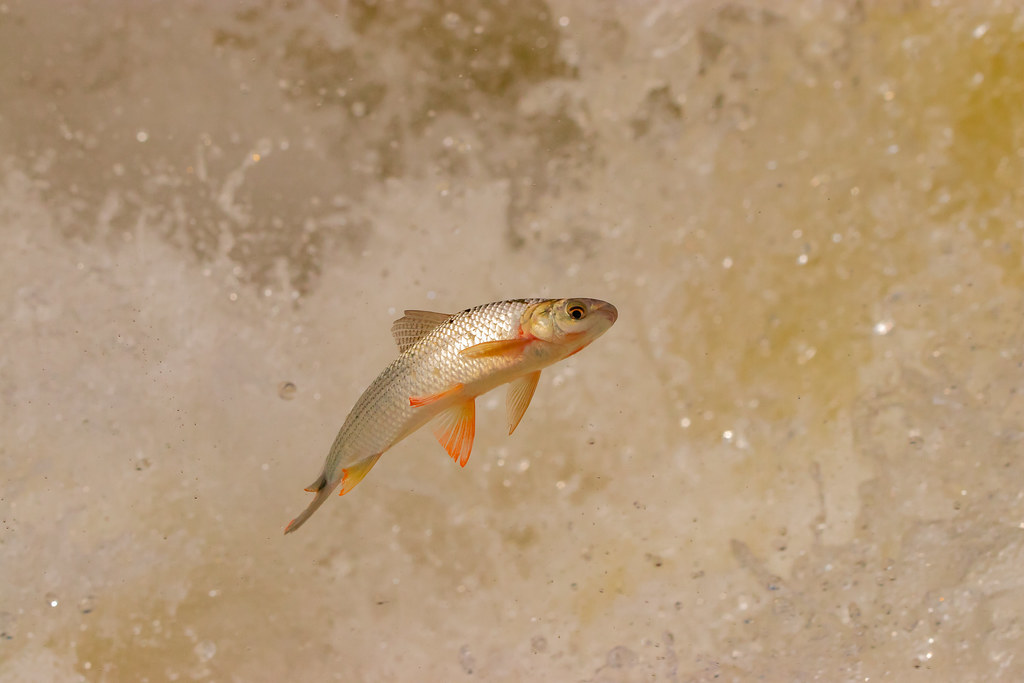 The migratory bocachico has become particularly scarce within the Sogamoso River since Hidrosogamoso was constructed. Photo by Jorge Garcia-Melo as part of his CavFish project.

“The El Llanito ciénaga, which is directly fed by the Sogamoso River and traditionally is an important habitat for the bocachico, has seen its vital seasonal flood pulse drastically altered by Hidrosogamoso, changing the dynamics of the entire ecosystem,” lamented Dr. Silvia López-Casas, a freshwater ecologist focused on migratory fish, and a colleague of Dr. Jimenez-Segura.

“Bocachico, catfish, and many other fish were abundant here just ten years ago before they started constructing ‘The Monster,’” says one local leader from the fishing village of La Playa, just downstream from Hidrosogamoso, who has not been identified due to security concerns. “We had good lives and healthy diets, and tourists would come here to enjoy and fish. Now, as you can see, we have nothing. We were promised employment by ISAGEN [the Colombian-owned dam proprietor], but all we got was an empty river and violent threats for our protest.”

As in so much of Colombia, social and environmental leaders who have spoken up about the injustices of El Quimbo and Hidrosogamoso have been threatened, harassed, and some even killed.

The impacts from El Quimbo (combined with those from Betania) and Hidrosogamoso are not only felt by local communities and surrounding ecosystems. Basin-scale research has been uncovering the large-scale impacts of these and other dams throughout the MRB, with a focus on hydrological connectivity, hydrological variability, and large-scale processes like fish migration and sediment transport.

Hector Angarita, an environmental and water systems scientist currently working at the Stockholm Environment Institute, and the lead author of an influential 2018 basin-scale study, recently explained to me how these dams can cause “nonlinear cumulative impacts.”

On the mainstem of the mighty Magdalena River,

“The cumulative impacts of Betania and El Quimbo, for example to the Magdalena’s flow regimes, can be felt hundreds of kilometers downstream, which alters the functionality of the aquatic habitat for migratory fish species,” says Angarita. “Hidrosogomoso also substantially changes the natural patterns of water in the Sogamoso River, even releasing large amounts of water in the seasons when there should not be water. This impacts the biodiverse flood-plain habitats of the Middle Magdalena [such as ciénaga El Llanito] that depend on connectivity and seasonal hydrological variability.”

Similar trends have been observed for cumulative sediment entrapment in reservoirs.

“Downstream of Betania, the loss of sediment is around 80 percent due to the cumulative sediment trapping of Betania and El Quimbo,” says Angarita.

In Colombia there has not been centralized consideration of basin-scale and cumulative impacts. Impact assessments, when conducted, have historically concentrated only on local and direct impacts. Thanks to the contributions of Angarita and his colleagues, that has changed.

“What we created was a framework that allowed for including criteria for basin level impacts, especially the nonlinear cumulative impacts,” says Angarita.

Basin-scale frameworks have now been integrated into environmental licensing models, with the intention of better informing regional planning. In the past few years, certain proposed projects and even some licenses that likely would have been given the go-ahead just 10 years ago, have been denied due to their projected basin-scale impacts.

Colombia is still very much following an ecologically unsound extractavist model, and hydropower will likely remain the principal energy source for the country for the foreseeable future. But the non-linear combined efforts of professor-activists like Dussán and integrated systems researchers like Angarita are helping to shift the tide against mega-dams in Colombia, paving the way for a more just and sustainable energy transition.