Interest is mushrooming in the power of fungi to feed and heal people and the planet. On one urban farm in Bristol, England, mushrooms upcycled from wood chip are building topsoil as well as feeding the local eaters. Meanwhile another nearby mushroom growing initiative is giving wealthy landowners an incentive to preserve their woodland. Ursula Billington reports.

Fungi were only granted Kingdom of Life status in the 1960’s, yet they possess a wealth of unique qualities and a dramatic potential to shape our lives. Their powers range from health-giving and medicinal properties to soil remediation, toxic waste clean-up and sustainable food solutions. Mushroom leather is even being employed in the production of vegan shoes.

As well as these practical applications, fungi provide a shining example of effective reciprocal relationships with other life in the surrounding environment.

Fungi’s root-like tendrils, the mycelial networks covering vast distances underground, support and sustain nearly all living systems – dating back 500m years to the first ancestors of plants which, as freshwater algae, landed on the marshy shores of rivers and took root in the fungi found there.

These foraged for water and nutrients for their new algal partners; the algae reciprocated with energy-containing carbon compounds obtained by photosynthesis. A relational way of being developed between the organic life forms. 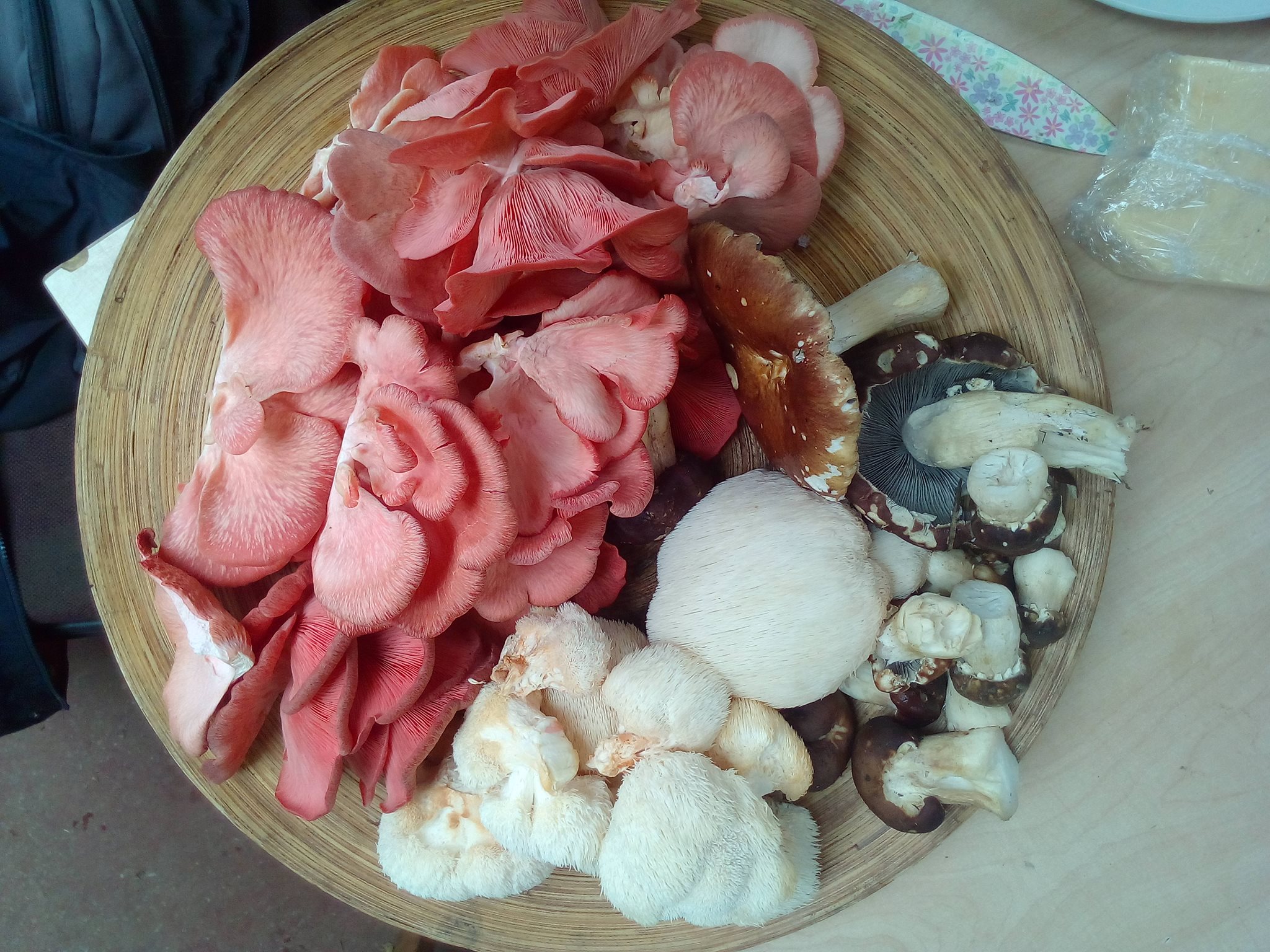 Upcycled Mushrooms, the brainchild of Patrick Mallery, brought edible mushroom cultivation – along with its many life-sustaining benefits – to the site.

The wine cap, ‘garden giant’ or ‘godzilla mushroom’, is a secondary decomposer that thrives on leftover wood: brash, small branches and pulp. This favoured food source can be easily replicated with a wood-chipper, and the city is heaving with tree surgeons.

“It’s an amazing mushroom – next level!” beams Patrick. Twenty-five centimetres of woodchip became 5 cm of chip and 2.5 cm of topsoil within one growing season, plus a crop of fresh mushrooms ready for the local market. 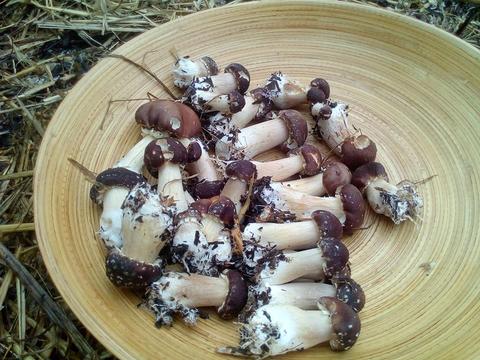 Food production reaped the benefits too: lacing the woodchip mulch around fruit bushes with wine caps resulted in faster growth and bigger bushes as the mushrooms rapidly processed the chip back into nutrients; greater foliage then provided the perfect shady canopy for the mushroom to fruit underneath – a premier example of companion planting in a mutually-beneficial fungus-plant relationship.

Patrick suggests there are significant implications for larger scale agriculture: “There’s nothing to stop it being done, using tractors and big chippers. It would be interesting to incorporate as part of a largescale rotation, similar to lays where the ground is covered for 3-4 years and cattle graze on it to rebuild the nutrient base. Wine caps could be used to restore topsoil before returning the land to arable.” 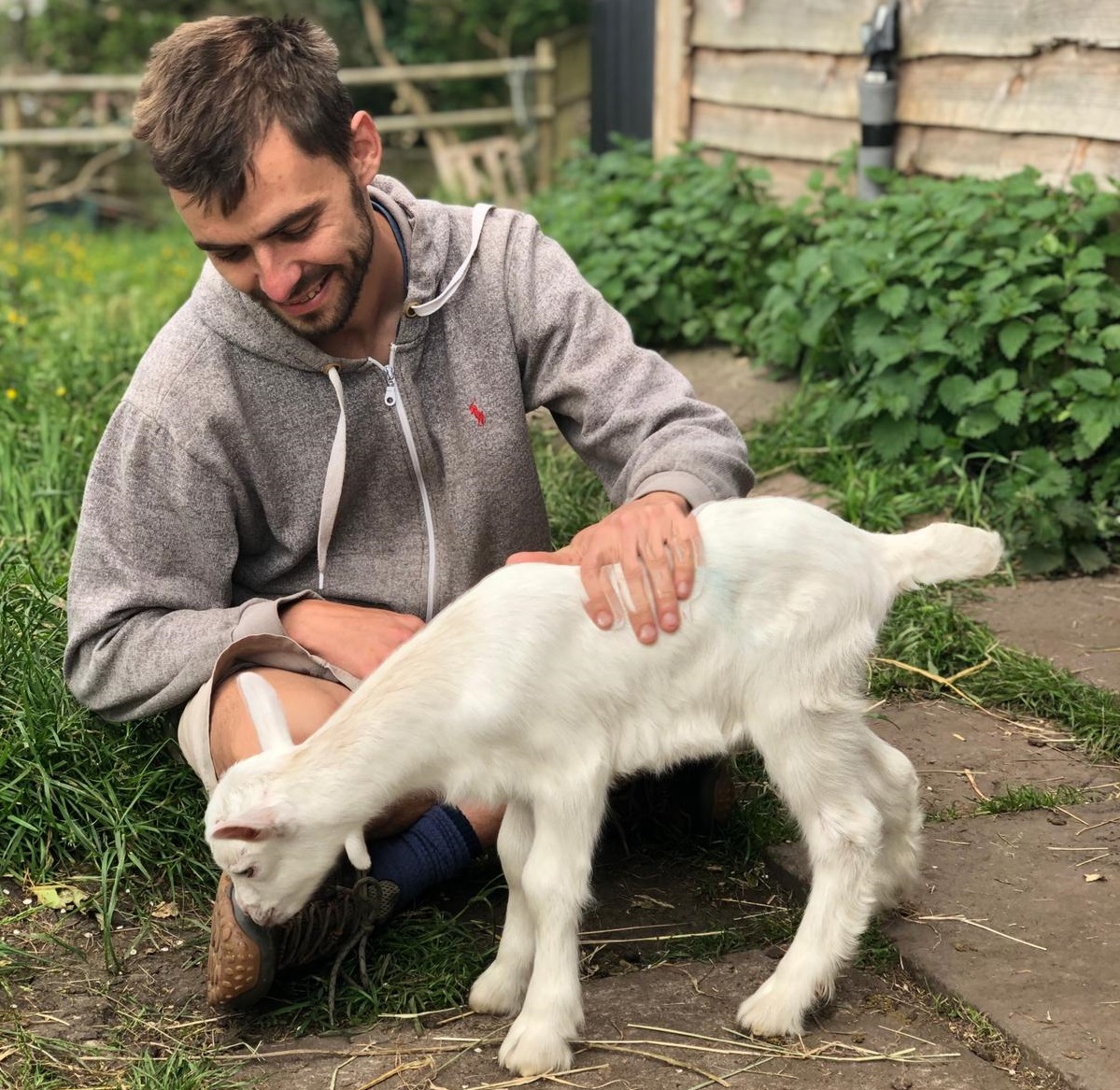 There’s also growing evidence that mushrooms can provide support for pollinators: bees have been seen eating wine cap mycelium in what is presumed to be a preventative health measure. Studies in the US suggest that adding a reishi mushroom tincture to sugar syrup improves bees’ immune system, significantly reducing virus levels.

It’s an emerging field and Patrick is cautiously optimistic, suggesting the complexity of nature is a challenge to identifying specific medicinal sources, but also a positive in and of itself.

“The relationships are so site-specific: for example, maybe they also need particular wildflowers in place [to benefit from specific mushrooms],” he notes.

“But any increase in diversity is always going to be a benefit,” Patrick adds. “Food growing areas are usually non-diverse as we try to manage them into efficient productivity machines; any way we can add complexity will almost certainly benefit the wider environment.”

Mushroom foraging in the woods. Image courtesy of 42 Acres

Patrick is also involved in an exciting project in England’s South West to establish a woodland-based shiitake growing enterprise on the site of 42 Acres, a retreat centre and regenerative organic farm. The area is semi-rural, surrounded by rich woods and agriculture.

The operation intends to demonstrate to the many surrounding wealthy landowners that woodlands can generate an income whilst, as as Patrick notes, highlighting “the ecological benefits of keeping them as woodlands.”

“There are loads of farms that own giant tracts of woods that they deem unproductive,” explains Patrick. “My aim is to turn them into something that creates money so they can be kept as woodland, rather than the owners chopping them down for profit.”

Although 42 Acres are keen to return their conifer plantations back to native broadleaf, Patrick is concerned about killing host trees and thus losing a “whole heap of fungi” that have taken decades to build up. Image courtesy of 42 Acres

He’s had to navigate challenges along the way: whilst 42 Acres are keen to quickly return the conifer plantation part of their 45-acre woodland back to native broadleaf, Patrick is concerned for

“the whole heap of fungi associated with this conifer. If they kill the host trees and with them the mycorrhizal species, we lose a plethora of fungi that’s spent 20-30 years building up to the point of producing fruiting bodies.”

Patrick has suggested a more gradual approach: taking out some trees, maybe one in every four, keeping the wider ecology in mind; hoping mycelial networks will remain intact and reassociate with the new saplings. 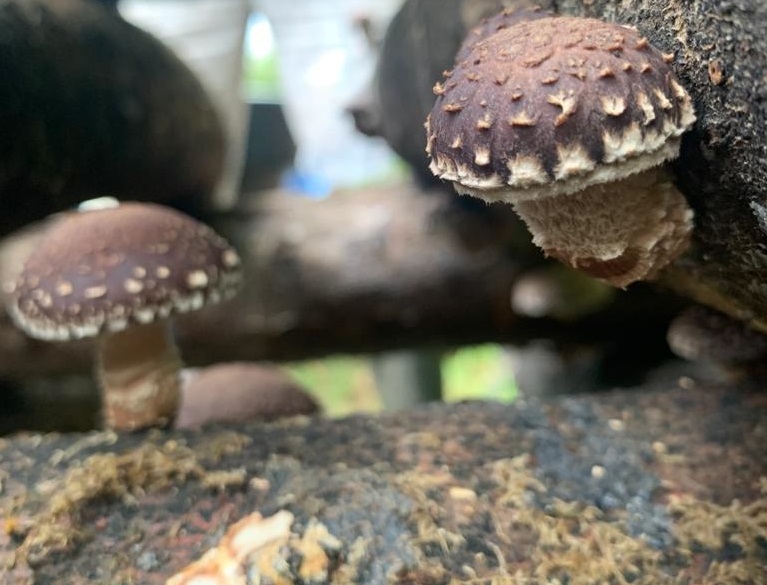 For this particular cultivation operation, Patrick obtained a shiitake culture from a supplier – as a non-native species he can’t clone from the wild, as he often would – choosing one with the right characteristics to thrive outdoors.

He uses local wood, typically a beech that needs felling, impregnating the logs with a special drill bit and tool for stamping culture into the holes, then sealing them up against contaminants with wax.

After 12-18 months the logs are shocked, in a bath of cold water, into producing fruiting bodies. They typically fruit for 3-4 years, twice in spring and once or twice in autumn, weather-depending. 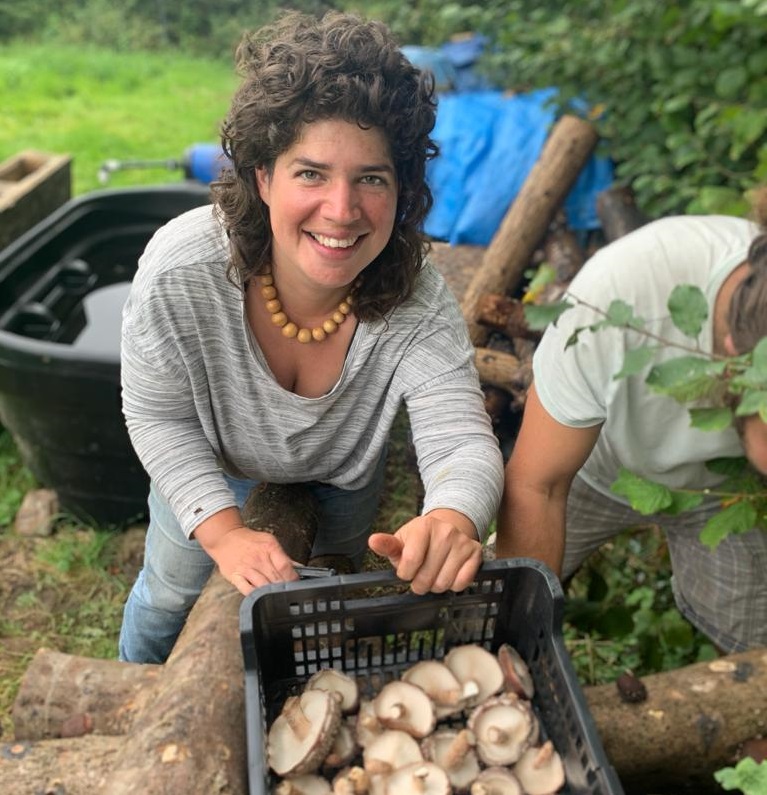 “People are still waking up to the power of mushrooms,” says Tasha, pictured here with her harvest. Image courtesy of 42 Acres

“Our outdoor mushroom farm is a form of biomimicry,” says Tasha Elena Stevens, the retreat’s resident mushroom expert. “We’re copying the natural process – we harness the intelligence in the form of the mushroom, whereby they act as alchemist and turn the tree and sunlight into food, medicine and nutrients.”

Tasha expands on the operation at 42 Acres: “We’re growing our own native medicinal and edible strains found on-site, as well as the shiitakes. It’s a much slower, more sustainable process than growing indoors. We work with respect for and in collaboration with nature.” 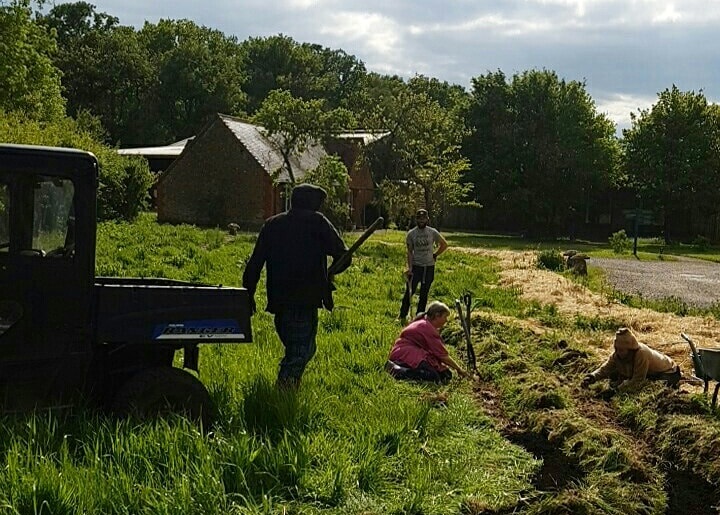 Working the land at 42 Acres. “We work with respect for and in collaboration with nature,” says Tasha. Image courtesy of 42 Acres

The beauty lies in the natural feedback into the local ecosystem. Patrick primarily works with decomposers which turn wood back into soil and nutrients. Primary decomposers such as shiitake grow directly on logs or dense wood in the wild; the woody pulp they leave after feeding is then consumed by secondary decomposers.

The cultivation system’s in-built recycling process takes a log and slowly turns it back into soil via a series of different fungi; the nutrients contribute directly to the health of the forest floor, surrounding plants and trees. 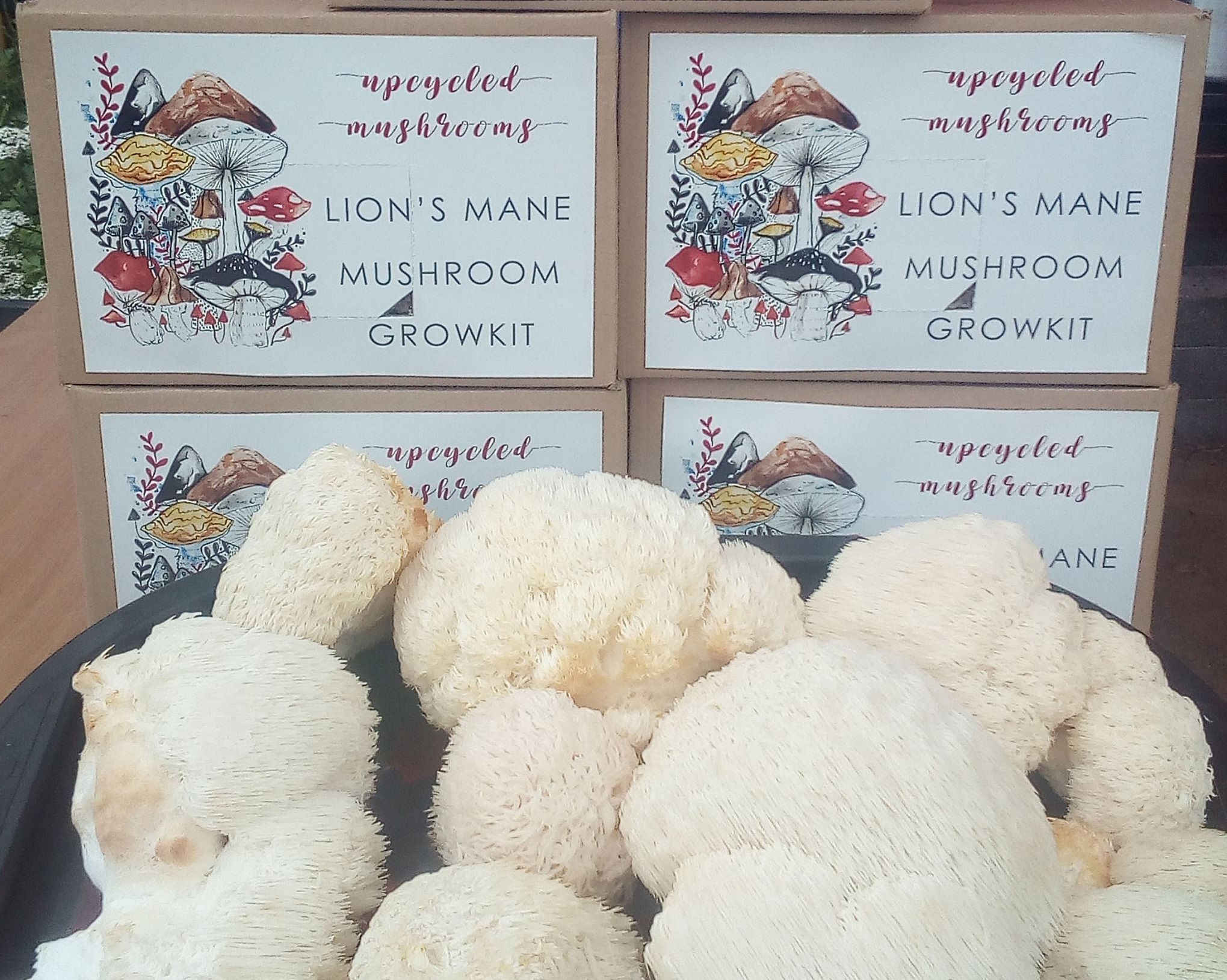 Grow your own: Patrick wants to give people the power to take control of their food. Pictured: Lion’s Mane DIY kit and the resulting fruit. Image courtesy of Patrick Mallery

As well as cultivation, Patrick’s passion lies in sharing the joy and benefits of mushrooms – and food production – as widely as possible.

Following the success of cultivation for the local food market, Patrick has diversified into production of grow-your-own mushroom kits, teaching and agroecology consultancy around the world, from Scotland to France to Kenya.

His DIY growing kits are designed to remove the challenging technical elements so that even the greenest of beginners can experience the thrill of their own homegrown mushroom.

And, in the spirit of interconnectedness, it doesn’t stop there:

“The idea spreads beyond fungi. It’s food, and by proxy the environment, as a wider thing – pulling all the pieces together,” says Patrick.

“I want to give people the power to take control of their food. It’s one of the few things we can do that’s quite revolutionary,” he continues. “To see radical, systemic change we need to start taking ownership of those basic things – food, water, shelter, energy.”

“Even inspiring people to ask questions around whether it’s possible to grow their own food… Everyone starts from somewhere,” acknowledges Patrick. “There are a lot of people that think it’s overwhelming, so if I can take all the technicalities out and inspire them with the first taste of their own Lion’s Mane – that’s what I want to do. My teaching is very much trying to push that idea forwards.”

You can visit Patrick Mallery’s mushroom growing enterprise at upcycledmushrooms.co.uk