On any day in Appalachia, you can find gifts in front of houses, left on porches for the people inside: mushrooms just foraged, cookies freshly baked. The porch is an extension of the home in Appalachia—not only a gathering spot for conversation, but a traditional sharing place. If you want to exchange tools, plants, or hand-me-downs with your neighbor: you put them on the porch. In times of struggle, porches are the vessel to deliver food: frozen meals to new parents, casseroles for grieving families.

Now, because of COVID-19, those practices are becoming more important than ever. It’s not homemade food appearing on neighbor’s porches so much as home-sewn masks, or bags of groceries at the homes of senior citizens. And while school buses are no longer shuttling children to and from schools in the region, the buses are certainly not parked and empty.

More than half of all children in Appalachian Ohio receive free or reduced-price lunch, as reported by the Ohio PTA in 2013. At some elementary schools, the participation rate is almost 75%. In many cases, food distributed to Appalachian children at school feeds a family; thanks to programs such as Blessings in a Backpack, some children go home for the weekends with backpacks of shelf-stable food like canned tuna and peanut butter, designed to help out the whole household.

School bus routes were already established, and the drivers known to families, so it was a natural step that a familiar person could deliver meals to children. In the Appalachian county of Athens, Ohio, in an email to parents, the school asked families to call if they needed food, and meals would be provided by bus drivers, whether or not children had previously been enrolled in free lunch programs.

How are those children—and their families—getting food during the pandemic? Throughout the region, it’s from their school bus drivers. 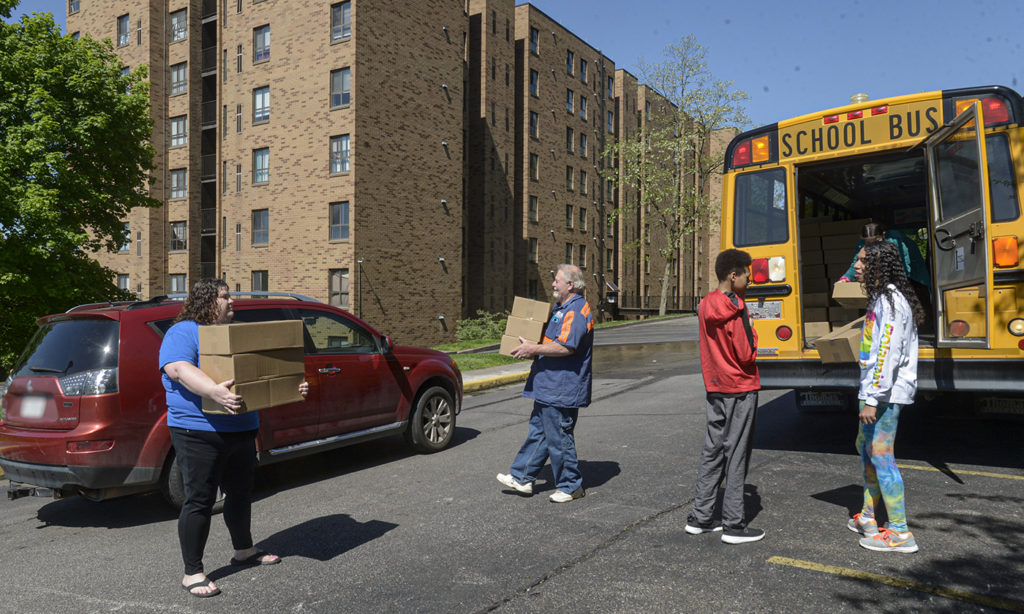 In West Virginia’s Kanawha County, school bus drivers are leaving meals on porches. Every Monday, drivers drop off enough breakfasts and lunches to last a week. If children are sheltering at places other than at home during the pandemic, families have been asked to call the bus terminal, because the school district tries to reach as many people as possible.

By the first week of April, Kanawha County Schools was providing more than 12,500 meals, with food “delivered to every bus stop along our normal routes,” said district communications director Briana Warner. “Our school bus drivers have stepped up and are our heroes.”

One of those heroes is Rod Stapler, who has driven for the school district for 10 years. “The way we figure it,” Stapler said, “if we go through the end of April, we’ll deliver almost a million meals.”

Importantly, like Athens, Ohio, the Kanawha County School District is not discriminating: Families that say they have a need are having their needs met. “We know based on our data that the vast majority of our students need meals during this time,” Warner said.

And to see the familiar face of their school bus driver, “helps the kids,” according to Stapler. That normalcy “keeps them kind of going,” he said.

Because of their contracts, bus drivers in the county are not required to drive during the pandemic, but they are making the extra deliveries to help the community. 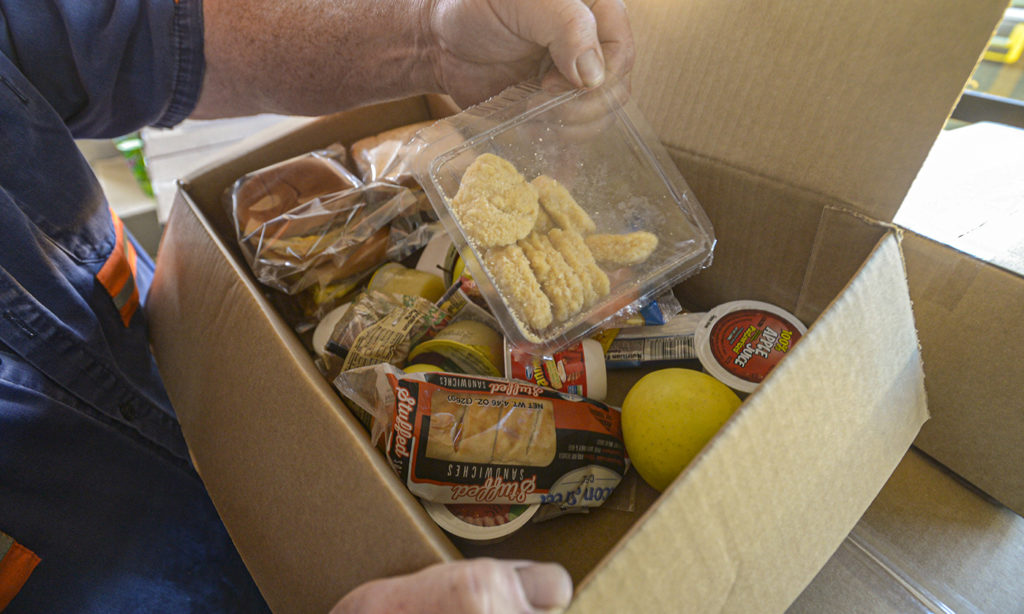 The food boxes contain chicken nuggets, fruit, and hamburgers, among other items. Photo by Brian Ferguson/100 Days in Appalachia.

“Mostly all the drivers now that are working are voluntary,” Stapler said. “We can stay home and get paid by our contract, but [we] want to come out and deliver food.”

Some bus drivers even delivered coursework in Kanawha County, packets of assignments alongside meals. As Stapler described it, “teachers ran out on some of the routes and delivered their homework [to students]”—providing another familiar, reassuring face in a time of upheaval. This work was not graded or collected, but was designed to help prevent children from falling behind, Stapler said.

That’s a necessity for many Appalachian children without home internet access. Because much learning across the U.S. has shifted online, schools have had to acknowledge that a number of their students still do not have reliable home internet service, particularly in more remote areas.

In Athens, Ohio, parents can pick up loaner technology, such as mobile hot spots and laptops, from the schools in special giveaway days. In Greenville, South Carolina, the school offers free Wi-Fi access with children’s meal pickup.

To address the inequity of households without consistent internet, some school districts in South Carolina equipped school buses with Wi-Fi and parked them in neighborhoods and rural areas. Parents drive children close to the buses to access the wireless, or children ride up on their bikes. In Cincinnati, school buses that functioned previously as bookmobiles, stocked with library sources, are being retrofitted with internet to serve as mobile hubs. 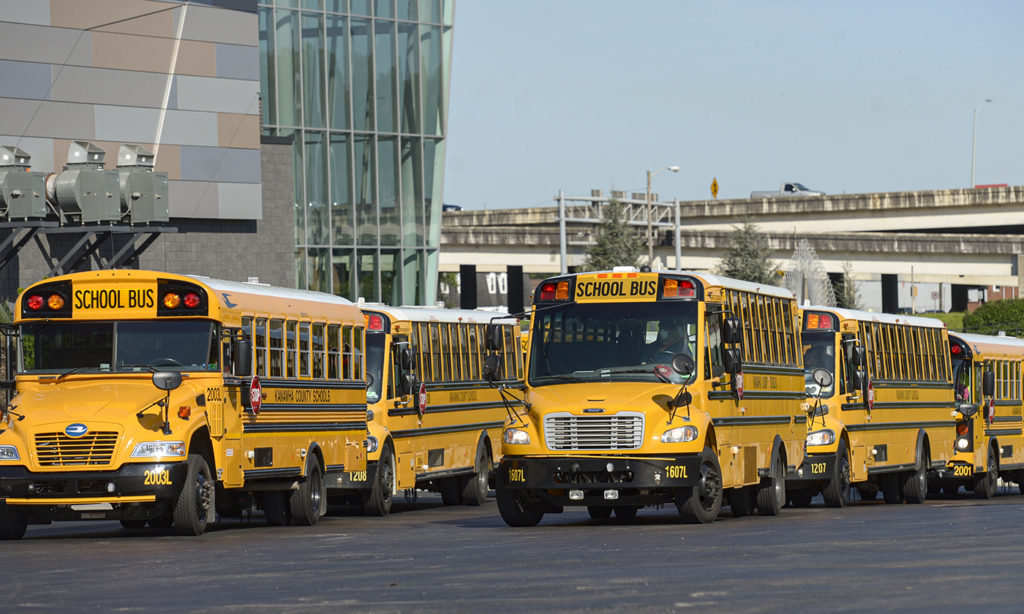 School buses line up at a loading dock in Charleston, West Viriginia. The buses will be loaded with food boxes that will be delivered to students in Kanawha County. Photo by Brian Ferguson/100 Days in Appalachia.

More and more districts outside of the Appalachian region are beginning to offer Wi-Fi in a bus, with school districts in such states as California, Florida, and Colorado enacting the idea.

Lack of internet services is also a perennial obstacle to the delivery of aid and communicating with people in remote areas, such as parts of Appalachia. To inform residents where or how to receive help, Athens volunteers are calling senior citizens, or if people don’t have telephone service, writing letters to them.

Geographically isolated and historically neglected by the rest of the nation, Appalachians are used to rising to the challenge of taking care of their own communities. And when schools closed because of the pandemic and senior citizens became trapped in their houses, these areas were able to mobilize quickly and tap into existing aid networks.

David Keller is development coordinator for the Southeast Ohio Foodbank & Regional Kitchen, which works with local, state, and federal organizations to serve more than 22,000 households in 10 Appalachian counties. But that was before the novel coronavirus outbreak. Comprising low-wage earners and many workers in the service industry, “the population we served wasn’t necessarily in the best situation before [the pandemic],” Keller said. 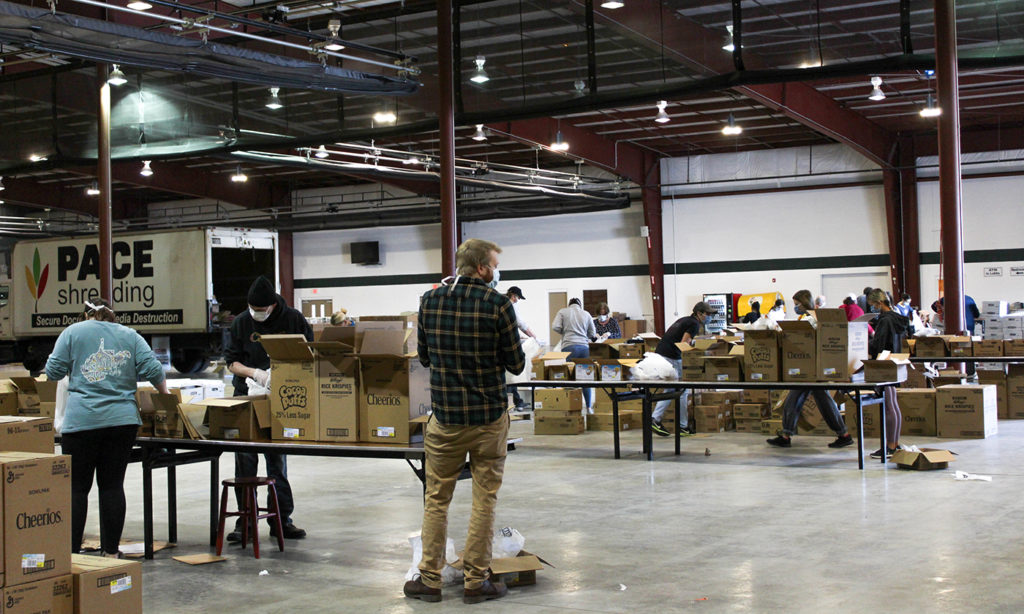 Mirroring the rest of the country as economic devastation spread, Appalachian food pantries began to see new people “coming into the emergency food network that may have never really considered that option before,” Keller said. “All they know is their family’s hungry and they’re out of work.”

Combined with burgeoning need, the more than 70 food pantries that Southeast Ohio Foodbank assists have had to deal with tightening restrictions and safety concerns, as information about how the virus spreads has changed quickly. “We have had to overhaul basically every part of our program, from what our process is when we come into work each day to how we organize and distribute food,” Keller said.

Changes include taking the temperatures of people working at pantries, distributing masks, and quickly shifting to no-contact food delivery. A food bank worker puts the box into the trunk of a client’s car, or simply leaves it outside to be collected. 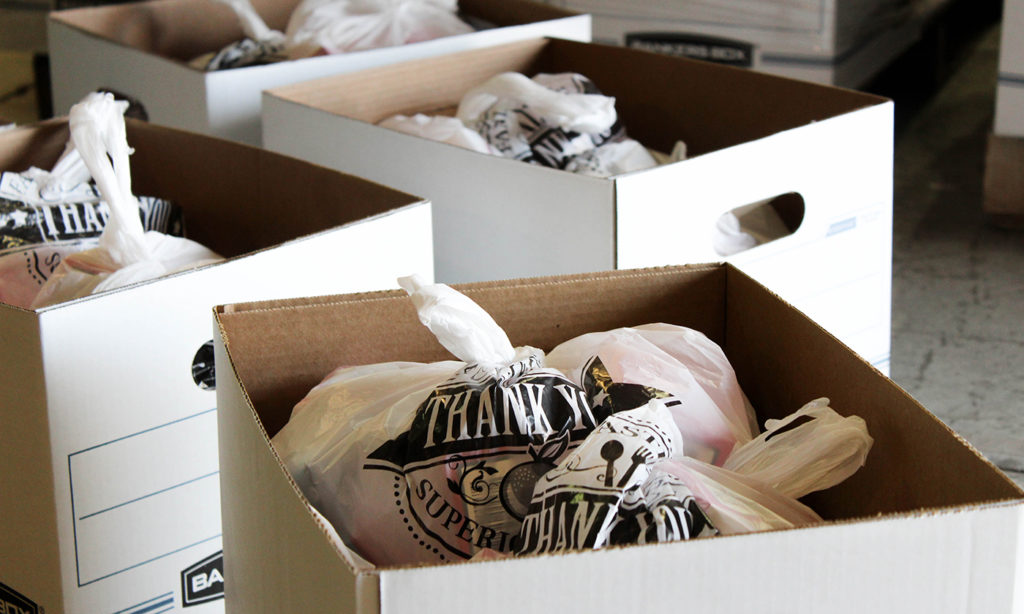 The Feed Mon Kids program attempts to provide the meals children would have received if they could attend school. Photo by Kristen Uppercue/100 Days in Appalachia.

This goes against traditional, pre-pandemic recommendations from the USDA about choice and food distribution at pantries. (Ideally, families know best what they need, and should be empowered to choose it themselves.)

The Athens City School District Food Pantry, which serves not only southeastern Ohio schoolchildren and their families, but all of Athens County, has moved to contactless food delivery, passing out pre-packed bags of food in drive-through distributions.

Anna Joyce Williams knows hunger doesn’t stop, even when the routine of daily life does. As student body vice president at Marshall University in Huntington, West Virginia, she developed a food pantry with 12 community partners in the state to serve students and the greater community. “In Appalachia, and Marshall University especially, we are fortunate to see a lot of students come to college [despite coming] from adverse situations,” Williams said. “However, a lot of hardships can follow them during this transition, finances being the largest.” Like most universities in the nation, Marshall University announced a shift to remote learning before the end of spring break. “During breaks, we [always] see a lot more traffic through our pantry as our food services on campus become more limited,” Williams said. “This time, though, we had a big increase in visitors and needs. I think the pandemic created a lot of fear for people. … The shelves nearly cleared out.”

Less formal means of delivering aid in Appalachia and other rural communities have existed for generations, through neighbors helping neighbors. In a small town, it is easy to know who is in need. What is less easy is asking for help—and reaching out and offering the same, something that some people may not have known to do before the pandemic. 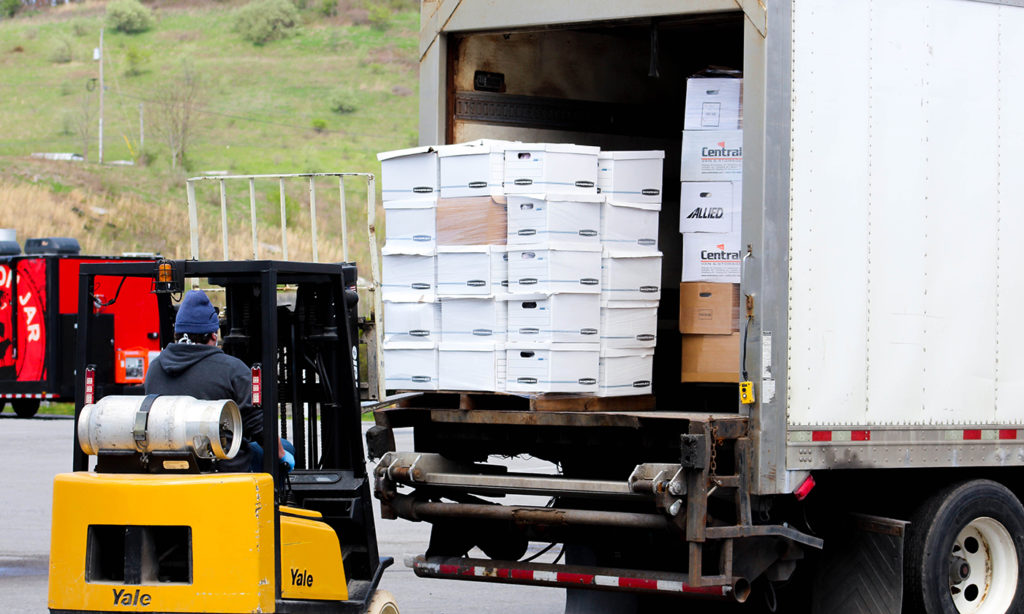 Boxes of meals packaged by volunteers with Feed Mon Kids are loaded into a truck for distribution. Photo by Kristen Uppercue/100 Days in Appalachia.

“It’s really our hope that once we weather this, there will be systemic changes in support for hunger relief throughout this country,” Keller of the Southeast Ohio Food Bank said, “because a lot of people are being brought face-to-face with issues that, fortunately, they’ve never had to deal with [before].”

Appalachia knows need, and knows that in times of increased struggle, need increases for all. While much of the country might fall back at this time, Appalachia has stepped up in ways both official and grassroots. “Pandemic or not,” Keller said, “we still have a job to do.”

Bus driver Stapler echoed this statement. “You know the drivers could stay home, but they want to come out, make sure the kids are taken care of,” he said. “Mostly drivers in [the] county always felt that way. We want to look after the kids.”

This article was produced in partnership with YES! Media, 100 Days in Appalachia, and West Virginia Public Broadcasting, with support from the One Foundation.