It began as an irreverent stunt during Donald Trump’s 2018 visit to London, a helium-filled swirl of yellow hair atop an obese, orange, diaper-clad Trump, his small hands clutching a phone. After a brief nap, Baby Trump has been pressed into service as the unofficial mascot of the anti-Trump resistance, with at least nine appearances in the United States so far.

It’s easy and gratifying to insult Trump. He offers a daily smorgasbord of contemptible flaws to feast upon. And he dishes out as good as he gets, his Twitter feed a virtual firing range of baseless, crude and bigoted put-downs. Mocking him as a fat, tantruming baby may seem a fitting and well-deserved counterattack, one that is orders of magnitude less terrible than the many acts of cruelty Trump has perpetrated.

The Baby Trump blimp, however, is emblematic of the counterproductive manner in which the left too often registers our very justified outrage.

To start with, there’s the body shaming. Hardly a day goes by without Trump’s body size, shape and color being ridiculed as grotesque. Body shaming is a form of bullying that isn’t any less cruel when done to people we don’t like. Even though Trump is the target, the blimp stigmatizes every person with bodies deemed too fat by our thinness-obsessed culture, much like the atrociously cruel and classist — yet wildly popular — People of Walmart website, which lampoons unsuspecting shoppers with shabby clothes, fat asses and other “white trash” offenses. Sizeism is one of the few forms of bigotry still tolerated by mainstream society. Why do we perpetuate it?

Like any skillful demagogue, Trump has forged a counterfeit bond with his base, a bond premised on a shared victimhood narrative of lost honor and wounded pride. What I’ve learned from conservatives over the past two years is that Trump supporters perceive an attack on him as an attack on themselves — those high and mighty liberal elites are not only smugly self-righteous, they’re mean, they hate us, we are under siege and must protect our tribe and our leader Trump.Spectacles of leftist schadenfreude paint us into a hypocritical corner, as was pointed out to me by a conservative woman I met at a cross-partisan dialogue. To put it in crass, realpolitik terms, cruelty damages our brand. It prompts the public to fixate on our ugliness instead of the dastardly policies of the Trump administration. Furthermore, it perpetuates the us-versus-them divisiveness that adult Trump so masterfully leverages to his advantage. (One of his supporters recently slashed a Baby Trump balloon with a razor blade in a self-proclaimed act of “good versus evil.”)

Conservative journalist Rod Dreher has written that, when Trump goes off the rails, his voters justify their support by saying to themselves, “He may be a fool, but he’s our fool.” Liberal mockery of Trump’s copious flaws only serves to entrench their loyalty and bolster Trump’s persecution narrative.

As has been amply documented, partisan (some call it “tribal”) polarization has reached a deleterious extreme in the United States, leading people to form knee-jerk partisan opinions instead of reflecting on the merits of contentious issues. Social psychologist Jonathan Haidt told National Affairs that, when we attempt to rationalize our partisan bias, we get rewarded with a highly pleasurable hit of dopamine. It feels good to belong to our team, our party, our tribe, and if tribal membership requires that we denigrate the “other” tribe and publicly humiliate their leader, we do it, and we do it gleefully. And when we do so, we prompt the right to hate and fear us back. For this reason, humiliating Trump plays into Trump’s us-versus-them strategy of rousing his supporters to battle against the common enemy: us.

There is, to be sure, a long tradition of satire aimed at undermining the authority and respectability of the powerful. The question is, what, if anything, does the public learn from it? Literary critic Tim Parks distinguishes effective satire, which points toward positive change, from failed satire. “[W]itty mockery of a political enemy can be hilarious and gratifying and can intensify our sense of being morally superior. But as satire it has failed,” he writes in the New York Review of Book. “The worst case is when satire reinforces the state of mind it purports to undercut, polarizes prejudices, and provokes the very behavior it condemns.”

Baby Trump falls short of Park’s standard, for it is no more enlightening than playground taunts — such as “you’re a baby,” “no you are” and “I know you are but what am I?” The overarching problem with Trump isn’t that he’s immature (or fat), it’s that he’s created what Ralph Nader calls a “cocoon of falsity” in which he smashes and breaks democratic and cultural norms and governmental functions that keep people safe, healthy, fully included and respected.

Poking fun at a degenerate figurehead is not automatically effective. If mocking Trump turned fence-sitters against him, late night comedians would have successfully blocked Trump’s candidacy before it ever gathered steam. For all the ridicule Trump’s endured, it doesn’t seem to have undermined his brazen abuse of power.

Perhaps if our national culture were one of reverence for politicians, then the mere act of mocking one would have some shock value and jolt us into seeing them in a new and unflattering light. Perhaps if Trump attempted to present himself as a dignified head of state, we would need Baby Trump to expose the contradiction between his pretend and actual disposition. At this point, anyone who doesn’t already see that the emperor has no clothes is not likely to be enlightened upon seeing him in diapers. It’s simply meanness for meanness sake.

The creators of Baby Trump said they wanted to boost the morale of Trump’s foes and to “get under his skin.” As one of the organizers wrote in the Independent, “Trump has repeatedly shown that he doesn’t respond to reason, to facts or to science. What he does respond to is humiliation.” Yes, he sure does, and that’s precisely the problem.

Evelin Lindner, a psychologist and founder of Human Dignity and Humiliation Studies, or Human DHS, has documented cycles of humiliation met by violent reprisals met by more humiliation, until the society spirals into genocidal violence. “Humiliation,” she writes, “is the nuclear bomb of the emotions, perhaps the most toxic social dynamic of our age.” It reinforces the tyrant’s self-serving rationalization that they are valiantly fighting the evildoers who are attacking them.

Linda Hartling, a community psychologist and director of Human DHS, emphasizes the boomerang nature of humiliation. “If you use humiliation as a shortcut to attack an opponent, it will come back in some way, if not at you then at someone more vulnerable,” she said. Hartling sees Trump as a “humiliation entrepreneur” who is constantly retaliating against those who pierce his thin skin.

Trump has already been ratcheting up his incitement of violence, calling for his persecutors to be tried and executed for treason and warning that civil war could break out if he’s impeached. Dozens of preeminent psychiatrists have raised red flag warnings about Trump’s anti-social, narcissistic, sadistic and sociopathic behavior. “Trump’s sociopathic characteristics … create a profound danger for America’s democracy and safety,” retired Harvard psychiatry professor Lance Dodes told the Washington Post. “Over time these characteristics will only become worse, either because Mr. Trump will succeed in gaining more power and more grandiosity with less grasp on reality, or because he will engender more criticism producing more paranoia, more lies and more enraged destruction.”

Criticism of Trump and vigorous efforts to remove him are vitally necessary, no matter what the risk of further destabilizing his mental health. But piling on personal insults adds unnecessary fuel to the fire. A deranged Trump is incredibly dangerous.Ridiculing Trump achieves nothing and risks provoking him to even more outrageous attacks and counterattacks. That’s what narcissists and demagogues do when their fragile egos are threatened. Psychiatrists warn that someone with Trump’s malignant narcissism and anti-social personality is vulnerable to a total psychotic breakdown and that, by the time the warning signs are evident, it may already be too late.

For all the grievous harm Trump has done, I cannot and do not respect him. But withholding respect and diminishing his humanity are two different things. At a minimum, I feel obliged to treat Trump with the basic decency I extend to every human being, no matter how awful I find them. To do otherwise, to dehumanize them as the “enemy other,” is to set in motion a vindictive spiral that cannot end well. Human dignity is sacred and, when it’s violated, our ability to negotiate and tolerate discord erodes, and hate and violence reign.

“Humiliation is the most destructive force on the planet,” Hartling said. “It leaves a wake of destruction, disrupting relationships in ways that are extremely difficult to repair.” Why risk so much collateral damage just for the sake of inflicting suffering on a man who is already seemingly one of the unhappiest on earth, his inner life its own perpetual torment?

“Speak the truth but not to punish,” Buddhist monk and peace activist Thich Nhat Hanh counsels. What that means to me is that, when I criticize Trump’s rampant misconduct, I focus on the actions, not the person, and contextualize the actions in systems and structures of white supremacy, patriarchy, capitalism, militarism and the resource extraction mindset. I also want to contrast Trump’s nihilism with my vision for an equitable and sustainable future, a beautiful, inclusively-interconnected sacred place where humans and all living creatures bow to each other in the great dance of life. 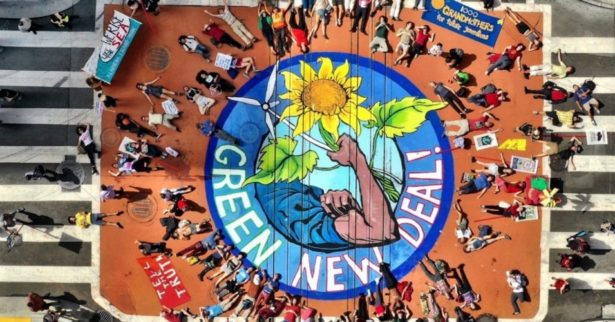 During the Sept. 25 Climate Strike in San Francisco, artists and activists from 10 environmental justice and human rights groups transformed two downtown blocks into a series of street murals representing “community-oriented and earth-based solutions” to the climate crisis. Taken together, the murals invited viewers to envision a more beautiful future that celebrates the interconnected lives of people, plants and wildlife. To me, honoring what’s sacred is worlds more inspiring than denigrating what we already know is awful.

Diné (Navajo) land and water protector and poet Lyla June Johnston suggests that the struggle of resistance against Trump and fossil fuels shouldn’t be one of hate-driven revenge against but, rather, a movement for life in all its sacred beauty. It’s not about winning, Johnston said in an interview with the podcast “For the Wild,” it’s about sustaining, diversifying, protecting and, above all, loving life.

So long as I attempt to implement my vision by denigrating those evil people who stand in my way, I am taking one step forward and two back. Aggressors usually rationalize their behavior as serving some higher purpose; seldom is that the case.

Trump must be held accountable but accountability need not take a vindictive cast. I don’t believe murderers should be executed or rapists raped. I don’t want Trump hung in effigy or body shamed, I simply want him gone and, potentially, imprisoned where he can do no further damage. And I want his supporters to feel that they have a rightful place in a post-Trump America, a place where they are treated with the same basic decency and respect as everyone else. If they don’t feel this way, brace yourself for President Donald Trump, Jr. or whatever other humiliation entrepreneur is waiting in the wings.

Hating on Trump incessantly isn’t going to be any more effective in 2020 than it was in 2016. The more we hate and humiliate him, the more his supporters will be inclined to defend him. Even if we win, we’ll be sowing the seeds of a vicious backlash. And our hatred could trigger an adult Trump tantrum of existential dimensions. Our desperately sick culture needs to heal, and more poison isn’t what the doctor ordered.

Seize the moment – the man on the moon mission starts now

California must wake up to looming fuel crisis

After oil supplies dry up, what’s Plan B?