The dramatic decision by the British government to ban the disruptive technology of hydraulic fracturing (or fracking) is just one of two volatile storms now shaking the industry.

And both have ramifications for the governments of British Columbia and Alberta, which actively subsidize the uneconomic industry with tax breaks, royalty credits, free water and taxpayer-funded seismic research and monitoring.

The first typhoon is the industry’s failing business model.

The fracking of shale formations in Canada and the United States has largely generated more negative cash flows than revenue, due to high capital, water and energy costs combined with rapid depletion rates and low commodity prices.

Canadian firms such as Ranch Energy Corp. and Bellatrix Exploration, which based their business models on fracking, recently went bankrupt, leaving massive liabilities for the public to clean up. Other companies such as Trident Exploration have gone bankrupt to low prices created by extensive shale fracking.*

The highly indebted Encana Corp., a champion of the so-called “shale gale,” banked its future on fracking and lost.

In recent years it was forced to sell off many of its holdings, lost 90 per cent of its share value and let go of thousands of employees. Just this month it changed its name and left Alberta for the oil-rich Permian Basin in Texas where companies are also losing money and going bankrupt.

Investors have become so skeptical about the industry’s ability to generate profits that they’re either openly shunning the sector or refusing to loan it money.

In recent months, the business press, including the Wall Street Journal, Forbes and the Financial Times have highlighted the sector’s uneconomic performance in markets already clobbered by low prices.

According to one Wall Street Journal analysis, 40 of the largest independent oil and gas producers collectively spent $200 billion more than they earned in revenue from fracking over the last decade.

At a petrochemicals conference in Pittsburgh last spring, the former executive of EQT, the largest methane extractor and fracker in the U.S., admitted the high-cost technology had boosted production, increased costs and slaughtered gas prices.

“The shale gas revolution has frankly been an unmitigated disaster for any buy-and-hold investor in the shale gas industry with very few limited exceptions,” said Steve Schlotterbeck.

“In fact, I’m not aware of another case of a disruptive technological change that has done so much harm to the industry that created the change.”

But this financial gale has been accompanied by a second major storm, or what is really a massive geological liability with no definite solution.

The injection of fluids a mile or two into the ground to fracture open shale-rock formations containing methane or oil can trigger unpredictable earthquakes.

Due to their shallowness, these man-made quakes can cause more severe ground motions than natural tremors.

These tremors, in turn, can damage homes and other critical infrastructure including roads, dams and gas storage operations.

Industry-triggered shaking has already lowered property values by as much as nine per cent from the more severe shakes in Oklahoma.

Jurisdictions that have allowed intense fracking or wastewater injection (both inject fluids into the ground) have now recorded thousands of seismic events (along with a posse of earthquake studies) in British Columbia, Alberta, Ohio, Colorado, Arkansas, Texas, Oklahoma, China and England.

The British government tellingly announced its historic fracking ban after the U.K. Oil and Gas Authority concluded last week that it wasn’t possible to predict the timing or severity of tremors caused by the industry.

(An independent report for B.C.’s Oil and Gas Commission on a magnitude 4.5 tremor caused by fracking made a similar admission, as The Tyee reported last month.)

But the U.K. regulator went much further and warned in its summary report that fracking can cause uncontrollable tremors in frequency and magnitude, and “the possibility of larger events could not be excluded and these could cause damage and disturbance unacceptable [to British guidelines]” for the industry.

Moreover, it found, “The methods for predicting event maximum and magnitude need further testing and cannot be viewed as reliable.”

In other words, the British regulator can’t guarantee public safety in regions made seismically active by the industry.

Hence the ban on the technology by a Conservative government that previously championed and subsidized the industry with a decade-old promise that it would provide jobs and improve energy security.

To date, fracking has done neither. But Conservative advocacy for the disruptive technology has turned thousands of conservative rural British voters into anti-fracking activists. 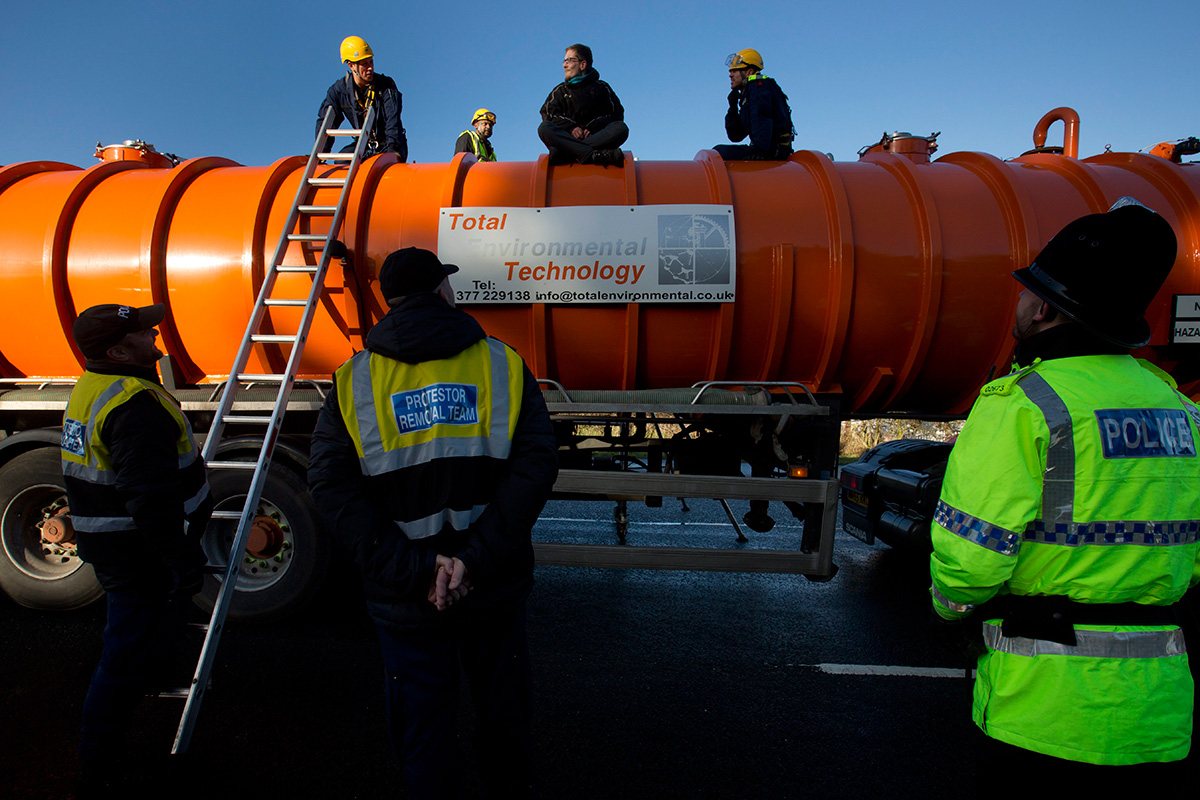 The U.K. regulator based its headline-making conclusions on four separate reports that it requested after just one company, Caudrilla Resources, set off a swarm of earthquakes in 2018 at Preston New Road in the Bowland Shale in northern England.

Over a two-month period, the fracking operation authored a total of 57 seismic events.

Six tremors exceeded the maximum “red light” threshold of magnitude 0.5 in the U.K., a system that suspends activity in an effort to prevent larger quakes. (The thresholds in Canada are a much more liberal magnitude three or four.)

As a result of the earthquake swarm, the regulator ordered an investigation in February.

Since then, Caudrilla submitted another fracking plan to authorities, and this time it generated a magnitude 2.9 quake that was widely felt by rural homeowners last August.

That tremor forced the suspension of activity at the well site, and Caudrilla has now abandoned the operation.

In any case the U.K. authority tabled the results of its investigation nine months later.

(In contrast, neither B.C. nor Alberta regulators have tabled reports on two respective magnitude 4.5 and 4.2 tremors that shook hundreds of residents last November and March near Fort St. John, B.C. and Red Deer, Alta.)

The four critical U.K. studies offer a number of conclusions and observations that Canadian politicians, regulators, researchers and landowners need to seriously ponder.

One of the more salient findings is this:

“It is thus clear that induced seismicity can give rise to significant events in the range of [magnitude 4.0 to 6.0], indicating that, at least in the case of shale gas and Enhanced Geothermal System activities, more energy can be released than has been introduced by the injected fluids.”

A technical study examining the cause of the quakes at Preston New Road highlighted that fracking provoked chaotic and unpredictable seismic responses in the ground just as The Tyee has consistently reported for years.

“For starters many events occur at large distances from the well for stages with only small injection volumes and that events occur near-instantaneously across a range of distances,” said the report.

Another study that looked at the impact of industry-triggered seismicity on people and buildings, something neither B.C. nor Alberta regulators have publicly done.

It confirmed that the hazards were daunting.

A magnitude 4.5, which both B.C. and Alberta have experienced in rural areas, would result in “widespread building damage in the study area, with cracked plasterwork affecting approximately 10 per cent of buildings, more serious structural damage (of varying degrees) affecting 5.4 per cent of buildings, and 5.4 per cent also likely to suffer chimney failure. Some damage would be caused to buildings outside of the study area.”

The hazard risk report added that “Experience from Preston New Road shows that there is very limited tolerance to seismic events that are felt, and that even very few events are likely to be considered a public nuisance.”

It reported that four models were tested “against the observed seismicity using the injection volume and seismicity for each fracturing stage separately, [but] they were not very successful in forecasting maximum magnitude.”

In addition, “the forecasts lose their sensitivity to the cumulative injection volume.”

A fourth report looked at the situation in Canada and other jurisdictions and once again pointed out the failings of “traffic light systems,” or the idea that industry can prevent big quakes by shutting down operations when they make smaller quakes.

However, the U.K. regulator noted Canada’s traffic light systems weren’t very restrictive. The traffic light thresholds in Canada “have typically been set quite high even at the ‘amber’ level with ‘red’ thresholds close to the maximum size of event subsequently observed.”

In B.C. for example, the oil and gas industry has to report magnitude 1.5 quakes around Fort St. John and the Site C dam, but doesn’t have to shut down operations until it has triggered a magnitude 3.0 tremor.

In addition, “mitigation protocols do not appear to take into account the real-time development of the frequency or location of potential precursors to larger events.”

In jurisdictions where industry has set off magnitude 4.0 quakes such as China and Canada, “either no [traffic light system] was in place, the system was not followed or the thresholds were so large as to be ineffective.”

Last but not least, it was noted that the U.K. had the most restrictive traffic light system in the world. Operators must shut down once they have caused a magnitude 0.5 quake to minimize the probability of greater quakes.

Unlike other jurisdictions, U.K. authorities have collected more scientific information on industry quakes, including event data, pumping data, a summary of produced water, screen shots of the hydraulic fracturing operations, and a seismic event video. (Corporate confidentiality has prevented such data sharing in Canada.)

Yet even with more scientific data and tighter rules, U.K. authorities admit they have not been able to prevent tremors that posed a hazard to the public.

Both the seismic science and shaky economics probably helped to convince the Conservative government to temporarily ban fracking. (If the science changes, Tory ministers have said they might change their minds.)

But politics and an upcoming election played a major role too. Rural Conservative MPs, many who openly characterize fracking as “downright bonkers,” have warned about its political liabilities for years.

A decade ago government fracking advocates also claimed that fracking would provide the U.K. with methane for 50 years. Those claims proved bogus.

It is now calculated that the industry can produce fewer than 10 years of methane demand, along with pricey earthquakes, rural industrialization and widespread property damage.

In a recent Guardian interview, Jon Gluyas, director of the Durham Energy Institute at Durham University, noted that the disruptive industry has wasted time and taxpayer resources.

“The government ban on fracking is a neat way of ignoring the now inescapable truth that the projected shale gas potential for the U.K. is tiny at best,” said Gluyas. “We have, though, as a nation wasted a decade hoping for more gas to heat our homes rather than installing ultra-low carbon geothermal heating like that used in much of Europe.”

But with its historic fracking ban, the U.K. government has now admitted that fracking can be as disruptive to the geology and politics of a nation as the divisive technology of Facebook has been to Britain’s social media.

*Story updated at 12:30 p.m. on Nov. 8 to clarify that Trident Exploration went bankrupt due to low prices created by extensive shale fracking.