Good short article about our work. However, we share it with one clarification. We, Cooperation Jackson, were not largely responsible for the election of the current administration in Jackson, many of our members were part of the broad coalition that helped the administration get elected. This is critical for everyone to note and learn from in regards to understanding municipal politics and power.

The sun beats down on a mostly unoccupied shopping complex, surrounded by food banks and homeless shelters. On a Saturday afternoon in mid-August, temperatures in Jackson, Mississippi near 38° C. The complex has a Dollar General full of packaged snacks, which is the closest thing to a grocery in this food desert of a neighborhood. Next to it, a large empty space was, until recently, an actual grocery. Jackson Cash & Carry was one of the last black-owned groceries in the United States until its owner couldn’t come up with the hundreds of thousands of dollars needed for building repairs. (Historically, Mississippi banks hesitate to loan to black business owners.)

But on this day, the recently renamed Ida B. Wells Plaza is more active than usual. A local nonprofit, Cooperation Jackson, purchased the complex, commissioned a mural of Wells — a prominent 19th-century black feminist and journalist — and is hosting a Black August celebration in the parking lot. Black August is a liberation movement, started in California prisons in the 1970s, to commemorate martyrs and imprisoned African-American revolutionaries.

Kids tumble around an inflatable bounce house, while young men cook batches of chicken and burgers on backyard grills. Vendors sell jewelry and artists stir paint, which turns watery in the heat. In a few weeks, an entire wall will be covered in fresh murals. 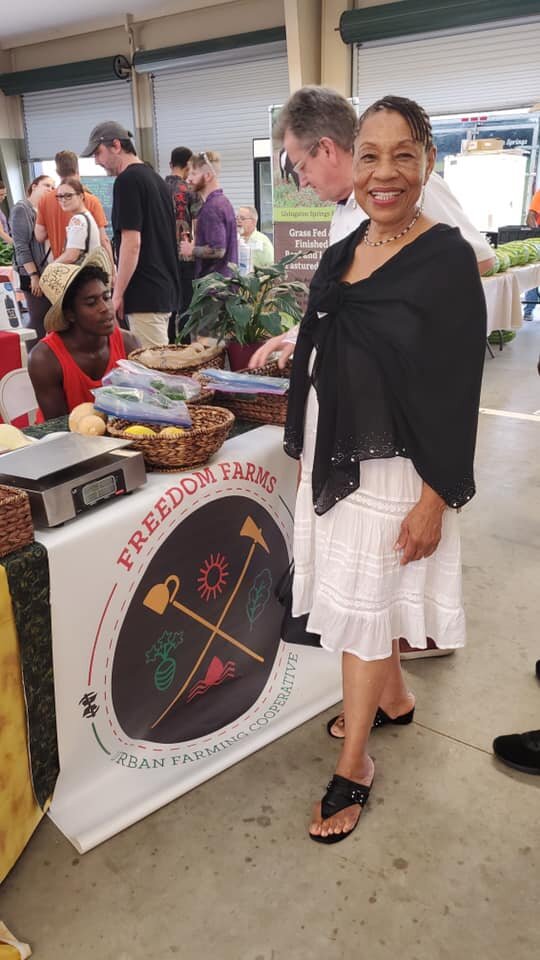 Freedom Farms is one of the cooperatives formed under the umbrella of Cooperation Jackson. The organization’s ultimate goal is to create a federation of worker-owned cooperatives, in addition to a cooperative incubator, a cooperative financial institution, and an eco-village built on a community land trust. Inspired by the black-collectivism and self-deterministic vision of NAACP co-founder W.E.B. Dubois, the survival programs of the Black Panther Party for Self-Defense, and the Zapatista movement for indigenous rights, Cooperation Jackson’s goal is to form a solidarity economy that values all contributions equally, regardless of race, gender and class.

Cooperation Jackson is only five years old, but the vision behind it is older. The original founders met through another organization focused on Black Liberation, the Malcolm X Grassroots Movement. They began to strategize to build a community of cooperatives in 2001, while many still lived in disparate parts of the country. Eventually, they chose to launch their participatory democracy project in Jackson, Mississippi. With a population of 165,000, eighty-one percent of which is black, Jackson is the capital city of the blackest and poorest state in the U.S.

Prior to the Civil War, Mississippi was one of the wealthiest states. That wealth was rooted in agriculture and built on slavery. Over the past century and a half, Mississippi has become famous for its musical, literary, and Civil Rights contributions and infamous for its racist politicians, lynchings and poverty.

“Jackson is a place that, with our limited energy and resources, we felt we could have an impact,” says a Cooperation Jackson founder, Kali Akuno. “There’s a rich history of struggle that’s already here and a high level of Black autonomous infrastructure.”

From 2008 to 2013, Cooperation Jackson founders began to concentrate in Jackson from throughout the city, state and around the country and purchase land, which they folded into a community land trust. Cooperation Jackson owns about three hectares, although they expect to receive a donation of 12 more soon — land they hope to plant with industrial hemp and bamboo for building materials.

“The long term plan is to create a series of models that can be used to build deeply affordable housing with locally sourced materials,” says Akuno. “Hemp can be flattened, reinforced, made into bricks.” By mid-2020, they plan to build their first model hemp house, using the 3-D printer in their collectively-owned Center for Community Production. Over the next few years, they want to create an eco-village full of hemp houses, which people can purchase with sweat equity and time-banking. They also plan to build compost toilets, install solar panels, recycle greywater and keep everything as off-grid as possible. The yards of these model homes will be planted with edibles.

Much of the land Cooperation Jackson owns is along a once-residential street, now lined with concrete steps that no longer lead to porches. The houses were so far gone that they’ve been demolished. But the co-op owns three livable houses, housing members, and it is currently renovating two more. One of them will be a guest-house to host representatives from other co-ops and volunteer laborers. The other will be a safe house for LGBTQ community members who have nowhere to go.

Jackson has a 29-percent poverty rate. According to Allison Cox, the Deputy Director of Jackson Housing Authority, which oversees public housing for low-income residents, there are hundreds of people waiting for housing vouchers. The department hasn’t been able to move anyone from its waiting list since 2008. The city currently offers vouchers to about 7,000 residents.

A minimum wage worker logging 40 hours a week earns $290. Median rent in Jackson is $800 a month. This means rent often costs well over half of monthly earnings.

In the U.S., one of the most common incentives for affordable housing is tax breaks, offered to for-profit developers. This model sets rent prices based around the area’s median-income, often charging 20 percent of that income. This means “low-income” housing is still out of reach for the poorest families.

This model is also short-sighted since affordable housing requirements usually expire 15 years after a tax incentive. When they expire, affordable units usually revert to market rates. The tax incentive model is strongly grounded in capitalism. Developers offer affordable units in up-and-coming markets. The new residents help develop the market, driving up market rates, so that when the requirements expire, the developers make a profit.

The community land trust (CLT) model is based on the collective, nonprofit stewardship of the land. Individuals may own structures on the land, but the land itself belongs to the trust. The individual is only allowed to sell these structures pursuant to the terms established by the trust, which keeps the land and structures permanently affordable.

“The CLT model says property prices shouldn’t go up and down. You shouldn’t get a windfall just because you own property,” says Andy Frame, executive director with Revitalize Mississippi, another organization seeking to establish a community land trust in Jackson. “If people come in and buy property at a tax sale, but don’t live in the community and invest in the property, they’re hurting everybody around them.”

Jason Webb, with Grounded Solutions — a national network of community land trusts — believes that eventually even the most blighted communities will gentrify. “Once it starts happening, you have very few tools to slow it down,” he says.

Community land trusts remove land from the speculative market, often while it’s still affordable. Webb helped Cooperation Jackson develop a business plan. “Conditions in West Jackson, where you have a lot of vacant land and abandoned structures, are perfect for a CLT. Probably nowhere else in the US could you buy that much land, with that small amount of money,” Webb says.

But housing is only part of Cooperation Jackson’s mission.

Eventually, Cooperation Jackson wants to establish many worker-owned businesses. They operate a cooperative incubator in the Balagoon Center (named for Kuwasi Balagoon, a queer tenant organizer, anarchist and Black Panther), where they also have administrative offices and monthly member meetings.

Cooperation Jackson already has three worker-owned cooperatives. The Green Team is a lawn care business that composts its clippings. At Freedom Farms, workers grow organic vegetables that are distributed to members and the community and sold at farmers’ markets. The Center for Community Production operates a traditional printing business while working to increase its capacity to print more complex materials for housing, playgrounds and whatever else the cooperative needs. Making things locally is a way for Cooperation Jackson to cut carbon emissions from the transport of goods. The co-op also plans to reopen the grocery store in Ida B. Wells Plaza, to hire its former owner, and to stock the shelves with produce from Freedom Farms.

“We want to create a movement throughout the state of Mississippi,” says Akuno. “We want people to use our model in other cities to create a whole different type of solidarity and exchange economy, which enables people who are money-poor, but skilled and time-rich, to get their needs met.”

There have been learning curves. Originally, Cooperation Jackson was trying to work through established channels of government. They selected and campaigned for candidates they thought were committed to a similar view of economic democracy. But this began to seem like an ineffective distraction and at best, a short-term remedy. The co-op collectively decided to distance itself from the city administration, which its members were largely responsible for electing.

There have been challenges even among members, in regards to gender dynamics and overt advocacy for the LGBTQ community. “As individuals, we still limit ourselves in a lot of ways,” says Hall. “We have to be actively vigilant around how people’s voices are represented, even nonverbally. We need to do a better job of recognizing that any economic system is centered around women, as people who are providing care work that allows for other work to be done. We could be stronger in having a feminist lens on the work that we’re doing.”

Cooperation Jackson has been more successful at hiring neighborhood men than neighborhood women for co-op jobs, and more men come to member meetings. “There’s nothing that we’re doing in terms of recruitment that brings in men, but men are the majority of people who are on the street, who will ask for work. Women aren’t on the streets in the same way,” Hall says.

It’s an imbalance she wants to remedy.

Imani Olugbala, a longtime local activist, is the anchor of Freedom Farms. She has lived in the neighborhood adjoining the co-op for two decades. She raised eight kids and is raising three grandkids there.

The farmworkers, most just out of high school, buzz around Olugbala in the closet-sized room that serves as Freedom Farms headquarters. They talk scheduling and turn in “homework” — worksheets and research related to farming. They ask advice on dealing with younger siblings. They treat her as a mentor, and in some cases, a parent.

A portion of Freedom Farms is being dug up for an aquaponics pond, where waste from fish will become nutrients to feed plants. A practice model — a fish tank and bean sprouts — is set up near Olugbala’s desk. The bean sprouts have been swaying and moving all day.

Cooperation Jackson is a long term vision. “We’re going to ultimately have to create our own network of supply and value chain,” says Akuno. “If we exist in a bubble, we won’t survive. It’s a big experiment in democracy. Talk to us in ten years, and see where we’re going.”