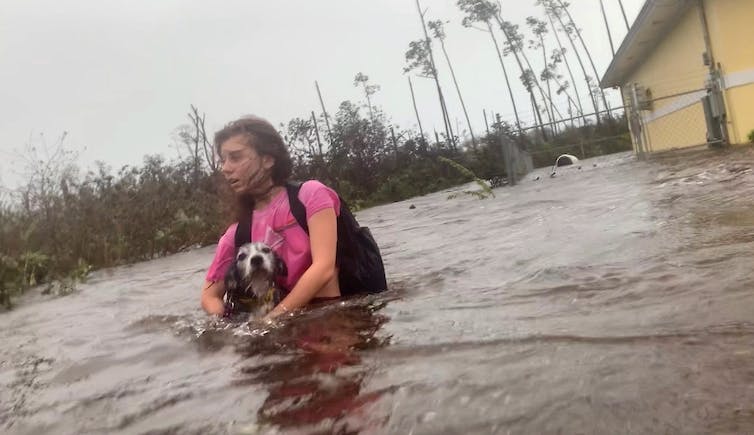 Julia Aylen wades through waist-deep water carrying her pet dog as she is rescued during Hurricane Dorian in Freeport, Bahamas. AP Photo/Tim Aylen

Hurricane Dorian has devastated communities in the Bahamas, putting the human dimensions of climate change at the forefront of the news as the world grapples with the ongoing failure of many governments to effectively decrease greenhouse gas emissions. Two recently released climate reports by the United Nations Human Rights Council provide insights into future challenges.

The July 2019 Safe Climate report by David Boyd, the special rapporteur on human rights and the environment, clarifies the obligations of states to protect human rights from climate harms. The report also confirms the existing responsibility of businesses to respect human rights, especially as they pertain to climate change.

An earlier report on climate change and poverty, released in June 2019, was written by Philip Alston, the special rapporteur on extreme poverty and human rights. This report draws attention to the disproportionate and devastating impact of unmitigated climate change on those living in poverty.

Both reports point out that urgent action is needed by governments. Our research suggests that international human rights law may already offer useful tools to prevent and remedy climate injustice, including the responsibilities of business enterprises as reinforced in the Boyd report.

The Alston report classifies the human rights impacts of climate change as a climate apartheid in which the rich would “pay to escape overheating, hunger and conflict while the rest of the world is left to suffer.” The scale of this climate emergency very much depends on the level of effort the global community puts into mitigation. 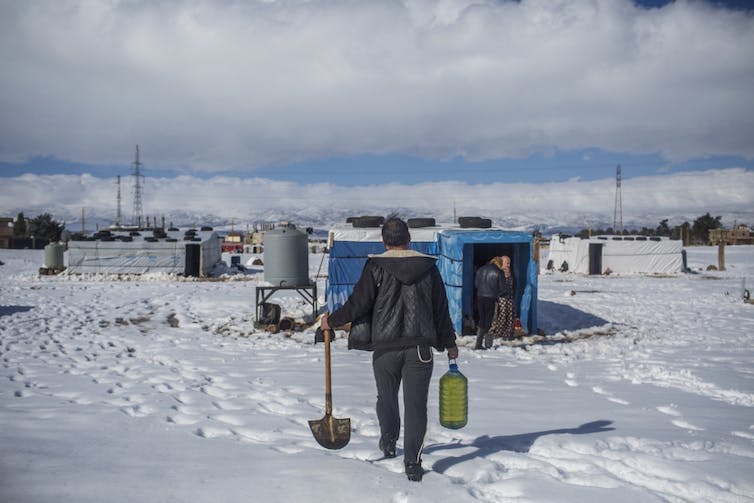 A Syrian refugee walks through the snow at an informal settlement camp in Lebanon, which experienced its harshest winter in years. UNHCR/Diego Ibarra Sánchez, CC BY

A two-degree increase would put an additional 100 million to 400 million people at risk of hunger, and one billion to two billion may not have access to adequate water. A total of 140 million people in the poorest parts of Africa, Asia and Latin America could be displaced by climate change by 2050.

Both reports detail incidents of permanent climate loss and damage which exceed our financial and technological capacities to restore. Our recent research documents existing incidents of loss and damage in small, vulnerable countries. As we concluded in another recent contribution to Climate Policy, those harmed by human-induced climate change will increasingly seek restitution from those who have contributed to the harm suffered.

Current mitigation commitments will still result in a three-degree or higher rise in global temperatures. Nationally determined commitments (NDCs) under the Paris Agreement leave a significant gap. Many countries are not yet on target to meet their existing NDC commitments.

The scale of the overall impact, even at 1.5 degrees, is unprecedented. Climate change will exacerbate existing poverty and inequality between developed and developing countries, and also within countries.

The inequity of this disproportionate impact is exacerbated by the fact that those living in poverty have contributed — and will continue to contribute — the least to the problem. The poorest half of the global population is responsible for only 10 per cent of global greenhouse gas emissions. On the other hand, a person in the top one per cent (which includes most middle class citizens in developed countries) is on average responsible for 175 times more emissions than a person in the bottom 10 per cent. 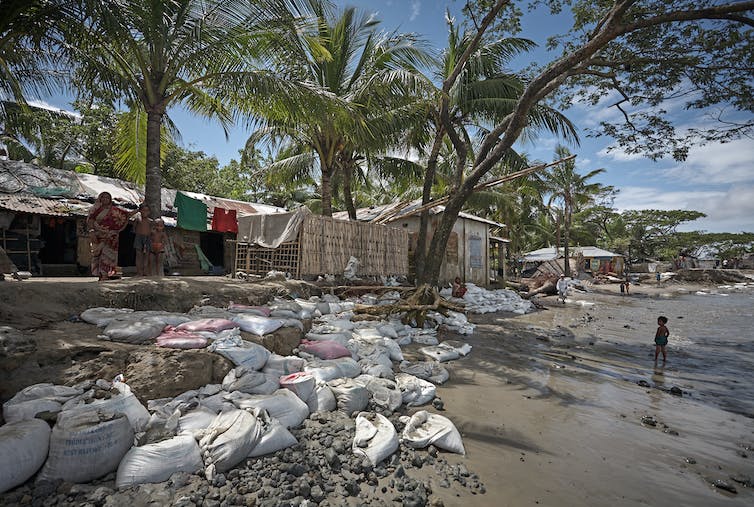 Sandbags on the seashore in Bangladesh to protect houses from rising sea levels due to climate change. Shutterstock

Climate justice has been a constant refrain by many vulnerable, developing countries during climate negotiations. However, as developed countries grew rich by burning an irresponsible amount of fossil fuels, international human rights law has failed to determine the responsibility of wealthier countries to provide assistance to developing countries for climate action. Meanwhile, almost no attention has been paid to understanding how the independent responsibilities of business to respect human rights apply in the climate context.

However, while it is clear that developed countries are largely responsible for historic emissions, some of the major emitters listed in Richard Heede’s groundbreaking report are located in the global South, including countries such as Saudi Arabia, Iran, China, India, Venezuela, Mexico, Kuwait, Abu Dhabi and Algeria. This activity accumulated vast wealth for these industries and countries (or at least their governments), but has contributed to devastating climate-induced impacts for others.

The Alston report suggests that the only way to address the human rights dimensions of climate crisis is for states to effectively regulate businesses and for those harmed by climate change to successfully sue responsible companies in court. The implication is that in the absence of regulation, businesses do not have a responsibility to reduce emissions.

Yet, the UN’s “Key Messages on Climate Change and Human Rights” states that “businesses are also duty-bearers and must be accountable for their own climate impacts.”

Similarly, the 2018 statement on climate change of the Committee on Economic, Social and Cultural Rights expressly notes that “corporate entities are expected to respect Covenant rights regardless of whether domestic laws exist or are fully enforced in practice.”

Various other initiatives have grappled with business responsibilities, including the 2018 Principles on Climate Obligations of Enterprises.

However, the Safe Climate report goes further, stating that businesses “must adopt human rights policies, conduct human rights due diligence, remedy human rights violations for which they are responsible, and work to influence other actors to respect human rights where relationships of leverage exist.” These responsibilities includes the reduction of greenhouse gas emissions from activities, products and services, minimizing emissions from suppliers and ensuring those impacted can access remedies.

The devastating impacts of climate change on those already living in poverty are increasingly difficult or impossible to avoid. Given the failure of many states to meet their own obligations, it is crucial that the responsibility of businesses to respect human rights be taken seriously by those advocating for climate action. Businesses, as organs of society, must ratchet up their existing responsibilities to alleviate increasing climate impacts on those who can least afford to bear them.