Drama is useful in getting attention for our issues. The Sunrise Movement is only one of the recent movements that grew by seizing the public imagination through drama. How do activists come up with direct action tactics that reach, in author Jonathan Smucker’s useful phrase, “beyond the choir”?

Here we’re entering the realm of creativity. Television shows relying on drama create writers’ rooms where a group of creative people swap ideas and generate options. Activists who expect wonderful ideas to emerge during a large meeting in a dreary church basement after a long workday may not be setting themselves up for success. Kibitzing with creative friends in a bar after the meeting might work better.

Creativity can also be an individual thing. A great idea may come in the shower, while walking along the river, in a worshipping community, while staring out of the window after reading about other actions. One friend of mine likes to scan in a relaxed way Gene Sharp’s list of almost two hundred nonviolent methods.

While it’s true that a clash with others, including authorities, is an invitation to drama, a conflict can easily be a dud through repetition. Consider the period after the Battle of Seattle in 1999, when a mass of global justice advocates brought the meeting of the World Trade Organization to a premature close. The word went out: Gather at a spot where powerholders meet, generate chaos and get publicity for your cause. The clashes happened at political conventions and elsewhere. While they were exciting for many participants and sometimes got local coverage, the outcomes often turned out to be predictable. The result: little attention for the issue.

When the Sunrise Movement’s young people occupied House Speaker Nancy Pelosi’s office in November no one could know what would happen, Sunrise spokesperson Stephen O’Hanlon told me. Sunrise demanded she support the Green New Deal. The big question, however, was: Would she meet that demand, or at least support the formation of a select committee? (Ultimately, she did allow a select committee on the climate crisis.)

Other questions emerged: Would she have them arrested? (In the end, she did not.) Would the Green New Deal attract an enormous buzz? (When all was said and done, it received such enormous mainstream media attention that early opinion polls showed majority grassroots support from Republicans as well as Democrats.)

What worked was the suspense built into the action.

Stakes can be life or death

Even a small group can sometimes use this dynamic on a large scale. In 1965, President Lyndon B. Johnson, the “peace candidate” in the 1964 election, escalated the Vietnam war. At that time the wider public had only a dim awareness of where Vietnam was and how that small country might be suffering. In fact, the Vietnamese experienced a bombing campaign that was more massive than that unleashed on all of Europe by the allies during World War II.

In 1966 Ohio Quaker Horace Champney had an idea for an action, just when the new organization A Quaker Action Group, or AQAG, was looking for one. Horace proposed to put the federal government in a dilemma by trying to take medical supplies to North Vietnamese civilians suffering under the bombing.

Americans support disaster relief, but didn’t realize that in Vietnam our taxes were paying for the disaster instead of the relief. Creating drama by attempting to bring relief might shift public opinion. True, the government did justify the bombing by painting North Vietnam as the enemy, but Quakers were widely seen as “good guys,” maybe naïve yet sometimes on the right side of history.

AQAG — of which I was a member — decided that a sailing ship physically attempting to bring medical supplies might show the war in a new light, opening new doors to the growing peace movement. That would be our strategic objective.

AQAG co-chair George Willoughby knew that a sailing ship “takes the time it takes” to get somewhere, producing a continual drumroll and building suspense. In 1958, he’d sailed on the Golden Rule toward the Pacific’s nuclear testing zone for the Committee for Nonviolent Action. The voyage reaped wide attention, helping build the successful campaign against nuclear testing in the atmosphere.

In 1966, almost 10 years after George’s voyage, Earle Reynolds offered his ketch-rigged sailing ship Phoenix for AQAG’s project. What would make this voyage dramatic was that no one could predict what would happen. U.S. destroyers and aircraft carriers occupied the South China Sea, blockading North Vietnam.

Could the Phoenix sail through the U.S. Seventh Fleet? Would the United States stop the ship and crew in Hiroshima or Hong Kong, our departure points? Would it seize the Phoenix on the high seas? Would it stage an “accident” such that the Phoenix was mysteriously lost?

We needed a crew whose members realized they might not return. Crew member Betty Boardman recounts in her book “The Phoenix Trip” the moment when a U.S. jet did in fact dive at them, pulling out of its dive only a short distance from the main mast. 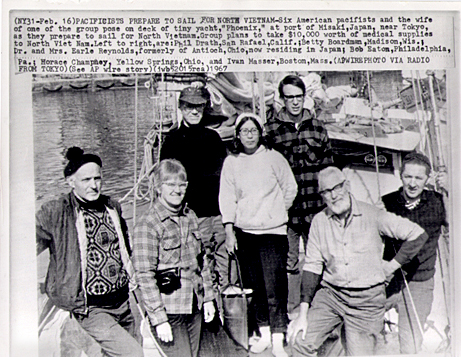 I’ll never forget our meeting in Washington with officials from the Departments of State, Treasury and Defense. We knew we were already surveilled and the feds knew what we were planning, but we liked the assertiveness of our seeking a meeting — the better to tell them to their faces.

In that meeting they threatened us with multiple consequences, such as seizing our bank account, fining us and arresting the crew. As it turned out, however, the three federal departments couldn’t themselves agree on what to do with the Phoenix.

Instead, they kicked the decision upstairs to the White House. There it was decided to allow the Phoenix to get to Haiphong harbor in North Vietnam, and National Security Advisor Walt Rostow was assigned the task of making sure that the Phoenix remained safe.

I learned more about that decision later. While making a cross-country speaking tour I was confronted by an angry Navy pilot. The buzz-cut, heavily muscled young man stopped me before I could enter the Midwest campus chapel where I was to speak.

“I was a pilot on the aircraft carrier near you guys on the Phoenix,” he said, mistaking me for a crew member for that voyage. (I was actually on a later crew, for the voyage to South Vietnam with aid for the anti-war Buddhists.)

The upset young man continued by saying, “We were scheduled to fly that day for a training exercise. We were laying bets with each other about which one of us would sink your boat. Then, just when we were getting ready to take off, there was a command on the loud speaker cancelling the exercise. They said the command came directly from the White House.”

This man was still angry at having missed his chance, and saw me as one of the betrayers of his country. I invited him into the chapel to join the meeting, telling him I’d give him a chance to say his piece. Surprised, he hesitated, then abruptly turned and left.

The Phoenix voyage to North Vietnam was widely reported on nightly TV news, newspapers and magazines. On return to the United States, crew members were in demand as doors swung open in religious institutions and civic groups. Middle America was waking up to what was going on.

Today’s campaigns for the Green New Deal, Medicare for All and other bold proposals will increase their chances by organizing more nonviolent direct actions to grow their movements. Such campaigns need tactics that break through in the media, clear messages delivered by disruptive actions that build suspense — endings not easily predicted.

Slowing down to build greater suspense

As the ‘60s wore on, liberals who supported the empire began to describe the Vietnam war as a “tragic mistake,” implying that mass destruction in Vietnam was unique. Larry Scott, AQAG’s lead organizer, suggested we counter these opinion leaders by exposing the U.S. investment in biological warfare, grisly weapons intended for mass destruction.

Almost no one knew, for example, that the Edgewood Arsenal in Northern Maryland was actually stockpiling anthrax.

In 1970, AQAG launched a walk from the Capitol steps in Washington, D.C. to Edgewood, about 60 miles. The walkers carried seedlings and young pine trees, symbols of the U.S. colonial struggle, as well as life and ecological sanity.

To increase uncertainty, they said they would try to plant the trees on the grounds of the Arsenal in order to confront death with life and expose the hidden reality.

The drumroll started at the steps of the Capitol, then increased each day as the walkers stopped at multiple points and explained what they were doing and why.

The media asked the commander of the Arsenal: would the Arsenal allow the pine trees to be planted there? It was a classic dilemma action, because the commander was damned if he allowed the plantings, and damned if he didn’t. (Side note: I invented the concept “dilemma demonstration” for my book “Toward a Living Revolution.” Many writers have since picked up the concept.)

The numbers in the walk grew along with the publicity. The walkers were in no hurry. Discussion grew in the media: What is actually going on at Edgewood?

Finally, the walkers arrived with the commander refusing permission to plant the trees on Arsenal grounds. The walkers proceeded to try to plant the trees, and arrests were made one day after another. By the end of a week, 29 campaigners and even several pine trees were arrested.

Finally, unable to tolerate the growing heat, the commander told the media, “We’ll accept the tree as a tree.”

That’s when the Baltimore Evening Sun editorialized, “The wonder is that it took Edgewood a week of confrontations with peace marchers, 29 arrests, endless humiliating pictures of husky [military police] glaring at the offensive seedlings to get the point. The point is that, if rival symbols were to be juggled, the tree had them licked before they started. In symbol language, when the tree said life, all Edgewood could say back was death, no matter how daintily it picked its phrases.”

Many activists now understand that clear messaging and unusual and colorful actions are a plus when growing a campaign. A third element adds still more to an action’s power: the uncertainty of outcome. If we simply rush into the streets in a traffic blockade, everyone knows what’s going to happen and media coverage focuses on how disruptive we can be instead of our message. With creativity, we may design actions that build drama through presenting a dilemma to the target and over time maintain suspense about the outcome.