Climate change is expected to have a striking impact on vulnerable communities, especially in coastal regions where sea-level rise and increased climatic events will make it impossible for some people to remain on their land.

Since 1994, the islanders of the seven atolls, lying only 1.2 metres above sea level, have already lost about 50 per cent of their land. Traditional food sources have become scarce, regularly placing the islanders in situations of near famine. The communities also face severe water shortages due to prolonged droughts and sea-level rises that affect their freshwater supply. 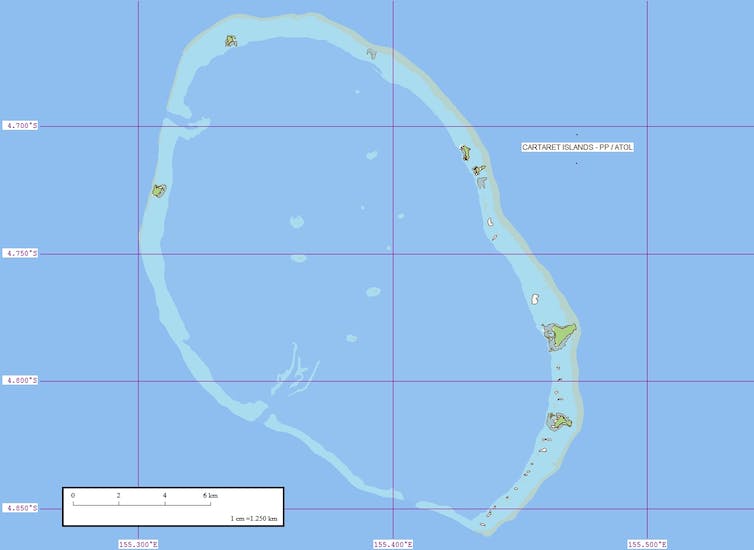 The Carteret Islands make up a low-lying atoll in the South Pacific Ocean. Mr Minton/flickr, CC BY

In 2005, having gained worldwide media attention for their plight, the Carteret islanders were named the world’s first “climate refugees,” a label inspired by those who seek asylum under the Geneva Convention.

Fourteen years later, the islanders are still struggling, and their struggles have become emblematic of the international community’s lack of consideration for climate injustice. My research and recording of their story informs us on the realities of climate change, the consequences of our way of life and the political construction of climate vulnerability.

The Carteret islanders’ situation can be partly explained by political struggles. The recent civil war (1988-1998) has blurred the separation of powers between the Autonomous Region of Bougainville, which governs the islands, and the Papua New Guinea central government. With the country’s complex societal structure — based on clans, tribes and ethnic links — and rampant corruption, the provincial and national states have been incapable of addressing the plight of Carteret islanders.

A representative of the autonomous region has admitted the administration has invested little time and money in the Carteret Islands due to their small socio-economic capacity. Meanwhile, the central government has been squeamish about meddling in provincial affairs.

The political and social structures are sources of conflict among civil servants in Papua New Guinea, generating friction and “malfeasance” in the administrations and ultimately hindering the relocation process because of poor governance.

In a 2018 interview, Tracy Mann, director of the international NGO Climate Wise Women, said: “There has never been, nor do I expect in the near future, any government will to support real relocation for the Carteret Islands.”

The autonomous government did make a few relocation attempts in 1984 and 1997, but poor planning and a lack of resources contributed to their failure. Local communities now have little trust in their governments, which they perceive as an “alien external force.” Most political authority lies with the Council of Elders, an official local governing authority in Papua New Guinea.

Fed up with waiting, the Council of Elders created a local NGO, Tulele Peisa (“Sailing the waves on our own”), in 2007 with the aim to overcome the state’s inability to protect them.

In 2009, Tulele Peisa released a plan to relocate 1,700 islanders to Bougainville Island, some 83 kilometres from the Carteret Islands. But political, financial and land-related issues have hindered their progress. The project could cost an estimated US$5.3 million, and with limited help from the provincial and federal governments, Tulele Peisa is struggling.

“You have a bunch of Melanesian politicians who don’t really care all that much about the islanders, with a culture of corruption, a limited land base, and you see that it’s a lot of obstacles in the way of viable resettlement,” Scott Leckie, founder and director of the Geneva-based NGO Displacement Solutions and one of Tulele Peisa’s international partners, told me in 2018.

“The sad brutal truth of this situation: it is hard, it is expensive and it is daunting,” he said.

Ursula Rakova, leader of Tulele Peisa, speaks about the disruption of climate change and the Carteret Islands resettlement program.

Ursula Rakova, who leads Tulele Peisa, has accused the country’s civil servants of embezzling US$615,000 of government funding meant for the organization. “There seems to be a complete disregard for public services for the people,” said Mann, the NGO’s director.

Adding to a difficult political situation is the challenge of finding land in the Pacific Ocean. Not only is it limited, but customary ownership is prominent in the region — up to 97 per cent of the land in Papua New Guinea can’t be bought or sold.

As they race against the climate change clock, the question now is: Will they be able to finish their planned relocation in time?

This story of resilience and determination highlights the specific challenges facing Pacific nations in their fight against climate change and their possible migrations. As this case illustrates, the difficulties arising from political struggles and state weakness have a real impact on the unfolding of planned relocation.

Before speaking of climate refugees, it is important we understand the challenges these vulnerable communities are facing. Far from wishing to seek asylum elsewhere, they are fighting for their land.

We need to question the efficacy of the international system and of domestic governance in granting them the level of dignity and resilience they deserve. Decision-makers and organizations must learn that the consequences of climate change are deeply human.