On Monday Albertans living around the oil-service city of Red Deer, got an early morning wake-up call – a 4.6 earthquake.

Vesta Energy, a privately owned oil and gas company, halted its fracking operations west of the city after the company most likely triggered the quake that temporarily shut down power to nearly 5,000 residents.

It was one of the largest recorded tremors ever to shake central Alberta.

A day later, Mar. 5, the provincial energy regulator ordered the company to suspend fracking operations and report all seismic data for the last three months.

The order announced the regulator was suspending operations at the well site “in order to protect the public and the environment.” Among the harms fracking induced earthquakes can cause are “adverse effects to the environment, public safety and property damage and/or loss,” said the order.

“Sounds like I just experienced my first earthquake in Red Deer… thought I was in a horror movie when my room started shaking in the black of night,” tweeted another resident.

Red Deer optician Melissa Hall tweeted: “HOLY EFF… did we just have an #earthquake?? My bed just shook like it took quarters at a bad motel!”

I thought we agreed we’d do the nasty winters in exchange for no ground shaking.
I want a refund. #Earthquake #RedDeer #WTF #Alberta

Meanwhile residents of Sichuan province in southwest China marched and grieved after a swarm of industry-triggered earthquakes rocked that shale gas basin on February 25.

One fracked well set off a cluster of earthquakes with magnitudes as high as 4.9 that killed two people said one report, and at least four according to another.

In response to the quakes, thousands of angry protestors descended on government offices to demand action.

The government told the protesters it would shut down fracking operations in the region.

Seismic experts have long established that the injection of pressurized fluids into the ground over short or long periods of time can reactivate faults and cause earthquakes.

Sichuan basin, the focus of China’s shale gas fracking industry, is a densely populated area and has a grim history of tremors induced by industrial activity.

One quake triggered by the filling of dam with water, set off a massive earthquake that killed 80,000 people in 2008.

Over the last three years fracking has triggered more than 15,000 earthquakes with magnitudes ranging up to 4.9 primarily in the Zhaotong and Changning shale gas fields of Sichuan. 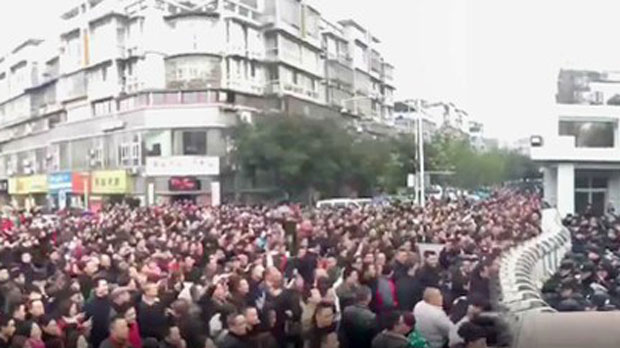 Large crowd pushing against gates of a government building in Sichuan’s Rongxian county, with uniformed officers pushing back, after an earthquake triggered anger about fracking, Feb. 25, 2019. Source: Radio Free Asia.

Canada’s fracking industry has also triggered thousands of tremors in northern B.C. and Alberta over the last decade with magnitudes as great as 4.7.

Among those many quakes due to fracking since 2014, in B.C. alone, 43 were greater than a magnitude of 3.0 and three topped 4.0, according to an Oil and Gas Commission presentation at a Banff scientific conference last October.

Hydraulic fracturing and wastewater disposal in the Montney basin, which will supply B.C.’s proposed liquefied natural industry, has caused most of the events.

In Alberta, quakes caused by the oil and gas industry go back half a century.

In the 1970s the rapid extraction of methane from the Strachan gas field near Rocky Mountain House started to trigger hundreds of earthquakes as the ground fractured and collapsed. Tremors continue to this day as a result of the extraction.

Waste water disposal wells have also triggered earthquakes near Brazeau River since the 1960s and hydraulic fracturing has set off swarms of earthquakes in Fox Creek since 2015.

Canadian researchers now suspect that the volume of fluid being injected into the ground and the pressure existing in the shale formation can all play a role in triggering quakes.

Just last November fracking by the company CRNL triggered a 4.7 earthquake outside of Fort St. John that was widely felt by residents.

Gail Atkinson, one of the country’s leading seismic hazard specialists, confirmed to the Tyee that had that quake occurred in a densely populated area such as Sichuan, China, it would have damaged homes.

Atkinson said that the studies on hydraulic fracturing and earthquake activity in the fracking fields of China provide a warning about the technology.

“It is just another example of how hydraulic fracturing can induce seismicity. It is not just happening in Western Canada and Oklahoma. It can happen anywhere,” she told the Tyee last year.

Scientists can’t say when fracking will cause earthquakes due to a “paucity of validated predictive models to forecast site-specific seismic hazard.”

But the quakes not only pose threats to nearby communities, they can make further fracking more difficult and dangerous. Chinese researchers note that “shallow earthquakes of moderate size” can not only “be destructive” but reactivate pre-existing faults, which then “may hinder hydraulic fracturing and lead to the migration of injected fluid into shallower or deeper formations.”

To date the fracking industry has not been able to develop a hazard model that anticipates where faults are located or how they can be reactivated by fracking activity.

Vesta Energy has been actively fracking Duvernay shale for light oil and condensate near Red Deer for several years.

Unlike most other shale formations this one is located at relatively shallow depths of 2,000 to 2,500 metres.