British oil major BP successfully lobbied the Trump administration to roll back key climate regulations preventing the release of methane into the atmosphere, despite claiming to support the Paris agreement to limit global warming to well below 2C.

An investigation by Unearthed has found that both directly and through its hands-on role in a network of powerful trade associations, BP first opposed and then helped reverse rules that would have prevented the release of millions of tons of methane from US oil and gas operations over the coming years.

The regulations were a fundamental part of the United States’ strategy for reducing its emissions in line with commitments made as part of the Paris climate change agreement.

Scientists have warned that rising levels of methane, which is 34 times more potent a greenhouse gas than carbon dioxide, are one of the biggest threats to global attempts to limit climate change.

The news comes as BP pursues what it calls its first global advertising campaign in a decade, pushing the message that the company is “working harder than ever to create cleaner, greener, smarter energy,” including natural gas.

The company has sought to present itself as a leader on methane reduction, signing an industry pledge to “advocate for sound policy and regulations on methane” and volunteering to reduce the methane intensity of its operations to 0.2%.

But an ongoing investigation by Unearthed into BP and other international oil majors’ efforts to dismantle US environmental regulations has found:

Responding to the findings, Senator Sheldon Whitehouse (D-R.I.), who sits on the US Senate environment committee, told Unearthed:

“In yet another example of corporate doublespeak, BP claims to support limiting wasteful methane leakage and flaring, yet lobbied against a common sense rule to do just that. I wish I could say I was surprised, but I’m not,” the Senator continued.

In the lead up to the 2015 Paris climate change talks, the Obama administration released an ambitious Climate Action Plan, which targeted reductions in carbon emissions from cars and power stations, as well as methane emissions from oil and gas facilities.

The plan underpinned the United States’ emissions reduction pledge for 2025, which it submitted to the UN ahead of the Paris talks.

Janet McCabe, a top official at the Environmental Protection Agency (EPA) during the Obama administration, told Unearthed that the methane rules were fundamental to this strategy: “[the] view was that EPA should focus its attention on the largest emitters of greenhouse gases”

“So it was the cars rule and the Clean Power Plan… the next most impactful was the oil and gas industry and it was because of the methane emissions of course, not because of CO2, and that was why oil and gas came next.”

Methane makes up ten percent of US greenhouse gas emissions and the oil and gas sector is the largest single source of emissions – making it a key target for Obama’s regulations.

The EPA’s proposed rule aimed to make regular inspections of oil and gas drilling sites mandatory, so that companies would detect and repair equipment leaking methane into the atmosphere.

The strategy for tackling methane also included a second major regulation proposed by the Bureau of Land Management (BLM). This aimed to force companies to capture methane from oil and gas operations on federal lands and sell it, rather than vent, flare or leak it into the atmosphere.

BLM estimated that the rule could avoid 175,000-180,000 short tons of methane being emitted per year, roughly equivalent to eliminating the greenhouse gas emissions of 1.2 million cars.

At the same time as the Obama administration was preparing for Paris, the chief executives of ten of the world’s largest oil and gas companies, including BP’s Bob Dudley, established the Oil and Gas Climate Initiative (OGCI) and in October 2015 made a “milestone declaration” to support efforts to limit global warming to 2 degrees.

The new group made “eliminating ‘routine’ flaring and reducing methane emissions” a key focus of its efforts to help tackle climate change.

But in December 2015, less than two months after the OGCI made this declaration, BP’s head of regulatory affairs, Robert Stout Jr., wrote to the EPA to complain that its methane rule would be “very costly and labor-intensive to implement”.

Trade associations funded by BP went further, with the American Petroleum Institute opposing the rule on the grounds that “direct regulation of methane is unlawful”. The Texas Oil & Gas Association filed a petition requesting the EPA reconsider the rule.

BP also targeted the BLM’s restrictions on venting and flaring methane. In April 2016, Stout wrote to the BLM to “respectfully suggest that the best policy course overall would be for the Bureau hold off promulgating additional methane regulations at this stage [sic].”

The twenty-four page submission outlined a number of changes to the rule that could result in additional emissions of methane into the atmosphere, including halving the number of annual leak inspections; limiting them to only sites with the greatest leak potential and weakening restrictions on the venting of methane.

Stout also requested  “further discussions with the Bureau focused on the points raised”.

The EPA and BLM rules were finalized in June 2016 and November 2016 respectively but, following Trump’s inauguration in February 2017, BP renewed its opposition.

Responding to a deregulatory push by the Department of Commerce in March 2017, Stout targeted both methane rules, outlining BP’s view that if an effort in Congress to repeal the BLM rule failed, it should be revoked by the Trump administration.

At the time the company was lobbying Congressional representatives regarding a joint resolution (H.J. Res. 36) to repeal the BLM rule, according to a lobbying report filed by the company with the US Senate.

After the resolution failed, the Trump administration moved to suspend and then rescind the rule.

This decision, which the BLM’s own estimates said will increase methane emissions by 1.78 million tons over a ten year period, was announced in December 2017, a month after BP signed a high profile industry pledge to “advocate for sound methane policies and regulations”.

Stout’s letter to the Commerce department also urged specific changes to the EPA rule, such as delaying compliance by a year.

“climate pollutants are accumulating in the atmosphere, so every year of delay has implications for the situation we’re in where we have greenhouse gases building up.”

“That’s the consequence of delaying and industry often seeks delays, the longer something’s delayed, the less cost for them and, frankly, the more chance that it won’t ever happen,” McCabe continued.

The letter also told the administration it should exempt low-producing oil and gas wells, which industry has argued emit much lower levels of methane.

McCabe defended their original inclusion in the rule:

“there were studies that showed that the low producing wells actually did still emit significant amounts and if they were disregarded or not included in a rule, that those were significant emissions and that there were things to control those emissions.”

“The 2016 rule came down on the side that there’s enough here and there are reasonable things to do and industry, which was pushing back, was of a different view,” she continued. 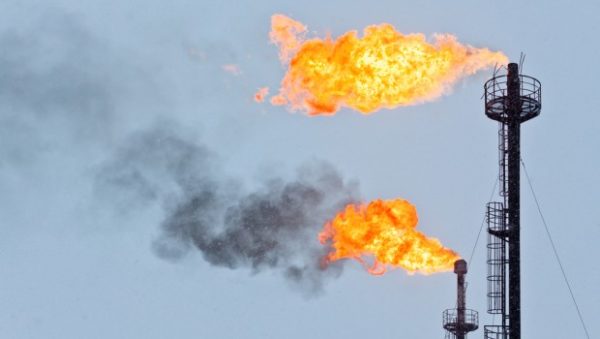 Gas flaring is a common sight in oil and gas fields across the United States, the Obama administration sought to reduce flaring by exploration companies such as BP. Photo: Shutterstock

BP was also actively involved in the American Petroleum Institute’s lobbying on the EPA regulation – attending multiple meetings between the API and the EPA to discuss the powerful trade association’s 2016 petition for reconsideration.

The API lobbied the EPA to halve the frequency of inspections from twice a year to once, exempt oil wells and remove requirements for leak detection plans to be signed off by qualified engineers.

BP attended API meetings with the EPA in August and October 2017 and March 2018, with documents revealing that key points of contention such as the frequency of inspections and low production wells were on the agenda.

Shell and Exxon Mobil also attended meetings, although both companies have recently outlined positions on methane regulation that are at odds with API policy.

API was ultimately successful in persuading the Trump administration to reduce the number of mandatory inspections, amongst a raft of other rollbacks.

EPA’s analysis of its proposed changes found they would increase methane emissions by up to 480,000 tons in the years 2019-2025.

Combined with the estimated increase in emissions from the BLM rule, this could see an additional 1.7 million tons of methane released into the atmosphere between 2019 and 2025, equivalent to 58 million tons of carbon dioxide.

Analysis by the Environmental Defence Fund however, found that the US government is significantly underestimating the scale of additional methane emissions resulting from the rule changes.

Based on a study of emissions data from over 1,000 well sites, EDF found that the EPA rule change could see a total of 1.1 million tons of methane enter the atmosphere up to 2025 alone. Combined with the BLM rule this would mean 2.3 million tons of additional methane emissions, equivalent to 81 million tons of carbon dioxide.

BP has previously argued that its views are not necessarily aligned with all of the positions held by its trade associations.

But Unearthed has found that the company is closely involved in the work of the API, including on advocacy and policy related to oil and gas drilling.

BP head of regulatory affairs, Robert Stout Jr., lists his leadership of “BP’s advocacy efforts through the American Petroleum Institute (API) and other trade groups” amongst four responsibilities on his Linkedin profile.

BP’s regional president for the Gulf of Mexico and Canada, Starlee Sykes, reportedly sits on the API’s Upstream Committee, which leads on regulatory policy and legislative issues related to US oil and gas production.

Adams represented BP at an October 2015 meeting between the EPA and API at which industry sought to challenge aspects of the proposed new standards, including recommending that there be no specified time limit for repairs.

In addition to API, eight other BP-affiliated trade associations have opposed one or both of the methane rules and there is evidence that BP staff are closely involved in the legislative and government affairs work of at least three of these associations.

BP’s government affairs representative in New Mexico between 2016 and 2019, Patrick Killen, sat on the influential New Mexico Oil & Gas Association’s board of directors and co-chaired its legislative affairs committee.

A copy of the charter for NMOGA’s legislative affairs committee from 2012 shows that official NMOGA policy positions are set through the committee and that chairs and co-chairs are responsible for setting the agenda of committee meetings.

NMOGA has been a leading opponent of both the BLM and EPA rules, calling for the former to be revoked and the latter to be significantly weakened.

BP staff have also chaired the legislative affairs and government relations committees of the Texas Independent Producer and Royalty Owners Association and the Petroleum Association of Wyoming, at a time when both groups were lobbying against methane regulations.

Unearthed put all of the allegations in this story to BP, but the company declined to comment.

A BP spokesperson told the FT that the company supported US federal regulation of methane but believed rules should eliminate overlap between government agencies and state authorities and should factor in future technologies to aid detection.

This story also appeared in the Financial Times