The nature of libraries is to provide: to give wide access to books, films, internet, and community. But, beyond this, libraries are increasingly multi-purpose spaces to which vulnerable populations can turn in times of need. They can be places of refuge, somewhere to escape the heat or the cold, all while acting as a source of valuable connection and support. So, when the downtown Buffalo & Erie County Public Library Executive Director Mary Jean Jakubowski and Community Engagement Manager Anne Conable took a closer look at the outdoor space surrounding their home base, they saw the opportunity to reach out beyond the bookshelf and into the community.

The mission of the Buffalo library is to connect their “diverse community with library resources that enrich, enlighten and entertain,” which gains urgency in light of the fact that one in three residents of Buffalo is functionally illiterate. Conable notes that, while certain areas of Buffalo have seen growth in recent years, many still struggle with access to jobs and education. “Right next to the library begins the East Side neighborhood, traditionally an African American neighborhood… which still suffers from vacant lots and urban blight. Literally right next door to the downtown core, where new lofts are going up and new hotels are being built in former office buildings, there are plenty of people who are still struggling with homelessness and joblessness.”

Over the years, Buffalo Library’s large triangle of “front yard” space, once a road and now a designated park, has been primed to become a gathering place for all residents of Buffalo. The library already has extensive connections with local nonprofits and service providers, a boon to its plans to expand its role as an accessible, equitable provider of resources and social services. The Buffalo and Erie County Public Library teamed up with PPS to make the park a place that will provide something for everyone. With the support of a Southwest Airlines Heart of the Community grant, the partners are working to bring the library closer to its community — by bringing all that it has to offer outside. The park is poised to be a public space with a targeted mission to match that of the library, to become a safe haven for all Buffalo residents to learn, grow, create, and organize. In Conable’s words, this is “an amazing opportunity not only to make a dormant space useful and vibrant, but also to extend our resources to the community however we can.” 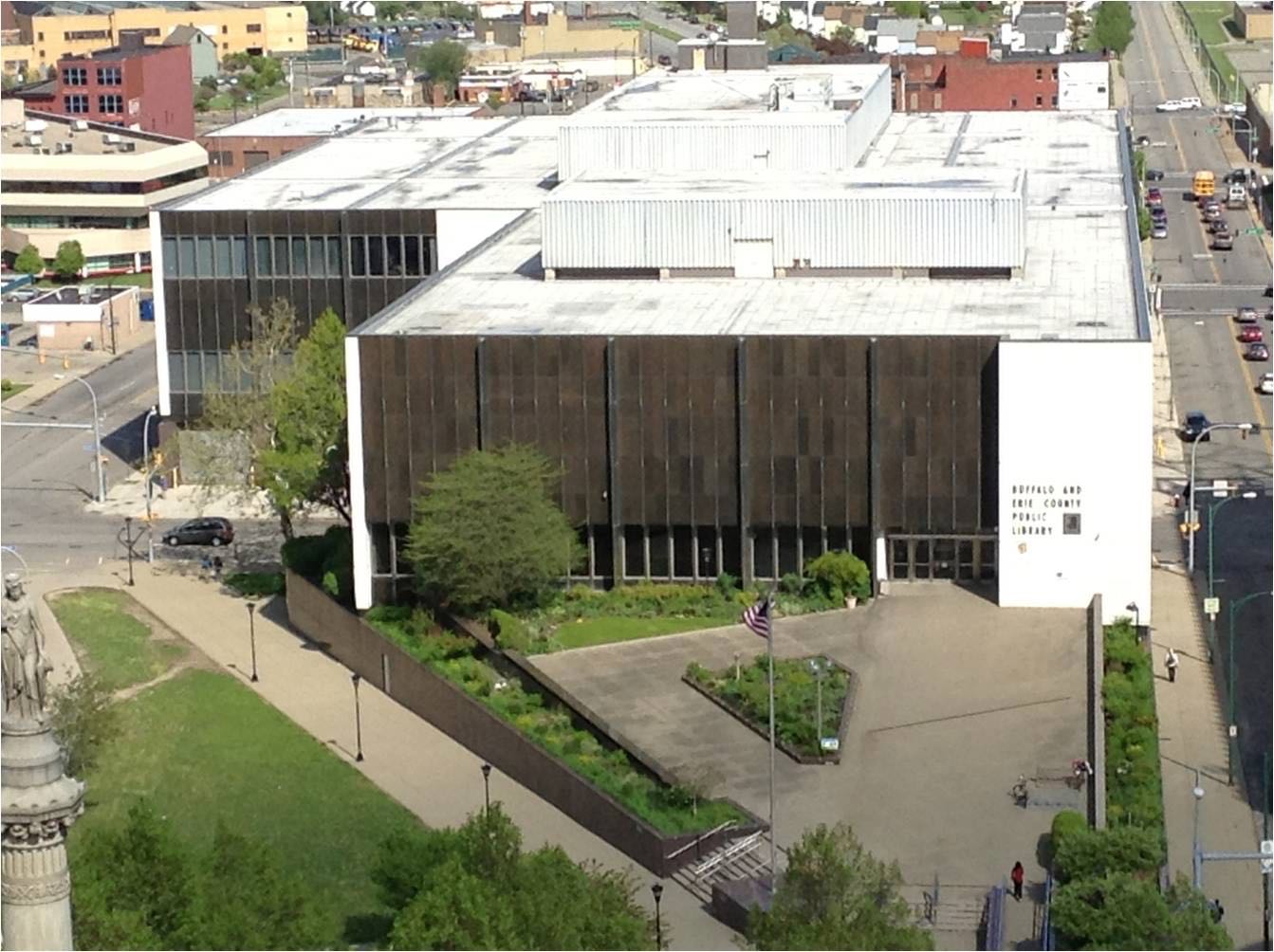 The library had ample outdoor space in its own “front yard.”

The library’s yard was dubbed the Reading Park, and a clear vision for the space soon came into focus — it would be where the library could reach out to Buffalo’s underserved communities, with expanded programming covering everything from literacy to nutrition. “If we can bring library resources outside,” Anne says, “that removes additional barriers, real or perceived.” The partners reached out to the community with interviews, surveys, and visits to shelters and schools, all of which contributed to the power behind the library’s vision. To bring people into the Reading Park, programming would be key — and preferably oriented toward literacy and the arts. The stakeholders hope for the park to provide opportunities to engage with low-income and unhoused Buffalo residents, and to be a multi-generational and diverse public space. Elka Gotfryd, Senior Associate at PPS noted that the space is; “not your typical public space. So many places — especially in downtown areas — are becoming commercialized, and communicate exclusivity in the way they are designed and programmed. This isn’t always intentional, but it happens in cities everywhere. Our partners at the Buffalo Library are being very deliberate in their work, and doing everything they can to ensure that people feel at home, inside and out, no matter who they are or where they come from.” 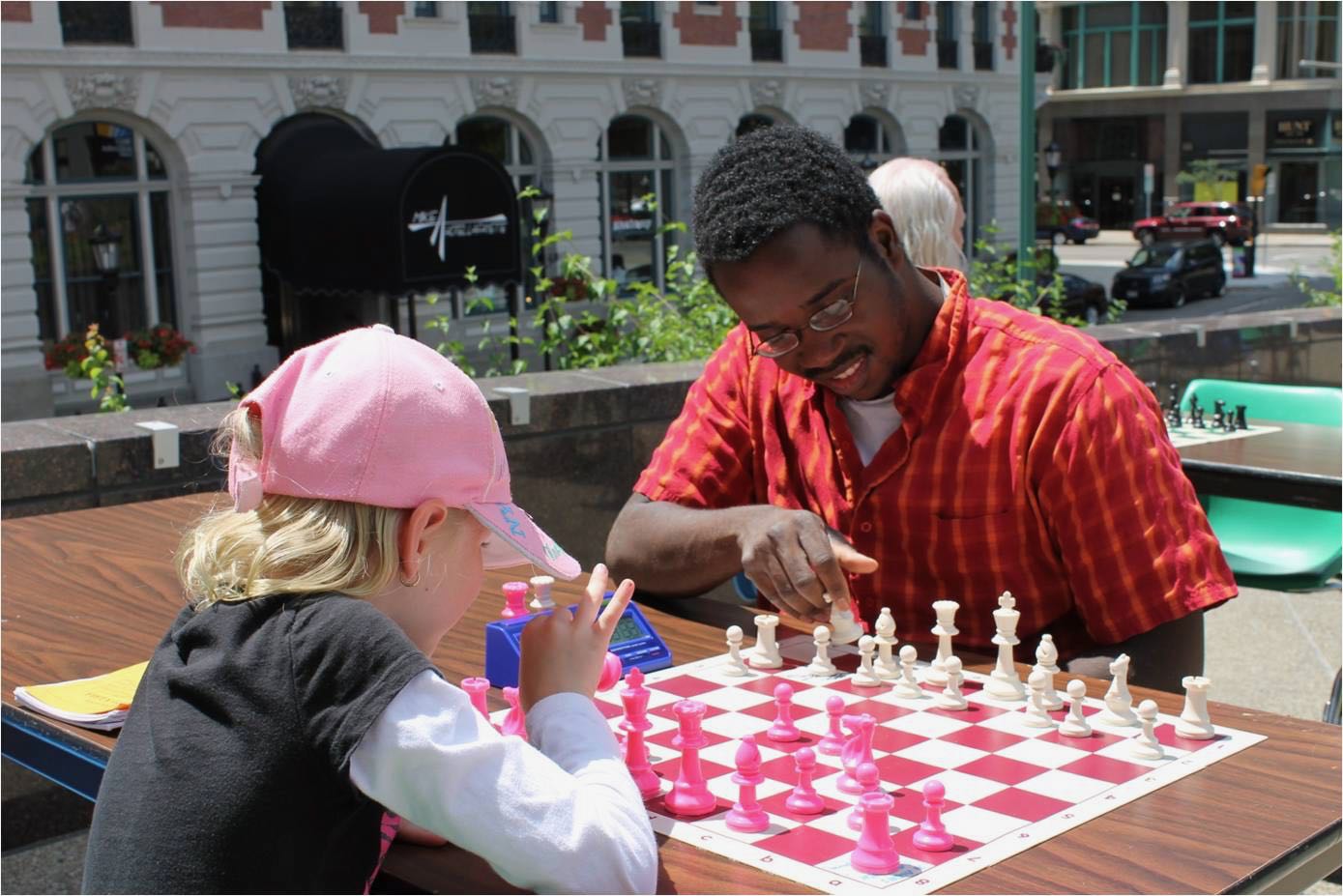 Chess workshops and impromptu games have been an ongoing part of the appeal of the park.

The outreach process led to new ideas for the park to be more comfortable and appealing, including heat lamps for cold Buffalo winters and improved pedestrian infrastructure surrounding the park and leading in to the building itself. Beyond planning for physical improvements to the space, the partners made plans for a mix of new and continued outdoor programming. Just this week, Buffalo’s local Chess Master led a beginner’s session, and the Albright Knox Art Gallery conducted a printmaking workshop. The library’s Launchpad Makers Space also made its way outside in the form of a weekly Makers’ Camp, with participants constructing bottle rockets. Conable notes that such programming is “about reflecting the community, making a vibrant downtown space, about changing perceptions of the library and of the downtown… The space is a wonderful launchpad for all different things that can be done in a new way or an expanded way.” 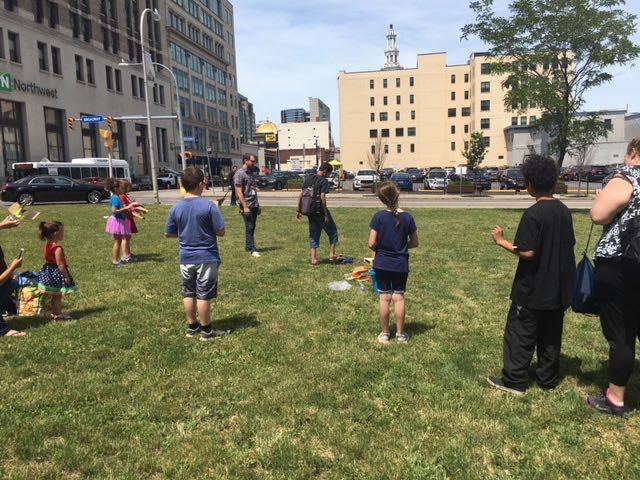 A recent Makers Camp, where participants built their own bottle rockets, took learning outside.

Local organizations were quick to partner with the library, creating plans for new programs in the Reading Park or shedding new light on what they are already doing for the community. Some initiatives will include youth events through the he Salvation Army Youth program, bookmaking with the Book Arts Center, and “Tradition Keepers” storytelling sessions with the Michigan Street African American Heritage Corridor. The library is also working on partnerships with local farmers’ markets and the Cornell Cooperative Extension to plan a new series of nutrition classes. Taking aim at improving literacy rates across Buffalo, many partner events will focus on creative writing, such as an ongoing poetry program and writing center with Just Buffalo. The park is becoming a place curated by the library, but owned by the entire community and acting as a home to local organizations, providing ample room for grassroots organizing, getting together, and reading alike.

The Buffalo & Erie County Public Library has gone beyond opening its doors and its shelves to all of Buffalo. The new Reading Park marks a new page for public spaces in Buffalo; bringing some of the best parts of the library outside, to meet people where they are.