Through an impressive array of data and visual metrics, Steven Pinker’s most recent book, Enlightenment Now, presents a fiercely optimistic portrait of the achievements of the human race.

Pinker uses stats and charts to show how, as one reviewer put it: “Wars are fewer and less severe, homicides are down, racism is in decline, terrorism is a fading fad, democracy rules, communicable diseases and poverty are on their way out.”

Pinker claims that technocratic progress — based upon the ideals of the Enlightenment (science, reason and liberal humanism) — has made humans happier, healthier and less violent than ever before.

His brand of popular science, rooted in the superiority of mankind, seems to appeal to the masses. An experimental psychologist at Harvard University, Pinker has been included in lists like “100 Global Thinkers” by Foreign Policy and “The Top Most Influential People in the World Today” by Time.

Recent critiques have been made of Pinker’s latest work. However, few have explored Pinker’s implicit defence of empire and colonialism: the violent exploits in the name of Eurocentric understandings of “progress.”

I believe Pinker’s mechanical understanding of environmental problems in the age of climate change and massive species loss to be irresponsible. As a postdoctoral scholar of critical socio-ecological theory, I feel it is important to counter the data offered in Enlightenment Now, which aims to demonstrate how our world is less violent, less environmentally destructive and less poor than ever before.

We need to counter Pinker’s view with a broader understanding of what our relationship to nature and to each other has been within the context of Western “progress.”

Rationalizing colonial violence in the name of “progress”

Here, violence should be understood as not only the intent to cause physical harm, but also the more structural intent to dominate others through control or force.

Pinker’s narrative of “progress” roughly reflects that of the European experience of development. This was one constructed on the exploitation of dark-skinned people, the destruction of Indigenous world views and the pillaging of natural and human resources in colonial territories.

Rationalizing “progress” through a fundamental dependency on putting people to work as cheaply as possible and exploiting our natural environment cannot lead to greater emancipation for humanity. Yet Pinker’s techno-optimism, rooted in a humanity that is separate from the non-human world, ironically condones a future of unspeakable violence. 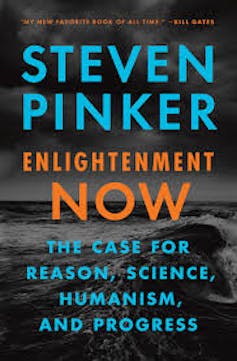 It would be a future of still more arrogant humans believing that they deserve to isolate themselves from the physical realities of dependency on the non-human world. As long as there are “others” somewhere else who can do the dirty work, emancipation (for those who deserve it) can be achieved.

This is no different from what centuries of Eurocentric “progress” has come to mean. Yet according to Pinker, revisiting this tactic makes for a happier world.

Pinker writes: “Industrialization has been good for humanity…including making it easier to end slavery, emancipate women and educate children.”

According to this logic, enslaved Black people and oppressed women were simply awaiting emancipation by their masters of oppression.

In other words, violence could be conveniently minimized whenever it did not threaten the rational pursuit of profit and maintenance of a universal global geopolitical order. If the reduction of exploitation meant improving human rights, well, that was two birds with one stone.

Pinker equates ideas of development, progress, liberation or advancement with a universal essence. This universal approach makes it necessary to speak of all “other” lived experiences in reference to European goals, ideas, values and sensibilities.

For revolutionary philosopher and pan-Africanist Frantz Fanon, freedom means liberation from the racial, sexual and human-nature divisions that have been consciously and unconsciously crafted within Western modernity.

Yet the psychological and physical violence imparted by modernity’s divisive boundary-making between nature and humans, men and women and Black and white, requires us to defend our lived experiences. We must “show the data” to make our experiences valid.

In succumbing to this pressure to somehow prove that our lived experiences “count,” we end up feeding the very same Eurocentric and rationalizing thought patterns that we seek to escape from. Rather than asserting the autonomy of alternate forms of “progress,” we spend time making our voices legible to the colonizers.

Indeed, rationalizing “progress” has resulted in quite the opposite of liberation.

It has emerged instead as a brutal form of assimilation. Rationalizing “progress” consolidates and enhances ways to rule, to own, to possess, to control and to divide and classify the world in new ways.

Ironically, this often occurs in explicit defiance of the myriad ways people and nature continuously resist such attempts.

Pinker looks at “progress” as a linear function of time, measured by a clock. For him, “progress” is nothing but a giant algorithm to solve as our models inevitably become more sophisticated with time. Every passing minute and hour is moving us away from misery and unhappiness so long as we continue to solve the equation.

From this view, experience becomes Instagram-able. Life is a series of accumulated snapshots mechanically put together in line with the ticking of the clock. The past becomes relegated to nostalgia, while the possibility of the future is denied and substituted as a competitive race to forever create, consume, accumulate and discard the waste.

Pinker claims in Enlightenment Now: “An average person of 1910, if he or she had entered a time machine and materialized today, would be borderline retarded by today’s standards.”

This assumes that society is x per cent more civilized and more technically capable of solving problems now than it was 10 minutes ago.

If we accept Pinker’s techno-optimism for a better future, we must assume that all humans, environments and animals should and increasingly do act in mechanical unison. Understanding the human mind as mechanical means that if all living creatures were more robotic, there would be less violence. If both human nature and the non-human world could only be manipulated as puzzle pieces, life would improve and problems would be solved.

Such a view is much more about the ways humans can violently assert order and control over the world. It is less about any scientific or ethical validation of the merits of a particular form of emancipation.

As history has told us time and again, to conflate human exceptionalism with increasing capacity for control is not only arrogant, but utterly dangerous. Human exceptionalism refers to the idea that human beings are superior to the rest of the living world.

How then can a radical project of decolonization go beyond mechanical thinking and undo the historical rationalization of violence?

Decolonizing “progress” means that knowledge need not be translated, interpreted and assimilated into established Western modes of scholarship.

It means delinking and debunking the parameters and thought structures that define what counts as knowledge and who has the capacity to contribute to knowledge creation.

It means no longer classifying societies as either “developed” or “developing,” according to comparisons with Eurocentric notions of “progress.” It means recognizing that under this view, development has meant (and continues to require) the exploitation of humans, the environment and animals through economic imperialism.

A de-escalation of violence is one where the borders, divisions and classifications that embody Western rational “progress” are no longer sufficient to explain what it means to be human.

As Hamid Dabashi, prof. of Iranian studies at Columbia University, and author of Can Non-Europeans Think? writes:

“There is a direct and unmediated structural link between an empire…and the presumed universality of a thinker thinking in the bosom of that empire.”