Interview with Ricardo Mayor on the role of designers and architects crafting our social tissue. We explore how the tiny house model was adapted to respond to the current refugee crisis. From how new production models can empower citizens and change our relationship with refugees, to ultimately changing the way we design cities.

We are all familiar with the current refugee crisis. Images of camps, temporary settlements and people living in the streets of big cities have become ordinary. We all know there is a problem,  that cities are incapable -or unwilling- to deal with it. But what if we could design a solution that not only offers refugees decent living conditions but helps us to connect and improve our relationship with them?

French and Spanish architecture firms Quatorze and D.A.T Pangea took on the challenge. The result is In My Backyard (IMBY), an initiative that builds tiny houses to temporarily install in people’s backyards to host refugees. We discussed with the architect behind the IMBY project from D.A.T Pangea and speaker at the Ouishare Fest Barcelona 2017 Ricardo Mayor, to understand how tiny houses can change more than just our backyards.

Architects and urban planners have a huge responsibility designing the places we live, ultimately changing our interactions and social tissue. in your experience,  how can we design cities – and all that is in them- to foster a more just and collaborative society?

It’s not an easy question. I would say that any construction project has to start by thinking and considering throughout the production process the users. With IMBY we wanted to answer the question of how, starting from design and production methods, we could build a house that could foster social integration and civic engagement in a sustainable model. And this can only be done by empowering the people.

The key part for me is providing a method that can be easily adopted by the final users. For example, I am now collaborating on the work for a social housing project in Alicante and a system to install ephemeral markets in Barcelona, Spain. For me, the core challenge is to develop ideas and manufacturing techniques that people can adopt to improve their buildings by themselves. Because when you are part of the process you feel more committed and invested and results will be infinitely better than when they are simply imposed and given in a paternalistic way. Only when a project is designed to be participatory and collaborative people develop a certain attachment, so not only these projects are more likely to be made, but they actually work because they satisfy real needs.

Ultimately, is about the “death of the Architect” as this imposing power figure. We need to break free from the French Académie des Beaux-Arts concept that only the most talented people can understand how to design. Back then it was used by monarchs like Louis XIV as a power tool for imposing certain feelings upon his subjects. This role of the profession has been one of the major reasons for the housing and urban crisis of the last years.

And it all comes down to education. We need to start by training and teaching. Nowadays this is one of the core premise of the Maker Culture and the Fablabs. We need to completely change the traditional Western/European education system based on question-answer by a model of action-reaction. Inside a fablab you don’t ask questions, you make things, and this really changes how people learn and think about their world and the possibility of making new things in it. 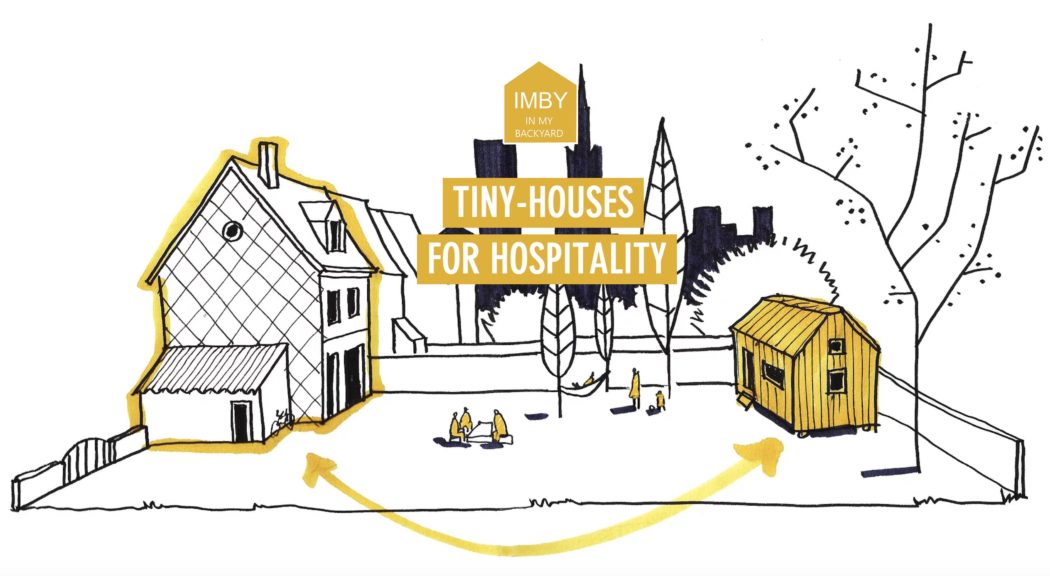 What was the biggest challenge while developing the concept of imby and building the first prototype?

For us, the biggest challenge was making a design that could facilitate the user empowerment I mentioned. To create an economic, production and social integration model that worked. The project was born when Romain Minod, director of Quatorze, and I were discussing ideas about second houses implanted in existing houses in our city, a conversation that coincided with the massive boom and influx of refugees.

Our biggest concern and goal was to design a model that was not only profitable for us, but for our society. Basically, what can designers and other creatives do to help cities adapt to increasing social needs? And this was a question I had been asking myself and my colleagues since 2013. When you are developing a collaborative project you need to find the ideas that people really need and work for them, contrary to when you are working on a project from the current market perspective. That’s why fab labs are starting to work well because anyone can develop a project that satisfies their real needs.

Now that the prototyping phase in imby is over and has succeeded, what is in your opinion, a successful business model for this kind of projects to be widely deployed?

If you are talking about money, it is exactly the question I have most heard in the last two years. Some people believe that there is no economic model behind IMBY, but of course, there is a model behind it.

However, nowadays my professional ambitions go beyond creating a business model. I believe that true development and innovation should also take into account other parameters. If we really want to make Design and Architecture a self-sufficient, sustainable and profitable tool for our society, we must redefine the pillars of the profession in relation to the new systems of information, technology and manufacturing in our contemporary society. Otherwise, based on my experience from the past ten years, the profession of Architects and Designers will disappear, or it will be simply something within the reach of very few.

I believe in a working model closer to the data and development models of open-source products. Why? Because we want to give the opportunity of making projects to everyone who needs them and wants to. When people see that a project like IMBY works and that is beneficial for society, it inspires other initiatives and ultimately spreads to a more collaborative vision of design and society.

We must start to think in a hyper-connected network model, where we can share knowledge almost in real time and benefit from new techniques to develop our projects and ideas. Based on the FabCity model, we created a sustainable model that takes production locally. Thanks to fab labs and makerspaces almost everywhere around the world, there are places to develop projects like this more easily. And when you are building things that people actually want, the business model is pretty self-explanatory.

Refugee camps are proven to be horrible for both cities and the people living in them. do you think it would be possible that governments or bigger ngos and international organisations to adopt the tiny-house model you’ve built as a solution? or should it stay as an open-source citizen-led initiative?

Yes, I think this project could be widely adopted by governments or other institutions. The only problem is embedded in how our current market and those political bodies work.

Collaborative models are hardly integrated into these organisations, so is currently difficult for them to understand the fundamental principles of how the project should be implemented. But all changes when the system is beneficial for local actors. IMBY is not only a solution to the refugee crisis. It is a new model to think, design and build our spaces. Architecture should be above all, invested in the interest of society.

By including the refugees in the construction process, the project gives them agency and a better chance to integrate into the host society. could this model be adapted to other types of buildings, like mobile shops, etc that refugees need?

We started by saying that refugee camps are not useful to our societies. Why? Because by implementing a rather easy production system to deploy thousands of tents with no formal regulation, control or maintenance by authorities, these spaces end up being horrible places to live and detrimental to both cities and the people living in them.

Design is about people, including refugees or asylum seekers. Moreover, haven’t we learned anything from last years? Many housing developments in Europe are deserted because poor business management during the years before the crisis focussed on unsustainable and frequently unjustified construction that has left us with uninhabited ghost cities. These segregated spaces are in complete opposition to proper city development and social integration models. We wanted to integrate refugees directly into our cities and therefore our societies, not only because it can prevent other problems, but it also helps the local economy.

So why not making shops or any other type of building? Because these already exist! One of the key aspects of IMBY is to develop architecture solutions in a dense city. Our cities don’t need ‘special refugee shops’, we already have shops in our cities. We shouldn’t and really don’t need to create more for them, just help them integrate into our existing infrastructures.

IMBY is using tiny houses to change our relationship with refugees. Have you planned to expand it to other members of society that need it?

The reason why we started with refugees was that it fitted with the social context. At that moment, middle of 2015 approximately, we saw that the French NGO Singa started an amazing application called CALM – Comment à la maison – to find volunteers wanting to host refugees. This encouraged us to start studying the Tiny House market as a way to enter into the local hosting concept.

A lot of people wondered why we chose to implement the Tiny House model in Europe, where the connotations are rather negative, contrary to the stylish overtones it has in North America. We were actually inspired by the ideas behind Marcel Duchamp’s creative choices from the “ready made” movement, where he used mass-produced objects in his pieces, redefining their meaning as works of art. We wanted to prove how we could also radically change the meaning and value attached to the design of the tiny house.

The IMBY model was not made only for refugees, it can be used for anyone that needs it. And that’s the most important part of the project. Developing ever more projects that are capable to respond to social needs, that offer a complimentary service to institutions such as social integration and psychological help for vulnerable members of society.

By implementing and investing in these type of projects, we are actually preventing social problems in the future and contributing to a more just and collaborative society. It also offers the opportunity to start using new techniques of innovative design in our society.

IMBY was never about selling houses. IMBY is about developing a data-driven user interface that accounts for the city and social needs. What motivated us is being able to empower people and change the old paradigm of design and architecture. This is why for the moment,  I’m no longer designing buildings in an office for people that I will never know, I am instead helping to create and foster integrated communities by empowering its users and citizens.

Want to see how they set up their first tiny house in France?

Check out their video: