This is the fifth and final blog from guest editor Kate Duva of of Prosocial Power.

In a world that’s been increasingly paved over and privatized, it can be hard to find open places and spaces to gather. As Lucy Gomez-Feliciano of Logan Square Neighborhood Association says, many grassroots collectives have to operate as a “road show” – occupying whatever living room, church basement, library or community center they can find– or heading outside to organize. Here are some intergenerational groups in Chicago and beyond who occupy sidewalks, streets, public parks, and abandoned lots, meeting people right where they’re at, instead of waiting for people to come to them.

Mothers Against Senseless Killing (MASK): An Army of Moms – and a Cookout Every Night

One summer night in 2014, Lucille Burns, a 34-year-old mother, was shot and killed while trying to break up a fight. Tamar Manasseh, a mother of two who had already seen too much gun violence in her Chicago neighborhood of Englewood, was devastated. Then she sprang into action.

As she wrote in her recent op-ed for Truthout, “I didn’t know what I was going to do. I had a theory, though: If enough adults, mainly moms, sat outside in lawn chairs and eye-catching shirts, violence would cease. I knew how much my own teenagers hated to be watched and how different their behavior was when they were, so I figured all teenagers would pretty much react the same way to supervision. So, I started my project: Mothers Against Senseless Killings. Every evening, we set up our lawn chairs and a barbecue grill on the block where that shooting took place — a block that had also seen high levels of gun violence in the past. We fed not only the bodies of the people in the community, but also their souls.” 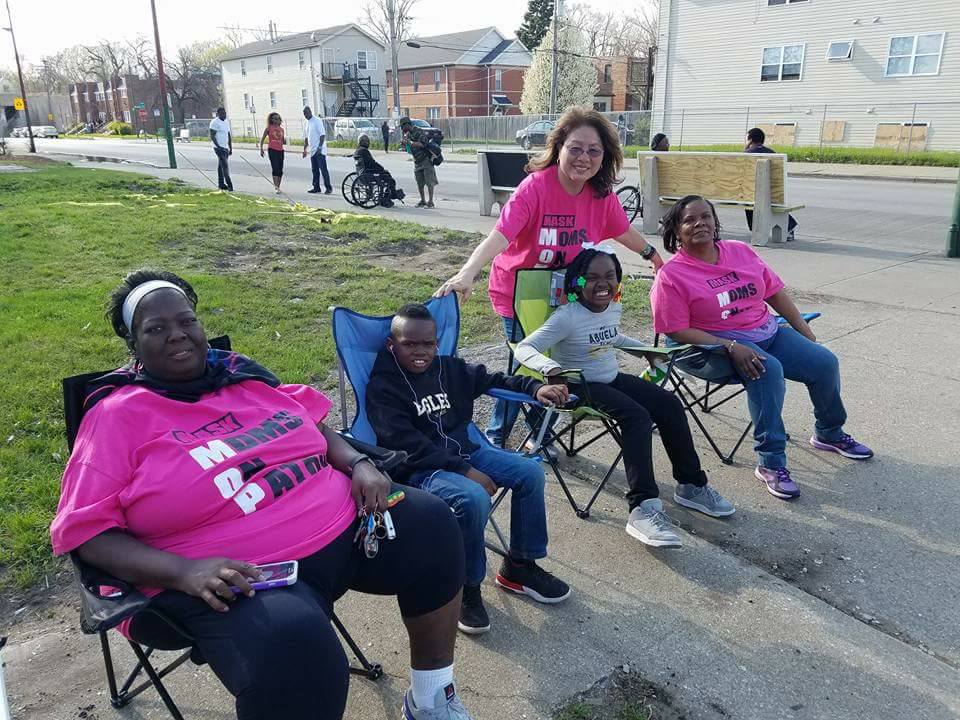 Hanging out on the block, at 75th and Stewart in Chicago

In the three years since MASK was formed, not a single act of violence has taken place on their block – not even a fistfight. Volunteers sign up to feed the block every summer night, and special events draw crowds to the corner, like the MASK Back-to-School Block Party with backpack giveaways, DJs, barbers, braiders, face painters, and tattoo removal services. Manasseh’s army of moms, men, and youth take on larger efforts to wipe out gun violence, police brutality, and poverty in Chicago and beyond, but their basic mission is simple: get out there and be with people on the block. They’ve inspired new MASK chapters in Evansville, Indiana, Memphis, Tennessee, and Staten Island, New York. Follow MASK on Facebook, find their website, and find out how you can support them with your donations, time and talent. 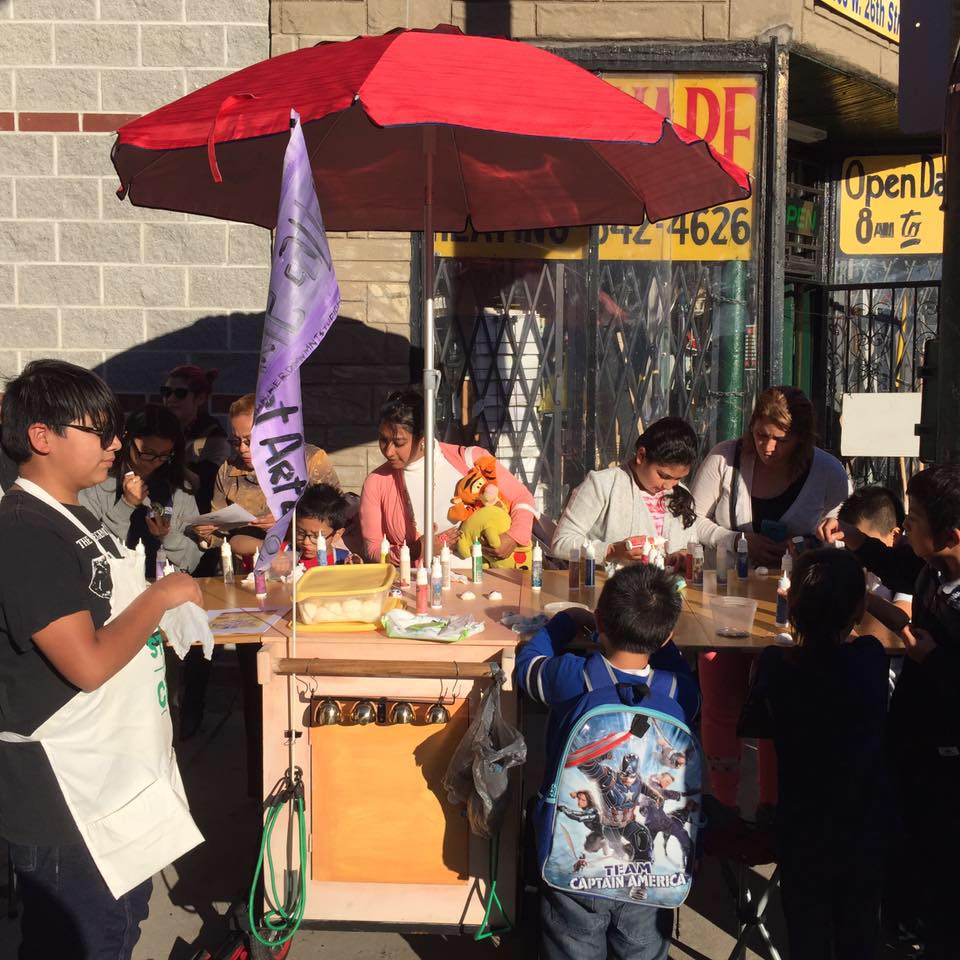 William works with Chicago ACT Collective, a group of socially and politically engaged artists whose many community projects have included participating in 2016 in Freedom Square – a people’s occupation of a lot adjacent to Homan Square, a police department “black site” notorious for illegal detention and torture. For 41 days, 24 hours a day, this “laboratory for the politics of abolition,” as #LetUsBreathe Collective called it, organized tent camping, a free store and library, food, political education and art projects. 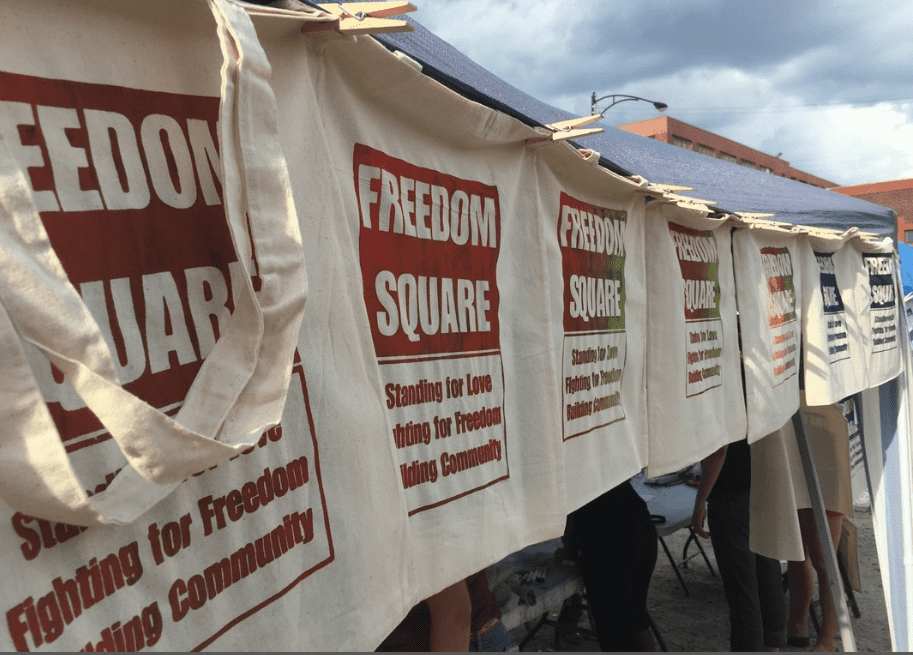 Chicago ACT Collective responded to the hateful rhetoric of the 2016 presidential election with a remarkable variety of sanctuary posters, including versions in English and Spanish, and blank versions that you can customize; download them here.

The Sister Survivor Project: OWN THE BLOCK 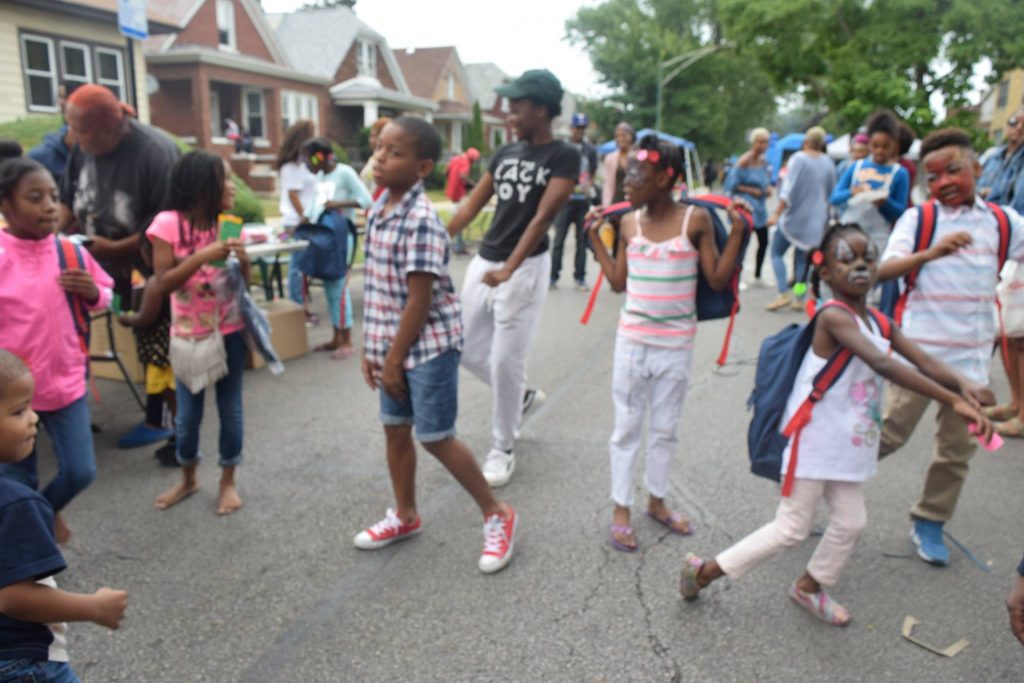 Through arts and education events, court support, and care packages for black women and girls who are survivors of carceral trauma, The Sister Survivor Project, as Chicago raptivist and organizer Bella Bahhs puts it, practices “seditious compassion in the face of America’s addiction to incarceration and violence.” Their Own the Block Back-to-School Block Party in August 2017 celebrated healing and resilience, envisioning opportunities for young people to earn book bags and other prizes by participating in an open mic, meditation and other healing stations, and intentional interactive games like the 3-Legged Race (“Stressing the importance of interconnectivity), Limbo (“Understanding the wage floor and costs of living”), Ancestors Say (“A ‘Simon Says’ spin-off”) and Energy Circle (“Demonstrating how we pass and transfer energy”). 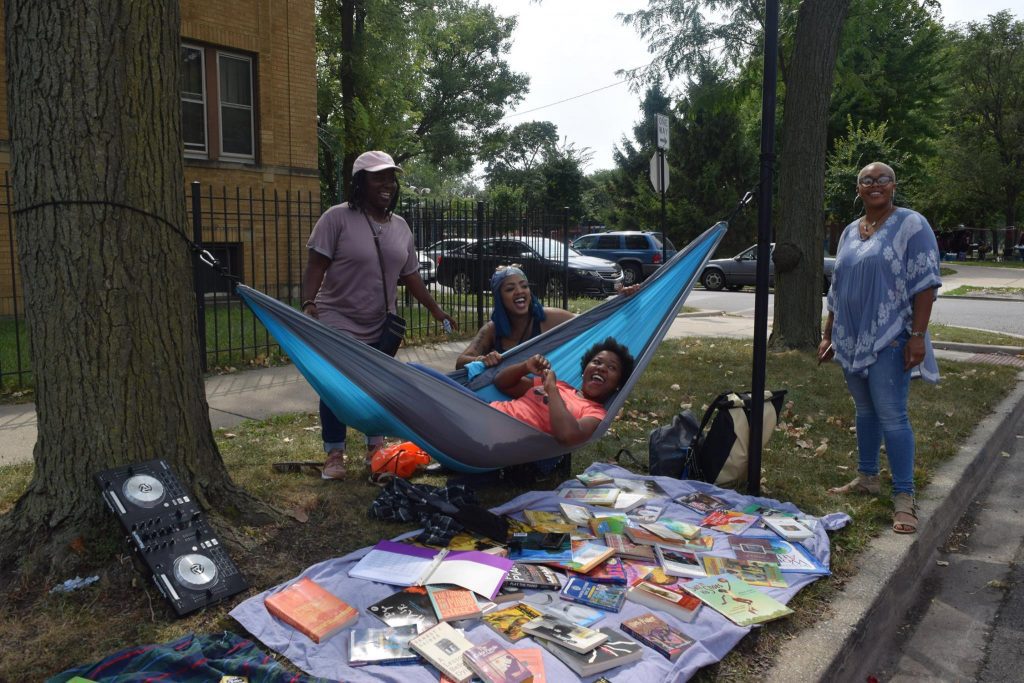 Swinging in a hammock over books at the Own the Block Back-to-School party, summer 2017

You can learn more about The Decarceration Collective and Sister Survivor and make a donation here.

Chicago Childcare Collective, better known as Chi-Chi-Co, is part of an “intergalactic conspiracy of childcare collectives” who provide free childcare for people involved in racial and economic justice movements, with an emphasis on supporting the leadership of women, trans people, and people of color. They provide fun activities for all ages at meetings and workshops, and have supported protests and rallies in the past, forming a “baby bloc” that is inclusive for parents, caregivers, and their children.

Chi-Chi-Co has also teamed up with For the People Artists Collective to create two coloring books about movements for resistance and liberation, Color Me Rising and Color Me Resisting. Check out free pages to download, and buy copies at Women and Children First Bookstore. 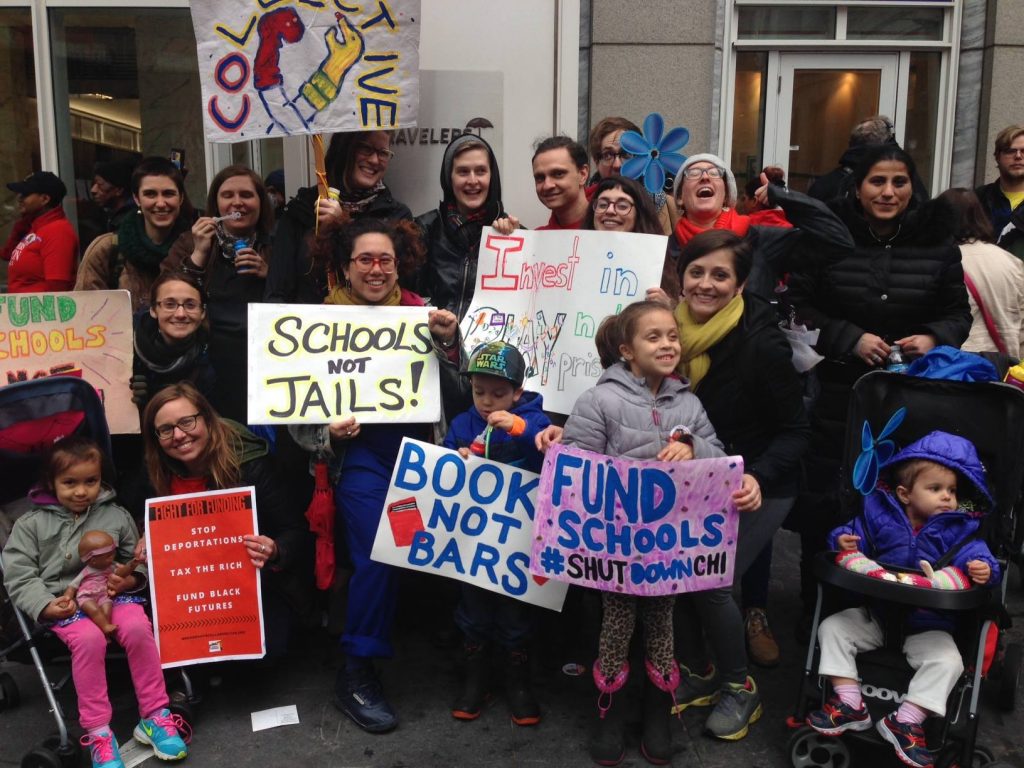 How do you occupy public space?

How do you make your organizing more accessible for people of all ages and abilities?

What are your visions for making public spaces more interactive, more beautiful, and more humane?

Let us know in the comments below!

For more stories about creative collectives who are taking back public space in innovative ways, check out BOOM: The Art of Resistance – A Diversity of Bay Area Anti-Displacement Tactics; Beautiful Solutions, an online gallery and lab space for people working towards a more democratic future; and Willing to Live for Our People, a moving story of visionary organizing led by people as young as seven years old.