In a low-income city in the state of Rio de Janeiro, the socio-environmental NGO Onda Verde has sustained ecological projects and offered professional training to men and women for 23 years.

Located in the Baixada Fluminense, the municipality of Nova Iguaçu has one of the highest rates of criminality in the state of Rio de Janeiro. The municipality is also home to the Tinguá region’s Atlantic Rainforest reserve, an area of high biodiversity, important for the water supply and quality of life of the population. What can be done to protect this forest and improve the life of this community that is so marginalized by public power? With this question in mind, the ecologist Hélio Vanderlei founded the socio-environmental NGO Onda Verde (“Green Wave”) in 1994. “When I started the NGO, I thought: I have to go to Tinguá to protect the rainforest. There are 25,000 hectares there that produce 170 million liters of water per day,” he says.

Vanderlei, the son of a family of migrants from outside of Recife, arrived in Rio at age five, with his mother and four siblings. He sold popsicles and clothing in the streets of Nova Iguaçu during his childhood and adolescence and later worked as an office boy and industrial firefighter. All of this before he became engaged in the defense of workers’ rights and in the protection of the environment with the creation of Onda Verde. The project, in its 23 years of existence, has seen the involvement of over 100,000 people, engaging in the planting of a million trees, in addition to promoting environmental education, facilitating research at its library and offering courses to a community with very little access to information. “Eco-socialism, for me, has this focus on community work. For this reason, we have a center for environmental education, and not one of the rooms have air conditioning,” he says.

Environmental rehabilitation and quality of life

As part of the project, the replanting of seedlings of native species in the Atlantic Rainforest has resulted in the rehabilitation of rivers like the Ana Felícia, which today has clean water, and for the return of fauna that had disappeared from the region, in addition to having made possible the cultivation of foods like manioc, banana, pumpkin and watermelon. 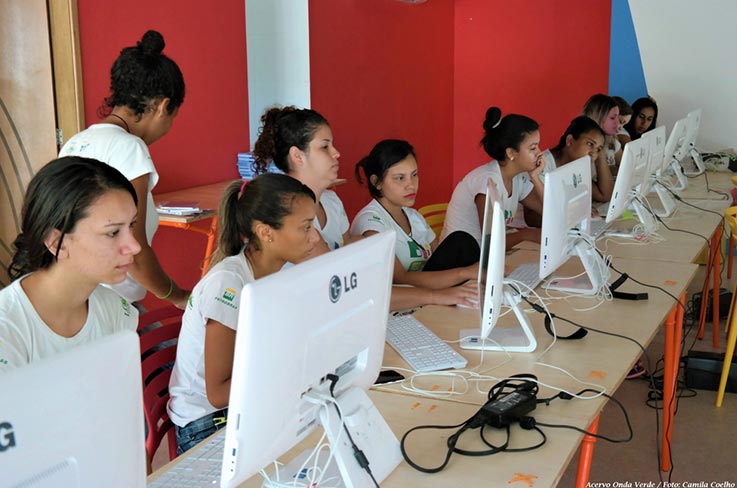 The NGO’s seedling facility provides 100,000 tree seedlings that are planted annually. Of the twelve people working on the project, eleven are from the region. Among them are Benedito Gonçalves dos Santos, age 48, and Wallace Mendes Coelho, 24. For Santos, the improvements to the headwaters in the region are visible: “Almost all of the water was drying up and now it’s coming up again.” A result that affects the whole community. “Almost nobody does this in the Baixada. No one plants trees here,” Coelho reiterates, who got his first job at Onda Verde as a regular employee.

Always concerned about maximizing the sustainable use in the NGO’s constructions, Vanderlei erected the Center for Ecological Studies and Creative Economy in 2015. Like the Center for Environmental Education built in 1999, styrofoam was used in the interior of the walls – a thermal insulator that reduces the external temperature by nine degrees. In a place as hot as the Baixada, it makes all the difference. The new construction, made of containers, has the capability to reuse rainwater, a biodigester and thermal glass, besides producing wind and solar energy. The energy surplus is delivered to the distribution grid and the value discounted from the NGO’s other electricity accounts.

A building “with a women’s soul”

“The aim of Onda Verde is not to train a photographer or an artisan, but rather, a citizen, a woman who is wholly aware of her rights,” says Vanderlei about the emphasis of the professional training activities oriented toward the female population. A total of 100 youth from Nova Iguaçu and the surrounding area have participated in the nine-month courses.

Tatiane Couto da Silva, age 18, and Lorena Silva Brandão, 19, both residents of the region, take an hour and a half to reach the classes from their homes. Rutted roads, long waits for transportation and the heat as high as 40 degrees Celsius have never been an obstacle. “I noticed here that there was the right to speak, that I have something to say,” Brandão observes. The courses taught by liberal professionals working in diverse areas encourage new ways of thinking and doing things. “You change your own outlook, your environment, your surroundings. Everything is connected,” Silva asserts decidedly.

Hélio Vanderlei, in turn, does not even for a moment abandon his idea of a better world, in spite of financial difficulties the NGO has faced in recent years: “Here at Onda Verde we transform personal dreams into collective dreams and we keep on building together,” he concludes.