For four hours a day, a group of preschool children and their teachers in Washington State head into a forest. Rain, snow, or shine, the children are free to run, play, climb, explore, sit quietly, or play musical instruments. The teachers are there to support children’s natural curiosities and exploration.

“My impetus for starting this type of program was to nurture the bond with nature that children are born with,” says Cedarsong founder Erin Kenny. “This leads to environmental stewardship. People who are disconnected from nature don’t care if the ancient forests are being cut down – they don’t care that the Amazon rainforest is being cut down. It doesn’t affect them.”

Cedarsong takes place on five acres of undeveloped forestland. Parents drop children, ages two to six, off at the trailhead in the morning. The group walks into a camp area where there’s a firepit, buckets, shovels, musical instruments, and magnifying glasses. There are no toys—the children rely on their own creativity. 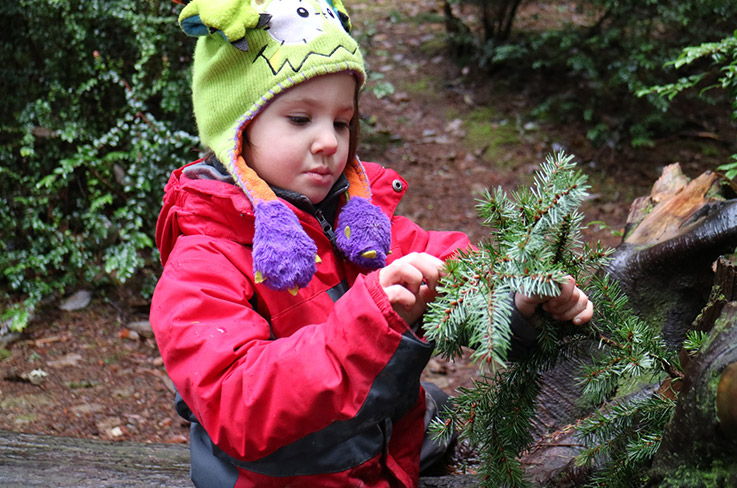 Meeting at the same location day after day, season after season, allows children to bond intimately with the land. They notice when new plants come up and can observe entire lifecycles of species. There’s a picnic shelter and table, a composting toilet, and a storage shed for snacks, extra clothing, and emergency supplies. There is no indoor school space.

“For four hours, we just help the children manage if they’re having any discomfort,” says Kenny. “There’s nowhere to retreat. If they start getting a little shivery, we can just put another layer on them.”

For Elizabeth Fitterer, Cedarsong provided an alternative preschool experience for her family. Her daughter Lorelei always preferred natural materials to plastic toys. When Fitterer saw a poster for Cedarsong, it seemed like a good fit. “As a baby, if Lorelei was upset, I’d take her out into the yard and it would calm her down just to be outside,” she says. “When she started walking, she liked to go on big walks, stomping around in puddles, climbing up small hills, and just exploring.”

Lorelei, now 11, and her younger brother Grant, 8, attended Cedarsong for several years. Her favorite memories include running down the long, straight forest trail, making mud soup, and climbing trees. She also liked the snacks. “We’d have really hot baked potatoes,” she says. “We called them edible hand warmers. That was one of my favorite things ever to do.”

Asked if she thinks other kids should go to a Forest Kindergarten, Lorelei says yes, because it increases awareness about animals and plants. “Kids should learn more about nature,” she says, “so they don’t feel weirded out about things like slugs.”

Fitterer has observed that kids who went through Cedarsong seem to be especially content to play on their own. “They’re not looking for a lot of adult intervention,” she says. “They’re not coming out saying, ‘I’m bored.’ There’s an inner resourcefulness.”

The Evolving History of Forest Kindergartens

Cedarsong is the first Forest Kindergarten in the United States based on the German Waldkindergarten model. It is committed, the website explains, to “total nature immersion, interest-led flow learning, emergent curriculum, place-based focus, inquiry-based teaching style, and authentic play.” This nature immersion is defined as “unstructured free time in nature resulting in an intimate, deep, and personal connection to the natural world.”

“When children go outside, they should have free time to explore nature and be in nature,” says Kenny. “Not only to learn natural science lessons, but to understand that nature is inherently calming and relaxing.”

For children with sensory processing disorders, autism, or diagnosed ADHD, Cedarsong also hosts sensory integration nature camps. Kenny finds the unstructured free time “hugely beneficial” to children who may have a hard time focusing on a project and then, once they do, have a hard time transitioning to something else.

Building on her success with Cedarsong, Kenny developed the Cedarsong Way Teaching Method, which is rooted in a philosophy of no predetermined curriculum. Lessons are driven by children’s interests and by what the natural world presents on any given day. Teachers act as supports to children’s natural curiosity and wonder.

The teacher training program was started nearly five years ago, and educators from numerous countries have now gone through it. “In the beginning, it was almost all educators who intended to start their own Forest Kindergarten,” she says. “Now more teachers who have access to mainstream education programs are able to incorporate some of these ideas.”

This trend is gratifying for Kenny. “I think the movement is only going to continue moving forward,” she says, “if we’re careful to include the public schools, older children, and disadvantaged and urban children.”

This fits with Kenny’s vision for Cedarsong and the teacher training program to raise awareness of the Forest Kindergarten model and spread it to educators everywhere.

“I’d like to see the school continue to be a learning lab that teachers can come to and inform their own practice, or become more empowered and inspired through observing the gold standard in this country,” she says. “Thereby spreading the message outward in a rippling effect and using the ideas and principles in programs around the world.”

How to Create an Outdoor Living Room in Your Neighborhood