Since Donald Trump declared that he was withdrawing the United States from the Paris Agreement, elected officials around the country have been engaged in something they usually try to avoid: serious conversation about climate change. In fact, the leaders of 300-plus U.S. cities and 22 states have now pledged to uphold the goals of the global climate deal.

This unlikely behavior follows a presidential election where climate change received virtually no attention — just 82 seconds during the debates, which was actually an improvement on the 2012 debates. Despite the positive trend of recent weeks, however, climate change is still quite far from being a campaign issue for most politicians. For their part, climate activists have tended to avoid making it one, rallying around specific issues rather than candidates.

One group of climate activists is seeking to change all that. Calling themselves Sunrise Movement, this group — founded by a core team of eight organizers, most under the age of 30 — plan to recruit and train a nonviolent volunteer army, hundreds strong, that will shake up the 2018 midterm elections and make 2020 the first presidential election about climate change. I spoke to co-founder Varshini Prakash about how Sunrise came together, the importance of not choosing between elections and protest, and why climate deniers don’t stand a chance when you are speaking to people’s needs.

How did Sunrise come about?

Back in 2015, a bunch of us were working in different parts of the climate movement. Some of us were leading campus-based fossil fuel divestment campaigns working to stigmatize the fossil fuel industry and revoke its social license to act. Others were figuring out how to build political power in red and purple states. And another set of us were working on place-based extraction or pollution fights. What we all had in common is that we found ourselves asking one question again and again: Are we enough? Are we building the movement we need to stop the climate crisis? Are we getting active participation by the millions? Are we winning? Clearly, the answer was no. So, a group of us coalesced around a singular objective: to build a mass popular movement capable of ending Big Oil’s assault on our climate, economy and democracy. 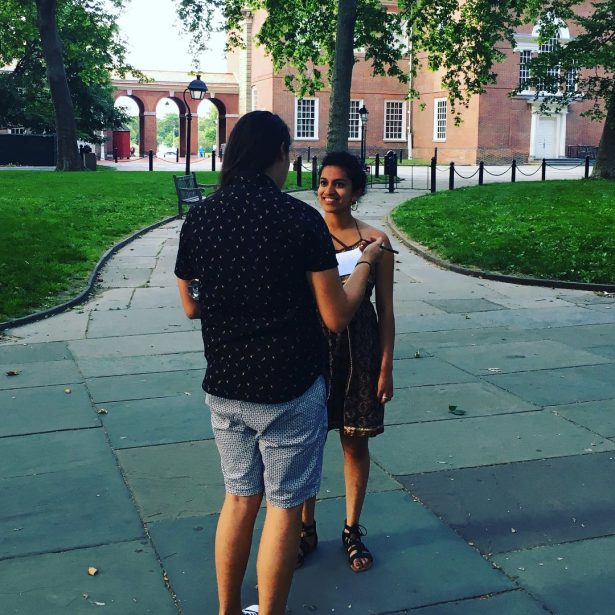 We met several times to figure out the parameters of this new movement, and we were well on our way to having a full plan. And then, in November, the election happened and everything changed. Like most progressives, we had entertained the thought of Donald Trump winning, but never quite got to a place of sitting down and figuring out how the world might look different, and how we would react and respond if he did. We had had a plan to focus on building popular support for climate change, anticipating that a Democratic president would be pushed to take action on climate if a majority of Americans wanted it and made enough noise. But our world had turned upside down, and there was no way that popular opinion and action would push a Republican trifecta government to care about climate change. When the dust settled we came to an important realization: we have to figure out how to win elections.

Have you gained any insights toward that goal?

After reflecting deeply on our wins and losses, we came up with three key principles. First, if we ignore elections and the power that’s on the table, we’ll lose. Second, the gains made through creative protest have been powerful, but they will only be protected if we achieve institutional, political power. And, finally, if we elect people who only care about the climate crisis in name, but are unwilling to stand up to the fossil fuel industry in practice, we’ll also lose. So we must merge electoral organizing with creative protest to build, alongside others, a political force great enough to win.

Sunrise is doing just that. We are building an army of young people to stop climate change and create millions of good-paying jobs in the process. We will make climate change an urgent priority across America, expose the corrupting influence of fossil fuel executives on our democracy, and elect leaders who stand up for the health and well being of all people. We see ourselves as part of a political revolution to make real the promise of a society that works for all of us, not just the 1 percent.

By making elections a focus of your work, you will certainly be filling a gap within the climate movement. Why do you think that gap existed?

For too long we’ve seen the climate movement get totally derailed by four-year election cycles, or experience them as a distant distraction. That’s because many in the climate movement have not really tapped into the deep frustration about how our political system is not responding to and reflecting the concerns of everyday people. Such frustration is especially deep among our generation. We have been losing on climate for the same reasons that we have been losing on healthcare, inequality, education and racial justice — our economy and democracy are rigged in favor of the wealthy and powerful. The climate movement must be part of the emerging political revolution that is taking on the billionaire class from many angles.

That being said, we’re not leaving behind the legacy of nonviolent protest that has won so many things for working people in this country. Marches, demonstrations and sit-ins will be a part of the plan, but so will door-knocking and candidate recruitment.

In what ways are you planning to connect and work with other groups in the climate movement?

The core aspects of our strategy will require us to work with a variety of groups in the climate movement. To build public support, we’ll collaborate with other organizations that are really good at protest and organizing. And we know for sure we can’t win elections on our own, so we plan to link up with others to contest for political power as well.

In the end, we’re ready to work with any group that’s excited about our strategy and aligned with our understanding of how we make change.

My introduction to political advocacy was in the divestment campaign at UMass-Amherst. Divestment campaigning is close to my heart. It’s one of the most effective methods for eroding the power of Big Oil — especially for college students — and we don’t see that changing.

We hope divestment campaigners will join up with Sunrise to translate the people power they’re building through divestment into the political power we’ll need to end Big Oil’s influence in Washington.

Sunrise is also a logical next step for students moving on from divestment campaigning because either they win their campaign (like we did at UMass), leave school or decide it’s no longer the most effective way to build power on their campus.

What are the immediate next steps for Sunrise?

Our strategy follows a simple pattern over the next four years, through the 2020 election: disrupt, vote, disrupt, vote. We’re launching this summer and fall with a series of trainings in 10 politically significant states to build our people power. In August, when our politicians have left the halls of Congress and must answer to us at home, we’ll rally young people across the country to go to their townhalls and events. We want them to ask their representatives what they’re doing to end Big Oil’s assault on our climate, economy and democracy. After that, we’ll be engaging in primary fights between populists and establishment politicians. We’ll be doubling down on bringing in as many new people to the movement as possible and taking action in myriad ways — both domestically and internationally — to spread our message and expose the corrupt entanglement of fossil fuel CEOs and our political system.

All this will feed into our biggest program, which will take place next summer. We’re going to bring together 300 youth for a training that prepares them to spend six months of their lives talking to people and growing our movement up to the 2018 midterms. If we do it right, by November 2018, we’ll see climate as a major issue during the elections and beyond, and we’ll win races to elect climate champions to office. This includes electing a people’s president and Congress in 2020, alongside the many other groups that make up the political revolution.

Were you inspired by any particular models when you built out this plan?

Much of our foundational frameworks for Sunrise came from the Momentum model, which is a hybrid of mass protest and structure-based organizing, as described in Paul and Mark Engler’s book, “This Is an Uprising.” From there, we improvised and pulled together thinking from different parts of the left, especially after the election. We took direction from the Bernie Sanders campaign — specifically its innovations on volunteer-led, decentralized teams and structures. We studied a variety of organizations — from political parties to community groups — that experimented with building on-ramps for mass participation. In the end, it’s a process of experimentation. We’re staying flexible, so that we can do more of what works and stop doing what doesn’t.

Has the approach to climate action changed with Trump’s rejection of the Paris climate deal and his green lighting of the Dakota Access and Keystone XL pipelines?

The last few months have made it clear how critical it is to translate our people power into political power. Our most prominent federal victories from the last eight years have been undone within the first few months of the Trump presidency. It’s clear that social movements cannot afford any longer to be external agents railing against a hostile government that is not accountable or responsible to the majority of Americans. We have to win political power so we can defend our gains permanently and push for further action on climate and beyond.

On a different note, the Paris rollback is galvanizing thousands to action. People are coming out of the woodwork, ready to contribute in any way they can. It’s up to movement leaders to find meaningful and impactful ways for all these people to participate.

What do you make of cities and states going their own way, post-Paris?

This is an important message to send to the world, and we applaud local and state leaders for taking this action. Unfortunately, these commitments only do so much, and we’re still going in the wrong direction overall. The scale and speed of the transition to renewables that we need will require a large-scale mobilization from all parts of society, and the federal government is going to be a critical part of this. We need to get serious about taking back Congress and the White House.

Climate activists have long battled fake news and climate deniers. How are you preparing to deal with them?

When we speak in terms of people’s needs and dreams rather than inanimate carbon-things, deniers don’t stand a chance.

To Cook or Not To Cook: The Question of Polycyclic Aromatic Hydrocarbons

To Cook or Not To Cook: The Question of Acrylamide